It all started with me waking up at 4 am and driving down Alligator Alley from Miami. The plan is to meet Tom, my guide, at the ranch gate at 6:30 am. The ranch is located north of the Florida Panther National Wildlife Refuge with about 10,000 acres of land. I met Tom at the aforementioned time and changed into my hunting clothes. We got set up and talked about a game plan. The plan being to drive his pickup around the ranch and spot a buck at a distance and put a stalk on them. Not five minutes into the hunt, we spotted an 8 point buck. I could not believe it, it was my first time seeing a deer while hunting. Unfortunately, Tom said it was not a mature buck and that we should keep looking. We continued driving around, but our visibility was terrible. We could only see things relatively close by. Nonetheless, we saw multiple groups of does and smaller bucks so I was hopeful we would find a mature buck. 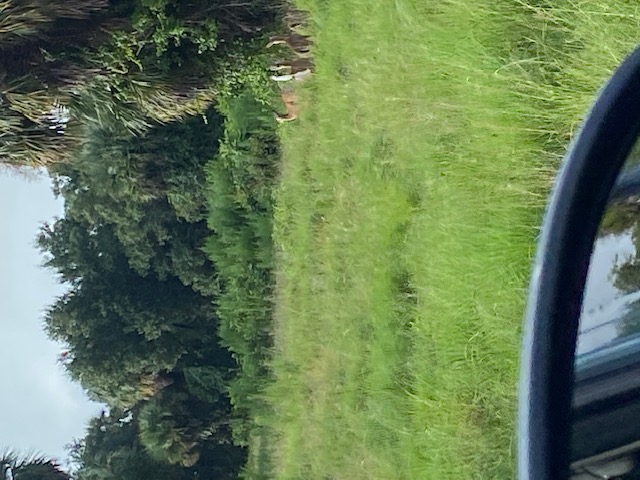 Tom commented on the fog saying that it didn’t make much sense to continue hunting cause we couldn’t see quite far and were most likely spooking bucks. We drove around and glassed deer, but still no shooters were found. About an hour and half in, Tom spotted a mature buck, but it quickly disappeared in the thick jungle like vegetation. It was tough to swallow, but given the environment if a deer gets in that thick cover then they are as good as gone. Given that the fog was so thick, Tom thought it more prudent to head to the lodge and wait for the fog to lift. My spirits were very high after seeing so many deer, much more than I’ve ever seen in New England. In addition to deer, I saw countless Osceola turkeys as well as a 10 foot alligator.

At the lodge Tom took a siesta and I was restless even though I only got 4 hours of sleep the previous night. This was my opportunity to harvest my first deer and I felt like a kid at Christmas. After the afternoon sun dimmed down, we hopped back in the truck and continued our search. After an hour of driving, I noticed a buck feeding in behind a bush and we stopped and glassed him. Tom said he was a mature buck, but he just did not look like the one for me. As the deer fed without a care in the world, I told Tom I wanted to keep looking which I can expect he certainly did not like.

A few hours passed before we saw two bucks off in the distance. This time we found a mature 8 point buck and I was determined to get him. Tom and I made our way closer to him and I shouldered the rifle. I had the deer in my crosshairs and began slowing my breathing down. I squeezed the trigger and was amazed to see the deer still standing his ground. Moments later he turned and fled about 20 yards away. I chambered another round in the rifle and shouldered it only to find that the deer left his position and I couldn’t see him. I was disappointed in myself for missing the shot and I could tell Tom was probably questioning my shooting capabilities. There were only 2 hours left of daylight now and I missed my only opportunity so I thought.

With only 20 or so minutes of daylight left, we spotted another pair of bucks in a field. Tom glassed him up and said that one of them was a very big buck. We left the truck with the sticks and used a palm tree to shield us from the bucks. Once behind the palm, we saw the two bucks making their way away from us but not spooked; just feeding. We were about 100 yards from them now and Tom had me put the rifle on the sticks. Once in position, he whistled and the big buck turned to look back at us. I made sure I had the crosshairs at the right position and squeezed the trigger. Before I could recollect myself and see where the buck went, Tom said “You got him, you got him.” I was so happy that I connected with him that I didn’t see where the buck ran off too, which I learned a valuable lesson from.

The only place the two bucks could have ran off to was a pocket of palm trees. We made our way around that pocket and saw the smaller buck run off into the distance. Tom was fairly certain that our buck was holding up in the pocket and said we should go back to the truck and give it some time. Darkness quickly fell as we waited 45 minutes in his truck. We both reapplied bug spray, myself only on my neck, face, and forearms. Thunder from the distance was lightening up the night every 10 minutes or so. We made our way over to where the shot was made and we could not find a blood trail. Tom was confident that I hit him and we searched the edges of the small palm forest and was not able to find any blood at all. I was beginning to worry that I did not actually hit him but kept my composure.

Tom had me stand at the entrance of a trail to the pocket of palms while he started doing a grid search for the buck. All this time I had gotten swarmed by mosquitos more than I have ever had before in my life. They were attacking my left elbow in particular and I was swatting my hat at them for relief. I persevered through the insect attack determined to retrieve my buck. After about 30 minutes of searching, Tom called out, “Hey! I found your buck!”. My heart was pounding with excitement as I made my way to him using only his flashlight as a guide to make my way to him. I saw my deer on the ground and was amazed to learn that not one drop of blood was spilled. Tom tried to drag him in order to see how heavy he was and commented how this was the heaviest buck that has been taken off the ranch in the 9 years he has been guiding there. (Here is a picture of the result of my tussle with the persistent Florida mosquitos a day after the hunt.)

The next challenge was finding a suitable route for bringing the truck in there given that most of the ranch was flooded with about shin deep water. Once a shallow stretch was found, we got back in the truck and drove to the other side of the pocket of palms. Tom and I both grabbed an antler and dragged the buck to the truck and got him placed in the back. Tom estimated him to be 6-7 years old and about 170 lbs. I was overjoyed to finally have gotten my first deer! After starting hunting 6 years ago and for my first deer to be such a special one as this was just incredible. I was so caught up in the adrenaline of the pursuit that I didn’t know how many points the buck had til after I fired. He is a wonderful 8 pointer that sports thick dark antlers, which I learned from Tom the bucks get from tannic acid when rubbing against cypress trees. 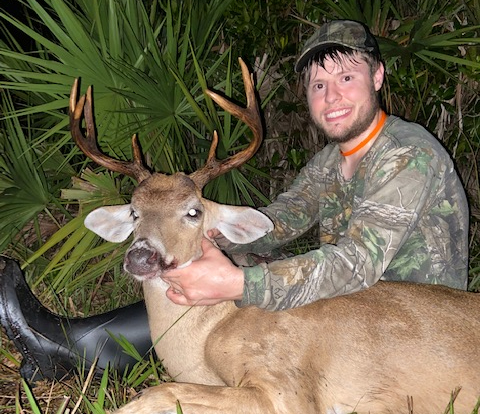 We got the buck back to the processing station and were busy butchering til midnight. The amount of meat he provided was awe inspiring to me as a beginning hunter. I had a cooler full of meat and was very happy. Tom and I took the carcass and dropped it into the pond where it would soon become the food of some appreciative gators. We got back to the lodge and took a well deserved rest. That is the story of my first deer and the culmination to a wonderful adventure. Never in my wildest dreams did I ever think I would hunting in a jungle-like tropical environment like South Florida. The abundance of game at the ranch was amazing and in all I saw approximately 40 deer, 60+ Osceola turkeys, a black bear, and 3 gators, all in a free range unfenced environment. I would describe the ranch as a poor man’s Africa for its beautiful savanna-like landscape and abundance of game and would recommend anyone to hunt with Tom at Everglades Adventures.

As I drove back home on Alligator Alley, I was excited for the many meals to come and for the recollection of the memories of the hunt. I am truly blessed to have been able to get my deer in a spot and stalk fashion given the difficulty of the terrain. For instance, with the ground flooded it was impossible to walk without splashing or making swishing noises. This made pursuing a deer on foot extremely difficult because they could inevitably hear you approaching. After getting the deer processed and trying the tenderloin I was blown away at its wonderful taste and flavor. I cannot wait for my next adventure and I’m so happy I was fortunate to be successful for this one. It was truly a hunt that I will never forget. 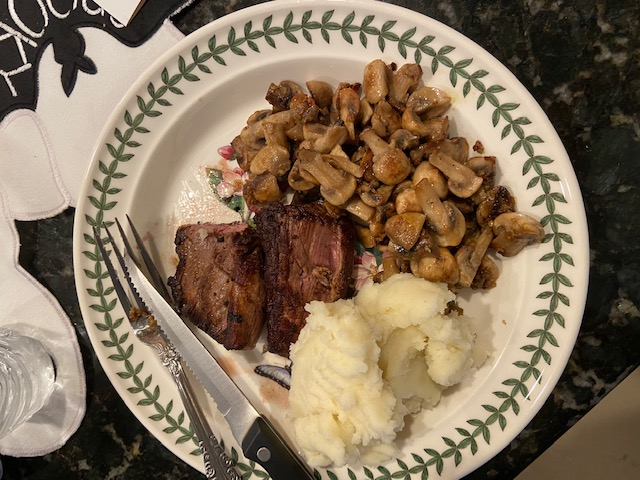 The hunt took place in Collier County and I hope to be back someday!

Maybe next time I tag along

Congrats sir. And that plate photo? I might have to thaw some moose for supper. That looks pretty tasty.

Daktari said:
The hunt took place in Collier County and I hope to be back someday!
Click to expand...

"Laces out, DAN!!!"
Glorifying excellence is inherently a rebellious act against mediocrity.

Nice buck, it is hunts like this one that keeps us coming back for more.

Congratulations on your first buck and a first great hunting report.

Which outfitter did you use?

Outstanding! What an excellent first hunt! Heck that would be an excellent hunt for anyone! May you have many more.
Ouch! Those mosquito bites look awful!
Africa on my mind.

Ridgewalker said:
Outstanding! What an excellent first hunt! Heck that would be an excellent hunt for anyone! May you have many more.
Ouch! Those mosquito bites look awful!
Click to expand...

Yeah my elbow was swollen for almost a week after. However, it was well worth it for the experience!

Hookboy88 said:
Which outfitter did you use?
Click to expand...

Everglades Adventures. If you're looking for a free range Seminole whitetail deer then this is the outfit to go with.

Daktari said:
Yeah my elbow was swollen for almost a week after. However, it was well worth it for the experience!
Click to expand...

FYI - I have a ThermaCell that has a belt clip on it. They're only $25-30, give or take a bit. I have land in Louisiana, I won't go deer hunting without my ThermaCell.

Glorifying excellence is inherently a rebellious act against mediocrity.

Congrats!! You’ll be hooked for life now.
You must log in or register to reply here.