Yes I think I have heard that also about the mane loss. Did you get that monster in Zim or Namib? What a beaut!

Practice your online story telling. Keep it up. I'll attempt to be clearer.
That wool poncho would be great at keeping you warm.
You should cherish that hunt. The fact that you were wearing that poncho adds to the story. That is great.

safarihunter said:
The lion hunt was one of the most exciting. The objective was to get him over bait-eventually after several days we noted he was taking the bait- the problem was- we were never there when that occurred!!! On day 6 we got to the bait and noted he not only took the bait( gemsbok) but also was in our blind -which was nothing more than mopane/ acasia branches, so we waited thinking he may return- he didn't; it was suggested that we come back in the evening and wait him out-so my son, the PH and I sat there all night- in pitch black, freezing our you-know-whats off- but he never returned. We never heard a roar but plenty of snarls and grunts all around us-REALLY!!!! We decided to come back in early am and while waiting we received a call from trackers that they spotted a big male chomping on "something" about a mile behind us. We decided to get in the cruiser and drive to approximately where they spotted him. By the way the also saw some females meandering in the area also.
When we got about 5oo yds from him the tracker on the top of the cruiser spotted him. As you can see the grass is high so it was decided to drive a little farther- the cruiser sounded like a 57 Chevy dragging beer cans, but we actually were able to drive to about 250 yds When we got off the cruiser the tracker yelled for us to get back on- the females were to our right!!! The male was oblivious- just eating-the females scattered to our right, we got off and walked about 25-30 yds closer. My first shot was off the PH's shoulder- he forgot the sticks and the shot was high and just behind the left front shoulder paralyzing him but I assure you he was very much alive when we got up to him. Another shot again behind the left front shoulder finished him. While we were celebrating ,etc the females began to close in- so the PH let off some shots to scatter them- we then took the required photos( govt required) and loaded him up an got out of there quick
Gun: 375HH( Dakota- circa Don Allen) Barnes triple shock 270gr
Weighed 563lb and measured 26 8/16 and scored # 18 in the SCI( it was decided to enter him by the PH because he was so big-I'm not that preoccupied with such things
So I have a nice plaque and am in the record book- How cool!!! As soon as my kids help me figure out how to copy the mount I will include a photo- it's really impressive- That's my story- 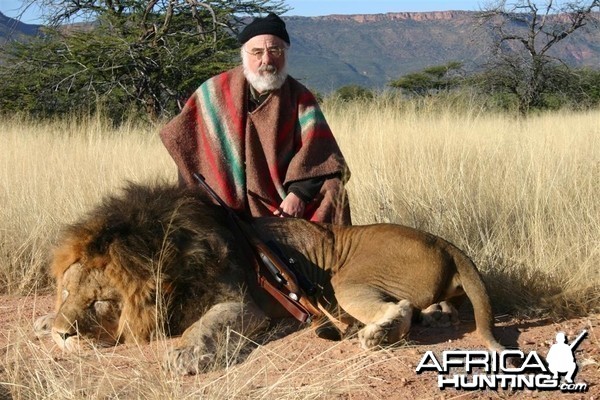 
Great story safarihunter! That takes some brass to go after him on foot with his girlfriends around!!
Last edited by a moderator: Dec 1, 2016

safarihunter, thanks for the story - makes the photo even better! Sounds like some good memories there.

That is one beautiful lion! Congratulations!

Welcome to AH where you will find lost of info.
You must log in or register to reply here.

B
Greetings from a Dreamer of African Dreams!