Thank you for sharing your fantastic adventure and enjoyment of being part of conservation in Africa! I’m excited to see this kudu!

What is a Burian community? I tried to search online but no luck.

Ben, I may have translated this wrong. Sorry, it's a Boer community.
Can you do more with it?
Whats a Kudu against your buffaloes at home

Got it, thank you! Kudu and buffalo are my two favourite animals to hunt and spend time around!

One mighty fine warty!
As an old man, I’m becoming a bit soft about death bellows, springbuck hair falling, kicking after death, etc. Strange these things never bothered me when younger. Maybe it’s one of those things when you start closing in on your final years, or maybe I’ve been around my three generations (4 now with great granddaughters) of ladies and no boys? My wimp years must be closing in! Yikes!
Africa on my mind.

Can feel how much you enjoyed the surroundings.
HUNTERS make importation bans work!

I was on the road for the weekend, so I was late,sorry guys.
Our kudus.
On the 5th hunting day, 2 strong and above all old kudus fell with my friends, with one I myself was present.
After an exciting, but unsuccessful stalk in the morning, we drove off a new area to determine tracks.
There stood like a ghost a strong kudu bull and was at the jump off.
The command fire freely and the shot were almost one and for safety's a second afterwards.
A kudu injured by rival fights on the spine and enormously emaciated came so to the stretch.
You can see from the photos how lean the animal is and our PH meant, two weeks more and he would have died. 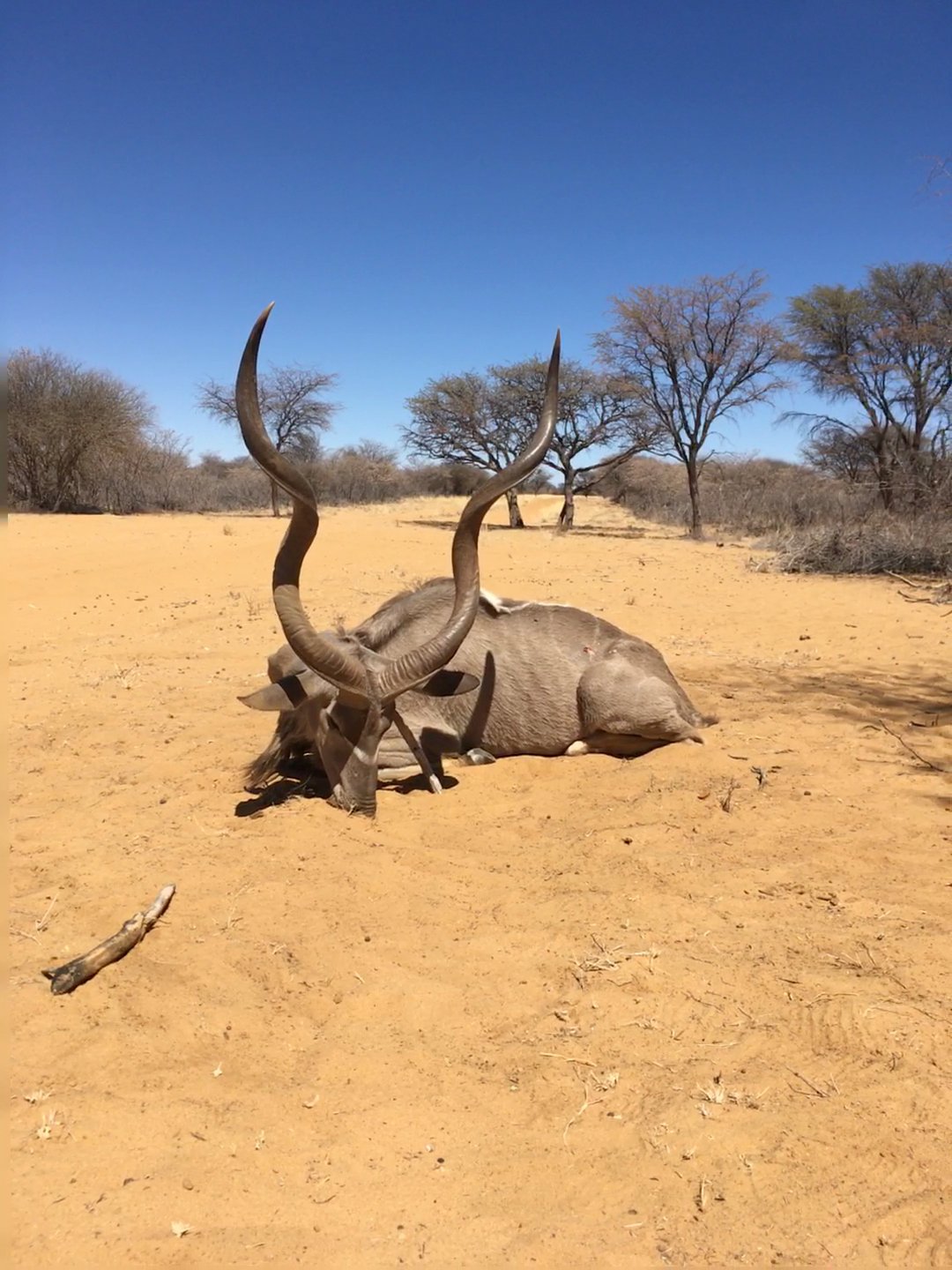 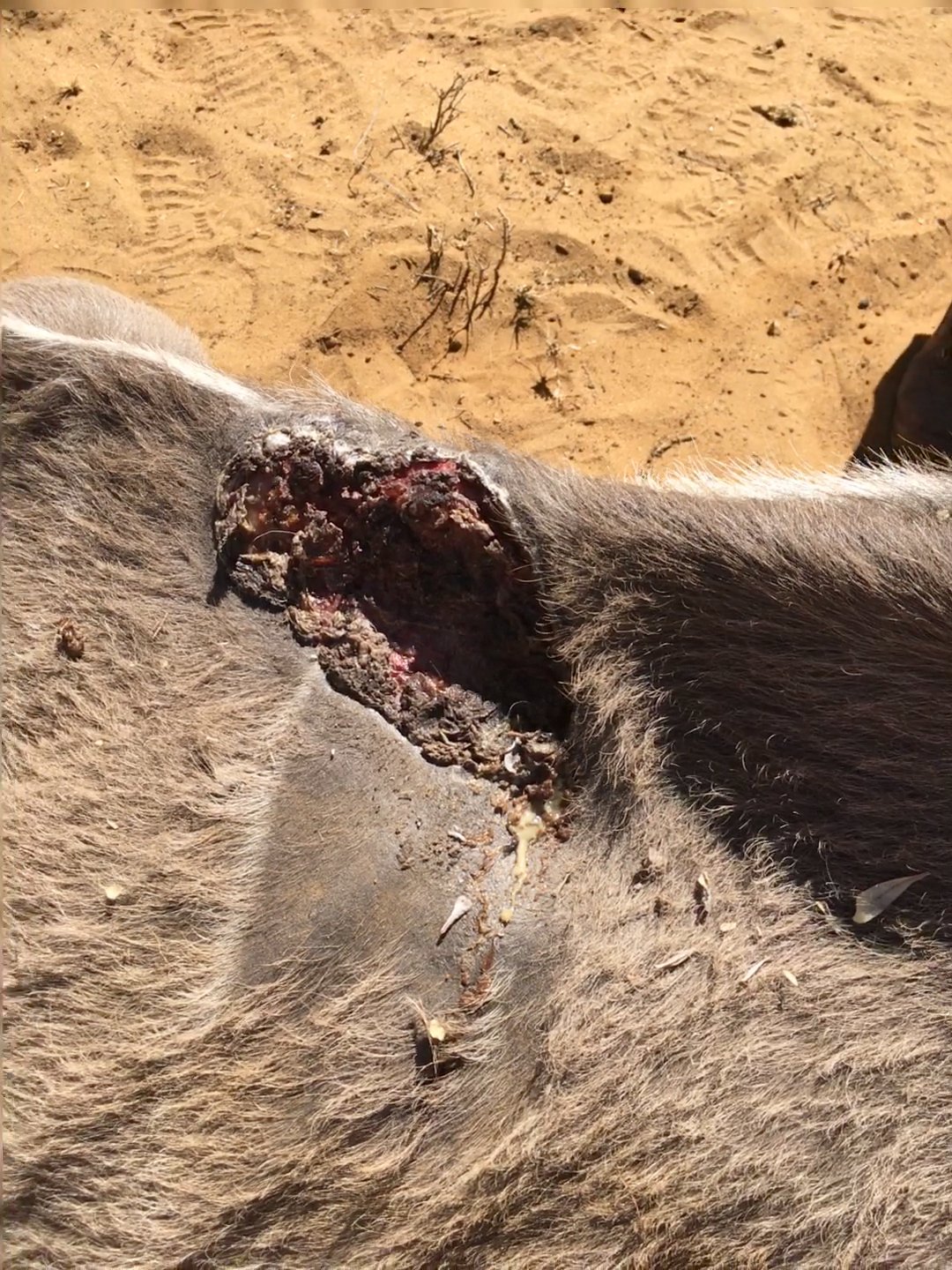 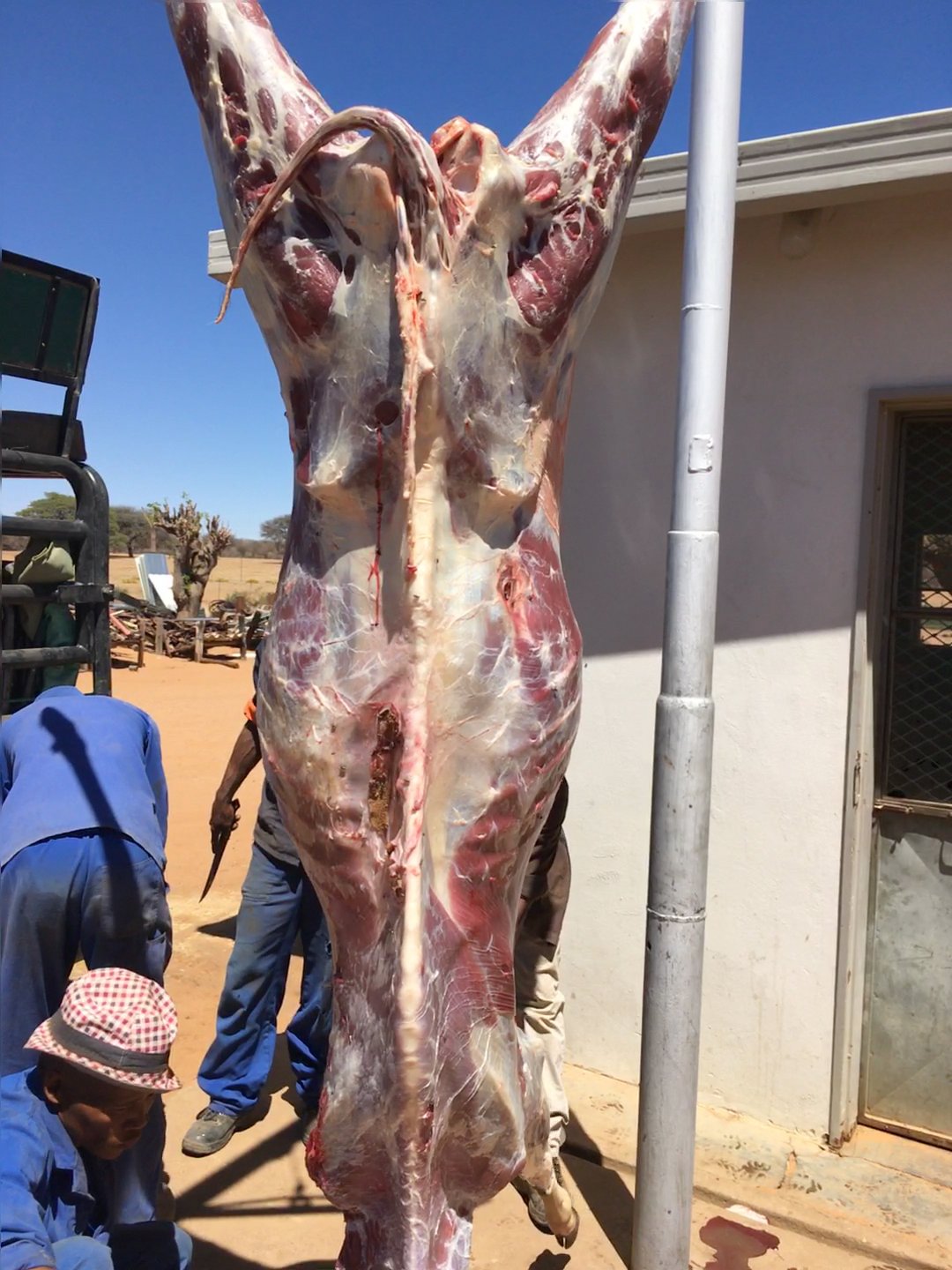 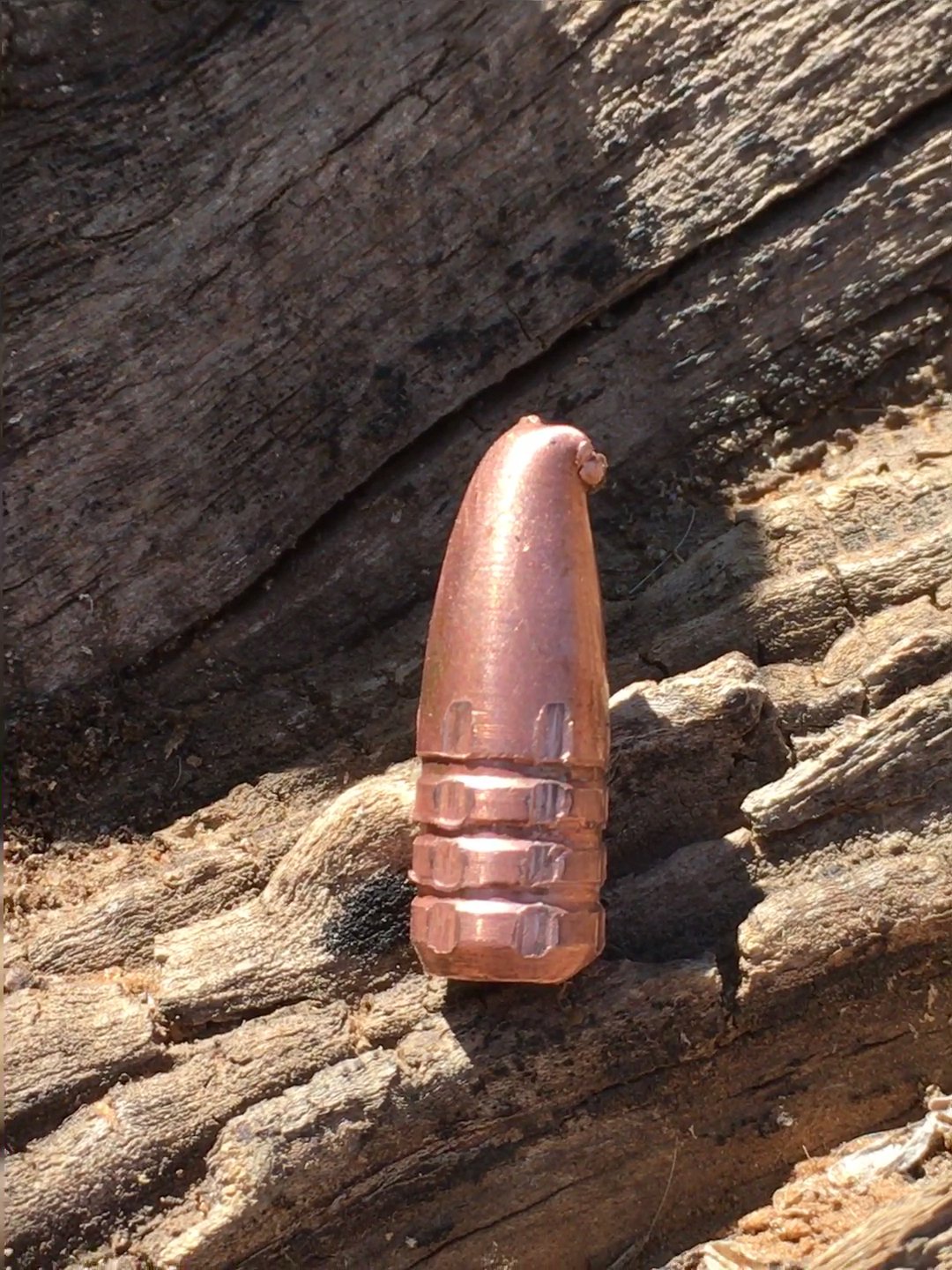 this bullet was stuck in the neck after it had penetrated the whole body (2.shot)
Frontier Spartan bullets,200gn 375 H+H -hollow point copper
Not mushroomed but effective. 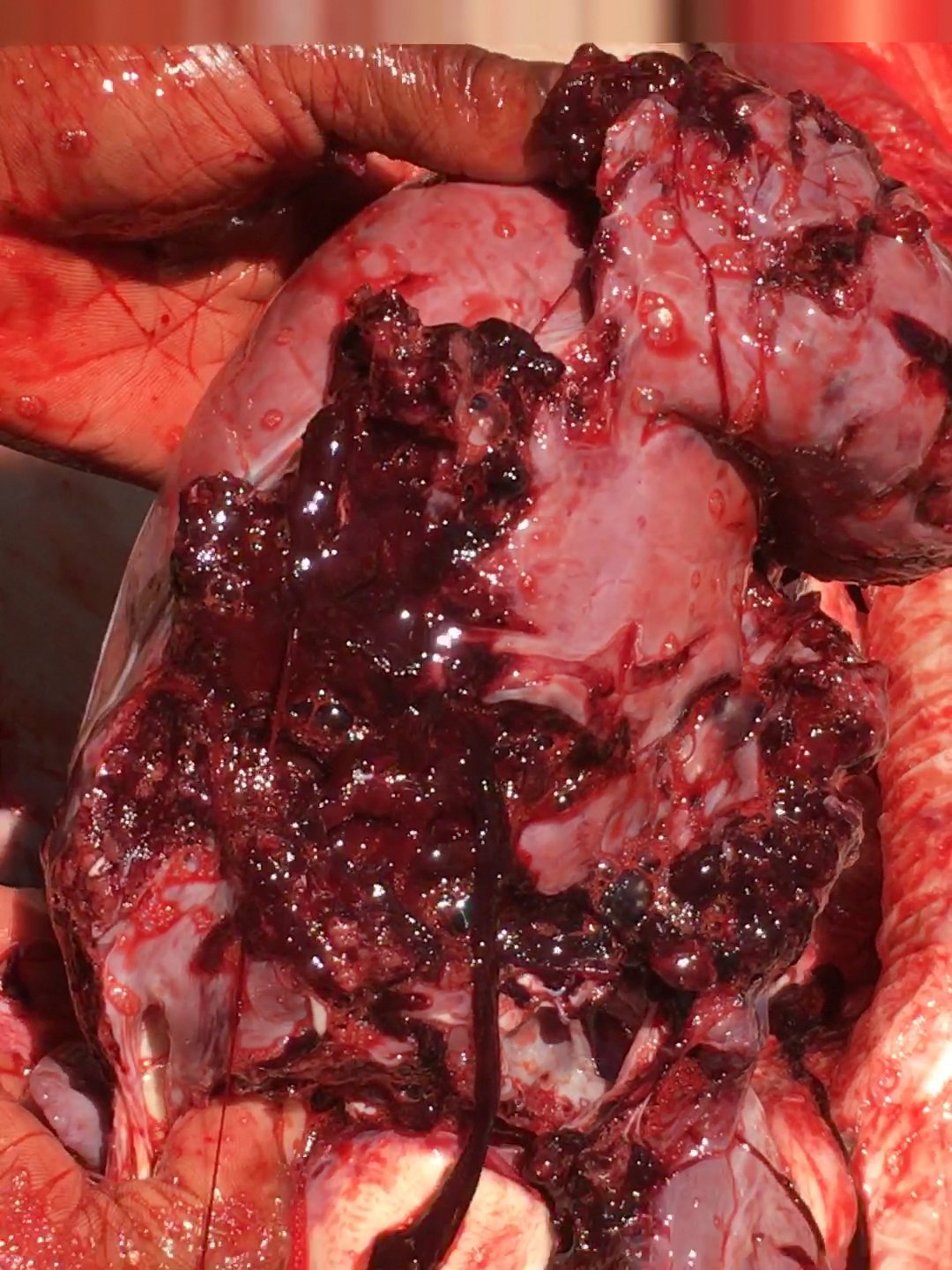 That graze shot to the heart would've been enough.


Also the second comrade shot in the afternoon an old good Kudu and thus it went in the evening in highest mood late into bed.
And I thought I was the one who went out empty.
Hunting is just like that.
Accepting, keep good mood, fight on.
I found interesting how our hosts judge the future prospects of Namibia.
Namely not so bad at all.
In any case, they are not so plagued by fears of the future as their colleagues in South Africa. On the one hand, that would be because there are no aggressive Zulus in the country, who feel well when going under. But a peaceful population. Nevertheless, Africanisation is progressing with all its good and bad side effects.
Around 2000 farms have been returned to black farmers since independence and it is obvious that it does not work.
Productivity is no longer there and after two years it is usually over.
No more wages are paid, no more people are employed and no more taxes can be generated from these farms.
There are no politically tolerated, deliberate farmer murders there.
If they are, they are criminal acts where one was mostly too careless, or what still happens, deals with the farm workers like the last dirt and some farmers were beaten to death by their own people.
In his last speech, Namibia's President said, that anyone who is at home in Africa for three generations can only be African, no matter what their skin colour. We all hope you are serious about it.

Last hunting day:
Early it went into the bush and we found an old bull which we followed almost until noon in great heat, but at the turning wind and the caution with which the old bulls is too own, especially if they know that the search is for them. We failed because of that. And so we camped for lunch in the bush, disappointed and tired from the kudu hunt.
I was determined to come again next year to try it again.
The afternoon we searched for tracks but found nothing worthwhile.
And then unexpectedly often comes:
The tracker said he would have seen far back in the bush a kuduhorn flashing and he wanted to investigate the fast times and all were electrified as it was called old and strong.
Grabbed the rifle and got to him.
He estimated himself a moment and my shot went out.With a Blattschuss/shouldershot he still stormed 100m ahead, the dogs did not hold it in their place and jumped behind the bull.
We heard them bark and when we approached ourselves in the running step, the dogs fended off a cow that had approached the dead bull curiously. 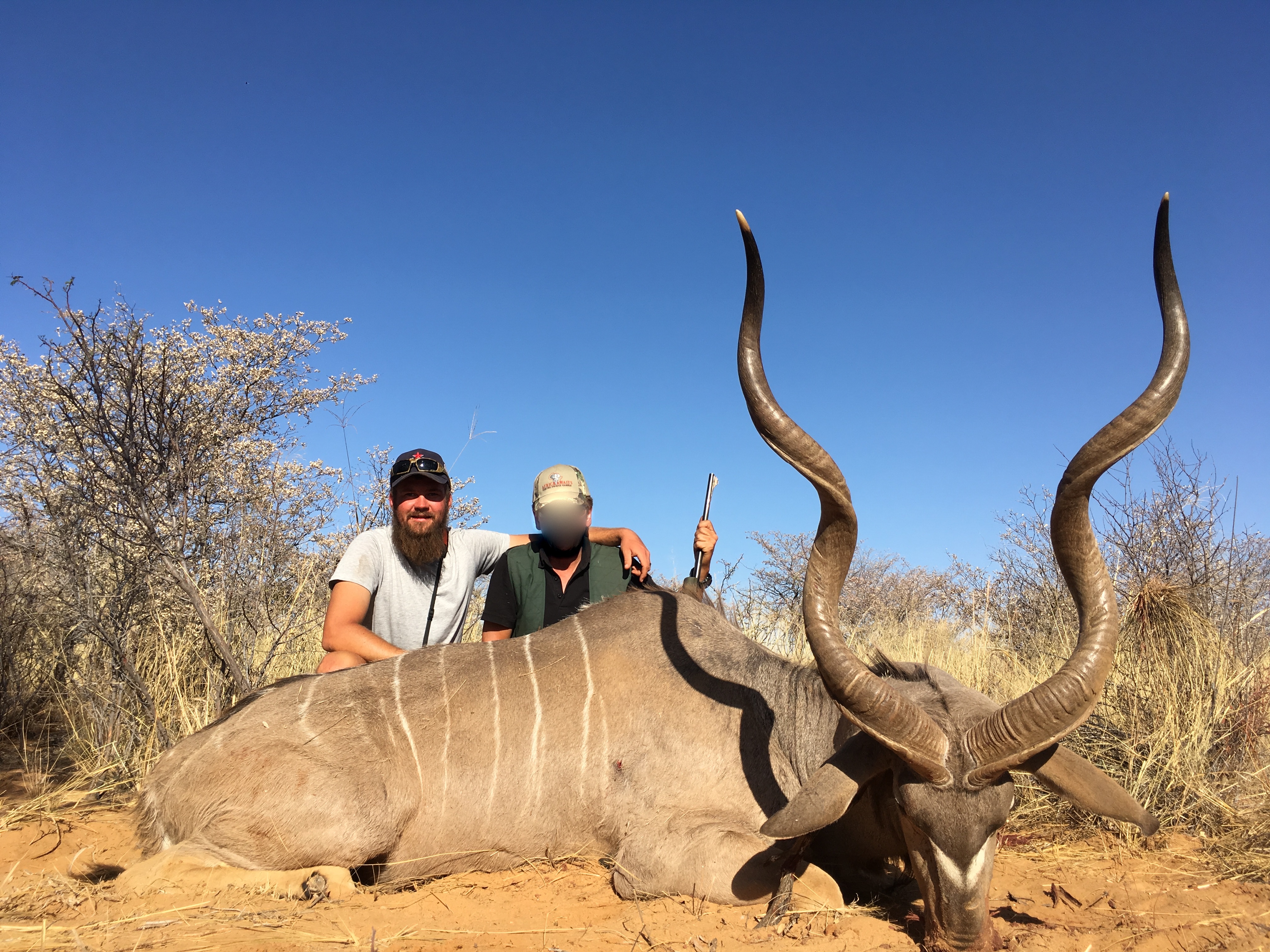 Of all the three kudus we shot, the oldest and strongest was lying here.
Three hours before the end of the last hunting day, the Grey Ghost of Africa fell into my hands
Thank you Matthäus, thank you Christo.
Foxi
Last edited: Oct 14, 2019

You had a great hunt Foxi, thanks for taking us along.

Waidmannsheil! Great Kudu. Thank you for your report. I enjoy your perspective on the hunt, and the situation in Namibia. I am a half Americanische Deutscher and half Americanische Nederlander! It is a real treat for me to view the two cultures meld with the African cultures in Namibia. Please continue writing. I am always learning when you contribute.

Yes nice bull. Congratulations
Tommorow is promised to no one. Go live your dreams.

All fine trophy animals! Thanks for the report and the perspectives of Namibia.
Africa on my mind.

Congrats to all, thanks for your report.

Thank you for sharing your adventure.
Great success and some nice trophies.

Classic turned out tips - just an absolutely wonderful old bull. And a credit to an outfitter who could offer that sort of success to a group of hunters. Waidmansheil my friend. A bull worth waiting for.
"We sleep soundly in our beds because rough men stand ready in the night to visit violence on those who would do us harm" American Novelist - W. Churchill

Thank you people for your kind words and the patience to read all this until the end.
@ Johnnyblues and other sporty cat hunters:
They have a lot of cheetas there and a lot of trouble with them.
The cheetas are all tracked, all of them.
In 14 days they guarantee a Cheeta.If you don't catch one ,you don't even have to pay a cup of coffee there.
I am truly superior ............

Great story @Foxi thanks for sharing your experience.
You must log in or register to reply here.