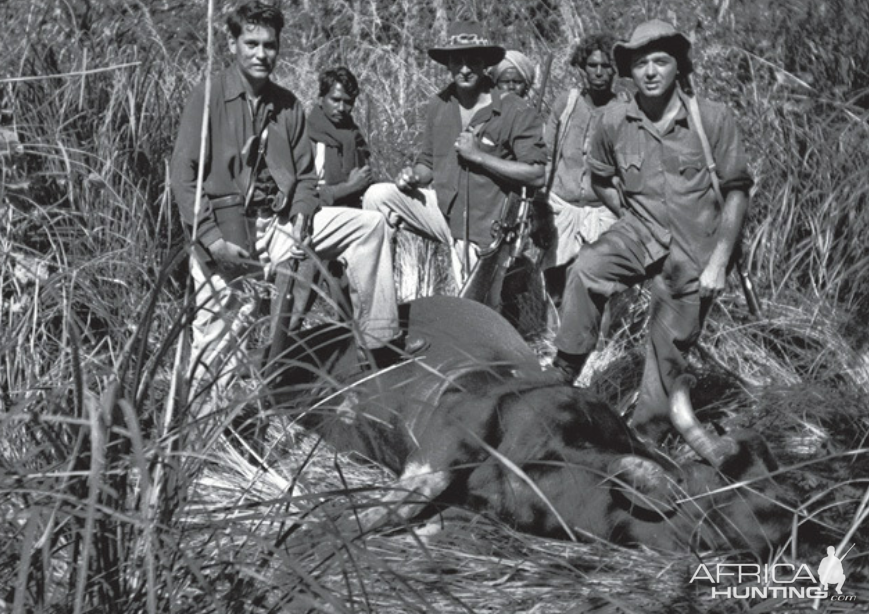 Happy British client in the centre with magnum .375 made by John Rigby and Co hanging on his shoulder . Picure was taken in 1965 . Excellent gun . I am on the left wearing my hat with my Ishapore shot-gun slung on my back . My partner is on left side holding the .3006 rifle belonging to my client . It was a successful Shikar. Rigby guns are very reliable. This genleman went on half a dozen Shikars with us and his gun never let us down.
However , l have only ever heard good things about Blaser . German guns are very robust.
Click to expand...

Great photo, what an incredible time to have been alive. Hunting gaur, tiger, leopard, serow etc. In British India would have been incredible. I'm biased being a big Jim Corbett fan but I would have taken an inidian shikar over an african safari any day.
D

It doesn't matter. Tambo is going to lose your rifle for 24 to 48 hours. If you are connecting, you will be in another country and be using a camp rifle. I do admire the "two rifles in one small case" that you get with the Blaser R8, and the decocking feature adds an element of safety for the PH and tracker. But my next rifle will likely be another Mauser M12 extreme because my hunting tends to be on the rough side in terms of terrain, bouncing vehicles, and sand, or complete weather awfulness during the NY deer season. And I have a soft spot for the M12 because it performed so well last year and seems to shoot anything you chamber with great accuracy.

JPbowhunter said:
Great photo, what an incredible time to have been alive. Hunting gaur, tiger, leopard, serow etc. In British India would have been incredible. I'm biased being a big Jim Corbett fan but I would have taken an inidian shikar over an african safari any day.
Click to expand...

Thank you for your kind words . Of all the animals I have ever hunted in Bangladesh and India , it is the blue bull ( which we call Nilgai) which l enjoyed hunting the most . Their meat is similar to coarse beef and my late mother made excellent kababs using their kidneys ( Gurdah Kabab). I have not hunted or eaten them in six decades. Now that Nilgai can be hunted in Uttar Pradesh and Kuch Bihar again , l hope to hunt one in December with my niece and my Beretta 12 bore.
Shikar season in India used to last seven months and we were very active. What African Safaris have accomplished is enviable as they have preserved the beautiful art of hunting , while India is now sadly a strong hold for vegetarian and shikar hating fools who know nothing about actual conservation or ethics.
Last edited: Sep 25, 2019

So, Blaser or Rigby?

I will admit that I was not a Blaser fan until 2019. I've fooled around with them a bit at the gun shop and at shows, but never got to fire one. I love the classic Rigbys.

I got to hunt in the UK for roe deer and muntjac twice in 2019 (April and August). My guide, Ben Heath (who is excellent and very highly recommended) suggested I use his rifle rather than the hassle of traveling with my own. Ben's primary "deer stalking rifle" is a Blaser R8 Professional Success in 6.5x55. It is suppressed and sports a Zeiss Victory V8 4.8-36X56 (34mm tube) with an illuminated #4 reticle. A pretty expensive set-up, and certainly one I wasn't going to turn down. I figure the same set up would run about $8500 without the suppressor. But suppressors are shocking inexpensive outside the US.

I really struggled with the Blaser "safety" the first day I used the rifle. Second day I started to get the hang of it. Fast forward four months to my second trip with Ben and by the fourth day of using the Blaser it was like second nature. I say "safety", but technically it's a cocker/de-cocker I think, which is really handy. I love the idea of walking around with the rifle uncocked until you are ready to fire. I'm sold on the Blaser after using it a couple times. Very accurate, very versatile, great trigger, easily transportable, etc. Lots of reasons to love them.

There are only three (potential) drawbacks as far as I'm concerned:
1. Price. They are expensive. Any/all of it. A second barrel is $1200+ which is as much as many/most full bolt guns. Scope mounts are $450.
2. While the trigger is great, there is a lot of plastic/polymer for an expensive gun and it seems weird to remove the trigger group to get to the magazine. Won't rust or pit, that's for sure.
3. There are a lot of moving parts on a Blaser. It's strongest attribute could be considered a weakness - how eminently customizable it is. But to be that customizable, lots of parts need to move.

With all that said, I very well may own one in the next few years. They are a genius bit of engineering and all the folks that have them seem to love them. Lots of Blaser owners I very much respect as well.

Pic of Ben's Blaser R8 Pro Success. He uses this gun extensively - as in 250+ deer a year in the damp coolness that is England. Never a single hiccup as far as I know. Also pictured are the Viper-flex quad sticks, which are excellent. Bought myself a set after I used them back in April. Shot a roebuck in the neck at 182m and a fox at over 200m. Almost like shooting off a bench. 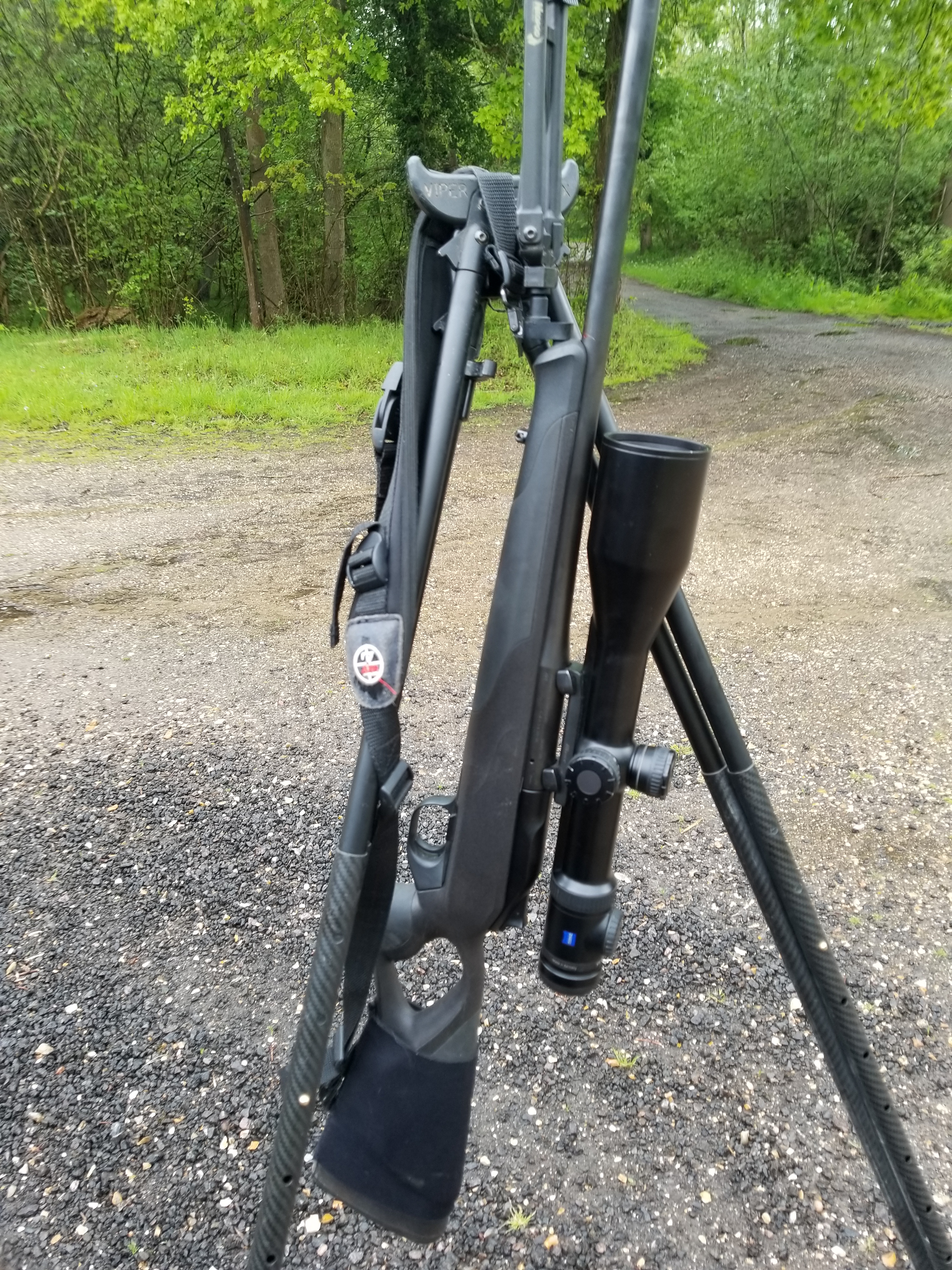 I had the pleasure of examining a couple of the earliest new Rigby big game rifles and wasn't at all disappointed. They were just what I was expecting. Superb. A top of the line very well made magnum Mauser action which takes a lot of expertize, resources and machining to make. I wouldn't at all be surprised if the production cost of making that action is higher than the total production cost of a standard Blaser. The stocks was made from selected for very dense and straight grained 300 to at least 400 years old Ruglans Regia walnut. That's very rare and expensive blanks. On the retail market those stock blanks would be in the at least 4000 $ range maybe more if such blanks ever would appear on the retail market. They are usually picked up by high end gun makers. And the Rigbys are very very well put together. They are ready for decades of hard African hunting and would be just as good or even better by the years.
To me the thought of comparing Rigby big game with a Blaser is ridiculous. I saw in one of the earlier posts someone using a car metaphor...well, to me its the difference between average blended scotch and quarter cask single malt from one of the great makers. It will get you just as drunk but one of them tastes a hell of a lot better and will last a hell of a lot longer..;p

Red Leg said:
Oh come on. I have a pristine original pre-war Wesley Richards .318 takedown. I think, it is what most would agree is representative state of the art in a well made take down of the period. It is an interesting little rifle that I love. It is reasonably accurate for a take down. ..... That is until one takes it down and puts it back together. Everything works the same - just not to precisely the exact same point of aim. Dismount and remount the scope and things get more interesting. Oh it is minute of buffalo out of the case - but it isn’t a buffalo caliber - at least now. That has been my experience in all interrupted screw systems. Cool technology for the period but somewhat archaic eighty or ninety years later. A Blaser R8 returns exactly to zero time after time after time after time. And with no thread wear to the barrel or take down system.
Click to expand...

The Steyr built Mannlicher Schoenauer Take Down Models of M1900 - M1910 were built on a system also used by Westley Richards. The entire barreled action lifts out as a unit, there is no 'interrupted thread' connection, everything stays aligned. I don't know where Pondoro is using a coin. The closest thing to a tool used to 'take down' the MS is a bullet tip, stick, or similar object to press into ta hole in the magazine bottom plate to release a flat spring therein. From there, remove magazine by twisting bottom plate and pulling down, flip lever fore of trigger guard, pull forend pin and the action is free to be lifted upward and free of the stock. 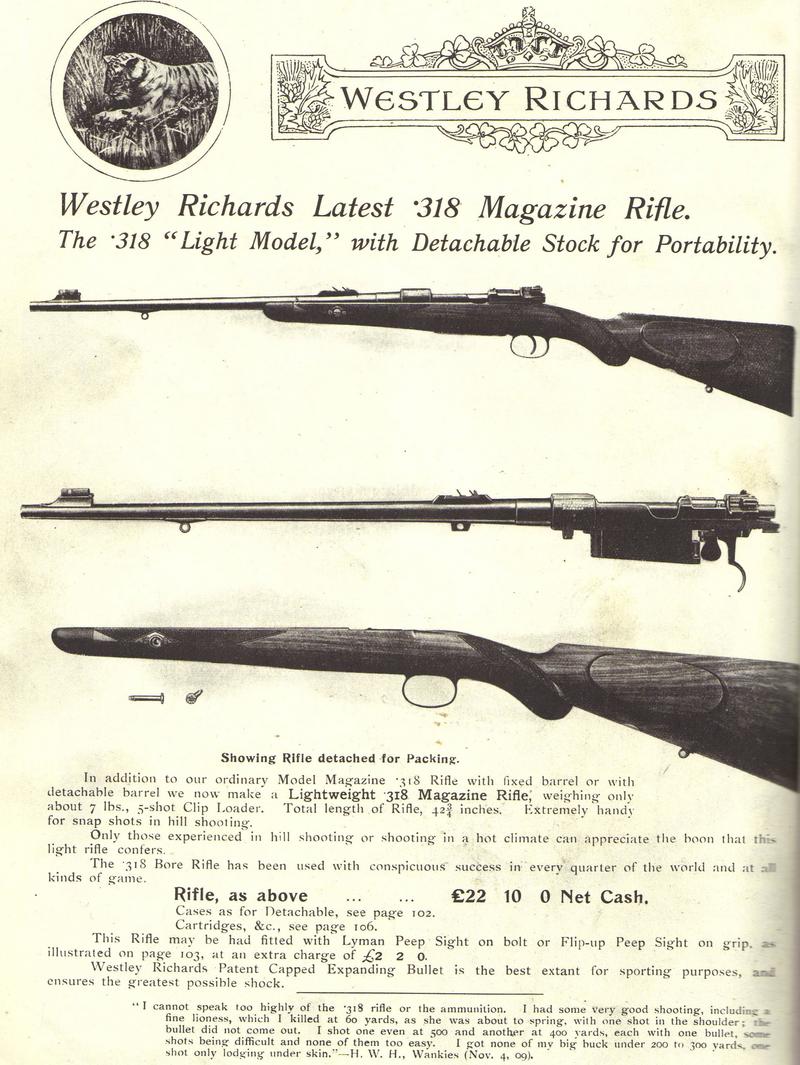 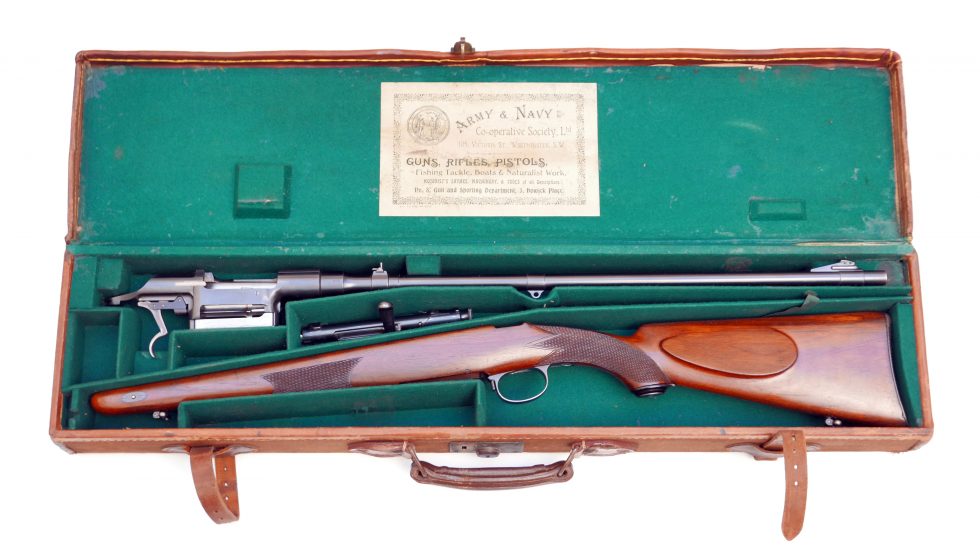 JPbowhunter said:
Great photo, what an incredible time to have been alive. Hunting gaur, tiger, leopard, serow etc. In British India would have been incredible. I'm biased being a big Jim Corbett fan but I would have taken an inidian shikar over an african safari any day.
Click to expand... 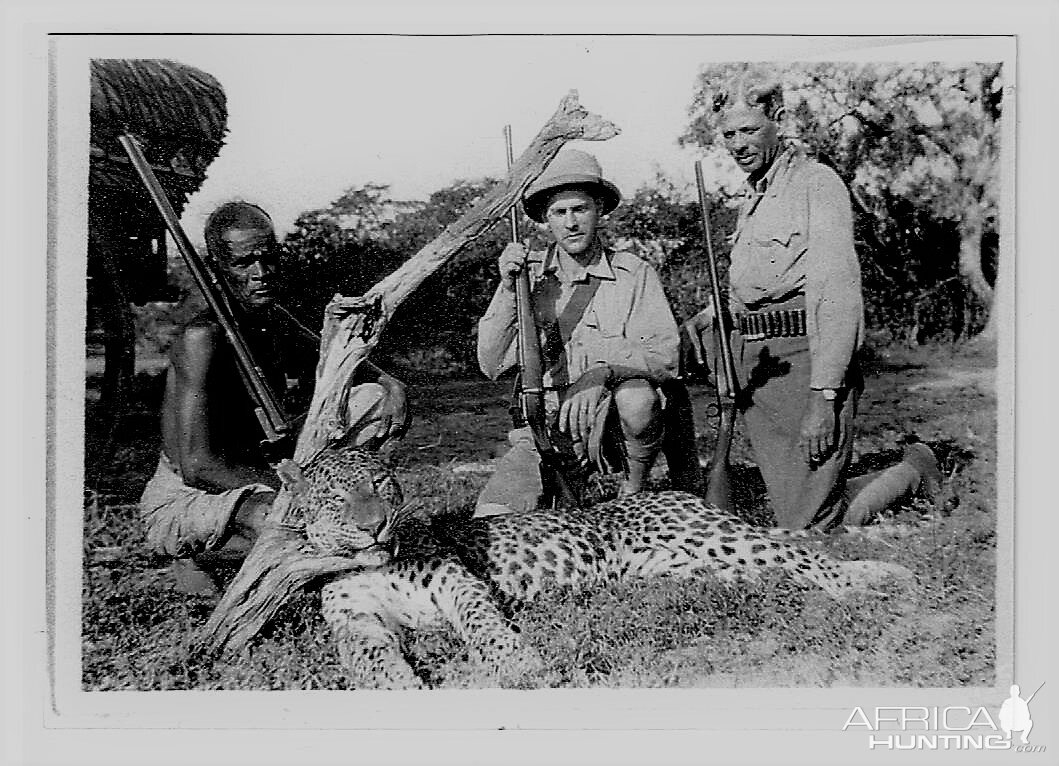 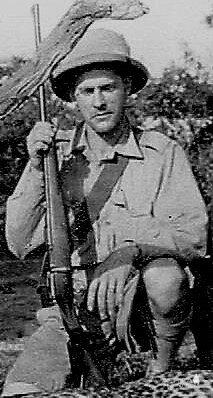 My M1910, held by My Grandfather who bought it 'second hand' while he was a Goodyear executive...
His (my) Mannlicher Schoenauer M1910 Takedown (9,5X57 - .375 Nitro Express Rimless).
You must log in or register to reply here.