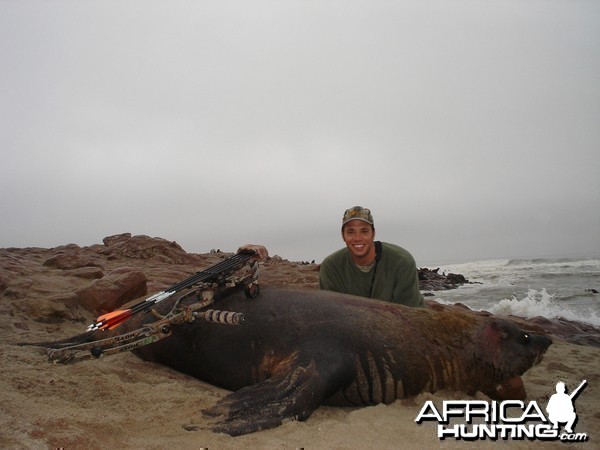 Seals are not on the official list of huntable game species in Namibia and it is certainly a species that does not come to mind when thinking of Africa. It's certainly not a species promoted or advertised by Namibian outfitters as most hunters would not have an interest in hunting a Seal, but as a matter of interest and information I wanted to share with you this unusual hunt experience.

At just under 300kg (660 lb), this Cape Fur Seal bull was bowhunted at Cape Cross in Namibia within the Cape Cross Seal Reserve, a National Park. Accompanied by a Park Ranger, the hunt takes place on the shore, after selecting an appropriate bull, it is important that the Seal be well positioned and a bit inland as one needs to be sure that the Seal will die on land. This is even more important when bowhunting since if it reaches the water it will certainly vanish never to be found again or be impossible to recover.

When it comes to hunting a big bull Cape Fur Seal, it is all in the timing. Outside of the breeding season there are rarely any big bulls to be seen in the colony and it is during breeding season around mid-October that the bulls come to shore to mark their territory and gather a harem. Fully grown bulls can weigh up to 360 kg (794 lb) at the beginning of the breeding season and can end the season weighing as little as 190 kg (419 lb) loosing much of their fat stores in the first 6 weeks by defending their harem and territory, in the mean time not being able to adequately feed. The best period to hunt a big Seal bull is only about a month long from the end of October to the end of November.

One thing no one can escape from is the overwhelming stench that impregnates every part of you, skin, hair, clothing, peoples eye tear and some even vomit, it is not an experience that is easily forgotten. Resulting from a combination of thousands of dead rotting seals, mostly newborn pups that have been crushed and excrement. The combination of heat, wind and the humidity coming off the sea blows the putrid smell straight into your soul...

The government of Namibia issues every year a cull quota to the Seal concession holder. A Namibian outfitter or professional hunter may request and obtain a letter from the concession holder where he grants permission to shoot a Seal bull from his quota. With the Seal concession holder's letter, the Namibian outfitter or professional hunter can then go to the Namibian Ministry of Environment and Tourism (MET) to get permission to apply for a hunting permit. With the hunting permit in hand, one will be able to export the Seal as a trophy, however a CITES permit will be required.

The Cape Fur Seal is listed as Lower Risk by the International Union for the Conservation of Nature and Natural Resources (IUCN). This species is also listed on Appendix II of the Convention on the Trade in Endangered Species of Fauna and Flora (CITES). Appendix II lists species that are not necessarily now threatened with extinction but that may become so unless trade is closely controlled. International trade in specimens of Appendix II species may be authorized by the granting of an export permit or re-export certificate. No import permit is necessary for these species under CITES (although a permit is needed in some countries that have taken stricter measures than CITES requires). Permits or certificates should only be granted if the relevant authorities are satisfied that certain conditions are met, above all that trade will not be detrimental to the survival of the species in the wild.


This particular species of Fur Seal found in Namibia is the Brown Fur Seal (Arctocephalus pusillus), which is also known as the Cape Fur Seal and South African Fur Seal. The Cape Fur Seal is found along the coast of Namibia and along the west coast of South Africa to the Cape of Good Hope and the Cape Province. The Seals mostly breed on rocky islands, rock ledges or reefs and pebble or boulder beaches. South African Fur Seals (Arctocephalus pusillus pusillus) have large breeding sites on sandy beaches in South Africa, and a non breeding group can regularly be found on the sandy beach in Cape Fria in northern Namibia. 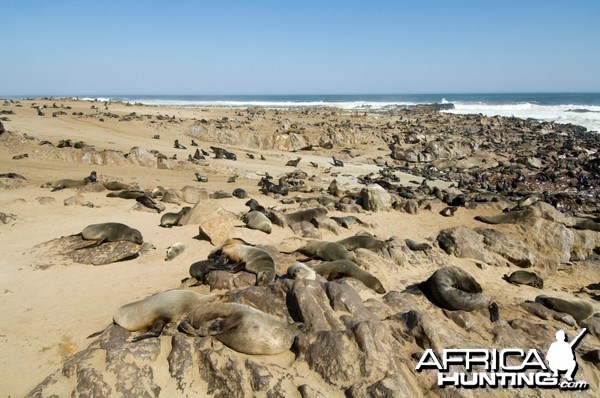 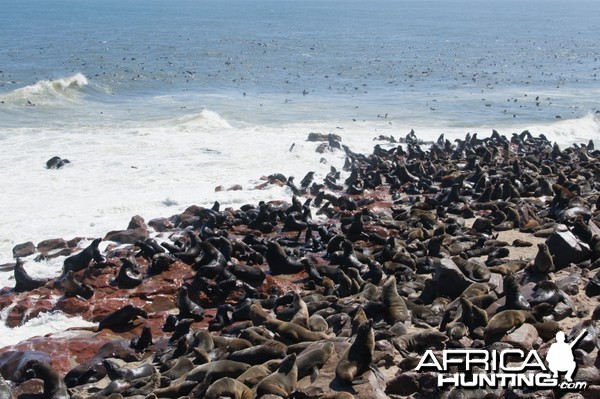 Namibia is the only country where the Cape Fur Seal can still be harvested and where commercial hunting is permitted. Around 85,000 pups (less than 7 months old) are culled every year with its' quota set by the Namibian government, the concession rights run until 2019. South African Fur Seals have a very robust and healthy population and the harvesting of Seals was halted in South Africa in 1990, making this species protected there. 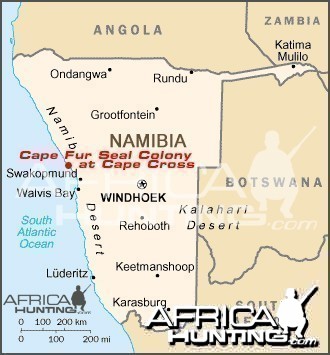 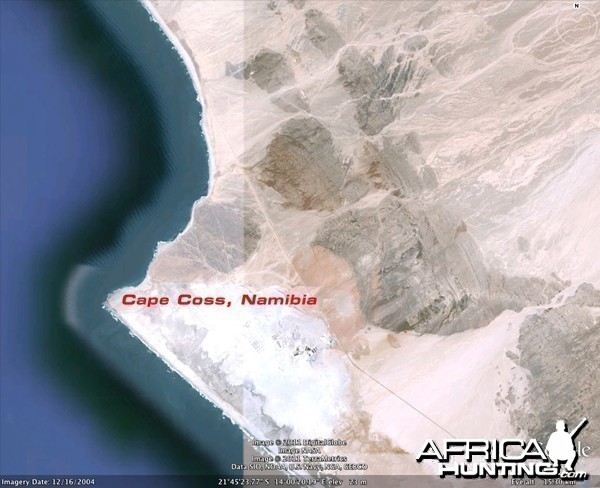 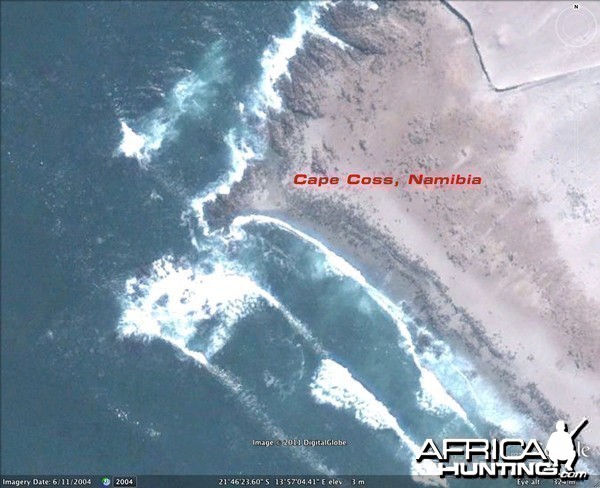 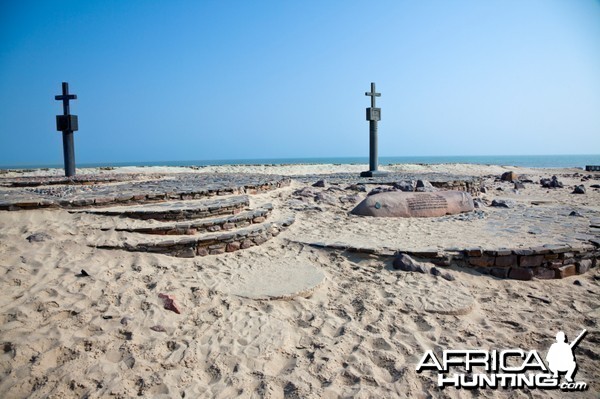 Cape Cross, Namibia. The name refers to the large stone cross erected in the area by the Portuguese explorer Diego Cao in the 15th century, 1486, establishing his country's claim to the territory. He was searching for a sea route around Africa to India.

Cape Cross Seal Reserve was established in 1968 to protect the largest breeding colony of Cape Fur Seals in the world and the largest of the world's nine Fur Seals species. Cape Cross Seal Colony is one of 23 colonies along the Namibian and South African coast. Cape Cross usually has around 80,000 full time Seals and up to 250,000 during November and December after the pups have been born, it is the breeding place of the Cape Fur Seals, which are actually a species of Sea Lion. In mid-October bulls come ashore to establish breeding colonies, defended by heroic chest-to-chest combat, pushing, biting and waiting for pregnant, adult females to arrive on the scene. Not to be outdone, the females fight for a place within a territory. But the rewards are well worth the effort; control of your own territory and a harem of between 7 to 66 females. 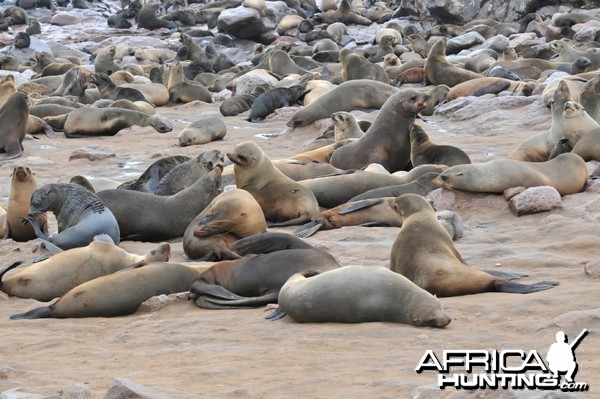 Cape Fur Seal at Cape Cross Seal Reserve in Namibia. The Cape Fur Seal has a large broad head and a pointed snout. Males are brown to dark gray with a darker mane and a light underside and grow up to 2.2 meters (7 feet) and weigh around 200 to 360 kg (440 to 800 lbs). Females are gray to light brown with a dark underside and light throat. They grow up to 1.7 meter (5 feet) and weigh on average 120 kg (260 lbs). Pups are black at birth, but turn gray with a pale throat after molting. These Seals are capable of diving to a depth of 600 meters (2000 feet). 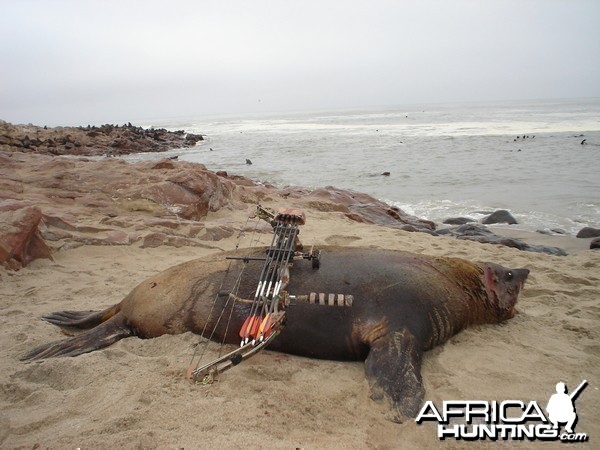 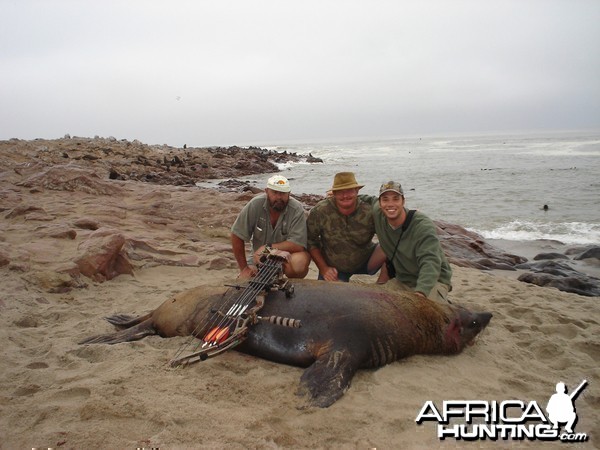 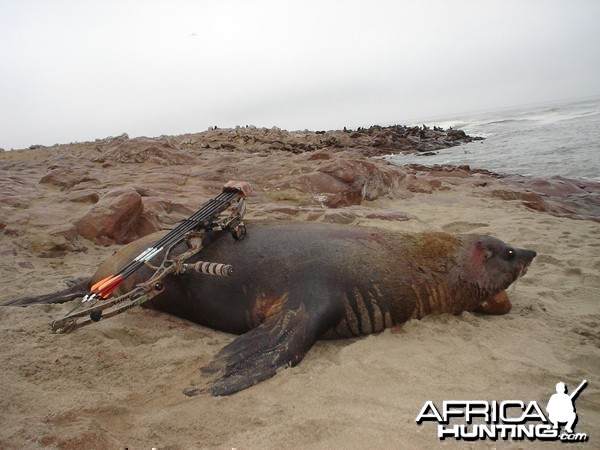 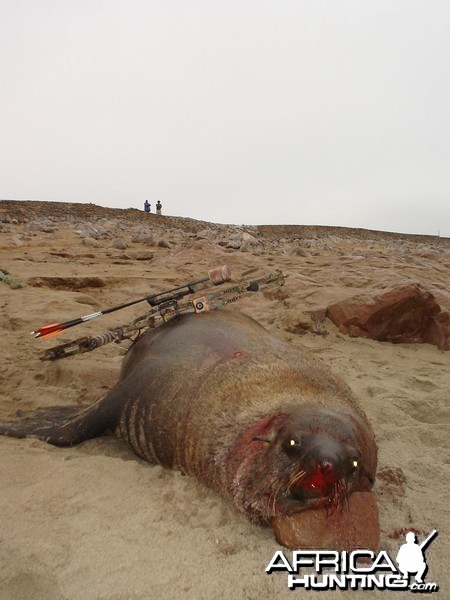