regarding shot placement, i shot a bull on the hip, about 8" left of the anus, it broke his hip nicely! his rear leg was flopping, you can see the video on hunting reports: s. africa cape buffalo hunt 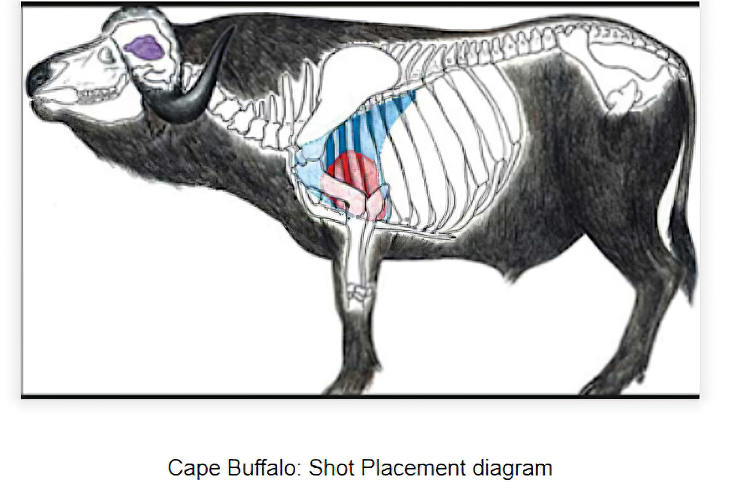 I haven't had the good fortune to hunt in Africa yet ( Though l do have a buffalo Safari planned for 2020 ) . However , My experience with 4 Australian Water buffalo shot over the last 8 years has given me some interesting insight on the popular question of " Whether or not using a large caliber actually makes a difference " . I have shot 3 of them with my .375 HH Magnum Winchester Model 70 . I shot one with a Double barrelled .470 Nitro Express Rifle owned by my Australian resident friend ( which is the first and only time in my life , when l have used a double rifle on game ) . I ALWAYS use the double lung shot , instead of the more ambitious heart shot , since the lung shot is an easier Target and my Model 70 rifle's 3 inch groups make it easier for a lung shot. Take the two following scenarios as an example :
Scenario 1 : Lung shot on a Bull water Buffalo using a .375 HH Magnum 300 grain Kynoch full patch round nosed solid . The bullet rips into it's lungs. It goes maybe 80 to 100 yards , blowing blood from its mouth or nose and drops dead.
I am pretty satisfied with the results .
Scenario 2 : Lung shot on a Bull Water Buffalo using a .470 NE Kynoch 500 grain Round nose solid . Again , bullet rips into it's lungs . Again The buffalo starts it's death run ... EXCEPT this time, it makes 40-50 yards and drops dead . Upon butchering the animal , we find the lungs sustained more damage due to the bigger bullet .
There , you have it . Dead is dead. The .375 HH Magnum killed a Buff. The .470 NE killed a Buff. I used the same shot placement , the same brand of bullets , the same type of bullets and the same range. The only variable was the caliber . One went 100 yards . One went 40 yards ( l am not good at actual mathematics of yard measuring , but you guys get the idea ) . Hope this helps .
Hoss

I have gained much good knowledge out of this post. I would just like to know what are the typical distances shots are taken at? Also how big is the frontal shot area? I have a feeling the broadside shot is about the size of a car door but the frontal area has me scratching my head
The Empire was built on cups of tea. When in doubt, fear, joy or any other human emotion tea is to be drunk.

My shots have ranged from 15 to 80 meters. Only one has been over 50 meters. The frontal shot is tough, off to the side two inches and the bullet skates down the ribs. To me a frontal quartering is a much higher percentage shot as you know are either punching through a shoulder or entering the ribs at a less oblique angle.

All sounds like good ol challenging stuff if using an open sighted double
The Empire was built on cups of tea. When in doubt, fear, joy or any other human emotion tea is to be drunk.
N

norfolk shooter said:
I have gained much good knowledge out of this post. I would just like to know what are the typical distances shots are taken at? Also how big is the frontal shot area? I have a feeling the broadside shot is about the size of a car door but the frontal area has me scratching my head
Click to expand...

Side on is better as you are likely to take heart and both lungs with a decent shot. 10-12 inches diameter for the lungs and about 6 inches for the heart. Front on is more challenging because you can get heart with no lungs if dead centre or one lung and no heart if you are off centre.

For me, the key is to pick an aim point-talking of area is a bit misleading. You need to get the upper heart aim point in your mind and aim for that. Then there is a margin for error around that. And a single lung shot can result in a long follow up and even loss of an animal. Upper heart (which will usually include a lung or two and maybe shoulder bone if quartering or side on) will put the animal down quick.

Zimbabwean PH's are tested at 75 m with a 7" gong off sticks or a tree rest-two shots to count towards their final score, other tests obviously included. It requires that you know your rifle and your sights a lot more than a scope.

As Nhoro says the heart on a buffalo is about 6". All the PHs I've spoken to prefer taking a broadside shot, as it would also take out a shoulder, the heart or lungs. Here's a pic (sorry its a bit dark) from a buff I hit broadside through the heart in Zambia. The size of the heart can be guaged by tracker's hands.

FWIW, when I hunt buffalo, instead of just learning the external anatomical landmarks upon which to place the bullet, I also imagine "seeing" the animal's anatomy and structure in 3D, and that I'm holding a "needle" with which to pierce the heart. I do this to take into account the specific angle presented to me for the shot. I then simply aim along that imaginary line, putting my sights precisely on that point of the hide which intersects the "needle", and fire. Hope that helps. 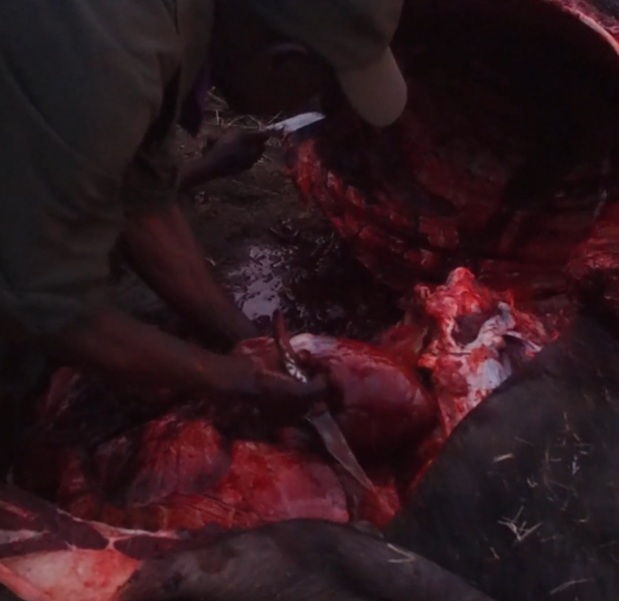 bpcr said:
There is so much crap out there about bullet placement and kinds of bullets to use that I'm glad to see this post because it helps clear things up. Hell, y'all even got pictures.
Click to expand...