Viewed from 18000 feet, in the aluminum cocoon of a Pilatus PC 12 Tanzania is a vast expanse of green and brown with occasional smoke columns from range fires. The further south we fly, the fewer roads and settlements are seen. It is late June 2016 and I am en route to a short landing strip in Ruaha National Park where I am to meet a driver and scout from Bullet Safari for a 4-hour drive to my hunting camp in the Rungwa hunting preserve in southwest Tanzania.

This safari, my second with Nathan Askew was the result of my great satisfaction with my first hunt with Nathan and my wish to again hunt the beautiful lands of Tanzania. My flight to Arusha was on South African Airways out of Schiphol Airport in Amsterdam, and after a great night’s sleep in the Destination 3 Degrees Hotel in Arusha , I felt rested and ready to resume my journey.

I had been told by my Arusha hotel host, that the Rungwa reserve was so remote that I would probably not see another human being apart from our hunting party for the next 10 days. I doubted that, as on my previous safari, I had been frequently surprised by Maasai men trekking between camps in remote areas. He was correct, this was some of the most remote country that I had ever visited. I saw no humans other than two squads of game scouts during my safari.

I was met by Nathan Askew and the 15 or so members of his staff on my arrival. We utilized two camps in this area – separated by 5 hours drive but both overlooking small pools formed by a beautiful river that was now drying up in the African summer. The first camp consisted of a small mess hall built of reeds under a thatched roof with sand floor, fire pit and attached bar. The second camp was more extensive and had a much larger dining hall with concrete floor and more clients tents. The sleeping areas in both camps consisted of large canvas wall tents with individual showers and toilets attached to the rear. The tents were double walled with the outer wall made of the same reed construction as the mess hall, but the flooring was the rubberized canvas of the tent. The camps had just been completed for the season and I was the first safari. I was very impressive given the amount of labor that went into building these nice camps in such a remote site.

My primary species was cape buffalo, with zebra and warthog also sought. The next morning, well before sunup I was awakened by the sound of the camp generator starting and quickly dressed for breakfast in the mess hall and a day of hunting in this remote and beautiful area of Africa.

The method of hunting was to drive the rutted roads until we found locations where the buffalo had crossed. Fresh spoor (that’s manure to you guys from the farm) and tracks were the key. Once we (by we I mean the eagle eyed trackers) had found fresh sign of buffalo, I dismounted, put on my camelback, Nikon binoculars, Dakota .416 Rigby and began the stalk. The first day, we stalked a herd of buffalo on a 10 mile round trip. The wind was swirling and our ability to sneak up on the herd was compromised by small wind shifts. At one time, we got within 30 feet of the herd, but were “busted” by an unseen cow when I rose up out of the tall grass that we had been crawling through to identify a large bull. We hunted hard all day. Our party ended up bushwhacking back to the truck well after dark. It was a fun day and a nice challenge.

Our noon meals while hunting consisted of sandwiches, vegetables, cookies and soda or water on small camp tables, followed by a siesta in a shady spot for an hour. I slept better on the ground than in a chair, and the ground never felt so soft as it did while on this safari. Nathan had a talent for sleeping in a folding chair. Of course, he was not as good at sleeping on the bare ground as I was. (Thanks to the US Army for teaching me that trick.) I returned to camp and was treated to a beautiful display of constellations in the southern night sky. The absence of light pollution makes this one of the best free displays on earth.

The next morning, my alarm woke me, and again, well before dawn I was off for a breakfast of Maasai porridge and a day of hunting. The porridge had been a gift to me from my friends in Arusha. The cook was amused that I requested it every morning rather than the bacon, eggs and toast that was a typical camp breakfast. I liked the flavor and it stuck to my ribs.

We hunted along a dry riverbed for most of the morning. We saw tracks of lions and leopard, but no buffalo. In the early afternoon, after a lunch in the beautiful shady riverbed, we resumed our hunt when we stumbled upon a small herd of buffalo. They broke to the opposite steep bank and we merely watched them go. Nathan was on his game. We waited for 15 minutes to give them time to settle down and started after them on their track. We slowly moved 800-1000 yards from the start of the track, and suddenly discovered a small group of bulls within 150 yards. This group was a different group than the one that we had been tracking. Nathan, the head tracker and I slowly crept within 100 yards of this group, and after a few seconds of glassing them, Nathan whispered that the buffalo on the left was very big. The tracker set the sticks and I aimed at him. Buffalo are tough! I was using a Dakota .416 Rigby with a Leupold 1.5-5x 20mm scope. I had loaded it with Barnes 400 gr TSX soft point followed by 400 gr. banded solids. Each bullet delivered 5500 ft/lbs of energy at the muzzle. The buffalo was standing broadside. My shot struck perfectly, went through both lungs and destroyed the top half of his heart. Notwithstanding this hit, he turned so that his backside was presented to me. He was not moving so Nathan and I moved 30 feet to our right so as to present a quartering shot. This second shot went through his lungs and exited on his far neck. He still did not fall, but instead started to very slowly walk from left to right, presenting me with another broadside shot. This third shot, impacted within 2” of the first caused him to finally go down. He was still moving but not getting up so we approached within 30 feet and I fired a 4th shot at a very low angle into his brisket up into his spine in the area of his shoulder blades. He finally lay still. As I said, buffalo are tough. Nathan did a wonderful job getting me within shooting range of this large buffalo with a 41” spread.

Later in the week after playing hide and seek in some giant boulders, Nathan got me within range of a large zebra stallion. The stallion had a large series of healed claw marks on its right flank where a lion had got ahold of him. I shot him off sticks at 100 yards with the Dakota. He bucked, ran a few yards and collapsed.

Here is my partial gear list of things that I always took into the field (you will need more, but these are my most important things).

1. Rifle: Dakota African model .416 Rigby w Leupold 1.5-5x scope
2. Boots: There is no substitute for leather in Africa.
3. Binoculars: Nikon Monarch 8x
4. A DARK handkerchief (keeps you cool when wet, and conceals your face when close to game.)
5. Good wool socks (Fox River or Darn Tough: both expensive but more than worth the price after a long walk in the bush.)
6. Flashlight
7. Camelback
8. Polarized sunglasses
9. Lip balm with sunscreen

The quality of the hunt and services provided by Nathan Askew and Bullet Safaris were excellent. The food was first rate, the accommodations were fantastic, and the logistics were handled in a first rate manner. I have met few people in my life who work as hard and are as focused on client satisfaction as is Nathan Askew. I recommend him to anyone as an outfitter and PH. 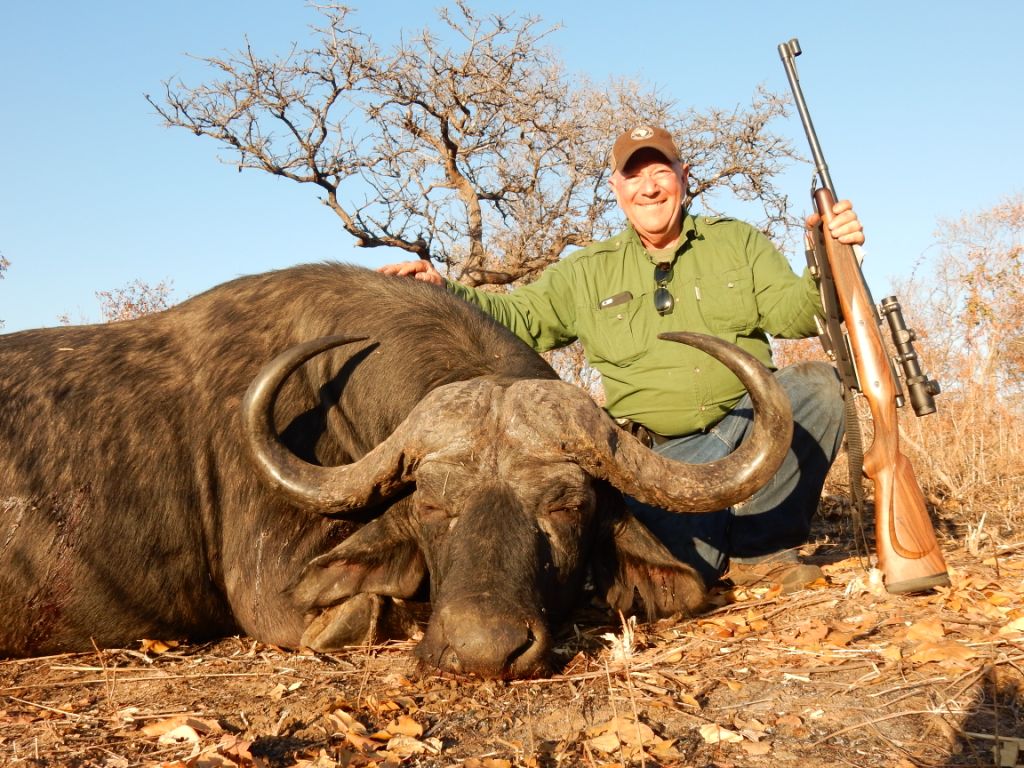 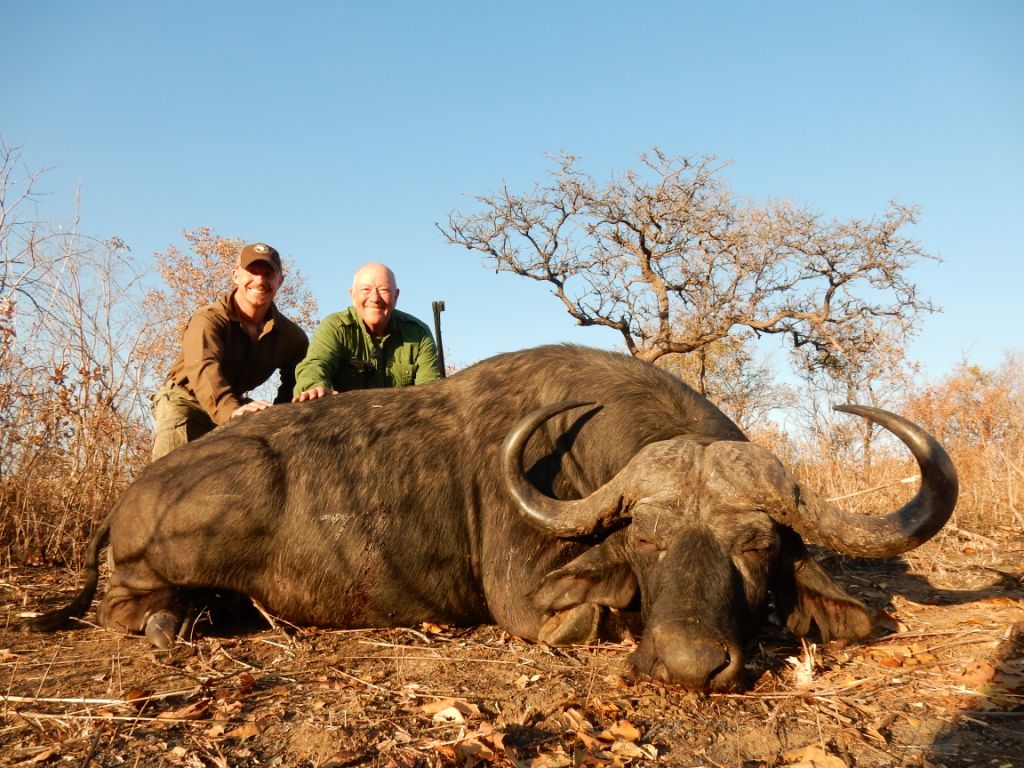 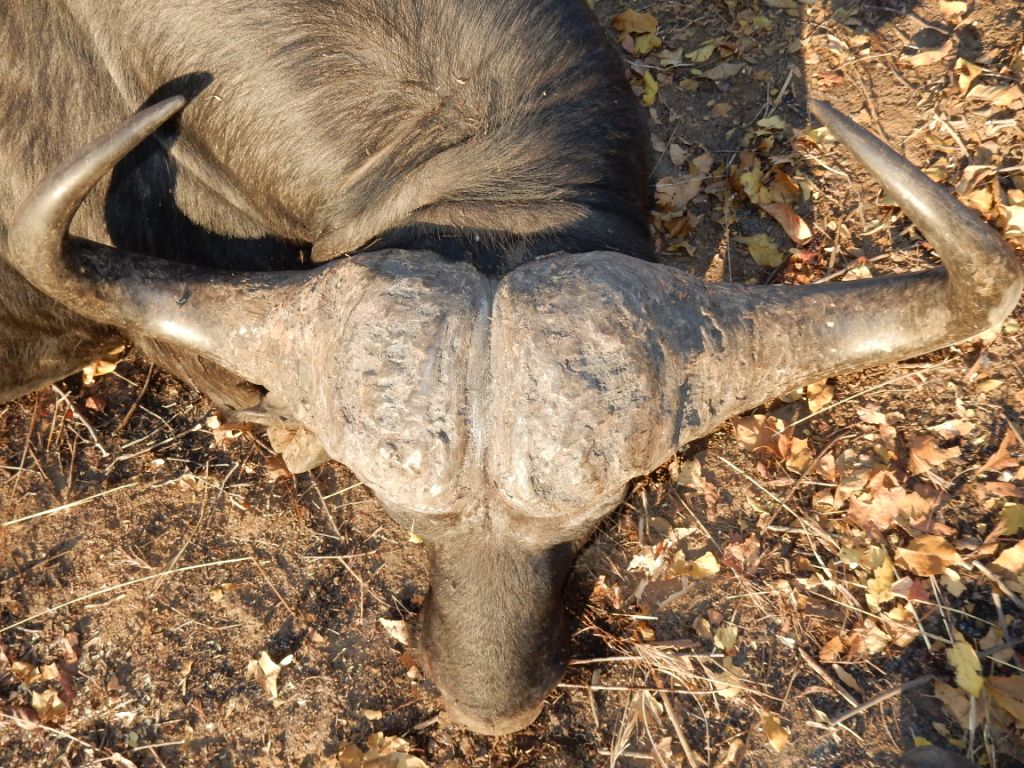 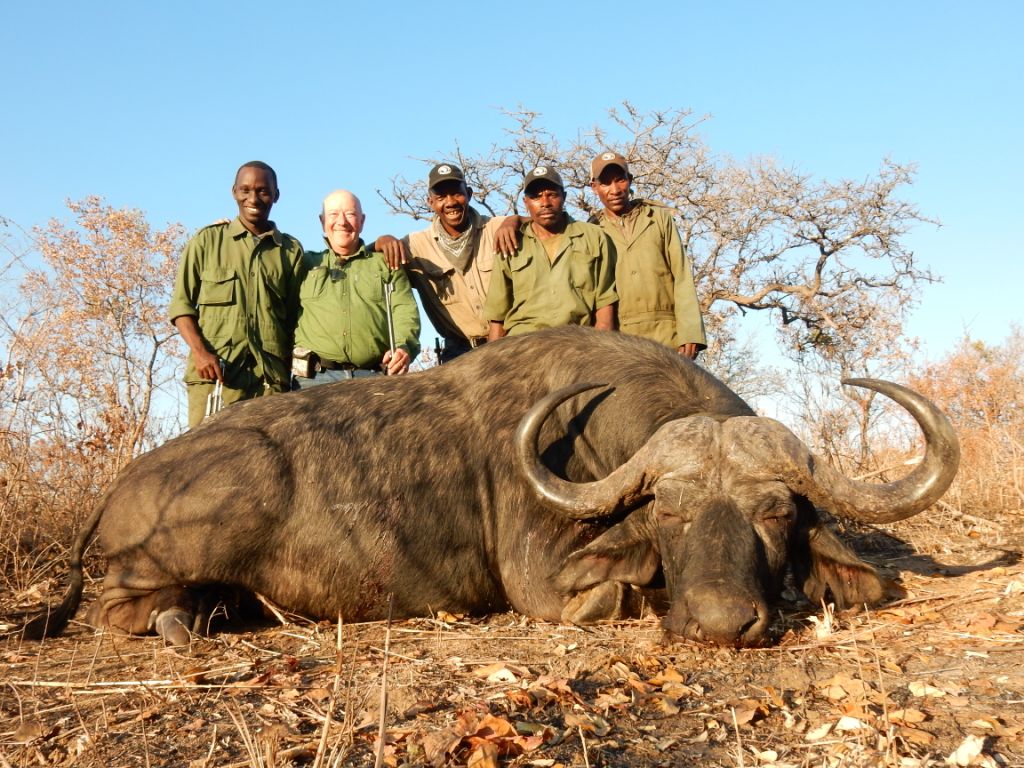 Congrats to the hunter! Thanks for sharing
John 3:16

Congratulations. Very nice
Tommorow is promised to no one. Go live your dreams.

Nice report to read. Great buffalo. Anyone would be proud of that trophy. Bruce

Great report and a great trophy as well! Congrats.

Hi Guys - we are back in the USA!
We had a great season in TZ and RSA - great clients, old friends and the last real adventure on earth led to some great experiences that will be with us forever!
Life is short - get out there and chase your dream...
As usual a big shout out to the crew and supporters here at AH!

Great report!
"Your imagination is your preview of life’s coming attractions." ~ Albert Einstein

Great Report! I love reading peoples report of Dangerous Game hunting! I am always amazed at the tenacity of Buffalo! They shrug off a lethal hit from a .416 Rigby and keep chugging. THIS is a great example of why clients need to use tested dangerous game calibers. To anyone who thinks that a .45/70 is a great buffalo rifle... can you imagine if this buff had decided to charge?! A .416 Rigby produced a delayed reaction and it hits almost twice as hard! This is not knock on the .416! Its a demonstration of how hard buff can be to put down. Well done! That's an impressive buffalo!
"I am not a good shot, but I shoot often" - Theodore Roosevelt

Great report! I am booked with Nathan for this very hunt in 2018!

Nathan, I will see you Thursday at DSC!

Wow, that's my dream buffalo! I don't have one over 40 with good boss like that! Congrats to all.
You must log in or register to reply here.