I spent most of April in Zimbabwe with Martin Pieters Safaris. I hunted the Omay which is a 2 million acre Campfire area that Martin Pieters has hunted for many years. I was after lion, leopard, hyena, sable, crocodile, bushbuck, waterbuck, klipspringer, grysbuck, and others. We were on the shores of lake Karriba. The conditions for hunting were not good. Extremely tall grass, trees, and shrubs with dense foliage made visibility very poor. The weather started out fairly mild but warm then we got some rain storms which cooled things down a bit but it became very hot later in the safari with temps exceeding 106 degrees. With high temperature, high humidity, sharp grasses, and all manner of hazards I was faced with a difficult hunt in many respects.


When hunting an area with a high density of predators the prospects for seeing lots of plains game is slim. I knew this going in but it was difficult even getting animals down for bait. I used three hippos, about a dozen impala, and a waterbuck for cat bait. My second PH Dalton had a hippo up for bait for me when I arrived and that proved to be a good bet because it was one of those baits that my lion came to on the third day of my 21 day safari. Finding tracks and a bit of activity on the bait the next thing to do is check the trail cameras. Unfortunately they did not work that night for some reason so we could not build a blind just yet. After putting up a fresh hippo leg and three trail cameras the stage was set and the anticipation was building. Day 4 came and with it great trail cam pics of a truly majestic lion. From this point on words can not do justice to this lion hunt. That evening my lion came in after much rain and thunderstorms had passed, surely I was ready for that all important shot of a lifetime. One shot from my .375 Ruger and the lion was down. A mature lone male lion that was unknown to anyone in the area. What a trophy!


Now we were ready to turn our attention to Mr. Spots. Although we saw a mature leopard in daylight on day 1 he had other ideas and eluded us for the entire safari. Many baits were placed and leopard tracks were seen but the majority of them were females or young males. As you know only males can be taken and now it is a $20,000 fine in Zim for shooting a female leopard. Obviously the lion was the highlight of the safari and the leopard or lack thereof was the biggest disappointment.


Martin and his staff are very good to work with and his camp is a unique place. The facilities are not new but very nice and they even have wifi! The food they serve is a real treat and I was pleasantly surprised to not have to eat game meat every day! Don't get me wrong I love venison and enjoy eating what we hunt but I have been on safaris where it gets really old and you just want a steak or some pork chops. Leaving very early each morning we had jaffles for breakfast on the road most every day. A jaffle is a breakfast sandwich that is pressed and cooked in a jaffle iron over a fire. They were delicious and a real treat that we looked forward to each day. We also had a lunch packed for us each day consisting of sandwiches and meat pies, scotch eggs, or some other creation that their long tenured cook made for us. It was all very good. I really enjoyed all the people on this trip and as you know most everyone you hunt with becomes a life long friend. Martin and his excellent crew are no exception and I am fortunate to have them as my friends.

Thank you for sharing. Congratulations on a fantastic lion and croc! I really hope to hunt hippo one of these days.

If you can, please post photos of the bushbucks. I love hunting them and would enjoy seeing the photos.
Regards,
Mike

huntermn15 said:
If you can, please post photos of the bushbucks. I love hunting them and would enjoy seeing the photos.
Regards,
Mike
Click to expand...

Mike,
Ok I posted the bushbucks. One was an older darker buck that I took at 225 yards after missing one the day before at 380 yards (not a misprint!) and then the second lighter colored buck was a surprise in the hills at about 20 yards! I agree they are one of my favorite animals.
Regards,
Philip

Philip,
Thanks for the photos and descriptions. Congratulations on two fine trophies, they are beautiful animals. I hope to take at least one in the EC during my 2017 trip over.
Cheers,
Mike

Congrats on your hunt and thanks for sharing!! I would love to hunt in that area someday myself
John 3:16

Great lion congrats. What now with the cat since it cannot be imported?
Tommorow is promised to no one. Go live your dreams.
D

Philip I am very happy that you had such a good hunt! Sorry about spots giving you the slip but you sure made up for it with the lion! The hippos looked impressive as well. Can you tell us how long the croc was?

Awesome! There is no place like Omay north! Congrats on that amazing wild lion!

Congrats on the lion!!!

That's a memory that will last a lifetime!
HUNTERS make importation bans work!

Sincerely impressive to see just how appreciative you are of such an incredible trophy Lion.
Congratulations on an obviously hard hunt.
Thanks for sharing your hunt with us Philip.
Last edited: May 30, 2016

Congratulations on an excellent safari. Martin sent this picture while you were still on safari. That is truly a remarkable lion. Well done to both you and Martin. 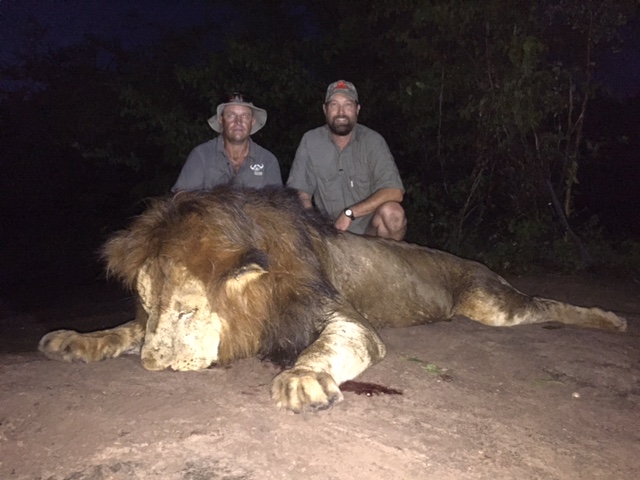 Lions like that are few and far between. Congrats. The Bushbuck are also beautiful. Congrats on a great hunt. Bruce
S

Congrats on a brilliant lion and hunt.

Congrats on all your amazing trophies... especially that lion!
You must log in or register to reply here.