Why not a Single Shot?

Upon my 2021 safari, I was surprised to hear my PH tell me that I was the first client he'd ever had using a single-shot rifle. But then again, I remember reading somewhere (Boddington? Woods? Capstick?) that in spite of the popularity of single shots in the four decades straddling 1900 and of the rather ubiquitous Ruger No. 1 more recently, the greatest majority of today's traveling sportsmen use bolt-action rifles, a few use doubles, and an infinitesimal percentage stick to single-loaders.

Somehow, the older I get, the less interested I am in bolt-action rifles--in spite of my owning some truly nice ones and in spite of the company I work for being the purveyor of not one but two of the most accurate bolts on the market today. My love affair with doubles has remained unabated since my 20s, when by living on lollipops and ramen noodles for a year I was able to afford my first one. But what is growing every year is my passion for classic single shots. 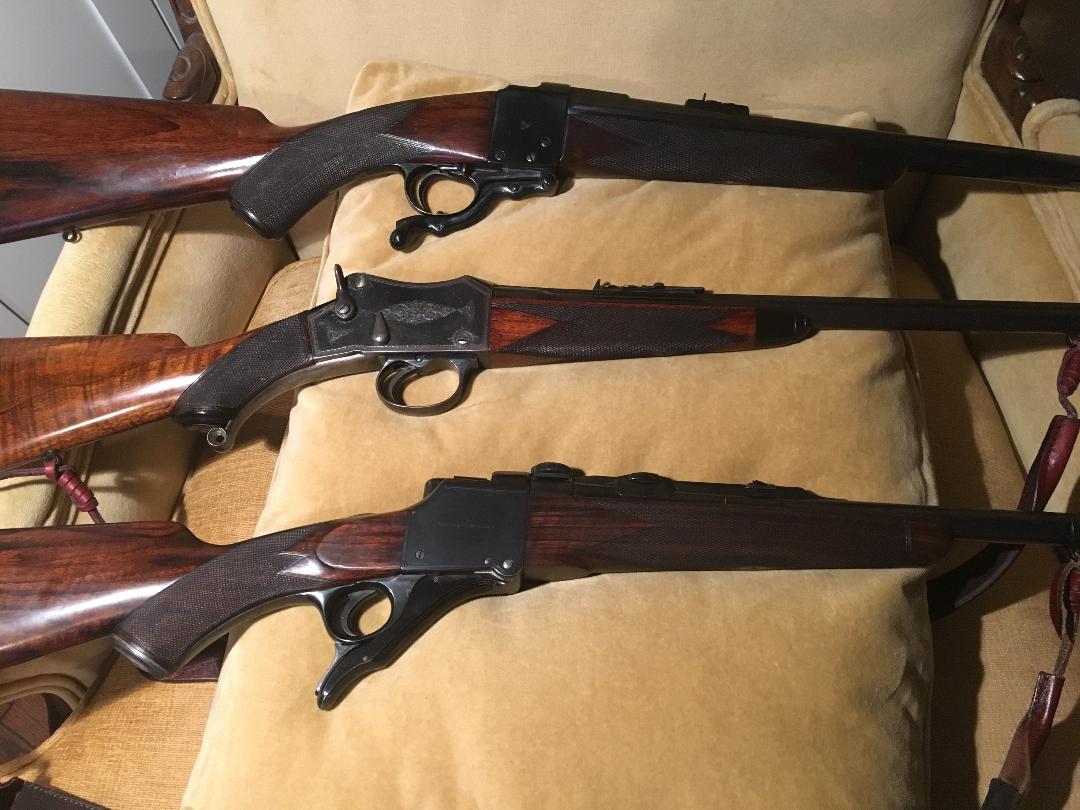 My SAP import permit for my upcoming June safari has the bottom two rifles on it--respectively a .303 Martini sporter by Watson Brothers and "my baby," a Webley-action H&H in .375 Flanged Magnum that I'll literally take to my grave. The top rifle, I'm increasingly tempted to work it up to being my 2023 buffalo rifle--a .500 Farquharson by Westley Richards. In the rotation-system that I am envisioning for my future hunting adventures, I see myself taking two rifles when possible; one of them may be a double or a bolt but the constant will be a single-shot. When it is impossible for me to take two rifles, I'll just default to my beloved .375 Flanged.

Am I alone in this quasi-obsession with single shots? There's something ineffable about them that really captures me--they way they look, the way they work, not to mention the relative ease with which different loads can be worked up for them without concerns about regulation. While going to Africa is a magical experience, I find that going to Africa with a single shot is downright dreamlike.

Tom you're right on the point, to me using a single shot in Africa would be pure magic! I'm at work right now but I'll pay close attention at your writings later on...
But, my friend...you do have some gorgeous rifle! My congrats!

Grazie, @Phil Giordano - I love these rifles and I feel that by taking them to Africa I'm (so to speak) giving them their soul back.

I've been to Africa twice and on both trips I took two single shot rifles, a T/C Encore and a Ruger #1. When I go on my first DG hunt I'll use my Ruger #1 in 416 Rigby. A single shot rifle has been my primary hunting rifle for the last 30+ years and I've never felt underguned.
Micah 6:8 - Seek Justice, Love Mercy, Walk Humbly with your God

My first centerfire rifle was a single shot. It was my go to for years in hunts from Florida whitetail to Alaska Dall sheep and caribou. A Thompson/Center Encore in 30-06, which I used to take eight animals total on my first two hunts in Namibia. Since then I've gained a few more rifles, two of which are Ruger #1. I've never felt at a disadvantage with it. I can load a second shell nearly as fast as a bolt action and I have rarely had to.

The nice thing about the Encore is I can change barrels out in a few minutes. If I wear out that 30-06 barrel or want to use a different caliber I can replace it easily. Here it is with some new wood.

I’ve a thing for single shots,yet I own exactly zero now.
One day I’ll get myself a Heeren,wanted one for years.
The “best” one I’ve owned was a Blaser K95.

I love single shots as well. My current favorite "deer rifle" is a 7x65R by Bailey Bradshaw. http://www.bradshawgunandrifle.com/about-us.html There are several tricked out No. 1's in the gun room as well, including a Heym. 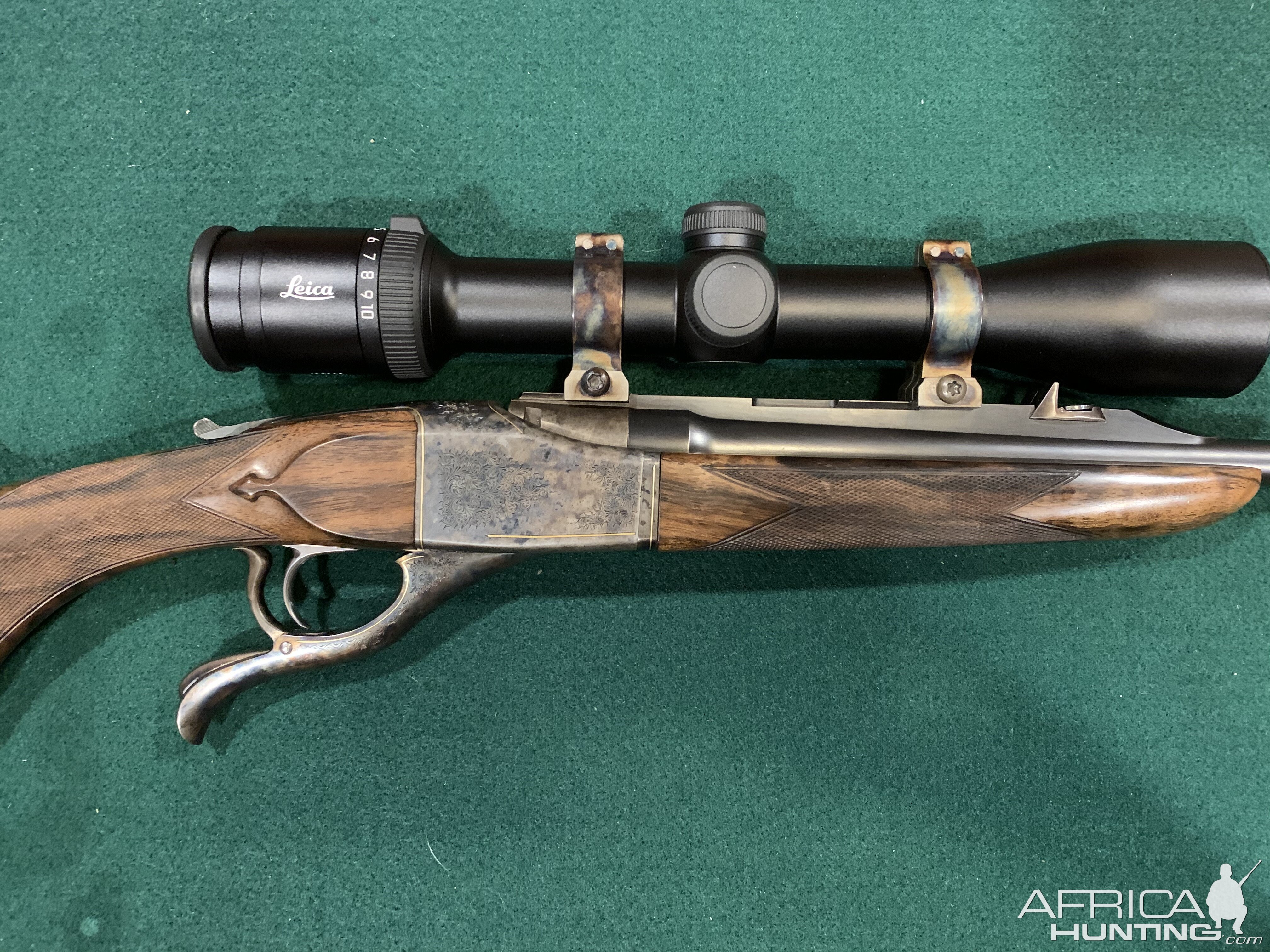 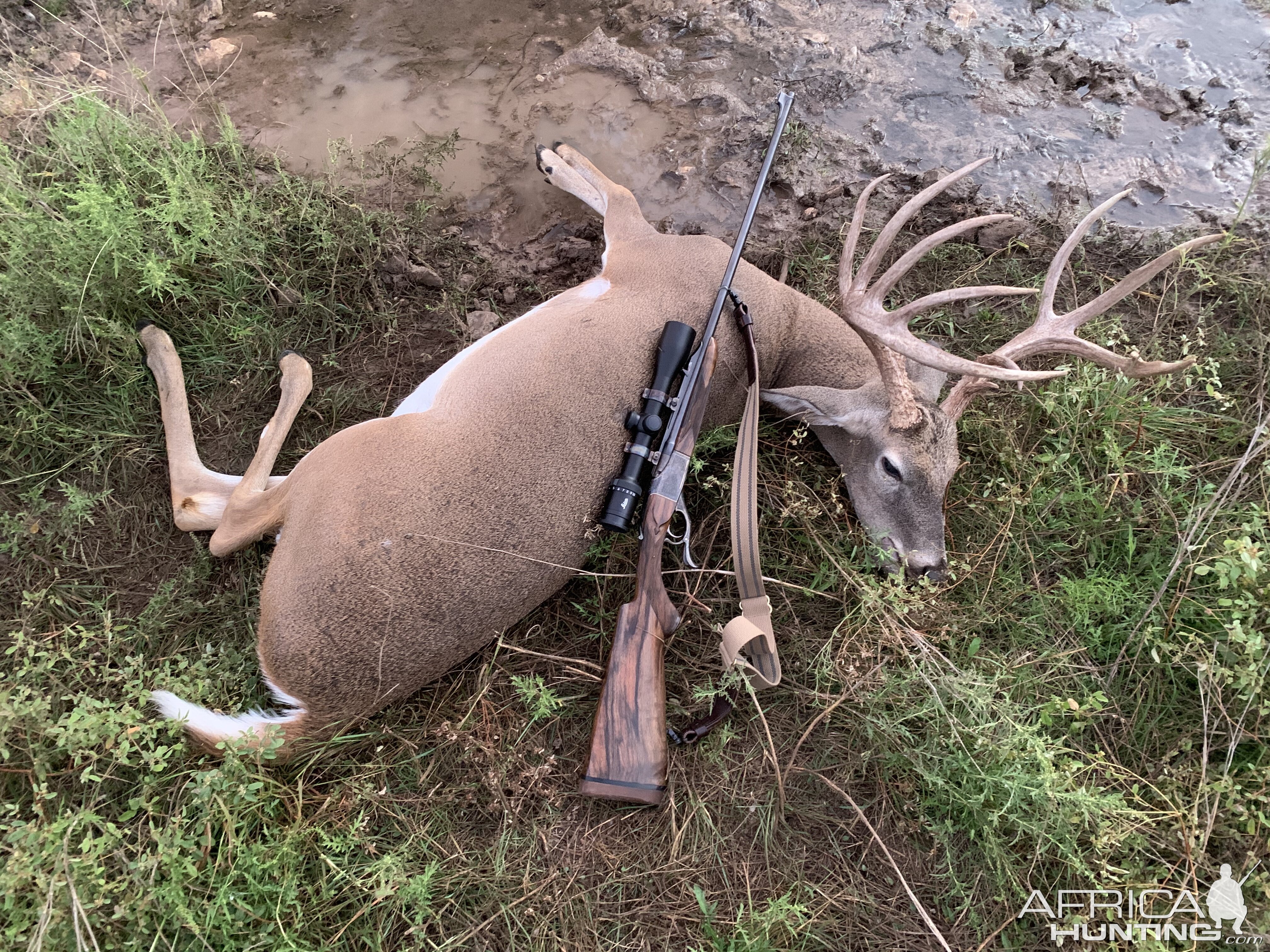 All would work well on plains game. But for dangerous game, I am going to continue to use rifles that offer a fast and accurate second shot. To date, I haven't been able to improve upon my S2 or R8.
Last edited: May 18, 2022
"We sleep soundly in our beds because rough men stand ready in the night to visit violence on those who would do us harm" American Novelist - W. Churchill

Red Leg said:
I love single shots as well. My current favorite "deer rifle" is a 7x65R by Bailey Bradshaw. http://www.bradshawgunandrifle.com/about-us.html There are several tricked out No. 1's in the gun room as well, including a Heym.

All would work well on plains game. But for dangerous game, I am going to continue to use rifles that offer a fast and accurate second shot. To date, I haven't been able to improve upon my S2 or R8.
Click to expand...

Tom, I agree with you and for some reason I have never taken a single shot to Africa. I may need to remedy that!
R

I fully respect your preference and choice. Besides the enjoyment and aesthetics there are some advantages to a single shot. Ease of load/unload, focusing hard on the first shot, accuracy potentially and I’m sure a few others. For PG I’ve brought a ruger #1 and enjoyed it immensely.

My slight hang up, personally, is speed of the second shot. Backing up your first shot. And most importantly to me safety on DG. You can hunt more conservatively with a single shot and take less risks but there are random events in hunting DG you can’t plan around.

Yes, I hunt DG now with a competent PH I trust completely. We’ve hunted together 12+ times. He has backed me on a total of one buff that was very well hit but we where 300m from the boundary river and that’s where it was headed.

I’m still the first line of defense for the team. The safety of the team is my responsibility. My PHs responsibility may supersede that but I’m responsible as well. A double or a bolt has the edge in this case in my opinion. I feel it’s my obligation to use the most effective tool I can in a potentially life or death situation.
C

I don't have any interest in DG hunting with one but I would love to own a mid caliber for PG and deer. I like the #1's but I would much prefer a classic like you have or one built by Bailey Bradshaw. I have a few Martini's, Farquharson's, etc. saved in my GI watch list which I drool over regularly. Someday.

Tom Leoni said:
Grazie, @Phil Giordano - I love these rifles and I feel that by taking them to Africa I'm (so to speak) giving them their soul back.
Click to expand...

Shure, you know...hunting "the way it was", in a so elegant and challenging manner, will add a lot to your personal experience. And you'll make those old gentlemen living again... I told you...pure magic!

You should use what you like it's your Safari and you should choose what tickles your fancy. As long as your aware of the potential drawbacks or advantages and accept them your golden. As for single shot rifles I believe they are nice but no more. For hunting I tend to use the rifle that offers me the greatest advantage to cleanly put down my prey. The best tool for the job philosophy. Regardless your single shots are exceptional examples.

Red Leg said:
I love single shots as well. My current favorite "deer rifle" is a 7x65R by Bailey Bradshaw. http://www.bradshawgunandrifle.com/about-us.html There are several tricked out No. 1's in the gun room as well, including a Heym.

All would work well on plains game. But for dangerous game, I am going to continue to use rifles that offer a fast and accurate second shot. To date, I haven't been able to improve upon my S2 or R8.
Click to expand...

I wish you’d stop posting pictures of that rifle, you’re going to cost me a lot of money!

For birds where there are multiple targets the single shot is a disadvantage and there is nothing more frustrating than standing there with an empty chamber as the next quail flushed from around your feet while you are watching the bird and trying to slip another shell into the chamber.

Now for turkey this spring I am planning to purchase a 12 gauge 24" barrel for my Encore. I have been hunting them with an Remington 1100 Magnum, but find that it has been increasing in weight over the years. With turkey here with the limit of one bird a year a single shot is all that is necessary and a lot easier carry.

Using a tool that I enjoy looking at and using gives me pleasure. I reckon hunting is the same, use rifle that you enjoy using. Yes there are a few limitations with a single shot but of course they will do the job if you do yours-put the first shot where it counts. Everything after the first shot is a bit of a gamble with a rapidly departing animals.

I am with you on this.. In the early 1900´s Farquarsons in .450/400 and upwards were used on DG.. When proper bolt actions (read Mausers) became available they faded away, for obvious reasons.

That said...Farqs are lovely and I would have taken great pleasure to hunt PG with one of them.. Tom has a very nice example in a great calibre.. .375 Flanged
"I have taken more out of alcohol than alcohol has taken out of me.” Winston Churchill

"Amani haipatikani ila kwa ncha ya upanga".. Peace is not possible except by the point of a sword..
You must log in or register to reply here.