What can you tell me about this gun? 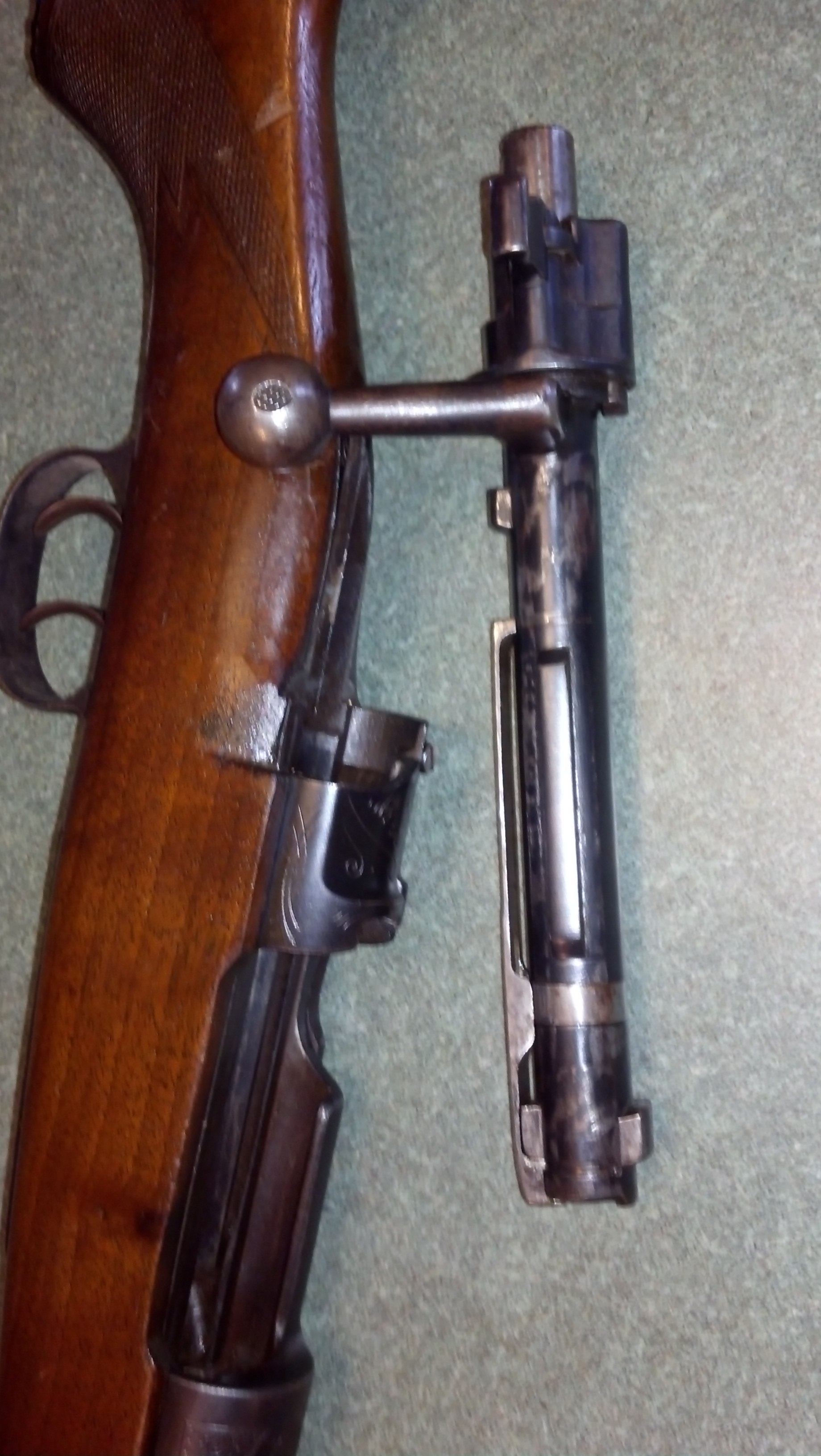 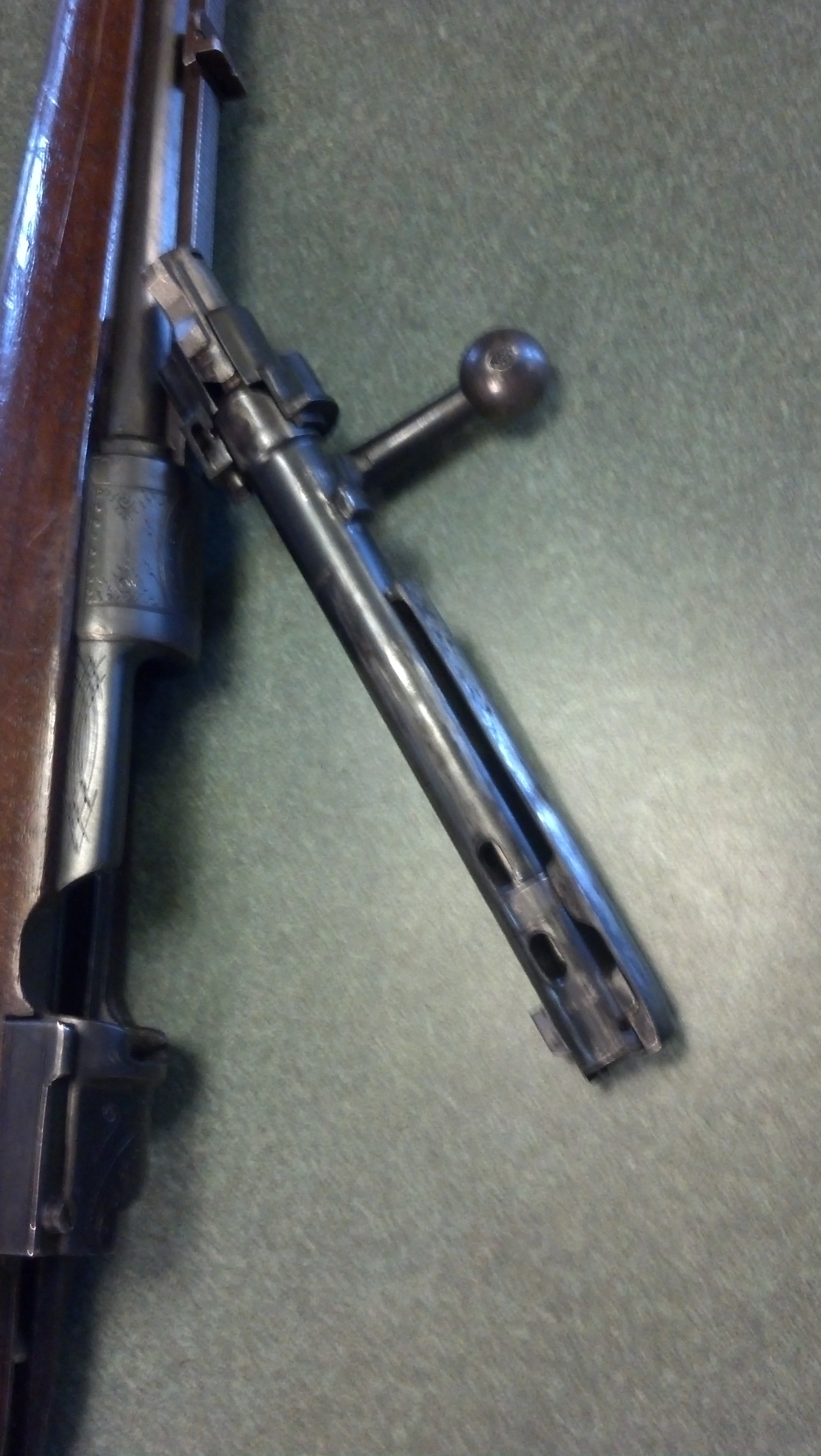 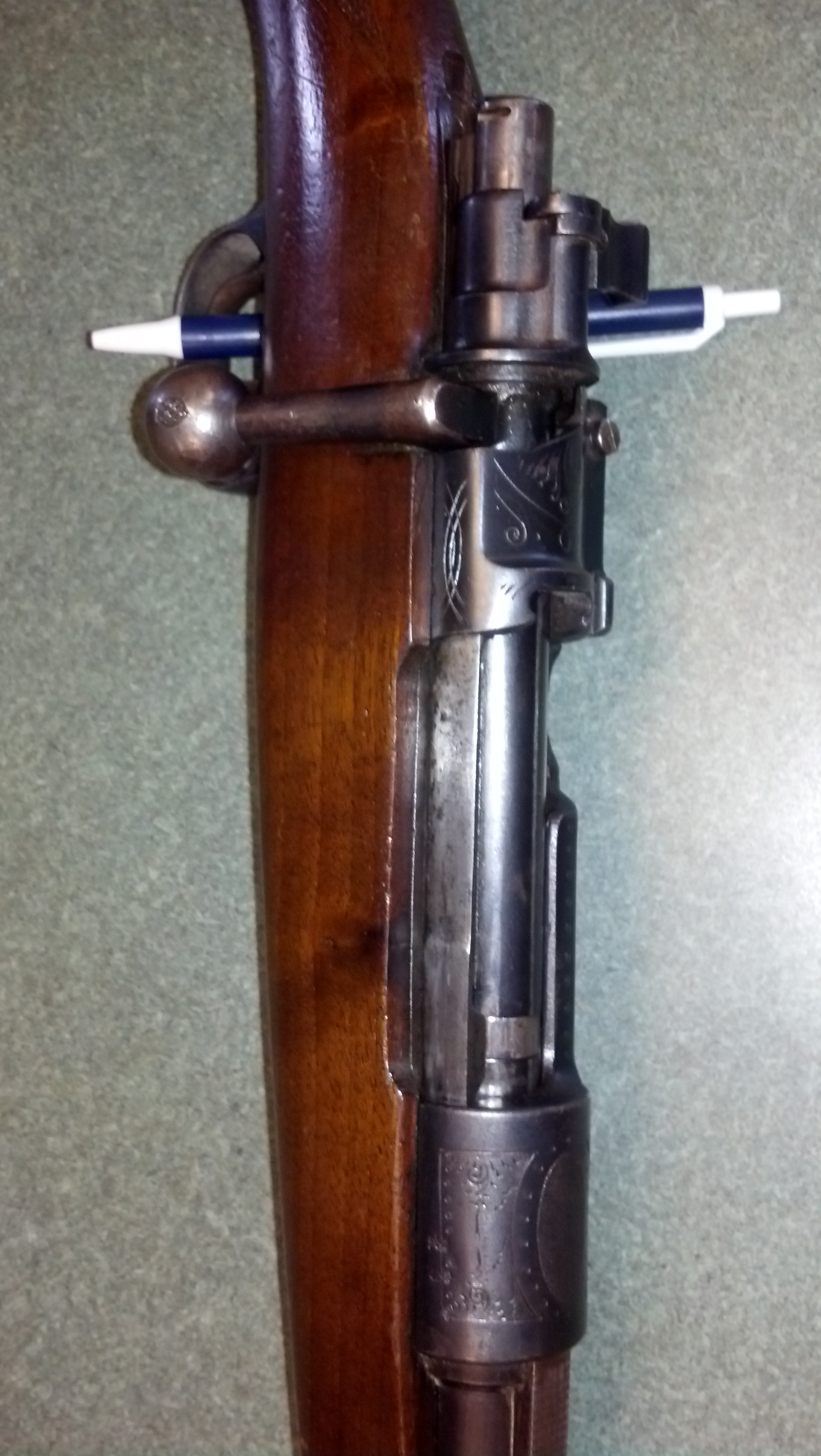 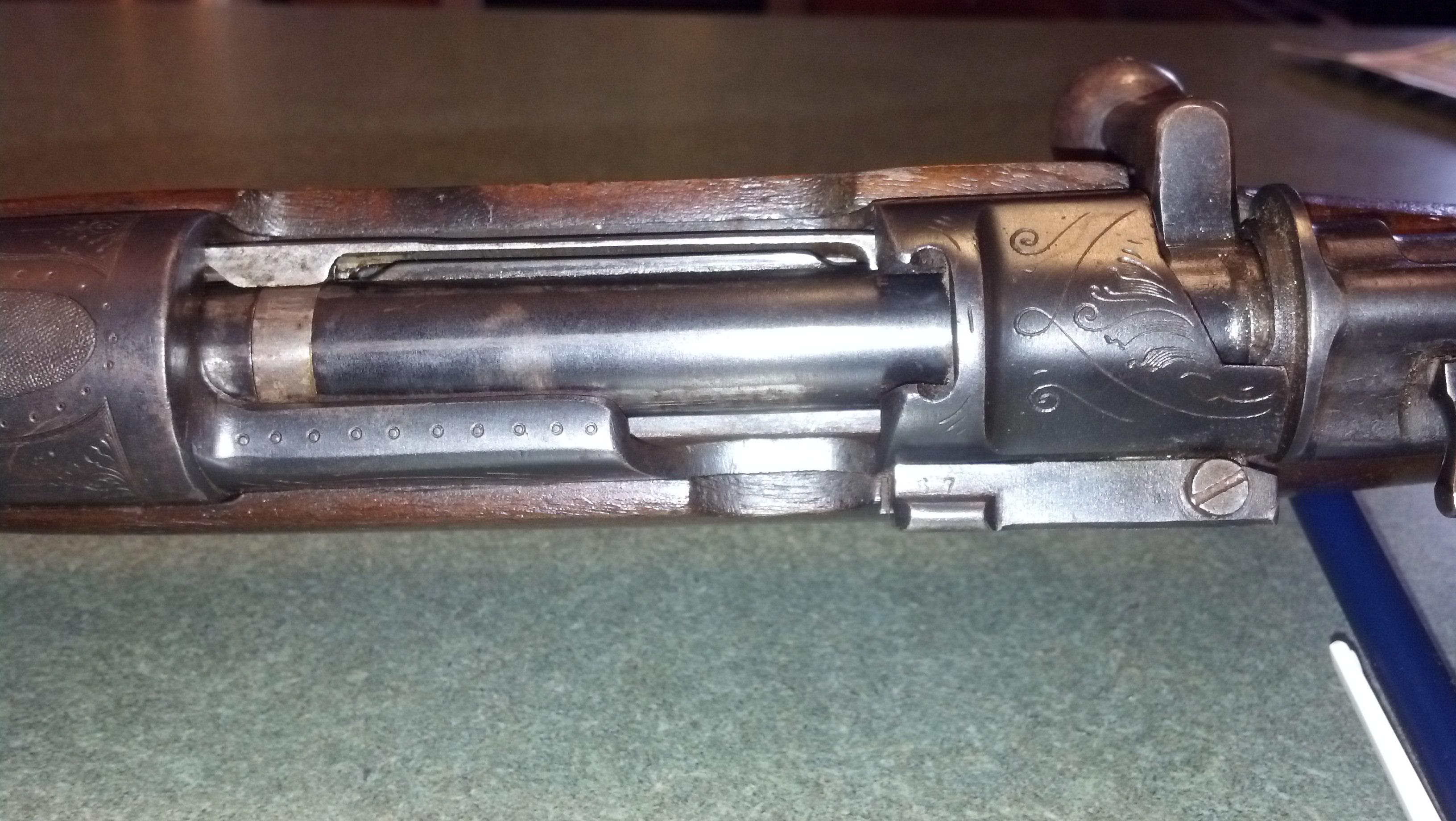 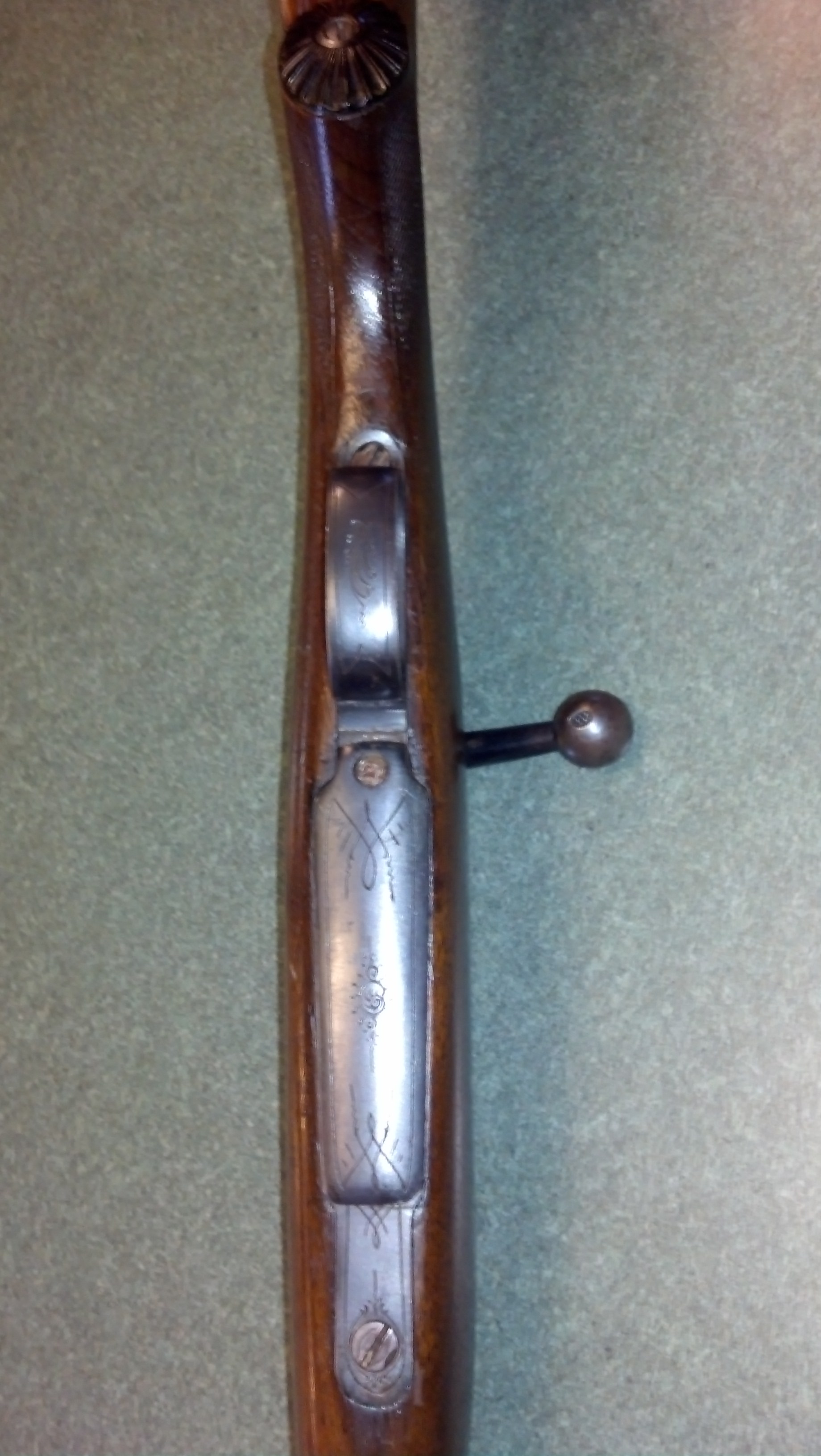 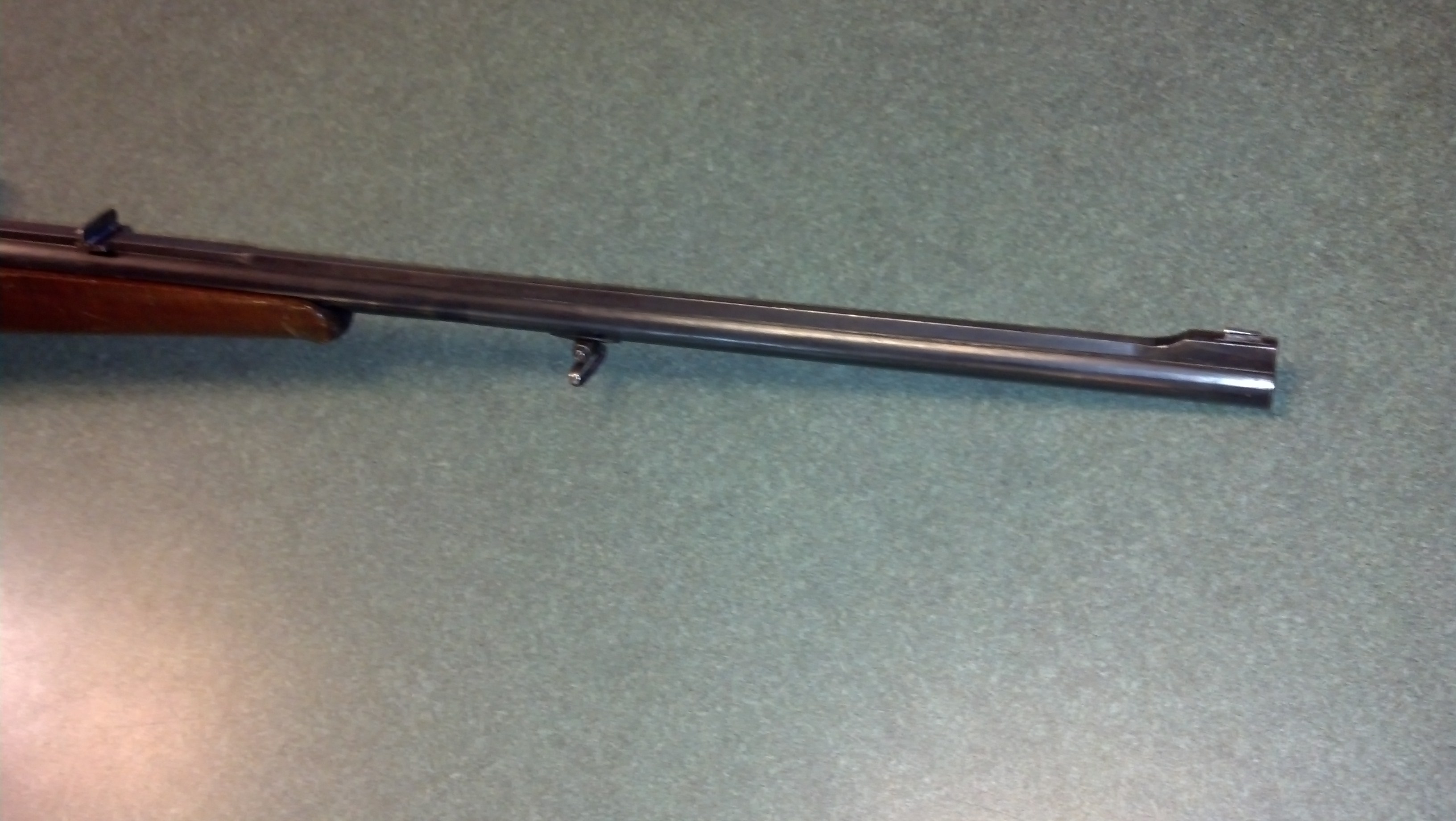 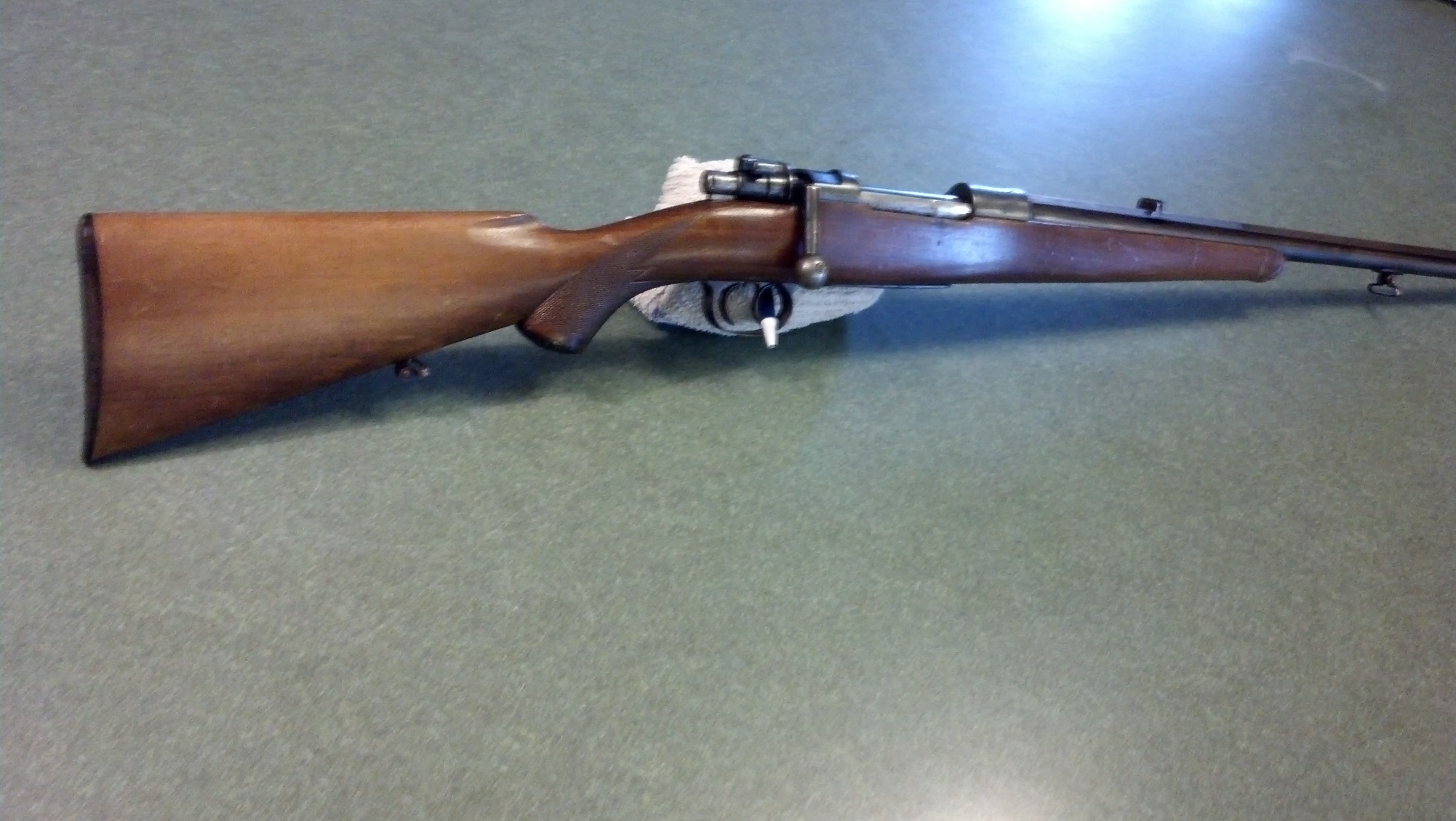 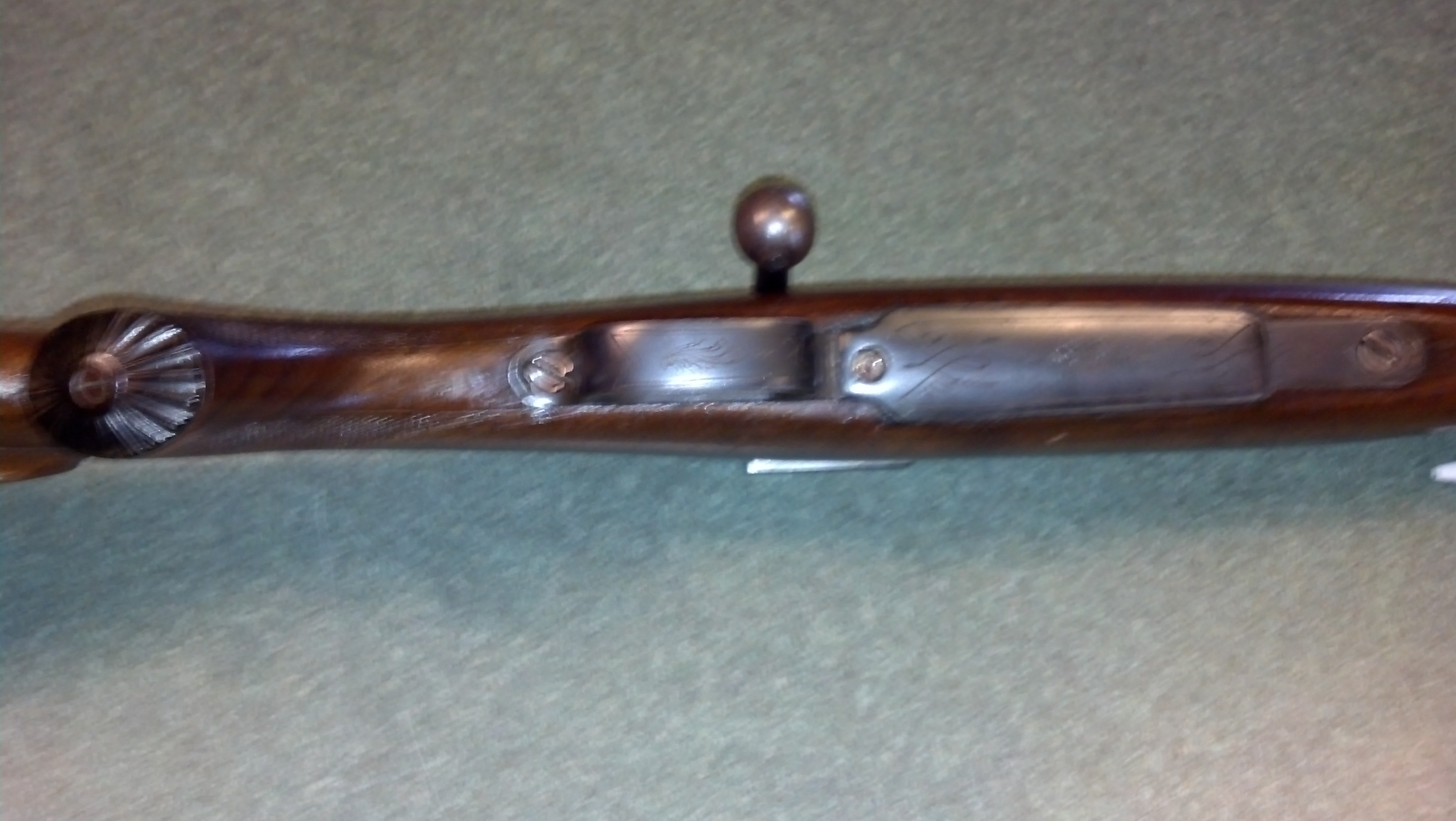 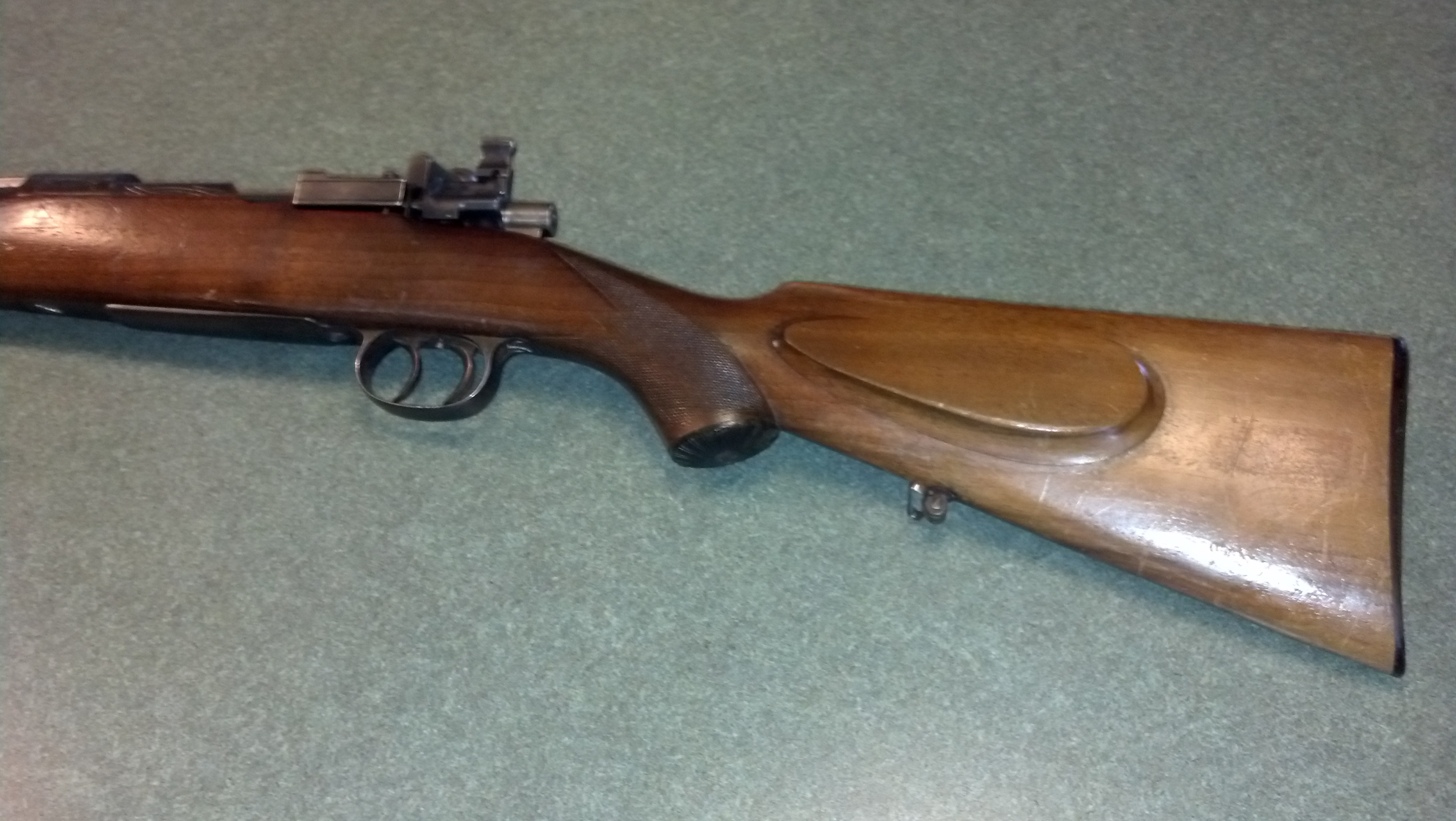 Found an old Mauser at a local shop. No serial number, no caliber marked, the bore measures .323 to .325 and it will nicely chamber 8x57 Mauser rounds so I am assuming that is what it is.

Has a double set trigger with an adjustment screw. Lots of engraving but nothing particularly spectacular. Has a rib all along the top of the barrel and a leaf rear sight with an additional flip up one for longer range, but no markings.

What can you tell me about it and what is it worth?

This is beautiful sporter with an octadonal barrel and a stock with a pistol grip. It could be so - called Plezier Mauser. Similar Mausers rifle used during the Boer War.
Witold

Bob it is a Persian Mauser, very sought after rifle amongst collectors. It's a VZ 24 Mauser action built by Brno. The double trigger might be an after market add on the gun. I got this information from a friend of mine who is a gun collector here in South Africa.

Wikipedia
The vz. 24 rifle[3] is a bolt-action carbine designed and produced in Czechoslovakia from 1924 to 1942. It was developed from the famous Mauser Gewehr 98 line, and features a very similar bolt design. The rifle was designed in Czechoslovakia shortly after World War I, featuring a 600 mm (23.6") barrel which was shorter and considered more handy than the 150 mm (5.9") -longer Gewehr 98. The carbine followed a similar trend in weapon design at the time, that a short rifle gave away little in ballistic efficiency at combat ranges, but was easier to handle on account of its shorter length.
During World War II, the vz. 24 was produced for the German armed forces during its occupation. The rifle was also produced in nearby Slovakia, a German ally and puppet state during the war.
The vz. 24 rifle was widely exported and enjoyed usage during and after World War 2, noticeably by Romania, Imperial State of Persia, Guatemala, China and others. Many of the contract rifles made for South American countries were chambered in 7mm Mauser or 7.65×53mm Argentine.
Last edited by a moderator: Jan 24, 2015
Hunting reports on AfricaHunting.com for LIMPOPO BIG GAME SAFARIS:
- https://www.africahunting.com/threads/south-africa-hunt-with-limpopo-big-game-safaris.45323/
- https://www.africahunting.com/threa...faris-lbg-safaris-hunting-with-friends.30042/

It actually has a round barrel with a rib along the top.

Also has what looks like a couple proof marks under the engraving?

The barrel is just under 23" to where it goes into the front receiver bridge. 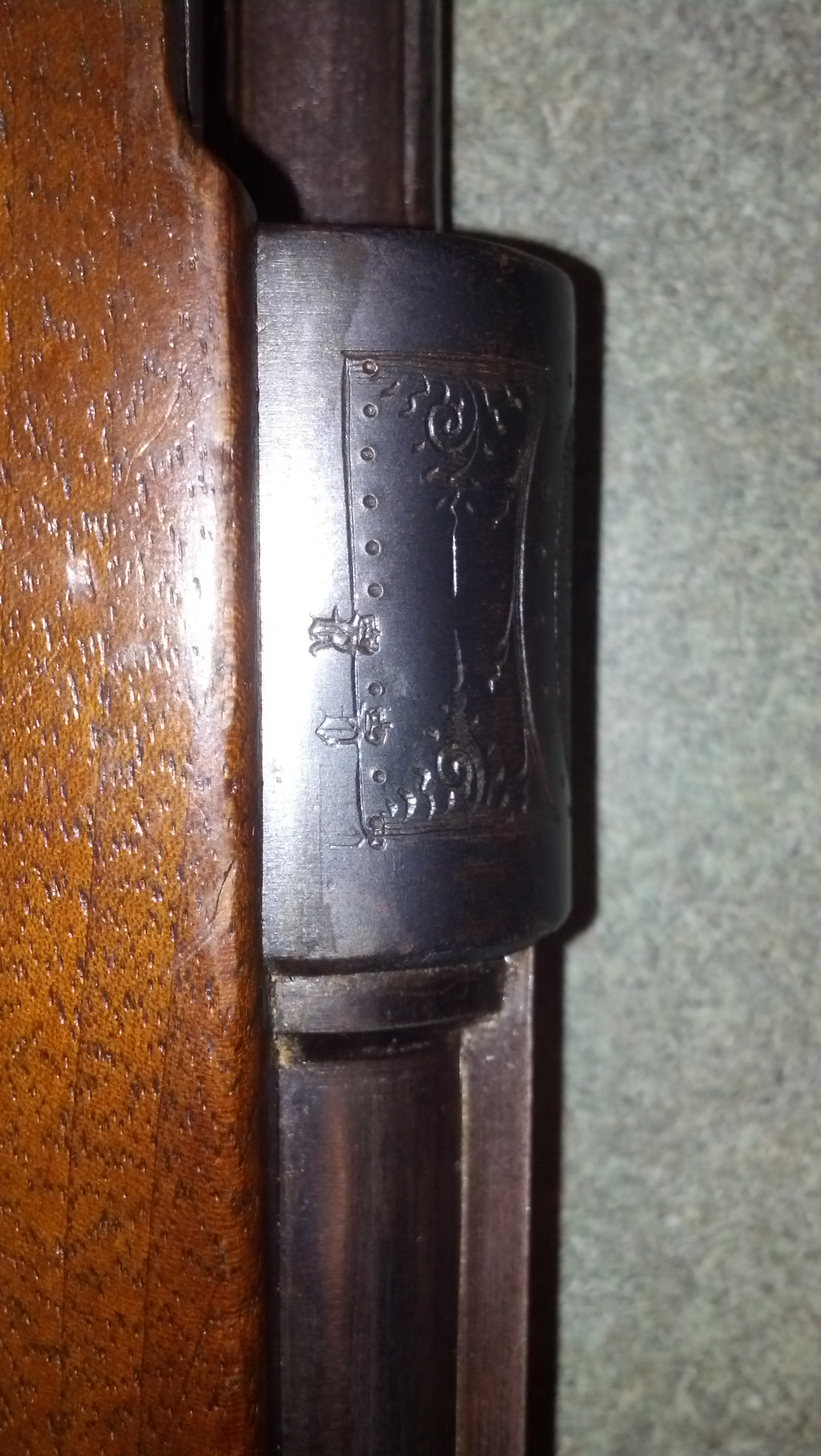 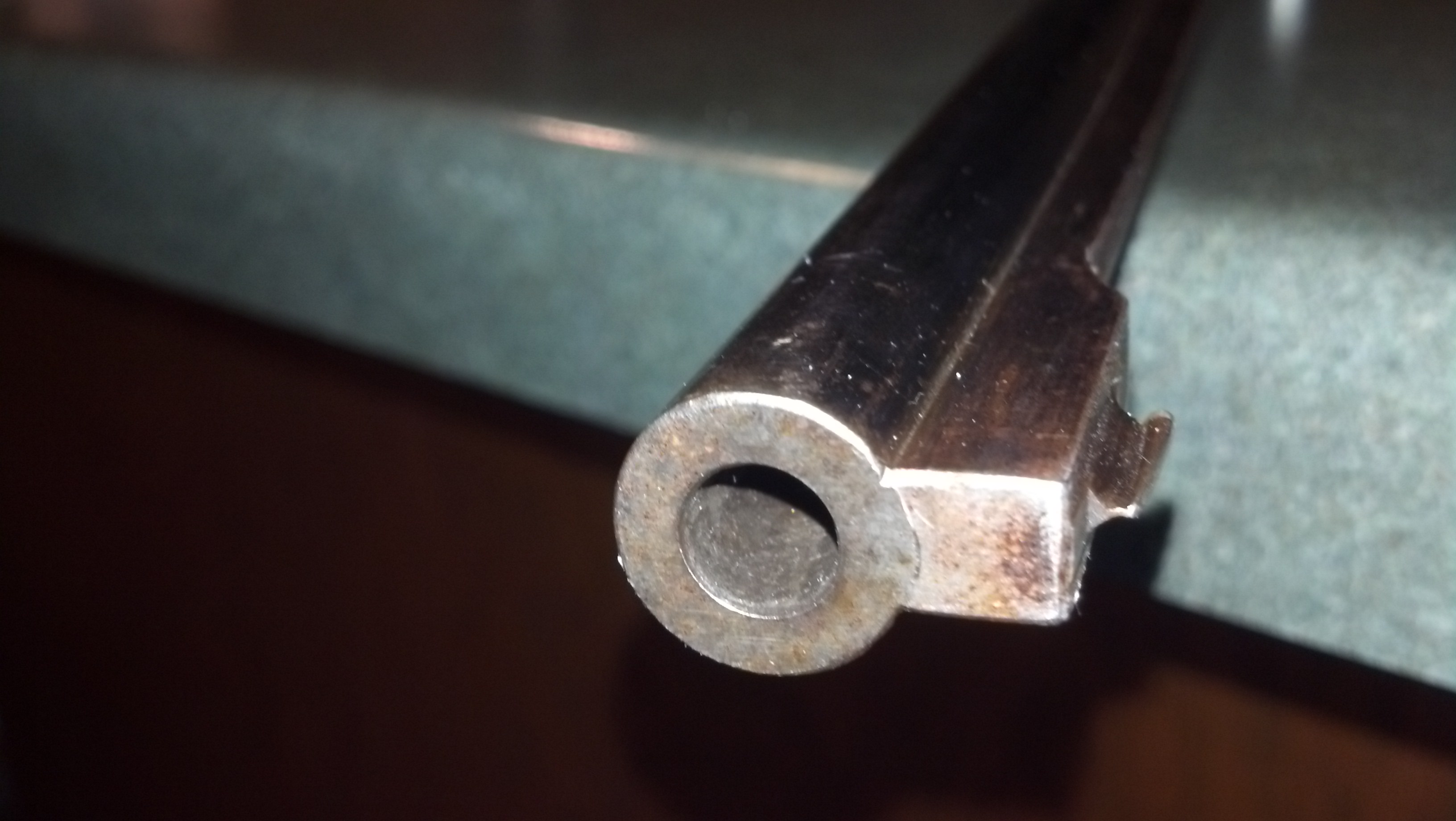 Interesting looking rifle! Except for the top rib it looked very close to the Mauser my uncle brought home from Europe after WW 2 and gave to my brother.
Z

The 60cm 'carbine' was introduced during WWI by the Germans because traditional carbine barrels produced too much muzzle flash and muzzle blast when used with the 7.92x57IS round. The 98AZ, which served as the prototype for the 98Kar, was simply the best compromise for dealing with what Goetz describes as an 'overloaded' round. Given the number of whinges that I get from mouse-rifle shooters when I shoot full-power 150gr 30-06 ammo from a 60cm barrel at one of their shoots, I have to wonder if a part of Cpl. York's performance in battle, was due to the reduced muzzle blast experienced by him and his mates from the 26" barrel of the M17 rifle that they used.

Yes, the shorter rifles were handier to carry but the shorter length resulted from the creation of what was (in the 20th century) a significantly over length carbine for the Imperial German Army.
A good shot at close range beats a 'hit' at a longer range.

ActionBob, you need read an article by The Mauser Sporter-Mauser 98-08 and Other Sporting Rifle.
Witold

Very nice rifle in a great calibre....I would have bougth it...
"I have taken more out of alcohol than alcohol has taken out of me.” Winston Churchill

ActionBob, this is an article by the internet.
Witold

The engraving is 'entry level'. The pistol grip it 'tacky'. Spend your money elsewhere.

Without being able to see the proof marks, I am 99% sure it is a typical German pre-war "Guild Gun". These were outsourced by vendors to gunmakers and by individuals who wanted a rifle built. The vendor often had his name engraved on the top rib. (This is similar to what Charles Daley did importing Lindner guns from Suhl during the early years of the 20th century.) They were all generally patterned on the Mauser Model B sporting rifles coming out of Oberndorf. Some are indeed 8x57JS's (.321 bore) - but many are the earlier .318 bore. I would be sure and actually slug the bore - you do not want to launch a "S" down a "J" bore. These tend to be solid old sporting rifles. Judging by the stock, checkering, and minimal line engraving, this is a basic model. They are fairly common in this country. Some made it here before WWII and many were "liberated" by returning GI's. Assuming it has no issues and depending upon condition (condition is everything), a basic model will typically sell for around $750 to $1250.
"We sleep soundly in our beds because rough men stand ready in the night to visit violence on those who would do us harm" American Novelist - W. Churchill

Thanks for all the info guys!

Sure wish it was a 7x57 or 9.3x62 but will need to find out. If it is is an 8x57 at least I can buy ammo... I think it is a cool old gun so I'll see if I can figure out the chambering for sure and see what kind of shooter it is. It does seem to function well but needs a good cleaning.