Catahoula said:
I had myself convinced to just stick with my Howa 30-06, but......I just won an auction for a Howa in 375 Ruger, so it looks like a pair of Howa's will be making the trip. Not the traditional caliber that I was originally looking for, but my Howa is a shooter. I've been shooting 3-4 rounds a few nights a week from unknown distances from improvised field rests. Here are today's results, resting against a tree at approximately 90 yards. 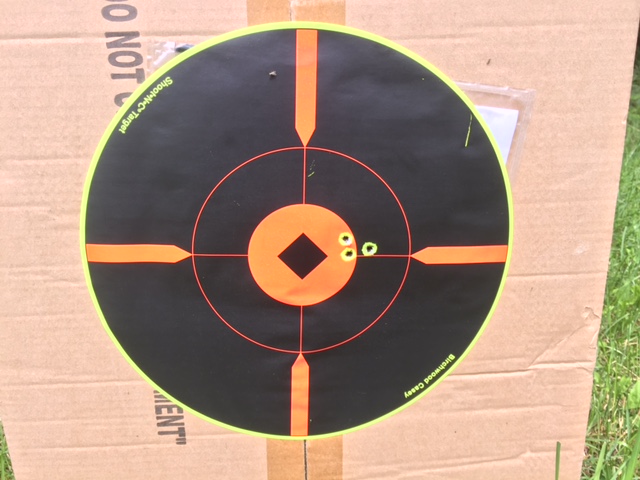 Ok, so when I blow the whistle you hit the ground get up fast!

Sorry, its getting close to start of football season in Texas.

That there is good shooting and it sounds like a good training plan.

You do just need to get the other guns and go on more trips. Remember guns don't mind living in the same house with each other.

Reviving my old thread.... As I said, I had myself convinced to just use the 30-06, then bought a 375 Ruger. Well, I sold it already along with the bullets. But, I just found a good deal on a No. 1 in 9.3x74 with a couple of boxes of ammo. My 06 shoots 200 grain partitions very well, but I keep thinking that the wildebeest and zebra won't mind a little more oomph. Somebody talk me out of buying another rifle! The 30-06 is plenty, right?

Nothing wrong with a bit more poop, but yes the '06 is enough. However the No. 1 in 9.3x74 is a neat rifle, I have one and it shoots very well. Besides you cant have too many rifles!

200 grain partitions out a 30-06 will be plenty for both zebra and wildebeest. My wife took both with her little Ruger Guide gun with only a 20" barrel and she used 150 grain GMX bullets. Laid both out dead in one shot.

Having said that... I have to agree 100% with what @sestoppelman just said!

Your 06 will do the job you have asked of it. However the 9.3 is just a great calibre and in a #1 you can load it a bit above factory specs. I have taken everything from Diker to Eland with the 9.3x74 in a single or double rifle and can highly recommend the 9.3 in either the74R or 62 format; they are my favourite mid bores . I also 3rd the recommendation of sestoppelman.

AZDAVE said:
Your 06 will do the job you have asked of it. However the 9.3 is just a great calibre and in a #1 you can load it a bit above factory specs. I have taken everything from Diker to Eland with the 9.3x74 in a single or double rifle and can highly recommend the 9.3 in either the74R or 62 format; they are my favourite mid bores . I also 3rd the recommendation of sestoppelman.
Click to expand...

I agree with Azdave.
Witold

yup @Catahoula just stop pi--ing around and get a 9.3x62 or 9.3x74r and join a discerning group of people

spike.t said:
yup @Catahoula just stop pi--ing around and get a 9.3x62 or 9.3x74r and join a discerning group of people

the #1 weighs about 7lbs add a scope and steel rings brings you to around 8 lbs. rather light for a 9.3. Ses and others gave good advice. I took a 7mm mag with 160 a-frames and it zipped clean through a very large zebra and almost through a huge wildebeest. A 3006 with quality 200gr will do the job easily without kicking the snot out of you. Shot placement is key and most of us shoot light kickers better.
Any government big enough to give you everything you want is strong enough to take everything you have
B

Take the 9,3 x 62.
This caliber was designed over 100 years before in Berlin, for the German teretories in Africa.
Specialy for the cats and the big antilopes.

And since then this caliber works great.
I used it on several safaris in Africa.

Just use what you shoot well. Shot placement is King. I found I shot my 375 H&H better than my 30-06. Result is my 30-06 is up for sale now.
The Empire was built on cups of tea. When in doubt, fear, joy or any other human emotion tea is to be drunk.
L

I weighed my No.1 9.3x74 just now, and with scope, sling and one round chambered weighs in at just 9 pounds which is a good weight for this power level. I have fired it from the bench with 286 gr loads and its not bad at all. Funny thing about these critters. I watched my brother toodle around Namibia on his first safari knocking critters down with one shot apiece from his .300 H&H mag and playing the one shot wonder, big Bwana. In fact I nicknamed him Instant Bwana, Just add blood! He had never killed any game before his safari. Pretty soon he knew all about it of course. But when he tangled with old blue eyes, the gnu, well lets just say it took 5 rounds to finish it off. I welcomed him to the club. What club says he? The, "they don't always fall to one shot club", says I. Now conversely my boy on his first safari last year took his blue wilde with one shot using a .284 Win, about like a .270 Win, much less power than Bwana big bro's .300H&H. What does it prove? Nothing really, except to once again point out that shot placement is nearly everything assuming adequate power levels and good bullets.
A

Im of the belief that its better to have something and not need it than need it and not have it. I am also a fan of bigger guns so take what I am about to say with a grain of salt. Shot placement is important but I don't believe it to be the end all be all. A few years ago in Florida the police shot a man 4 times in the head before he went down and they were using 9mm. Im not saying that he wouldve went down with less shots from a 45acp or bigger but it definatly couldnt have hurt.
Amon458

Those 4 shots apparently missed the brain.

Personally i would rather search for a new .375 H&H. The other two calibre's are great but i think the .375 is the one to go for.
You must log in or register to reply here.

Seinfeld Voice What is the deal with 375 Ruger?
2