In the soft cool light of early morning that belies the heat that the sun will bring as it rises over the Indian Ocean we make our way up the mountain that will bring us within sight of Lake Jozini. The little Land Cruiser struggling under the weight of the boat that is twice its size. My safari jacket feels welcome but I know that I will soon shed it as the heat builds over the mountains of Kwa Zulu-Natal. I have time to think as the Cruiser struggles toward the lake, what a wonderful week it has been so far, a beautiful old dagga boy in the salt, two running fights with black mambas, a bit of a fright with a mama rhino, and our stay with Harloo Safaris in the most wonderful safari camp we have ever seen.

I had promised my wife that this would be the last trip to Africa. I made the promise in good faith, but as I contemplate, I know that this is a promise I cannot keep. As we break the top of the hill the change in the engine pitch snaps me out of my thoughts and I look up to see the lake shimmering in the early light of morning. The rest of the road is downhill and the little cruiser soon has us at the water’s edge. Just like every other task since we have been here, our PH and his assistant will not allow us to help. We would probably just be in the way anyhow, so we hopped in the boat. With everything loaded we headed across the lake towards a tremendous bluff that drops off into the lake.

Brian Suddaby, our PH told us that he and Albert, his assistant, had caught many tiger fish from this area in the past. We anchored in a cove of clear water that was ringed by weed beds along the shore. Our previous trips to Africa had taken place during the winter months and had been in the drier western parts of South Africa. This time due to work and school we have came at the end of the hunting season, and to the eastern part of the country. The green mountains of Zululand are lovelier than my capability to describe them. Using live tilapia for bait we set out several rods and sat back to watch them as the sun made its appearance over the mountain. After a time one of the rods dipped down violently and I jumped to grab the rod Brian yelled, “Let him run and then set the hook hard”. I counted to five and heaved the rod back; a full 100 yards out a magnificent tiger fish hurled its entire body out of the water.

The fish and I played a tug of war with the line, sometimes I took line, and sometimes the fish took line. “Keep pressure on him”, yelled Brian. Finally I fought the fish to the back of the boat and just as Brian grabbed the net the hook pulled free. I was sick and exhilarated at the same time. I had had the thrill of fighting a tiger fish but I would have dearly loved to have touched it. We had a few more bites but no more hook ups. The heat and the wind were building with equal strength when it was decided to find a more sheltered area. As we motored across the lake animals were coming to water; zebra, wildebeest, impala, a mother rhino and her baby.

Ducks and geese lined the shore and I asked Albert why they were not on the water and he answered by pointing out a 12 foot croc as it submerged. I retrieved my binoculars from the front of the boat to get a better look when I noticed something on the side of the hill, elephants! What a great sight, this was the first time I had ever seen a wild elephant. There was a mixed herd of about twenty cows and calves feeding in a grove of trees with a lone bull about 200 yards from them. We watched them for a time while the big croc came up to look us over and then we headed back up the lake to find a calm place to eat lunch.

“We had a good rain last week so the water is a little stained on this end” explained Brian. “See that point over there? That is where the Pongola River comes in, it’s not a bad place to fish but it’s infested with crocs and hippos”. We pulled into a little cove and decided to set out lines before we unpacked lunch. We set up the top on the boat while the PH’s threw the lines back out. A female rhino with a tremendous horn and her half grown calf came to lie in the mud and give us another photo opportunity. With the lines out we opened the picnic basket and began to spread out the bread, meat, fruit, and cheese. Before we had time to make our sandwiches a tiger fish began taking line. I grabbed the rod just about the time the tiger went airborne, and just as quickly it was off.

I was beginning to doubt my ability to land a fish when my wife poured salt in the wound by announcing that since I couldn’t land one that she would get the rod on the next strike. No sooner were the words out of her mouth than one of the rods began to bounce crazily. She grabbed the rod and set the hook and a huge tiger broke the surface. Both the PH’s and myself (even though I had not been able to land one) were shouting instructions to my wife as she fought the leaping fish. We made so much noise that the momma rhino and her calf were dashing around and snorting at their mud nap being disturbed.

After several more leaping line burning runs Brian dipped the net and captured this fantastic fish. It is hard to describe a tiger fish to someone that has never seen one, but imagine a striped bass with the dentures of a piranha. Four point two kg shouted Brian as he weighed the fish. “Tammy, you must have this fish mounted” he exclaimed. “No, let’s turn her back” she replied. “Tammy, this fish is over nine pounds, it is bigger than any of us have ever caught out of this lake, you must have it mounted”. Not giving an inch, “let’s get her back in the water, she replied. After a few photo’s Albert reluctantly put the fish back into the water and watched it swim away.

I am very happy for my wife, but I too would like to land a tiger. I don’t have long to think about it before another rod begins to bounce. I set the hook and immediately know that something is different. The fish on the end of the line is trying to stay on the bottom, and while pulling hard it is not taking any line. I fight the fish to the back of the boat and Brian quickly nets it. It’s a barbel; it looks amazingly similar to a catfish that might have been caught in Oklahoma except for the fins running all the way to its tail. Well, at least I landed a fish even if it isn’t a tiger. We began to munch on sandwiches that were now hot enough that the cheese had melted. 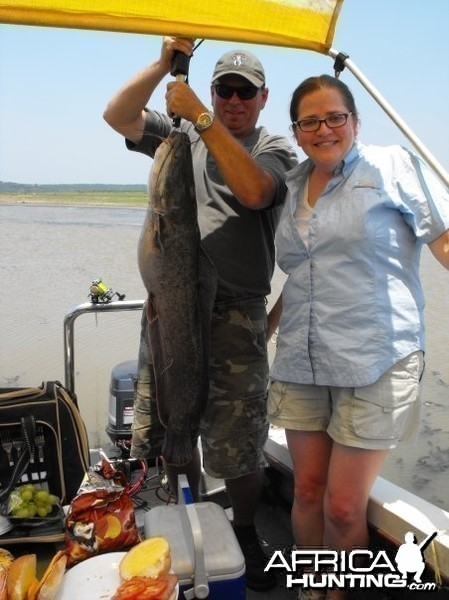 Looking at our watches we realized that we had non-stop action for over an hour and a half. No sooner than I finished my food another fish hit one of the rods. At first I thought that I had hooked one of the crocs that were in the area, I would gain some line and then lose some line. Finally at the back of the boat Brian dipped out a 19 # barbel, although not a tiger it is a heck of a fish. The next fish I catch is a tiger, but there is a problem, it has an old injury to its bottom jaw and while it has a big head and teeth its body looks about as big around as a broom handle. Just great, I catch the only anorexic tiger fish in Lake Jozini; I take my picture with it anyway.

We continue to catch barbel while we turn a lovely shade of red. We take our picture and label it “Sunburned and happy Thanksgiving Day”. After an hour with no bites I began to think that a nice tiger fish for me is out of the question. Suddenly the fish began to bite again, a miss, a barbel, and then miracle of miracles’ I have a tiger on. He jumps out of the water the moment he feels the hook. I am petrified that I will lose this one so I really put the pressure on him. He jumps out of the water time after time and I am just about beside myself when Brian slips the net under him. High fives all around, he’s not huge but a solid three pounder and beautiful. 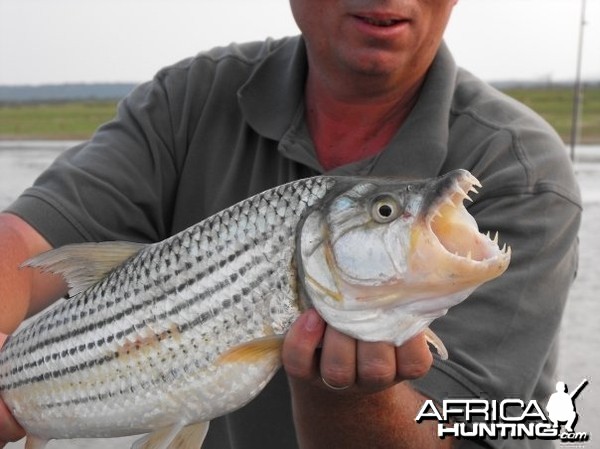 The PH’s and my wife are very happy for me, although my wife does point out that her tiger fish is three times the size of mine. At this point I am just happy to have had the opportunity to have a wonderful day of fishing in Africa. As the sun begins to set we head back and load the boat. As we are driving up the hill away from the lake I am thinking it could not have been more wonderful, but I am wrong. From on top of the hill we look back down on the lake and see 30 cow and calf elephants walking across the flood plain to water and three bulls already on the shoreline. I will have to tell my wife I lied to her when we get back to camp, but I think she already knows. 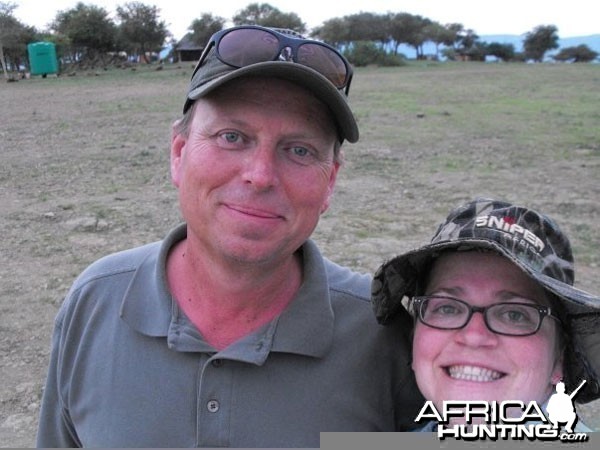 Awesome storie, would love to see some of the photos.

Congrats on landing a tiger.

Definitely on my to do list.
Under African Skies

Awesome story, you never let us down Jaustin!

The pictures did not post exactly like I wanted them to, but you can see what they look like. Thank you for the kind comments on my story. Jim

Just reading this story for the first time. Great report. Sounds like fun times.
And here I am, returning to Africa of many faces;.... the sloe-eyed temptress with flowers in her hair who stole my youth and my heart, and left me an old man with a kaleidoscope of conflicting memories of many dashed hopes and some fulfilled dreams. E. Echols
You must log in or register to reply here.