My spouse and I just returned from Spain and one of our best vacations ever. We have been a number of places in Europe, but truly enjoyed Madrid , Toledo, and, of course the Gredos Mountains. I knew quite a bit about European hunting generally after spending 5 years in Germany where I was fortunate enough to hunt a great deal. Spain is similar (essentially the same trophy system) but the hunters and hunt itself is quite a bit less formal. I am confident most Americans would feel right at home with the typical outfitter and game keeper who normally will act as the actual guide. Mine was a Hemingway fan, as am I, and he showed me several of the settings in "For Whom the Bell Tolls" during our down time. Very cool to be walking the same ground as Papa in '31.

I hunted with "Great Spanish Hunts" http://www.greatspanishunts.com/en/ whose owner, Ignacio, I had met at DSC last year. We were met upon landing at Madrid and were whisked through customs and weapons registration (even though I was using a rented rifle) and away to the estancia which is only a bit over an hour from the airport. Our base was the family ranch home which is in the foothills and has been in the family since the late 19th century. It could not have been more comfortable. Ignacio's sister hosted us and acted as Nancy's driver and guide while I was hunting. I am happy to report that my bride made a meaningful contribution to Spain's economic recovery at the area leather and embroidery shops.

We drove about 40 minutes into the mountains from the ranch to meet our guide who worked for the National Park in which the hunt took place. This was a purely free range environment. We stepped off about nine o'clock and returned to the land rovers around 4:30. According to my I-phone we had done 21 kilometers - half up the mountain and half down. It thoroughly kicked my jet-lagged rear - but what a glorious experience. It was cool and cloudy with bits of mist occasionally rolling through. During that first day, we saw around 20 rams. I was contracted for a bronze, and though several met that criteria, Carlos was determined to find an ancient one which kissed the silver category. 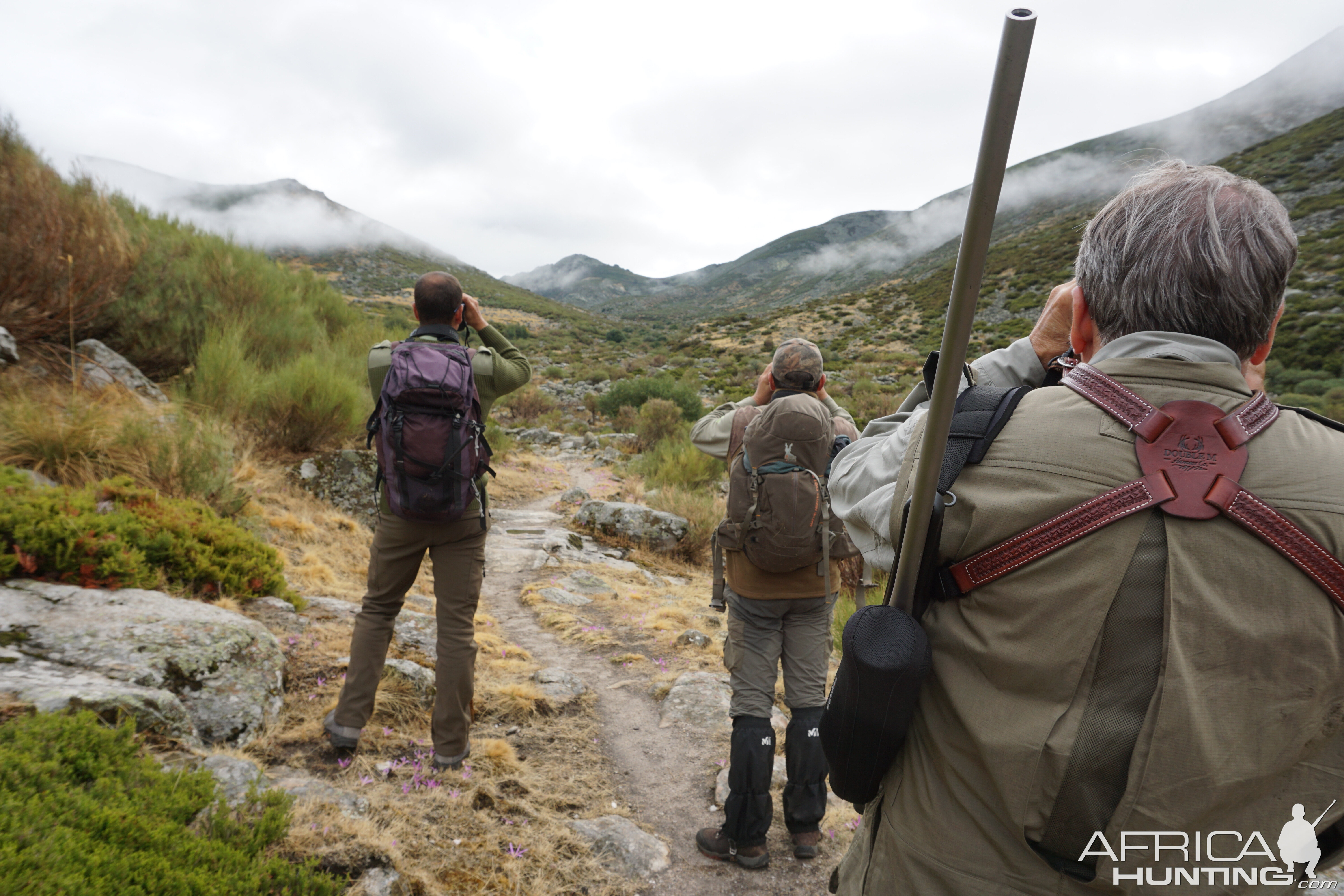 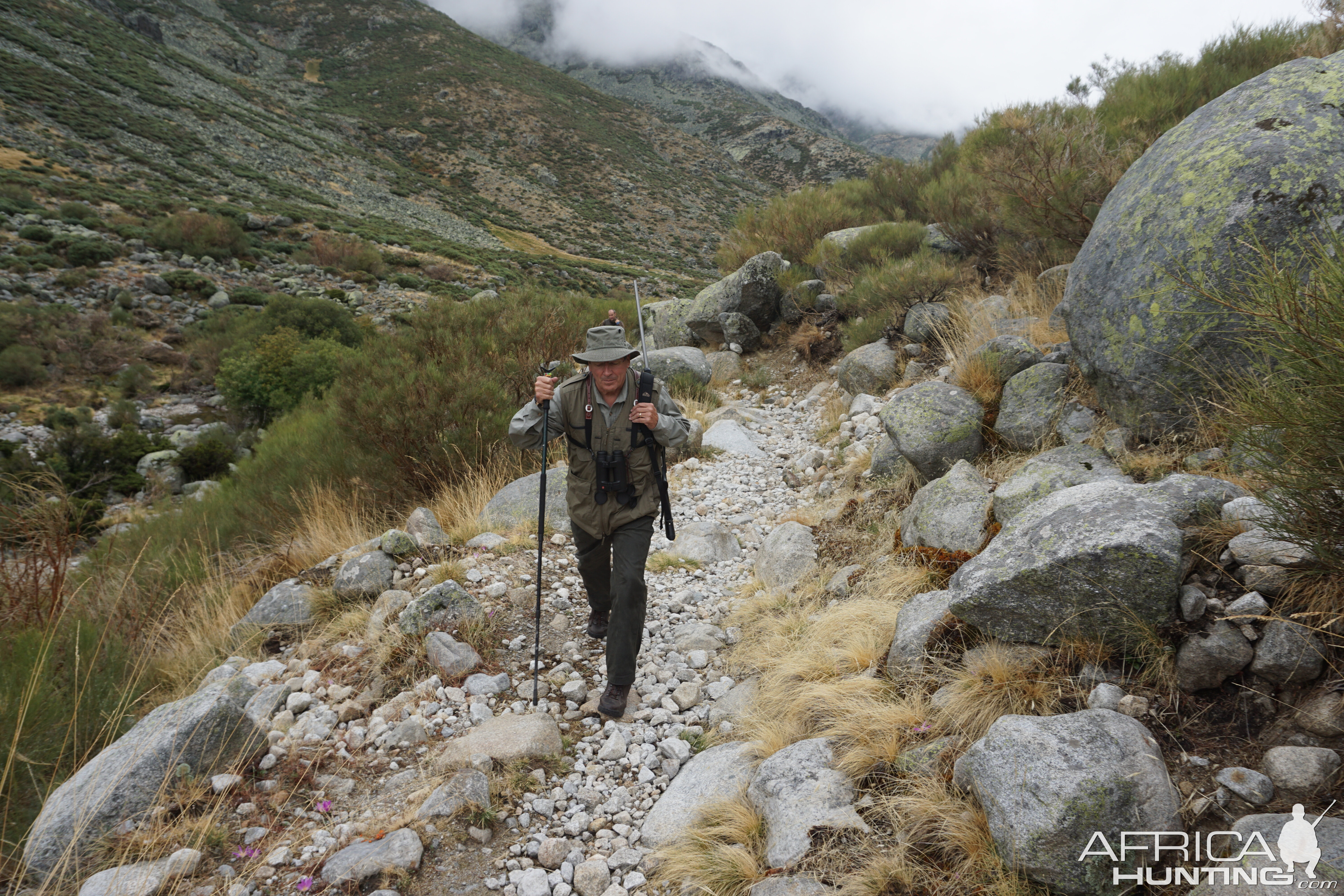 The next day we went to a different and higher area. It was almost alpine looking. We were immediately into Ibex, and around noon spotted an ancient fellow which satisfied Carlos (any of a half dozen would have made me happy!). We made a quarter of a mile stalk along the ridge to get set up for a shot. I am happy to report that my loaner Browning A-Bolt in .300 WM performed as advertised and dropped the ram in his tracks. He was an ancient thirteen year old high bronze which will easily make SCI silver were I so inclined. I am pretty sure Carlos was as happy as I was, and certainly no one else was carrying the ram off the mountain. 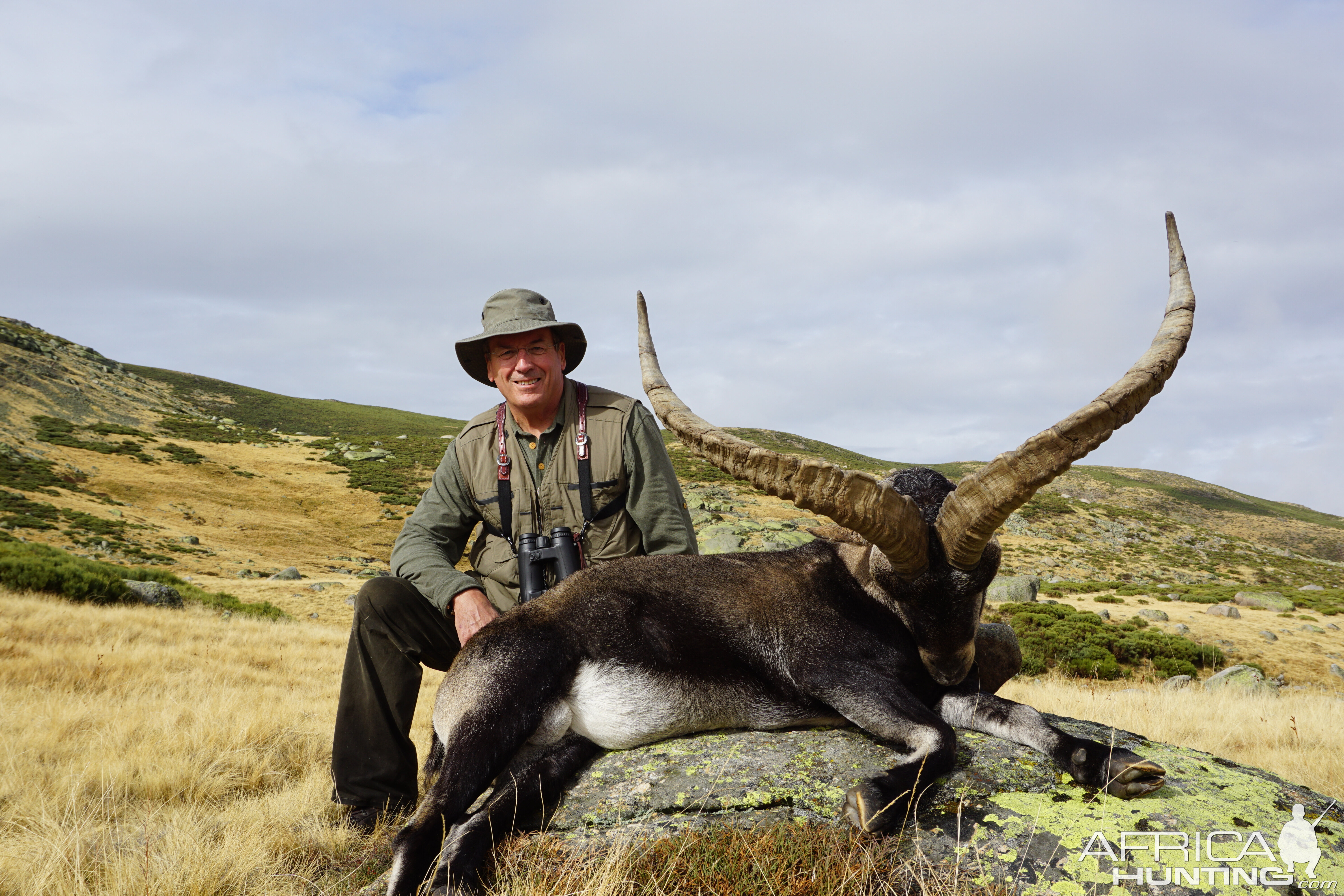 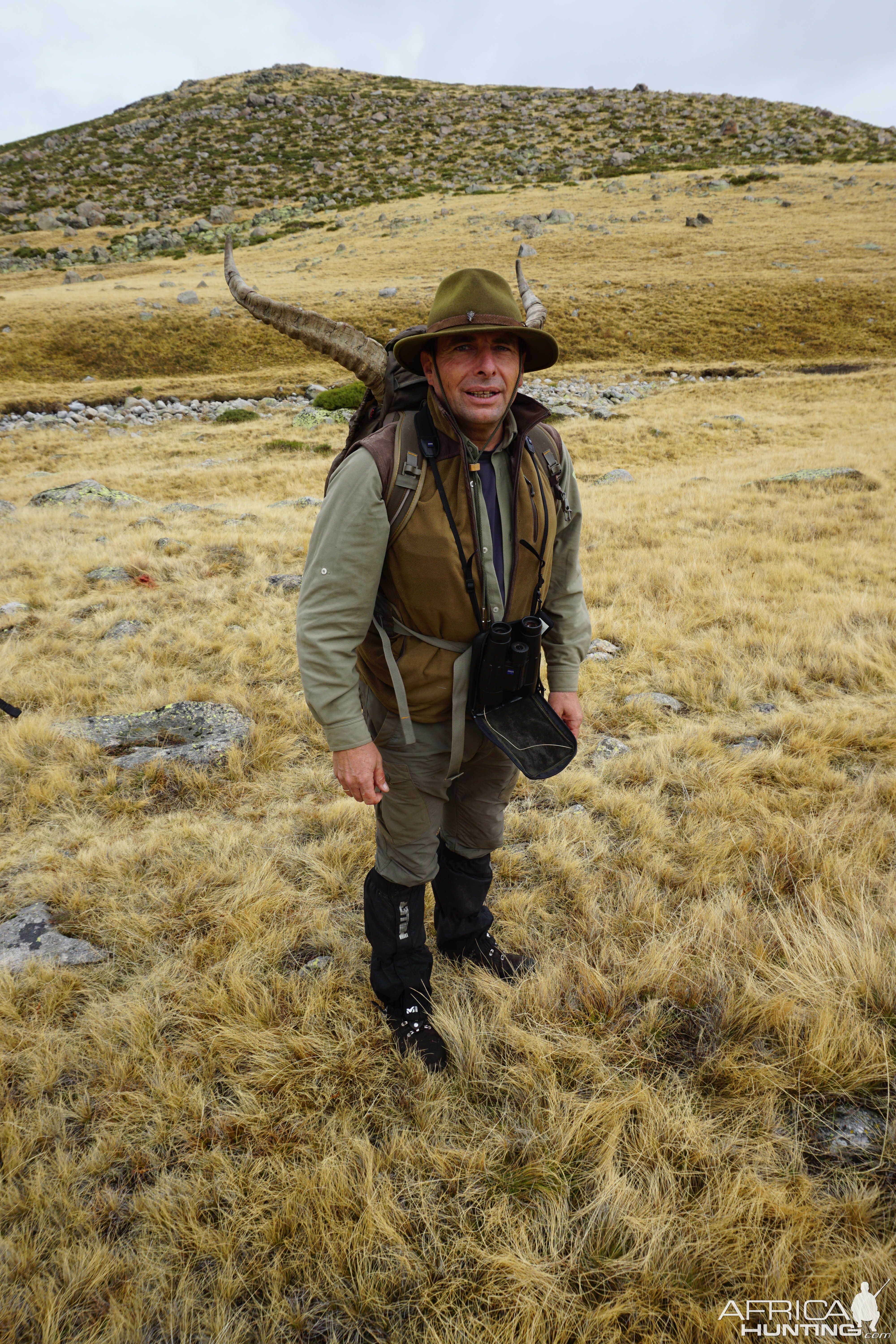 We were both really sorry to leave the mountains for the tourist phase of our trip, though for me, stalking through the Prado was every bit as interesting as pursuing an Ibex. Madrid is one of those unique large cities with a small town feel. We ate wonderful food, had glorious wines, and all too soon were on our way home. Did I mention the exchange rate is the best it has been in years?

Spain is an experience I highly recommend for a couple where an incredible hunt can be paired with vacation which both will enjoy and long remember.

And sorry about being so technically challenged that I could apparently only post the link. :-(


At the start of the hunt, I was asked if I had any objections to the Spanish Park Service sending along a videographer to film the hunt for a program which would run on Spanish TV. The idea was to show a foreign hunter's experience hunting the Gredos. I said sure, and the folks in Spain recently forwarded the product that aired. It is in Spanish with no subtitles, but the photography and production values are superb. I would ask everyone not to laugh too loudly at my dubbed voice at the end! It does give a really good idea of the terrain and style in which these hunts take place. My spouse and I combined the hunt with a vacation in Spain, and we enjoyed it so much we are going back in October of this year.

Last edited by a moderator: Feb 20, 2018
"We sleep soundly in our beds because rough men stand ready in the night to visit violence on those who would do us harm" American Novelist - W. Churchill

Sounds like another great Spanish hunting experience like so many I've heard before. Great looking animal, congrats!

Thanks for the write up and photos. Makes for a good read.
Clayton
There's just something about Walnut and Old Iron.

Congrats for your hunt and very good trophy !

That one section of trail looks like an ankle roll waiting to happen.

It is a pleasure to read about a guide chasing a bigger trophy for you. Well managed and executed.

Thanks for sharing this hunt.

Congratulations on a good trophy.

Congrats! Thanks for sharing it with us!
John 3:16

I appreciate the write up. Congrats on a fine trip.
Life is too short to hunt with an ugly gun

Thanks for the report. I will be looking them up in DSC in Jan. Great looking animal.
It'not the years, it's the mileage......(Indiana Jones)

It has to be neat to get the history/geography of "For Whom the Bell Tolls". An added plus to the trip that I would thoroughly enjoy.

Thanks for sharing your experience RL.
And here I am, returning to Africa of many faces;.... the sloe-eyed temptress with flowers in her hair who stole my youth and my heart, and left me an old man with a kaleidoscope of conflicting memories of many dashed hopes and some fulfilled dreams. E. Echols

Waidmannsheil! Awesome trophy you have there! Thank you for the write-up!

Congrats, those Spain Ibex are dreamy!

As always, it appears you had a great hunt, even though it wasn't JUST a hunting trip! You have me interested in the Gredos Mountains related to Hemingway's novel now! Something else to go on my reading list! Thanks for the report!

Thanks for the report, I think my bucket list just got a little longer.

375 Ruger Fan said:
Thanks for the report, I think my bucket list just got a little longer.
Click to expand...

Seems like there is no bottom to these buckets!!!

Wow. I'm jealous. What a great hunt and adventure

Great looking trophy. Man this hunt keeps nagging at me.....NOT GOOD!
Tommorow is promised to no one. Go live your dreams.

Red Leg, that was a great hunt. I'm conversant but not fluent in Spanish so I understood about 90% of the narration. They did you no injustices. Thanks for sharing.
You must log in or register to reply here.