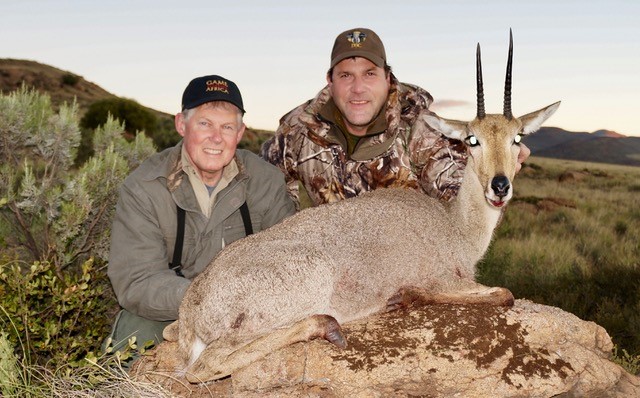 My wife, Kathy and I purchased a 7 day plains game hunt in the Eastern Cape of South Africa through one of the 2016 SCI auctions. The hunt was generously donated by Jaco and Magdel Oosthuizen of Game Trackers Africa. Although we already had plans for 2016, Jaco was kind enough to allow us to postpone the hunt until 2017. May of 2017 couldn’t get here soon enough.

The hunt itself was amazing. The terrain at the main camp was unlike any I had previously hunted in Africa. There were high open ridges and deep brushy valleys. On this ranch, I was able to take a massive blue wildebeest along with a very impressive impala ram. On the morning of day three, my PH and I took a long hike through a very long valley in search of nyala, kudu or bushbuck. After a light rain the evening before, the morning was very damp and still. Stalking conditions were perfect. Although we had many close encounters with a lot of very impressive animals, we never found the one that we were looking for. Even though we didn’t take any animals on this long hike, it was one of my most memorable days of hunting in Africa. That afternoon we left the main camp and drove a couple of hours to another camp where we were able to take a very impressive Eastern Cape kudu. Over the seven days we hunted on 5 different ranches and each was uniquely different from the previous one. We hunted vaal rhebok on a very rocky mountainous ranch and I was extremely pleased with the big ram that we were fortunate enough to take. We drove to the eastern coast within view of the Indian Ocean and were successful in taking an incredible nyala. We hunted another ranch where I was lucky enough to take a black springbok. On one of the final days, we were back at the main camp and I was able to take a much desired bushpig.

After the seven days of the hunt were over, Jaco, Kathy and I headed to Sibuya River Tent Camp. We stayed here for 3 days and thoroughly enjoyed the accommodations, game drives, meals and relaxation on the river. I even caught several fish from the river in front of the camp. From there, we travelled to Woodalls Country House and Spa where we spent two very relaxing nights. With Addo Elephant National Park only 20 minutes away, we were able to spend our last evening in South Africa taking an amazing game drive through the park. We were fortunate in that we saw elephant, cape buffalo and lion up close, along with all of the other more common plains game. It was the perfect ending to another unforgettable trip to Africa. Kathy and I would highly recommend Game Trackers Africa and we look forward to hunting with them again in the future. The PH’s, vehicles, accommodations and meals were all outstanding.
Hunting reports on AfricaHunting.com for GAME Trackers AFRICA:
- https://www.africahunting.com/threads/tanzania-three-generations-hunt-the-selous.45182/
- https://www.africahunting.com/threa...me-trackers-africa-in-the-eastern-cape.39710/
- https://www.africahunting.com/threads/tanzania-great-adventure-with-game-trackers-africa.40875/
- https://www.africahunting.com/threa...rk-continent-with-game-trackers-africa.40876/

More pictures please. Congratulations.
Tommorow is promised to no one. Go live your dreams.

Congrats to the hunters, and yes more pics please!
John 3:16

Good stuff, congrats to the hunters

+1 on this.
You must log in or register to reply here.