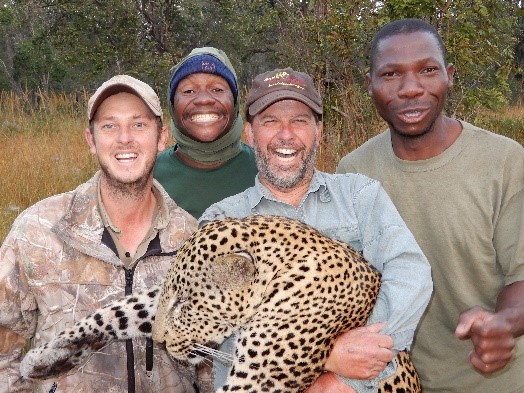 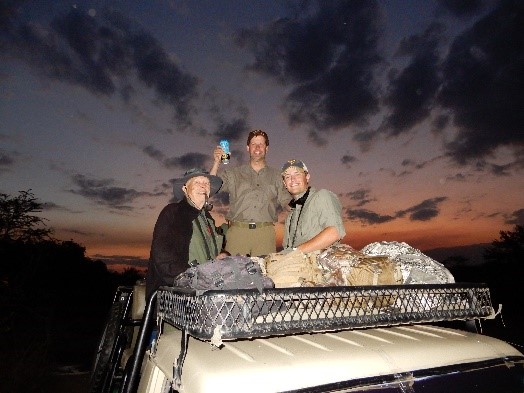 The saying “trip of a lifetime” is often used but, for the boys, Game Trackers Africa provided just that. My father, Paul and my son, Drew and I were the guests of Game Trackers hunting the great open wilderness of the Selous in Tanzania. From the moment we landed in Dar Es Salaam, Game Trackers service was first class. The Game Trackers team of PH, trackers, skinners, cooks, camp manager and staff were awesome in the way they supported and assisted us. When we arrived in camp for our 14-day Safari, it was clear that while in the bush our accommodations were first class – with spacious tents with ensuite bathroom and shower – hot water no less. The camp was directly on the Kilombero River. The view was incredible, and the serenading of the hippos and hyenas put us to sleep every night.

Our guide, JP, was on the mark from the beginning allowing the harvesting of multiple plains game, along with: hyena, crocodile, buffalo, and a beautiful leopard. The Selous is the real deal, no fences, no villages, no infrastructure. To me it was like hunting was in the 1800s. The hunt has everything you would expect – great anticipation, adrenaline rushes as we stalked the animals, and frustration as the shifting wind, and the animal’s instincts made us earn everything we took. With the expert team we had supporting us all, our targeted animals were taken, and we even got few targets of opportunities.

The Selous allowed us to hunt along the river, in the wide-open grass lands, swamps, and the forested hills providing a great variety of terrain. The ability to hunt Cape Buffalo in wide open grass lands and also the wooded hill sides was really two different and exciting experiences. The process of harvesting the animals, looking for leopard tracks, finding the perfect trees, and then waiting for the right leopard to get on bait really shows the team effort it takes to hunt leopard. And what a reward! From the picture above, you can see the many days of hard work by all involved coming forth in the smiles as we took a great leopard.

It should go without saying but I take great pride in this hunt, as I see it as an important part in keeping the Selous and other hunting areas viable. The ability to provide value to these areas allowing them to be preserved is an honor. I really hope one day when my son is a Grandfather, his son, and grandson can visit the Selous and see the diversity of game as we did.

The friends we made and experience that my dad (Babu – to the team), Drew, and I had are due to Game Trackers. Great job and thank you from the Olsens.

What a beautiful animal, thanks for sharing your story!
You must log in or register to reply here.

TANZANIA: Just Back From The Selous In Tanzania
2

N
TANZANIA: My Hunt In The Selous