Agent: Caracal (from this Forum)

PH: Brian (will find out the full name soon ) and Stuart Williams

All started when I read more and more articles about Hyena hunts in this and some other forums. Since I started hunting I was always interested in hunting a Hyena. When I did some research about it the brown hyena got more and more into the center of my attention.

After talking with Caracal I decided to do this hunt this year. During the decision which kind of package I take and how many animals to hunt, Stuart offered me to hunt some species I couldn't hunt before like Black wildebeest. So we would hunt at two different places.

About 4 or 5 before my arrival Stuart started the baiting for the Hyena in the hunting area in Limpopo. On the day of arrival Stuart collected me at the airport and we went 2.5 days hunting on a Farm in Mpumalanga for some plains game. Afterwards we changed the area and drove up into the Limpopo Provence.

The first real day of the hyena hunt we decided to sleep a little longer and had slow start into the day. After a breakfast we check the different baits and collected the memory cards from the cameras. During the lunch break we checked which animals were feeding on the bait and decided were the chance was the best. On two baits Hyenas showed up every night. At the one bait it seemed to be a single Hyena where at the other bait it seems to be a family or least it were always two Hyenas or more.

We decided to go for the single Hyena because it had a good size and always showed up around 8 pm. So after lunch we collected some fresh guts and put them to the bait where we wanted to sit.

In the afternoon we started to pack all the equipment and at 4.40 pm we sat in the blind. In various reports and from different people I heard stories how exiting it is sitting in a blind in Africa. How much interesting had been seen in a blind... However unfortunately this was not true for me. Beside a Sable, some Impala and two Duikers not much was happening. To have a sable that close was really an amazing moment but unfortunately I didn't last to long. Additional to the little action was it quite hot at this day. The temperature during the day reached 36°c and in the blind had the temperature of a Finnish sauna. 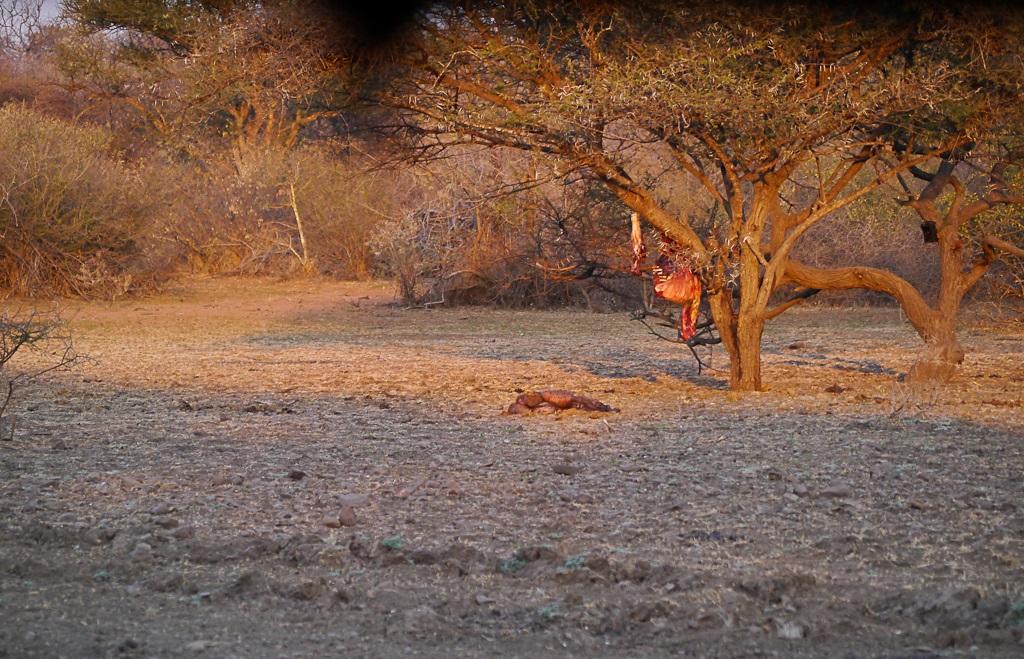 After we have set there till 10 pm my hope and motivation got less and less. At a point where I felt sure we end the hunt any minute Stuart got all of the sudden exited. From my position I couldn't see anything but I was sure that it was a brown hyena. Then I could see it on my own. It was just walking in direction of the bait until it could see the guts. All of the sudden it stopped and checked the surrounding. When it started again moving towards the bate I prepared myself. I got the rifle and positioned myself on the shooting sticks. It was just one day after full moon and I could see the hyena clearly through the scope. I gave Stuart a sign that I could take her without any torch. The hyena started to feed a little on the guts presenting us only her back. So we waited that the hyena present itself for the shot. Then the hyena started to spread the guts out and it turned. While I had it in the scope I tried to find sport for the shot. The silhouette of a brown hyena in the moonlight was something new to me. When I felt comfortable I went for the shot.

The muzzle flash of the Blaser with 300 Win Mag was so strong that the PH and myself took a minute to get back the night vision. Both of us got a good feeling when we saw it lying at the same place. When we went to check it was stone dead. Later it turned out that my bullet has broken its neck. 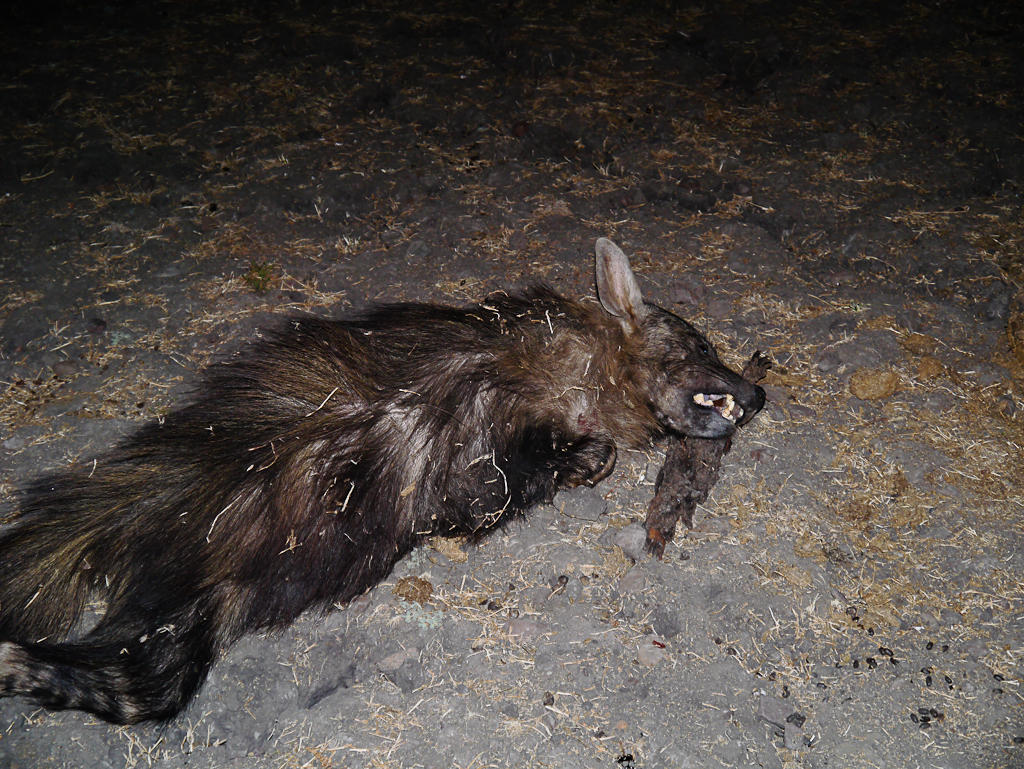 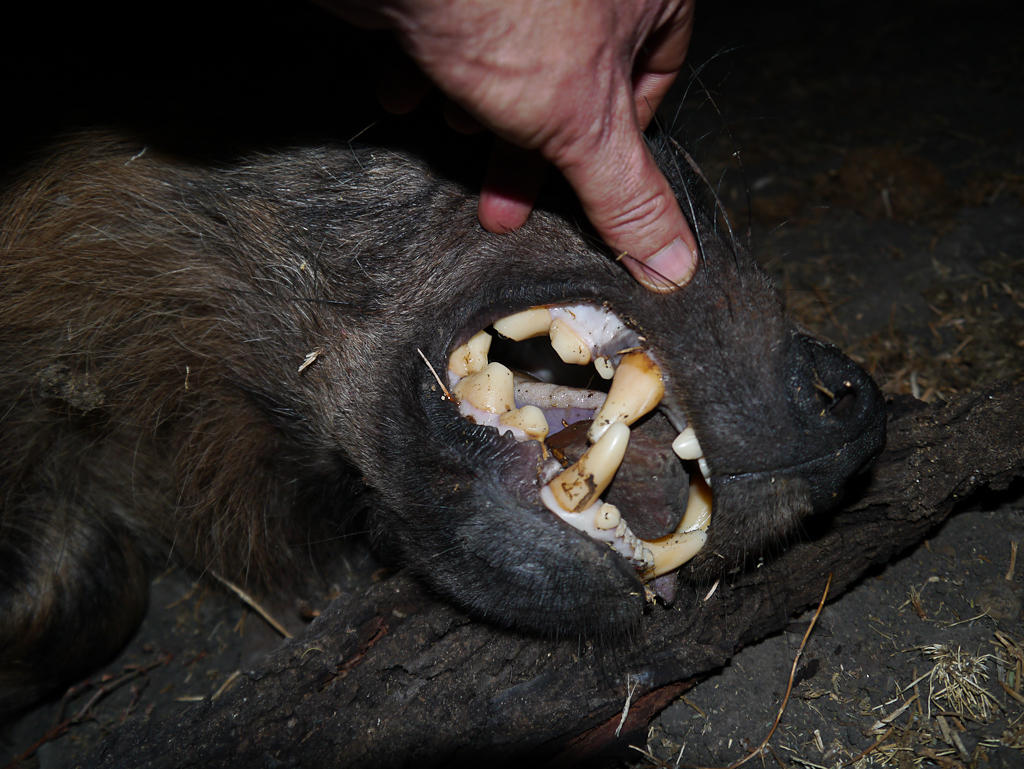 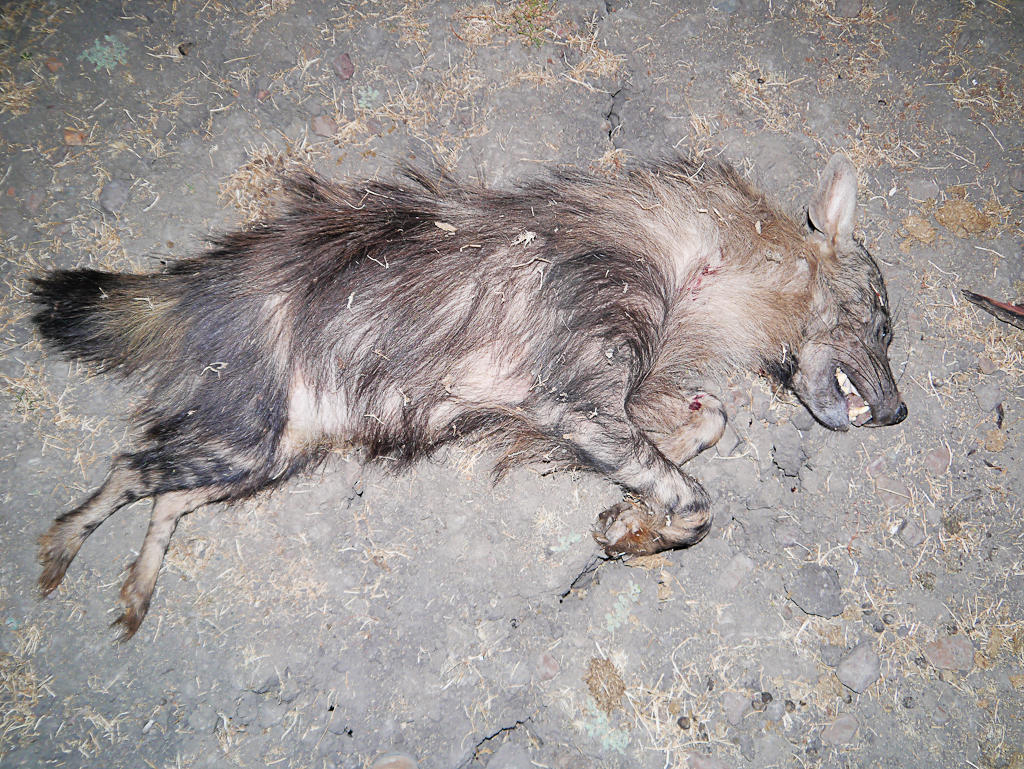 It was really an amazing hunt! Stuart Williams is really a great guy and a great PH with a good sense of humor. So I really enjoyed my complete stay with excellent food and good hunting. After the hyena we did some more plains game and a lot of beers which all were hunted down properly. Really enjoyed this hunt and I think I will remember it a long time!

Here some of the plains game trophies, enjoy. 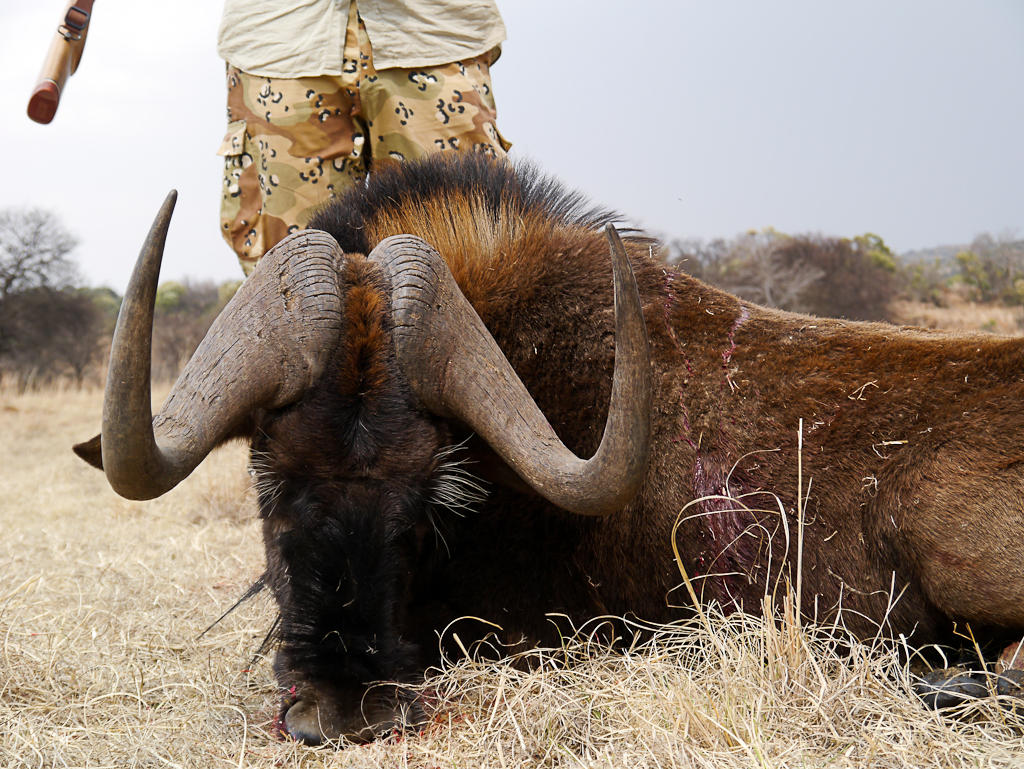 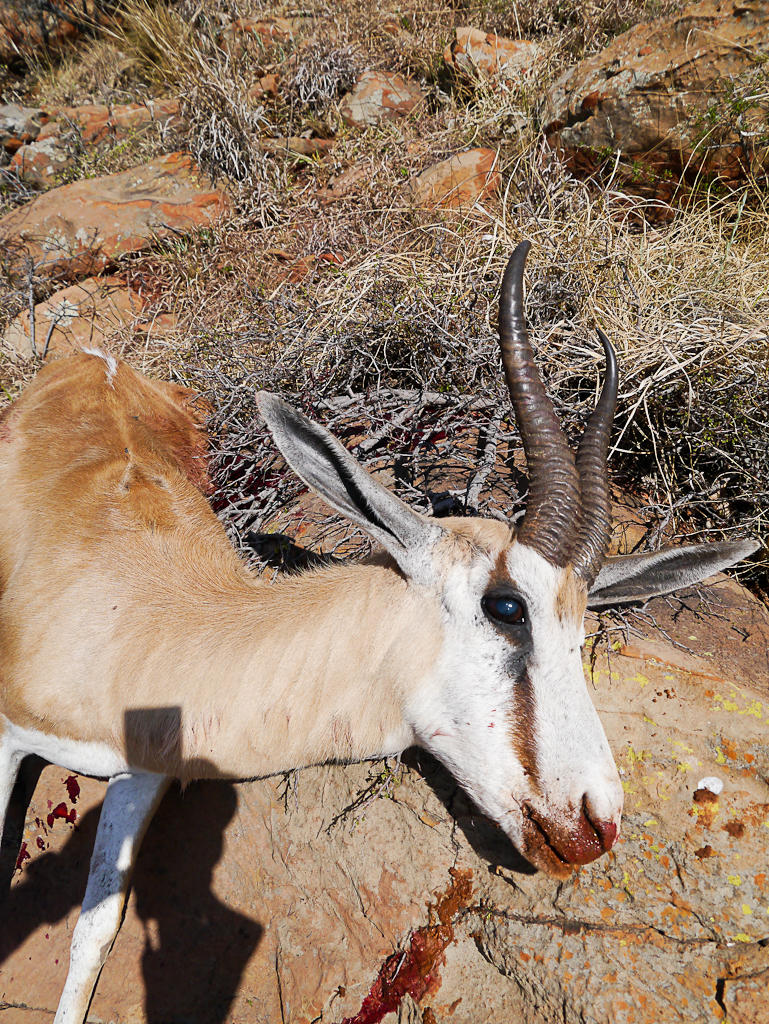 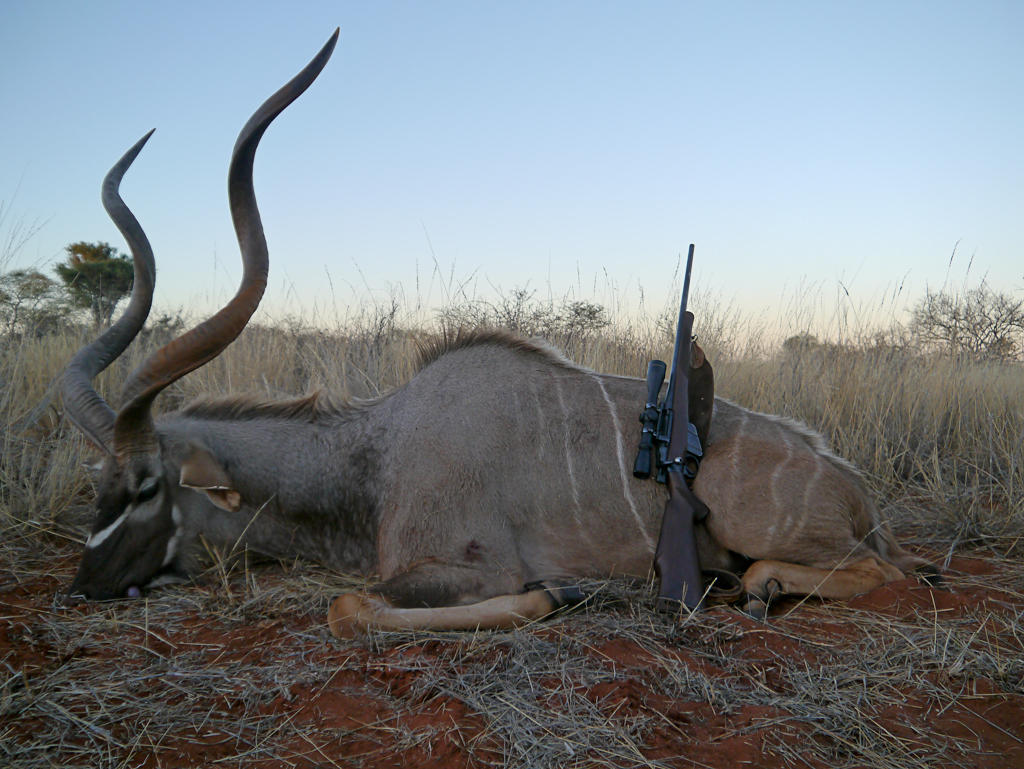 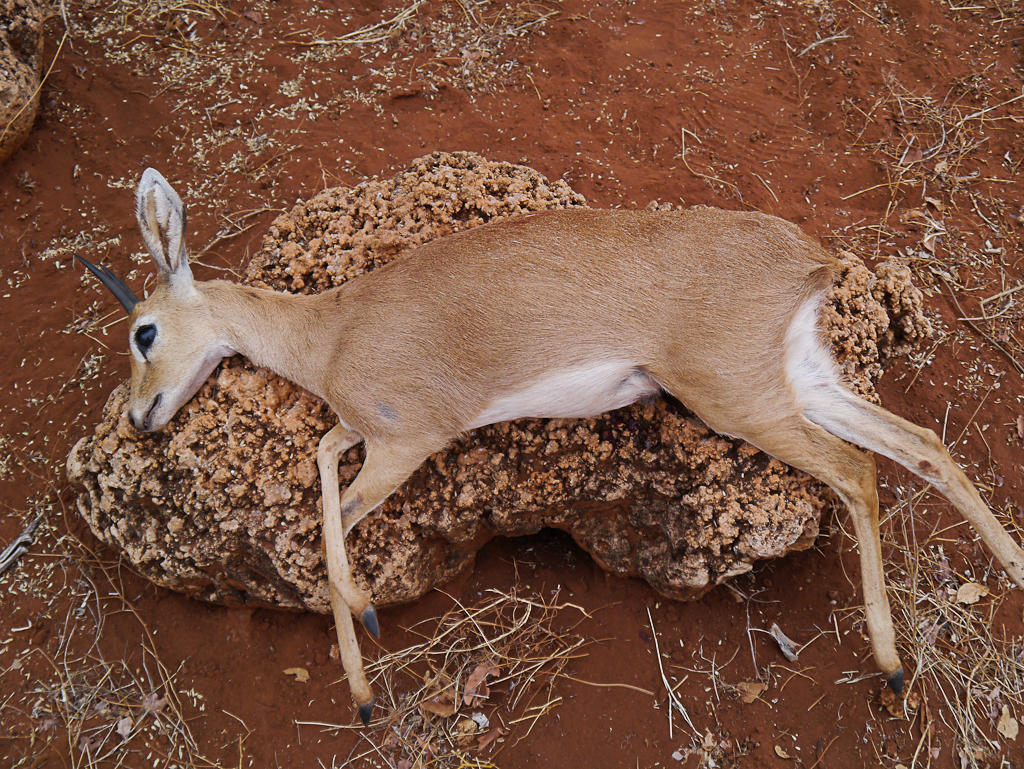 There are two types of experiences in blinds.
When sitting at a water hole and watching life walk by all day long and then the bait situation where you wait and wait and wait....
At 36C I'll bet that blind was like a Sauna.

Thanks for sharing your hunt with us.

Thanks for sharing. Sounds like all the waiting for a few minutes of sheer adrenaline was worth it. Typical when hunting from a blind or tree stand.
Facta non Verba

Great pictures, thanks for the hunt report!

Congrats, you make me jealous, a hyena is definitely on my list with a high priority. I still haven´t been able to hunt one.

Congratulations on a great trip and some fine animals
Nathan T.

Thank you for sharing. What, if any, plans do you have for taxidermy on the hyena? I've thought about brown hyena but not really sure what to do with it.

Congratulations.
Tommorow is promised to no one. Go live your dreams.

DCN said:
Thank you for sharing. What, if any, plans do you have for taxidermy on the hyena? I've thought about brown hyena but not really sure what to do with it.
Click to expand...

Please tell us more about your SMLE.

here is a pic with some other mounts in my lodge
its face on now but doesnt take up space, looks great 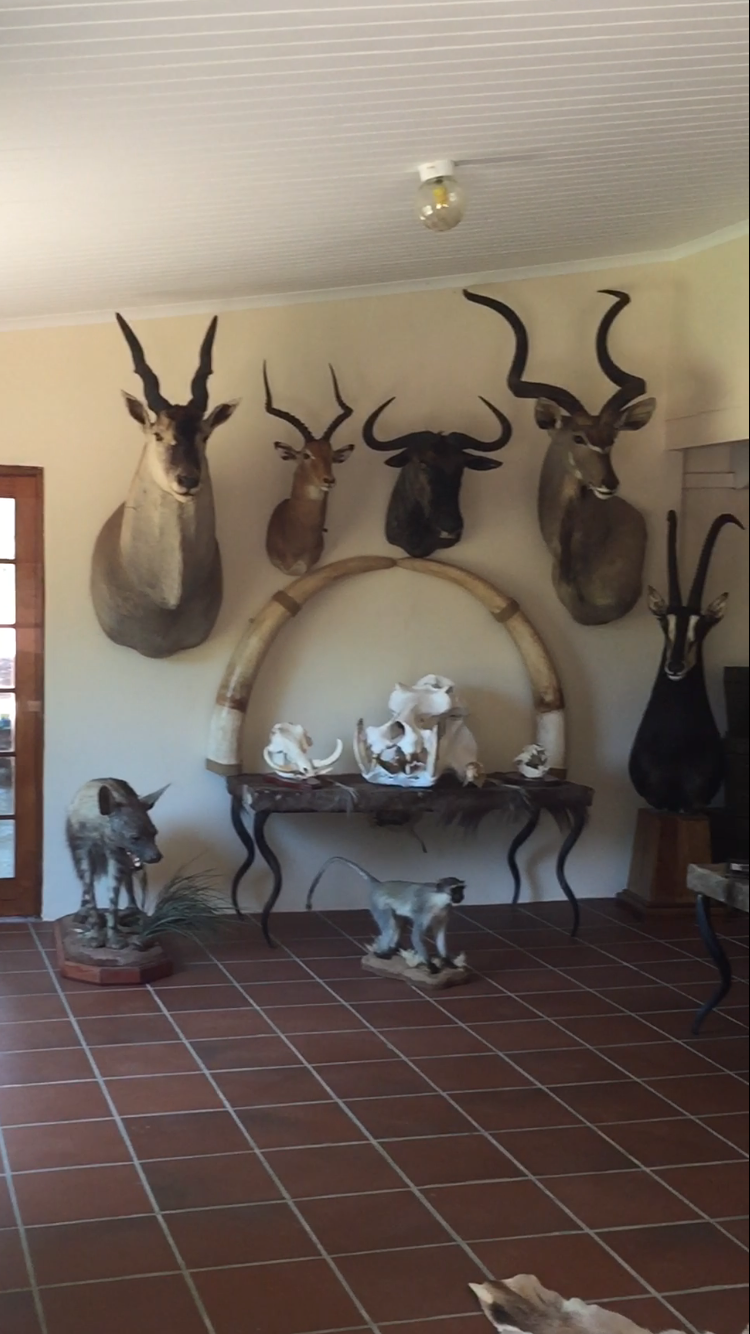