Another quick report on my recent hunts with Tally Ho (TH).

Stuart, PH and owner of TH, was able to secure a crocodile permit and we went hunting for croc on my last day of hunting. Location was on Limpopo River straddling RSA and Botswana.

The evening before the hunt, I decided I wanted to use my 26 Nosler as it was much more precise than the other barrel I brought for the Blaser R8 which was in 375 H&H. Given that the shot would likely be to the head or neck, there seemed to be no need to use the larger round. Stuart’s young PH, Rudi, talked sense into me the evening before.

The 375 was sighted for 200 yards, far beyond anything I would attempt on a crocodile. Rudi set up the shooting range very early the morning of the hunt so we could resight for 100 yards. After a few shots, the 375 was zeroed for 100 and we headed for the river.

We finally found a large croc above a pond near the river after tromping around all morning. We could not see the crocodile’s head or neck. Stuart’s longtime friend and PH Steyn recommended a shot to the spine. Steyn picked out a quarter-sized spot on the animal and instructed me to shot there and reload to shoot quickly again.

Rudi did not try to convince me to use his bushveld shooting sticks over my tripod (see my other recent posts for a comparison). Good thing as the shot had to be very precise. The first shot hit exactly where intended and anchored the animal immediately – no movement from the neck back. The R8 cycles fast and I put another 375 GMX into the same area.

We watched for 10+ minutes and there was no movement. Upon checking the animal for vital signs, the crocodile’s eyes were still reacting. I then put 4 rounds of 9 mm solids into his neck, checking the eyes after each shot. He seemed completely unfazed by the pistol rounds. We then put a third 375 round into the back of his neck, point-blank and angling down. That last shot did the trick. None of the 7 rounds exited the reptile.

The picture here is with PH Rudy, who is about 2 meters to the top of the hat he’s wearing. Croc was a little under 13 feet. 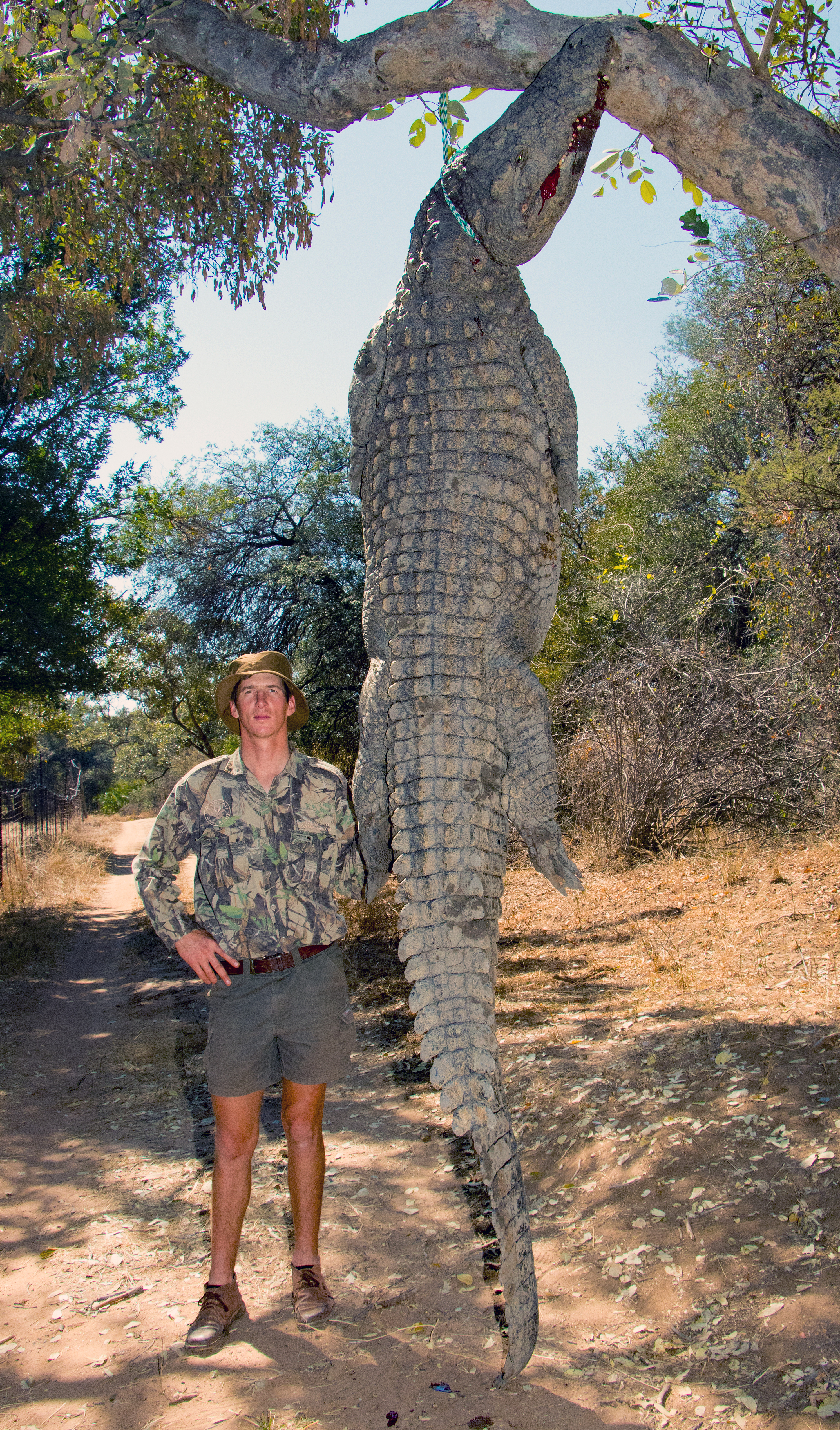 Several inches of the crocodile's tail had been bitten off. The wound was still bloody.

hi Merlin
that was interesting and great hunt on the river
those lizards are sneaky and you just never know where u will find one
there are a few shots you can place on a croc, but all require serious accuracy to anchor it
getting the chance on the croc last day ended off a great ten days of hunting

Congrats, nice croc, is that the border fence ?

I hunted a bushbuck in this area, do you recall the name of the farm ?

Man am I jealous! Great croc and thank you for sharing!
Africa on my mind.

Nyati said:
Congrats, nice croc, is that the border fence ?

I hunted a bushbuck in this area, do you recall the name of the farm ?
Click to expand...

Nyati, this property straddles the Limpopo with the hunting done in the riverbed and RSA side. I do not recall the name of the farm. The fence seen in the photo does not have a long run. We loaded the croc into a truck (not easy) and drove to this location for some photos.

We saw lots of bushbuck while looking for crcodile. There was another hunter staying on the property the day I was there (I did not see him). This hunter was hoping to take 3 bushbucks for life-sized mounting--an adult male, an adult female and a young one. The young bushbuck had been wounded I think the day before. They offered to let me shoot the wounded bushbuck for free if it could be found. Stuart and I both decided to enjoy a libation on the patio overlooking the river. Stuart's young and exuberant PH Rudi decided he would go look for the buck without a dog, without a tracker and carrying an open sight 375. The riverbed was still choked with dense, thorny vegetation. I thought the likelihood of Rudi finding, let alone shooting the buck was very remote.

Not much than an hour later, Rudi was back carrying the bushbuck. Unbelievable. 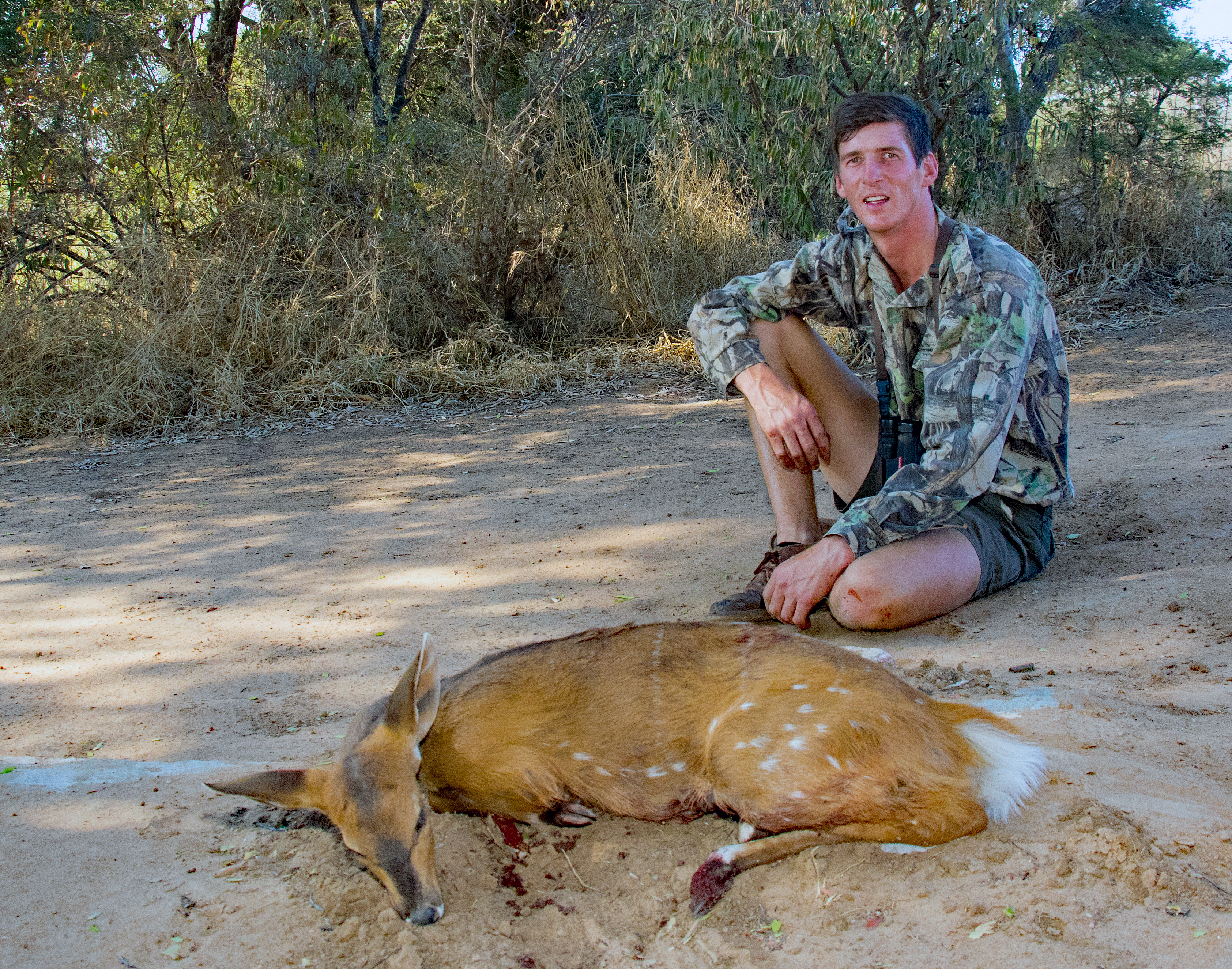 Very nice and thanks for sharing!
John 3:16

Nyati said:
Congrats, nice croc, is that the border fence ?

I hunted a bushbuck in this area, do you recall the name of the farm ?
Click to expand...

yes it is the border fence (set back from river)
this is on a concession i use for bushbuck and crocs
cant recall the exact name of farm, the guy that runs the concession is Steyn Potgieter whom ive known and been good friends with for 10+ years
closest town to here would be swartwater

yes it is the border fence (set back from river)
this is on a concession i use for bushbuck and crocs
cant recall the exact name of farm, the guy that runs the concession is Steyn Potgieter whom ive known and been good friends with for 10+ years
closest town to here would be swartwater

Then I´ve hunted south of this area, one farm was Serengeti, the other I cannot remember, but was next to the Stockpoort Border Control.

That was in August of 2013, not much water in the river, you could cross to Botswana just by walking, we did manage to see two small crocs.

Here is a pic of bushbuck from this area 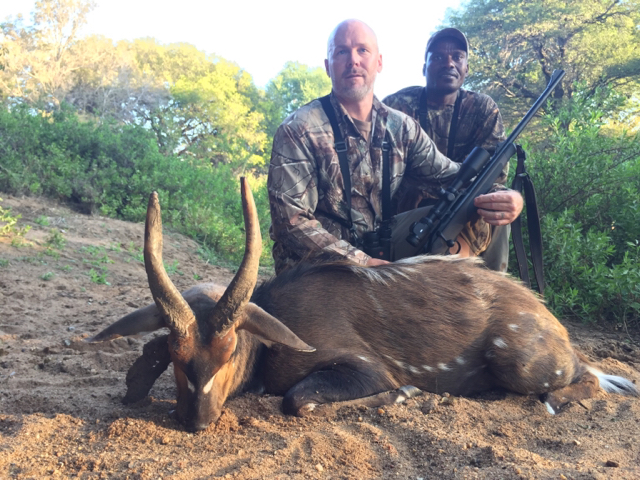 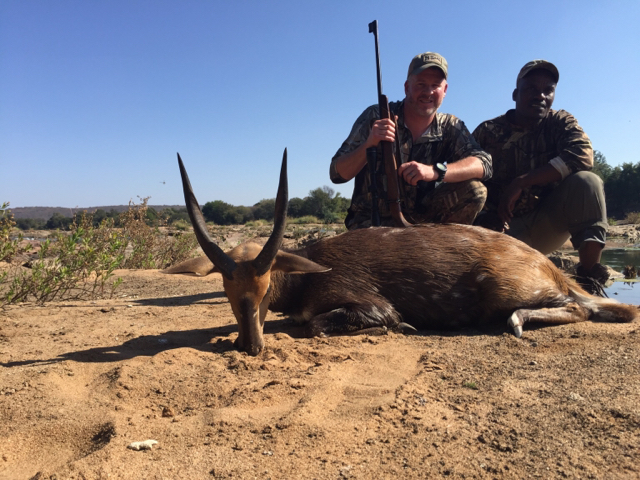