May 9, 2015
I just arrived back from a hunting trip in Grahamstown South Africa with a company called KMG Hunting Safaris. I first heard of them when I went to the Toronto Sportsman Show, where I spoke to Marius (owner of KMG). Even though I got a good vibe from our meeting I wanted to research this company online before I invested my money into them. Their website looked reputable but I prefer to read reviews from a third party website other than the company’s own web page (I feel that they can pick and choose which reviews go on their web page). I was not able to find any reviews on this company other than their own website. I was left with a hard decision but decided to go with them for 2 main reasons; I received a good vibe from Marius on our meeting in Toronto, and they were the cheapest company out of all the ones I looked into. I did promise myself that I would write a review on this company (good or bad) after my trip was complete for anybody that is interested in planning a hunting trip to South Africa.

I was greeted by my hunting guide Warren, when I arrived at the airport in Port Elizabeth. From there it was approximately a 2.5 hour drive to Grahamstown. The hunting Lodge is a 5 star quality with a beautiful scenic view of hills and valleys without a house in sight. You can see all kinds of wild life from the deck because the lodge is located on a games reserve. Before Diner I had the chance to take a couple of shots with the guide’s rifle so that I would be comfortable for the coming hunt. I had Marius set up a day jeep safari for the next day, where we saw lions, elephant, hippos, giraffes, etc. This was a nice relaxing day to get over some of the jet leg before the hunt.

The first animal I hunted was the Fallow Deer. I was told that these animals are generally tricky to hunt but in April they are in the rut, which made things a lot easier. We started the hunt at 7:00am and had my Fallow Deer by 2:00pm. Within the next 3 days I had shot an Impala, Kudu, and Warthog. It rained quite a bit the first 2 days but did not affect the productivity of the hunt. My guide Warren was very knowledgeable and professional. He was able to get me within 200 yards for every animal because I told him that I was not comfortable with long range shooting. I felt he was always looking out for my best interest and communicated his opinion very clearly when I asked but was never pushy.

All the meals were amazing (in my opinion South Africa has the best food out of all the places I have visited around the world), staff are extremely friendly and accommodating.

I learned a lot on truths and myths with managing animals in this Country. One thing that impressed me was how Warren and other hunters are big advocates with conservation of all animal so that everybody can enjoy them. He explained how money generated through hunting helps fund and protect animals against poaching to sustain a balanced population (poaching is a big problem in South Africa and not legal hunting). From what I can see South Africa has an excellent program in place for legal hunting. I also appreciated how nothing goes to waste with the animal that was hunted. From skin to the guts, Everything gets used.

I did a 4 day hunt for 4 animals and could have easily stayed longer if time had allowed me. Instead, I rented a car and drove to Cape Town, making stops along the way (I would recommend doing this road trip). We walked cheetahs and elephants, went to a monkey and snake sanctuary, Zip lining, Cango Caves, cage diving with great white sharks, see penguin colonies, and Table mountain to name a few of the things we did on our way to Cape Town.

Overall, hunting with KMG was the highlight of my trip and exceeded all my expectations. I highly recommend KMG hunting Safari for anyone interested in hunting in South Africa. I have attached a few pictures of animals I got 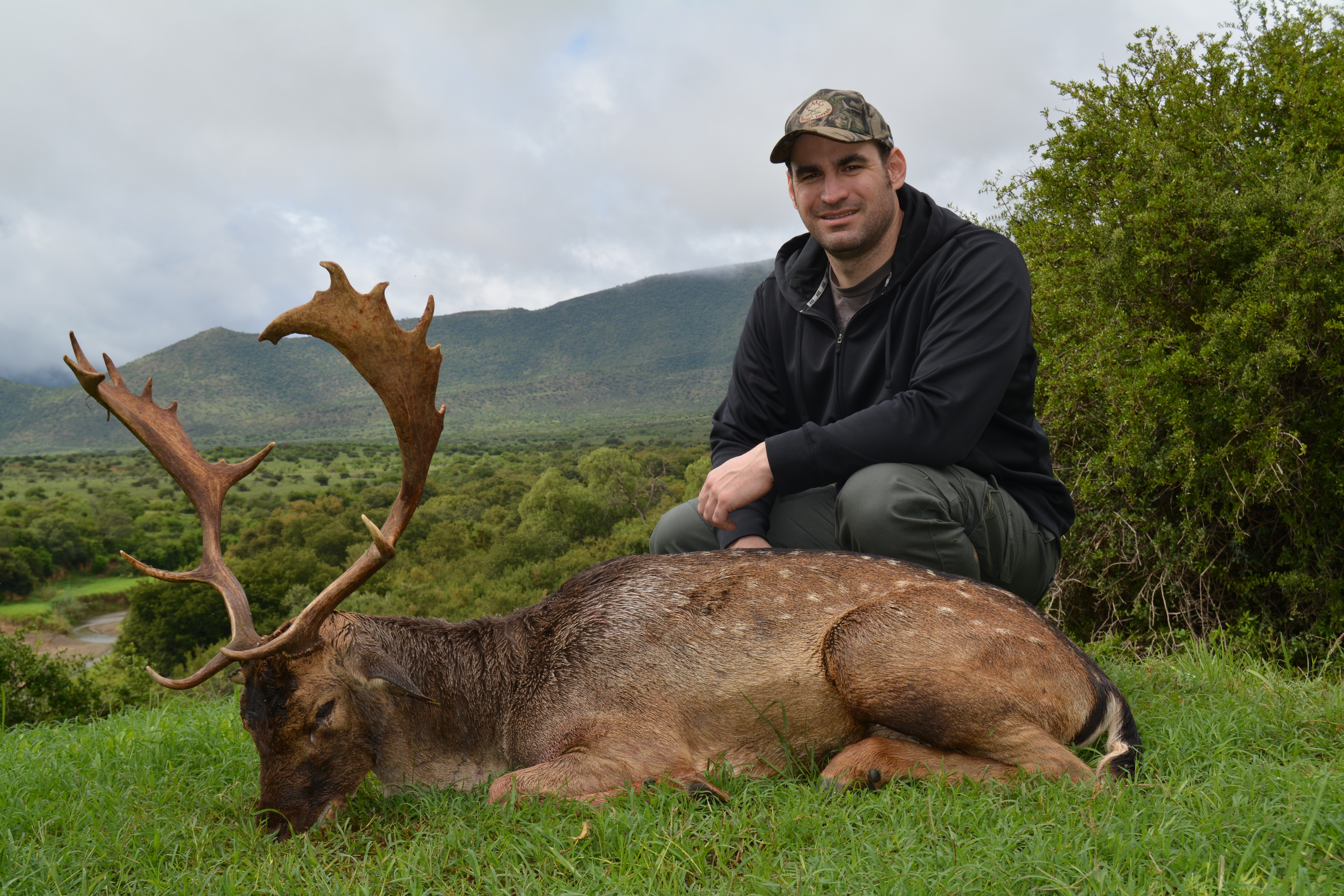 Congratulations sounds like you had a great hunt. That Kudu looks like a stud. Way to go
Life is not a journey to the grave with the intention of arriving safely in a well preserved body, but rather to skid in broadside, thoroughly used up, totally worn out, and loudly proclaiming, “Wow what a ride!“

Welcome to the site Conan!

Sounds like you had a great hunt and well rounded trip to RSA. Great palms on that fallow deer, especially for South Africa and the East Cape.

I had the good fortune of seeing a very enthusiastic guy in a KMG shirt excitedly explaining the upcoming hunt to a client at the airport when we were waiting for our flight to Phalaborwa to start our safari with Spear. I waited to introduce myself and it was Marius.... He and a client where on their way to Zimbabwe to hunt Hyena. Marius is one of those guys who is obviously excited and passionate about what he does! It was great meeting him.

Congratulations on your hunt. Thanks for sharing your experience.

welcome to AH
great entry ,conan
and as always another gold star ,for KMG,and marius.
you took all great animals
thanks for sharing your memories ,with all of us
THE HUNTER; The person that pays over 90% of the cost for the presavation and maintance of wildlife and gets zero credit for it ................

Damn Marius, it appears that you made one Canadian very happy.

Congrats on your hunt Conan7.

Certainly sounds like you made the most of your trip into the Cape.

Sounds like you had a very good hunt. Congrats and hope you return to Africa for a second hunt.

Glad you had a great time. Marius from all my conversations seems like a terrific guy.
Tommorow is promised to no one. Go live your dreams.

Marius is wonderful and I am so glad to hear the Toronto show has generated some clients for him!

Welcome to AH Conan7, and congrats on your first Afican hunt !
J

Sounds like you had a great hunt Conan. And you added a whole lot of adventures into your scenic safari!

It sounds like you'll be going back. Thanks for posting and congratulations.

Welcome to AH Conan! You went on a "trip of a lifetime", but I bet you're already trying to figure out how to get back!! Thanks for sharing. Kevin

Thanks for the report. Sounds like you really put together a great trip.
"When my friends tell me that I have led a remarkable life, I have to admit having done my best to make it so" - John Kingsley-Heath

Welcome to AH Conan and thanks for sharing your trip report. Glad to see you had a good time with Marius and KMG!

Good to hear you had a great time. I have a trip planned with Marius for next April and your Fallow looks mighty tempting. May have to add one to the bag.
Y'all can go to hell, I'm going to Texas! Davy Crockett
C

Sand Rat said:
Good to hear you had a great time. I have a trip planned with Marius for next April and your Fallow looks mighty tempting. May have to add one to the bag.
Click to expand...


You won't regret it if you do decide to hunt this animal. It is a fun time of your to go for them. Good luck with your up coming trip!
C


Thanks. To me the Kudu is such an impressive animal. They are hard to sneak up on for such a big animal.
C

Sounds like you had a great hunt and well rounded trip to RSA. Great palms on that fallow deer, especially for South Africa and the East Cape.

I had the good fortune of seeing a very enthusiastic guy in a KMG shirt excitedly explaining the upcoming hunt to a client at the airport when we were waiting for our flight to Phalaborwa to start our safari with Spear. I waited to introduce myself and it was Marius.... He and a client where on their way to Zimbabwe to hunt Hyena. Marius is one of those guys who is obviously excited and passionate about what he does! It was great meeting him.
Click to expand...


You pretty much describe him to a tee. I find that he is passionate person in anything he does. He has a good energy that a lot of people don't have about life. He is a fun and interesting guy to talk to for sure.
C

woods1126 said:
Welcome to AH Conan! You went on a "trip of a lifetime", but I bet you're already trying to figure out how to get back!! Thanks for sharing. Kevin
Click to expand...


It was definitely a trip of a life time that I will never forget. If I could have figure out a way I would still be there..lol. I would definitely go back in a heartbeat....I will need some time to save up though
You must log in or register to reply here.