I am very impressed with the wood on this rifle. Hope it shoots well and that your days in Africa with it are the makings of great hunt reports.

I've only done business with Wayne once, which was on the M70 .300RUM to .404J he did for me late last year. I bought the rifle from a Cabelas in Georgia and had it shipped directly to Wayne. He had the work done in very short order. It was ready to go in late December or early January and I was ready to send him a check. He mentioned going to SCI. He was going to be driving down and I would be driving up. So instead he was agreeable to bringing the rifle with him which made me feel better to not risk having it busted up by UPS.

The whole experience was just easy and pleasant. I would not hesitate in the least to do business with Wayne again.

That's a nice piece of wood.

What a great looking rifle. Too good to take into scrub. Yet might get scratched. You need another for actual hunting

Dr Ray said:
What a great looking rifle. Too good to take into scrub. Yet might get scratched. You need another for actual hunting

Regardless of the quality of the wood, all of my rifles are first and foremost hunting rifles, and thus meant to be used. While in the field, I try and take care of them the best I can, but they all have scratches, dents, and dings. I've heard them referred to as "character marks", and I guess they are in a sense, as they tell a story and demonstrate that the rifle was used.....

One day, I'm sure a few of my African rifle's stocks will need to be refinished, but in my mind it will be well worth the trouble and expense as the rifles will have been with me through some fantastic adventures.........at least I hope that's the case.
"I call it the law of the instrument, and it may be formulated as follows: Give a small boy a hammer, and he will find that everything he encounters needs pounding." - Abraham Kaplan, The Conduct of Inquiry: Methodology for Behavioral Science (1964)

Congrats on a beautiful rifle!

Congrats on your beautiful rifle. Very nice, excellent choice on the Northfork's. I also picked up a very nice AHR custom that a gentleman wasn't using and decided to sell. Wayne must have a good stash of pretty nice English, my 375 that he upgraded had nice wood also.

Beautiful Wood,congratulations
Be Yourself Everyone Else Is Taken

Good looking rifle/wood. I bet it will shoot quite well. Congrtas. Bruce

A rifle anyone would want to take into the field for sure. Gorgeous work.

It's a premium gun! Honestly I'd rather have a few excellent guns now.......than the 40 in my closet.

As I did with my AHR 9.3x62 (Mauser), I've finally gotten around to getting serious about finding a load that works in my AHR DGR (CZ 550 Magnum) in 404 Jeffery. As this isn't a very common loading, and many of the standard manuals don't have load data for this cartridge, it took me a little while to settle on a powder that I thought would be suitable. My intention was to shoot North Fork's SS and CPS in 400 grain weight out of this rifle. I reached out to the technicians at North Fork and they were very helpful. There recommendation for this weight was to go with Hodgdon H4831SC as they had gotten good results from it in their test facilities. The cases I planned to use were made by Norma. While Norma brass is top notch, it still requires some prep work to get it to what I consider to be uniform. So....after FL resizing the brass, uniforming the primer pocket and flash hole, and chamfering the inside and outside of the case mouth, I utilized the Dan Newberry Optimal Charge Weight method (as I do on all my hunting rifles) to test escalating charge weights of Hodgdon H4831SC until I hopefully obtained the velocity and accuracy I wanted. And after a session behind the rifle at the range, I was very disappointed in that powder choice. The best I could muster with a max load of powder, was 2279 fps and accuracy that was well over an inch despite the charge weight. Wayne's rifles had always shot well for me, so I knew that I could do better. I felt like I needed a powder that was just a tad faster in burn rate than H4831SC, and I considered H4350, RL 17, and IMR 4831, as all of these had been used fairly successfully when loading 400 grain bullets in the 404 Jeffery.

After reading some different forums, I found a hunter/shooter who swore by IMR 4831 in the 404 Jeffery, and was easily getting 2400 fps. IMR 4831 falls a little ahead of H4831SC in burn rate, and that's what I felt like I needed in this rifle. I touched base again with North Fork, and Franz at North Fork said they'd had experience with IMR 4831 in the 404 Jeffery, and recommended a max load of 91.0 grains, as it would be moderately compressed. The fellow I referenced had gone as high as 95 grains of IMR 4831, but in hindsight, I have no idea how because the most I felt comfortable loading into the case was 92 grains, and it was hard to get the bullet to seat to my starting depth of 3.60 inches. As such, I decided my OCW "ladder" would range in weight between 86.5 and 92.0 grains of IMR 4831. I am happy to report that after going through the process again, I have settled on IMR 4831 as a great powder for the 404 Jeffery, at least in my rifle. I went all the way to 92.0 grains and I never witnessed any of the traditional pressure signs one can see with hot loads. When I returned home, I measured the case head diameters of my hottest loads with my Vernier calipers and the case head diameter stayed at, or slightly below, the max diameter of 0.545 inches. With 92.0 grains of IMR 4831, I was able to obtain an average velocity of 2445 fps, and actually the second best accuracy of all the charge weights I shot. The load I finally settled on was as follows:

The results I obtained from the above load at 100 yds were as follows:


A picture of the 4 inch target: 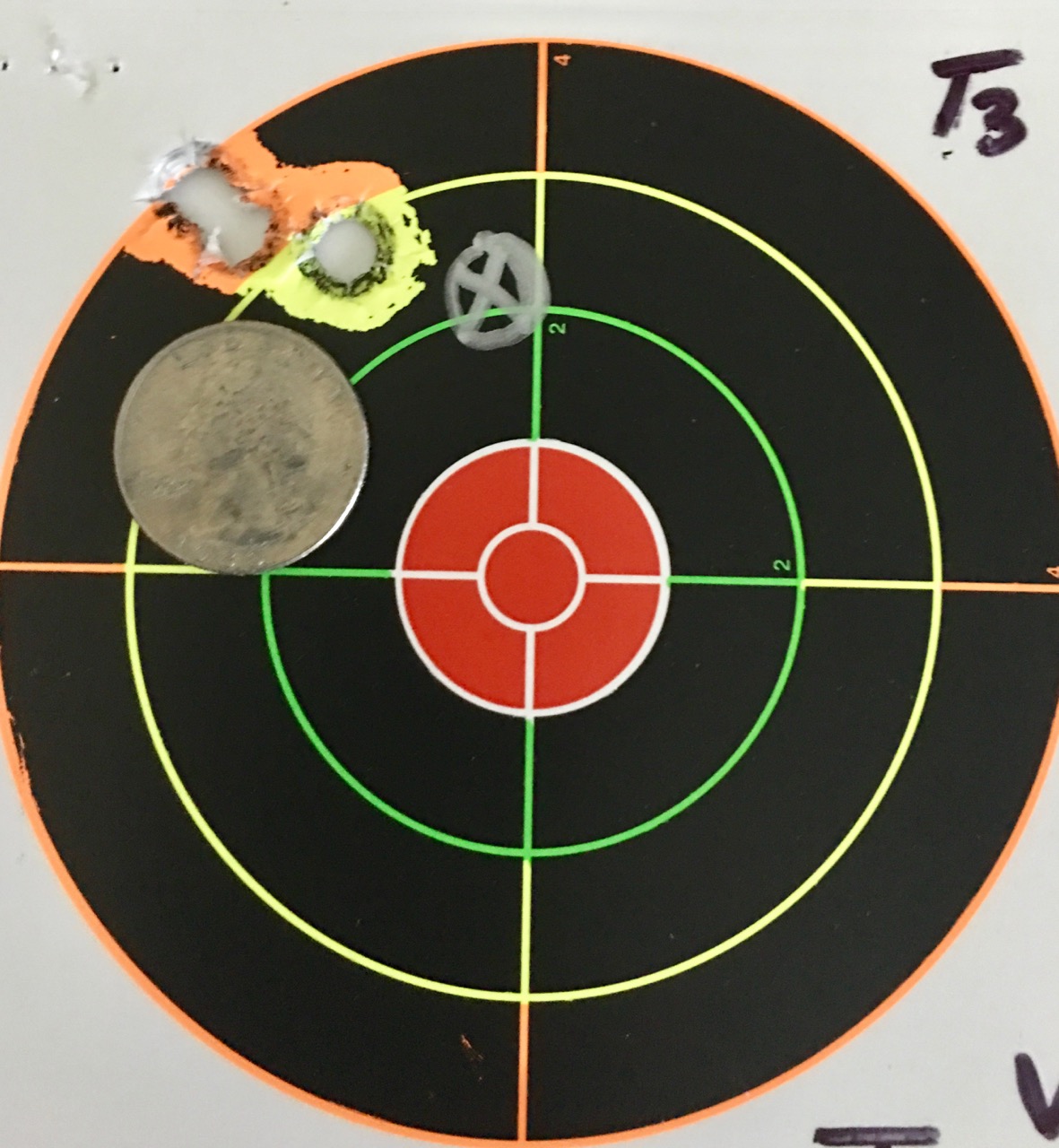 My next goal is to come up with a load for the North Fork 0.423 (400 grain) Cup-Point Solids that have the same POI (or as close as possible) to the North Fork Bonded SS's. The technicians at North Fork recommended starting at approximately 1 - 2 grains less powder than the softs, as the bullets are longer, and build pressure behind them a little quicker than the softs. I'll post those results when I shoot the CPS and settle on a load.

This rifle is such a pleasure to shoot. As I've said before, Wayne builds some great rifles.....

The usual disclaimer....what works in my rifle may not work, or be safe, in yours so be careful and work up from a starting load of 5-10% less powder than my final load if you choose to go with IMR 4831 in your 404 Jeffery.
"I call it the law of the instrument, and it may be formulated as follows: Give a small boy a hammer, and he will find that everything he encounters needs pounding." - Abraham Kaplan, The Conduct of Inquiry: Methodology for Behavioral Science (1964)

Von Gruff gave me the most accurate load got with his Jeffery. Just in case you are interested it is 84 Gr. of H4350 with a 400 Gr Woodleigh. I used his load but with a 400 Gr Swift A frame. At the time I did not have a scope on the rifle but I was very pleased with the group I got using iron sights and a sand bag to steady my hand.

Im not sure where I got this data from but you might be able to use some of this data.. Hope it helps..

neckdeep said:
I also picked up a very nice AHR custom that a gentleman wasn't using and decided to sell.
Click to expand...