Most of you have seen the end result of this hunt but I will start at the beginning when I met Cody with Lobo Peak outfitters out of Prince George at DSC last January.

After meeting Cody I booked a hunt for this fall for moose with an option for black bear.
The hunt began October 18 for an 8 day hunt, and I was met at Prince George airport for the short 2 hr drive to camp.
Camp is nice enough with plywood cabins with bunks and wood stoves, and a main log cabin lodge with other assorted buildings. There were 4 other hunters in camp that had driven up from Washington state hunting 2x1

Day one was mostly spent driving logging roads, looking for tracks and glassing the logging cuts. We saw several cows and calves and a couple of black bears but they were either sows with cubs or small/young bears.
One of the other hunters shot a nice moose so we went to help load out.

Days 2, 3 are very similar except day 3 we floated a small river in a boat with electric motor in the evening, It was fun to slip quietly back down to camp at dusk coming sometimes within 15 yds of moose but they were all young or cows. 2 more hunters shot their moose as well so we went to load them up as well.

Day 4 seemed different as a lot of you know, some days you just wake up and feel this is going to be a great day, full of optimism and expectation. As it turned out, about mid-morning we came around a bend in the road and the guide said, "there's a big moose cow over there" and just then all I could see was a big bull moose from my angle. I went from 0 to 60 in a heartbeat and the time from spotting the moose to loading my gun to firing was no more than 10 seconds. The shot seemed true (offhand at 110 yds) but the moose turned and began slowly moving away, so I put a second Barnes 18o grn raking in from behind the last rib to exiting the offside shoulder, and he dropped instantly. The first shot took out the top of the heart and shoulder, but if an animal is still standing I an still shooting. 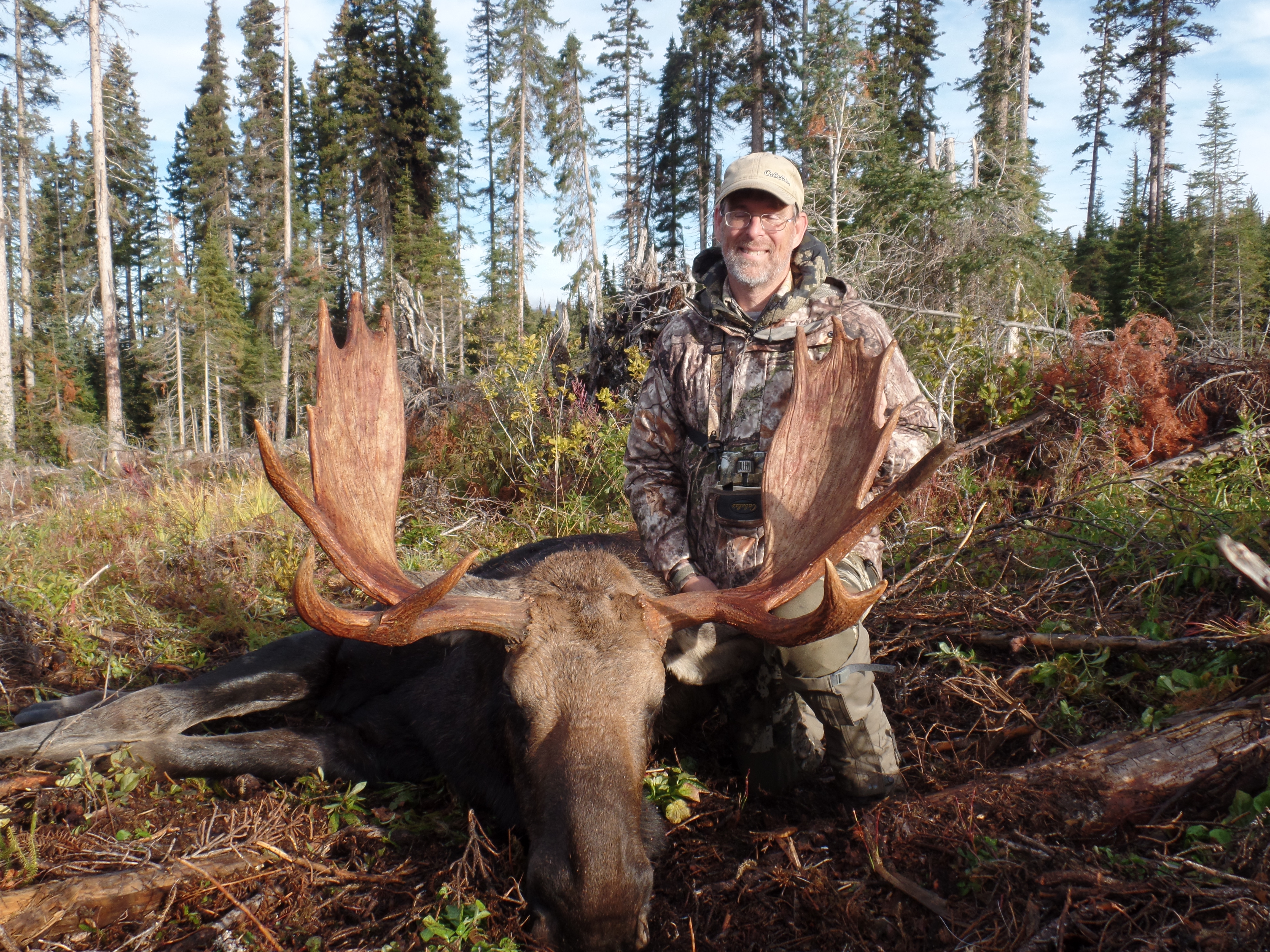 The guides estimated he was an old moose in decline at about 12 yrs old. Body size was large for a Canadian species, and larger than the other ones shot that week. We finished pictures, and field dressed it to cool and returned to camp to get help loading/dragging it out.
It'not the years, it's the mileage......(Indiana Jones)

Congrats on some good shooting and a good trophy.

We returned with help to get the moose out of the slash/brush and found an unpleasant surprise waiting for us.

2 grizzly bears have claimed the moose and one is covering it up with sticks and dirt right in front of us. It appears it is a sow and 3 yr old nearly grown. Since there are 3 of us with guns and a total of 8 people, we each take turns firing a shot or 2 into the air, and reloading and advancing towards the bears. The bears stand, look, and pop their jaws. Eventually I put 2 rounds into the dirt about 3 yards in front of the bears and they retreat to the edge of the timber about 50 yards away.

This is why I asked if grizzly bears can count. I am sure if it was just the 2 of us we would not have held the meat. I found out later a miner on the neighboring property was lost with search and rescue out looking for him the same day. The only parts found were the straps from his pack. Not even his boots were recovered.
The three of us stand guard while the others load out the moose. Spent the better part of the afternoon washing the dirt and sticks out of the body cavity. No meat lost!
Pictures are not loading so I will add them later.
It'not the years, it's the mileage......(Indiana Jones) 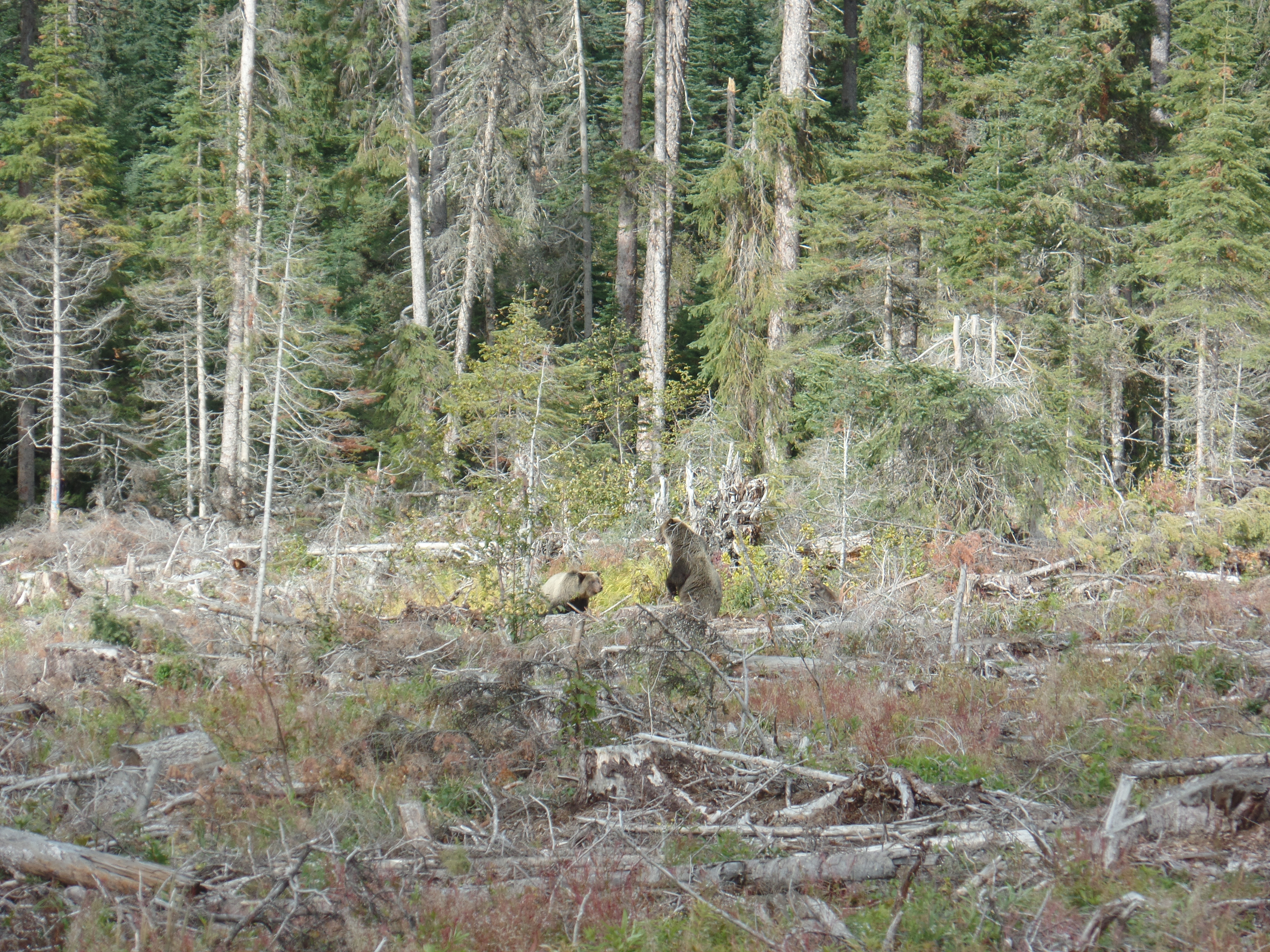 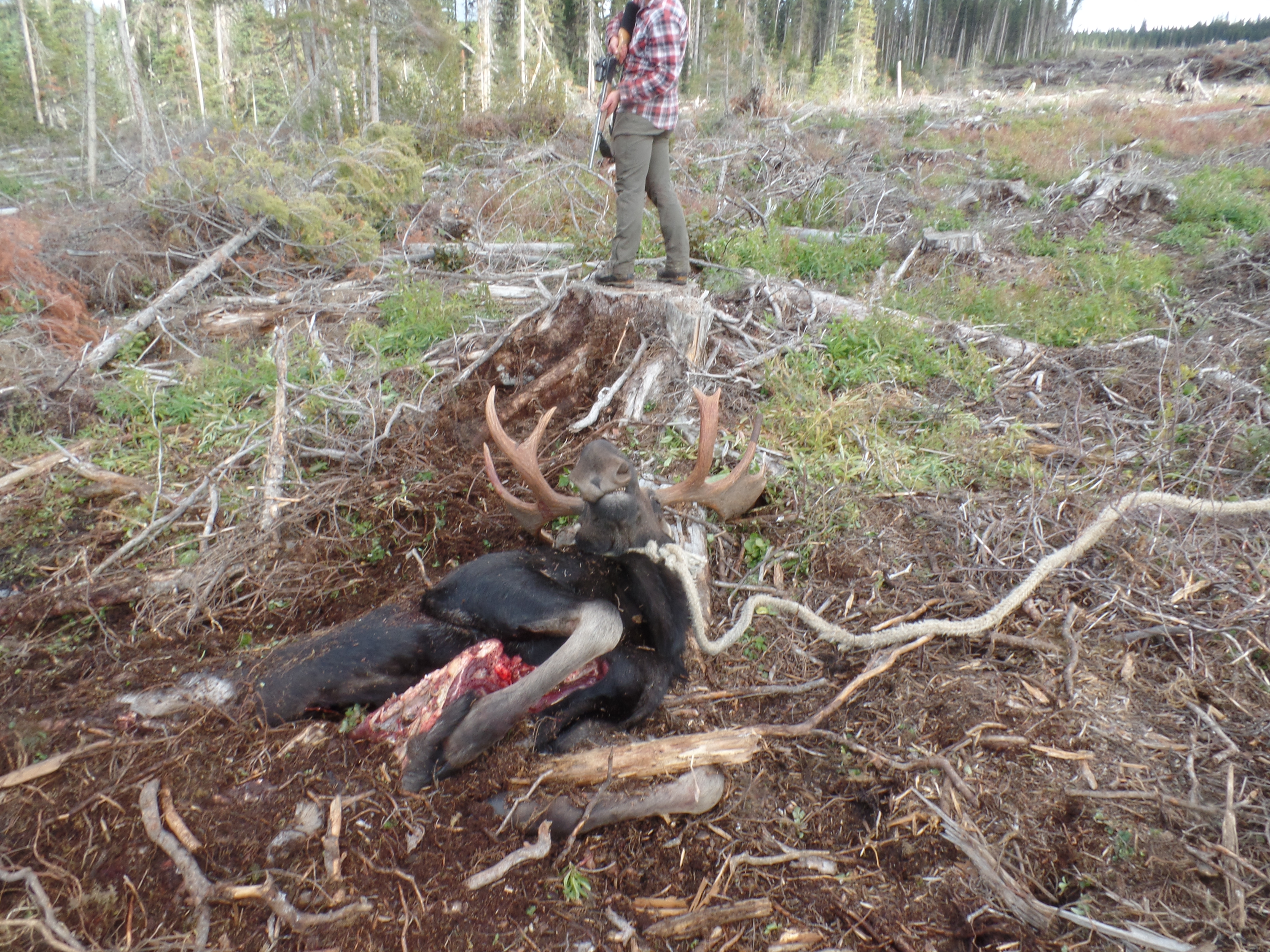 Nice moose and a pretty cool story you'll be able to tell for a long time! Congrats!!

Nothing like hunting in Grizzly country!
It does not surprise me that you had to shoot that close to the bears to get them to move off.
Glad you had enough muscle to claim it back. That is pretty fortunate.
Thankfully the Moose was in the open, that would not have been fun in the trees.

Congrats on the moose and wow what an encounter!
John 3:16

Congrats, that was quite an adventure !

Congratulations on a fine old moose! A grand adventure!
Africa on my mind.

Now that is an adventure. Nice moose. Congrats
Bruce

Congrats on the moose.

That's the kind of stuff a Winchester or Remington calendar is made of!

Very cool that you actually got to live it!
Captain of the Luddite Society
https://www.africahunting.com/threads/zimbabwe-hunting-the-bvc-in-zimbabwe-for-buffalo-john-sharp-safaris-exceeding-expectations.53046/

Gotta love it—I was about to ask why u didn’t clobber the bigger bear? Then it hit me BC ( before common sense). Another couple of years those bears will be a lotta fun

Congratulations on the moose! The experience with the grizzlies, priceless.
And here I am, returning to Africa of many faces;.... the sloe-eyed temptress with flowers in her hair who stole my youth and my heart, and left me an old man with a kaleidoscope of conflicting memories of many dashed hopes and some fulfilled dreams. E. Echols

Thanks for the kind words and encouragement. The way I remember the incident was more of them being a pain in the a## and how much meat was going to be lost. Then later I was glad they didn't show up while we were field dressing the moose. During the time they were there I was ready to go all Mark Sullivan on them hoping one would charge. Lots if different emotions. It was only an hour and a half from when we left to when we got back. Looking back I think this was probably the best outcome possible, with no meat loss and no game violation issues. The 4 quarters weighed 740 lbs at the processors 2 days after hanging.
It'not the years, it's the mileage......(Indiana Jones)

When I lived in Fort Nelson a shoot was a dinner bell for Grizzlies, if you left them they would be on them in an hour. We would leave a piece of clothing on the moose, it seemed to help.

Congrats on a fantastic moose! Glad those bears weren't more of a problem. They're no joke. In 2001 my cousin's father-in-law was hiking in the bush outside of Prince George. He bumped into a grizzly on a moose kill and the bear attacked. Sadly he didn't survive the encounter.
"I don't need to shoot farther...I need to hunt closer." - G. Sitton
You must log in or register to reply here.