See previous post. Not sure why the quote disappeared.

Saw it.
Liked it.
“They that can give up essential liberty to obtain a little temporary safety deserve neither liberty nor safety.” Benjamin Franklin 1759

2L8 said:
I may have a opportunity to go on a 5-Day with Kuche in Limpopo for Blemsbok, Impala and Warthog in 2019. I noticed they recommend 7mm and up for mininums.

I have a 6.5 Creedmoor (pretty much a ballistic twin to full pressure 6.5x55 loads) that I shoot really well with 129 Hornady Interlocks @ 2800 fps. They have been very effective on Whitetail and Feral Hogs to 200 lb (Haven't shot anything larger), They exit on shoulder shots on the hogs. I have not taken any Texas Heart Shots.

I don't really have anything between 6.5 CR and .338 Win Mag right now. .338 seems a little excessive (A 200 Grain Winchester Soft Point will pretty much decapitate a deer on a neck shot) and while an excuse to buy a new rifle is nice I've sold my .277-323 rifles for the most part because they didn't do anything I couldn't do better with a 6.5 or .338 WM.

Has anyone hunted with less than 7mm with Kuche and did you have any issues?

Do you think the 6.5 CR is to light for Warthog?
Click to expand...

Just spent 10 days in late Aug with them. I would ask, but we shot everything that we gun hunted with one of their rifles which was a .308. As long as you know your cartridge and it's limitations (aka don't take ridiculous shots) you should be fine.
2

It appears that as of 2009 any animal larger than Springbok had a minimum caliber of .270 required.

It appears that with 150 grains it would be legal for Leopard and Kudu.

If someone knows of any changes since 2011 please let me know.

I took my warthog with one shot from a 6.5 x 55 pushing a 140 Gr. pill at 2730 FPS. Total distanced traveled after the shot +/- 18" from vertical to horizontal. I've only used 140 Gr. and 156 Gr. bullets for hunting. Those two bullet weights have accounted for quite a few white tails and hogs in the States. Your Creedmoor should do just fine. 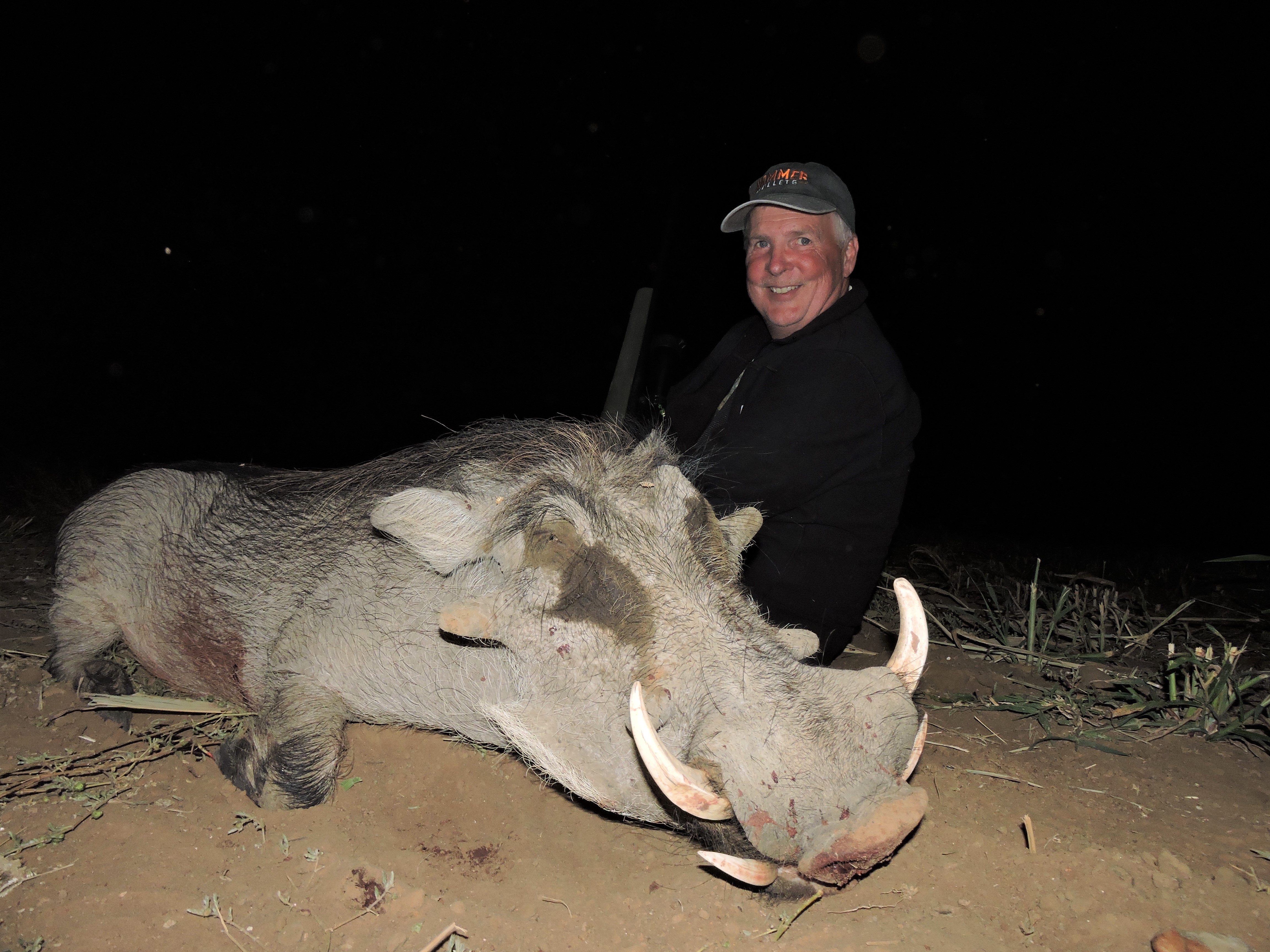 I shot a warthog with my 6.5 Creedmoor at 143 yards and it ran maybe 15 yards and rolled up. Also shot a blesbok at about 85 yards and it dropped at the shot. It’s all about the right bullet and shot placement. Your creed should do fine.
R

The 6.5 will make bacon. Up your bullet to the 143 gr. which is accurate as hell in my SAKO.
"A Dream can be relived, again and again in Africa."
2

I'm going to give the Norma 156 Oryx, 140 A-Frame and Partition and 130 TTSX a try. I'll find something it likes that gives adequate pentration and expansion.

2L8 said:
I'm going to give the Norma 156 Oryx, 140 A-Frame and Partition and 130 TTSX a try. I'll find something it likes that gives adequate pentration and expansion.

Haven't tried them, but I've read good things about the Woodleigh 160 PP, very high BC; and Lapua Mega 155, BC about like Oryx. I can drive tacks with ELD-X 143.
"Only accurate rifles are interesting." -- Townsend Whelen

I talked to Craig Boddington at the SCI show about the 6.5CR for PG. I"m using Hornady 143 ELD-X and he said it would be just fine. My outfitter uses a 243 so I feel pretty safe.
S

I'm getting good results in a Tikka 6.5 Creedmoor with the Barnes 127 gr LRX and RL16 powder. Brass is Nosler or Norma with F210 primers. COL is .050 off the lands, which puts the non BT portion of the bullet just at the bottom of the neck.

No pressure signs, and its below book maximum - based on the Alliant RL16 load data for the Barnes 130. (The next .5 grain of powder resulted in a compressed load and the group opened up, anyway.)

As this barrel has broken in (now over 300 rounds) the velocity has moved up to 2,954 fps using a MV3 Magnetospeed. To get my Shooter software in line with longer POA/POI I bumped up the BC to .500.

I saw some random flyers at one point, but it appears to be a copper fouling issue after mixing in some non Barnes bullets. Cleaned with Patch Out and then Sweets and it looks like the problem went away.

Accuracy is good, but not magical, at either side of MOA. But three this morning at 425 yards in a 10 - 15 mph crosswind was pretty amazing.
GA Hunter 2/2/2019: "....tell your outfitter and PH that a big kudu would mean a lot. Then go enjoy yourself and take what the bush offers."

Just got back from 10 days in RSA using my 6.5 CR in a Ruger M77. Absolutely deadly on springbok and impala. I used Hornady 143 ELD-X handloads with 37.5 gr of 4064. My longest shot was 280 yards on springbok and it planted him right there from a neck shot. The others ranged from 80 to 225 yards, all one shot kills. I was hesitant about such a light caliber but it sure proved itself. Small entry wound and an exit hole about the size of a nickel. None of them went more than two or three steps. I'm not a Hornady fan but I'd say that particular bullet will work on any pg.

@Newboomer when did you return? Report and photos? Did you use the 6.5 CR of everything?
I

Tra3 said:
@Newboomer when did you return? Report and photos? Did you use the 6.5 CR of everything?
Click to expand...

Tra3,
I got home late Thur. evening. Brian Seady, my outfitter has my pics and I will post when I get them. I used the 6.5 on 3 springbok and 1 black impala. The impala was a neck shot at about 100 yards. One of the 2 white springbok was at 280, one was 220 and my copper was about 80 yards. They all were dead within two or three steps. 200 yard zero with Hornady ELD-X 143 gr. I wouldn't try it but I believe that bullet would be good out to 450 yards or so. All my hits were through and through.

The 6.5 is one of those odd bullet sizes that seems to out punch anything close on either side of it size wise. Not sure what it is, but every animal I have seen shot with it looks like it was hit by a bus on impact. I will let my son shoot moose with it if he gets drawn for a permit and have no doubt that it will cleanly kill that 800-1000lb animal
“I never knew of a Morning in Africa when I woke up and was not happy.”
— Ernest Hemingway

With proper shot placement, the 6.5 Creedmore will kill a Tyrannosaurus Rex at 1000 yards. I read it on the internet.

Hogpatrol said:
With proper shot placement, the 6.5 Creedmore will kill a Tyrannosaurus Rex at 1000 yards. I read it on the internet.

Funny- but a 6.5 Creedmoor is perfectly capable of taking a moose.
“I never knew of a Morning in Africa when I woke up and was not happy.”
— Ernest Hemingway

Albert GRANT said:
Funny- but a 6.5 Creedmoor is perfectly capable of taking a moose.
Click to expand...

I agree BUT I don't want to hunt moose with a pea shooter and have to track the SOB through heavy brush or a swamp for the half mile that it takes him to bleed out. There are a lot more cartridges that will put them down instantly. Everyone's call but I'm going with something with a lot more horsepower than the CM for a 1000 pound animal.
"Every man dies. Not every man really lives". William Wallace
You must log in or register to reply here.