Again? Are we really hashing this out again?
Apparently stuff that's put on the internet doesn't last forever.
“They that can give up essential liberty to obtain a little temporary safety deserve neither liberty nor safety.” Benjamin Franklin 1759

BeeMaa said:
Again? Are we really hashing this out again?
Apparently stuff that's put on the internet doesn't last forever.
Click to expand...

BeeMaa said:
Again? Are we really hashing this out again?
Apparently stuff that's put on the internet doesn't last forever.
Click to expand...

Yes its the same song all over again but for the person who aks it will be his first Buffalo song I'm sure you were quite exited about your first?

Otherwise the forum would be dead with everybody knowing everything and nothing new coming up.

Thanks for all information. I am leaning toward the 300 gr Swift A-frames.
Will be using a Winchester Model 70 or a Heym 88B. Still in the planning stages. 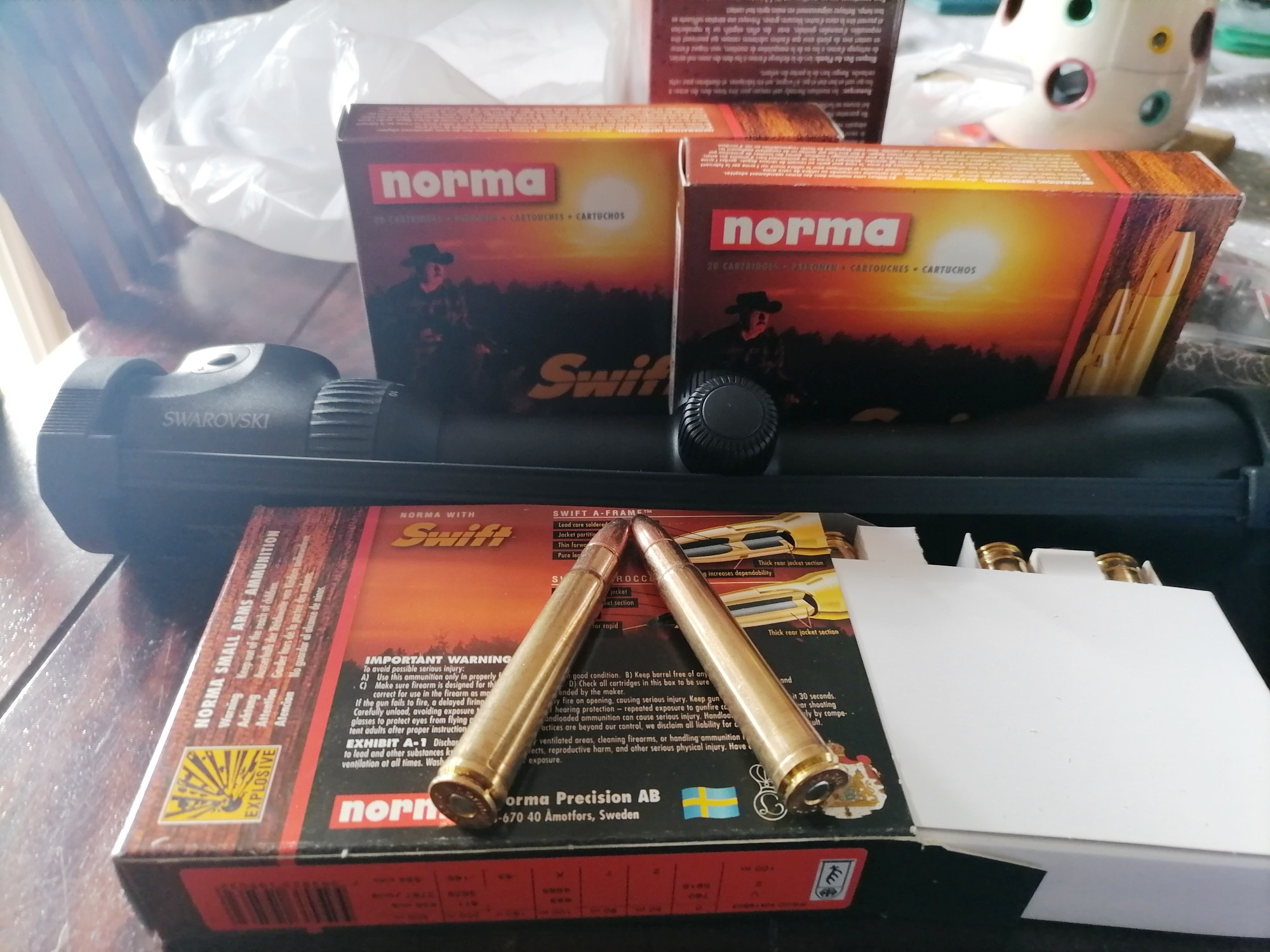 I am hunting cape buffalo this May. Only finding Federal Premium Cape-Shok Rifle Ammunition .375 H&H 300 gr SAF and bought 2 boxes. I read one needs hard nose for back up shot but can't find any. What I am reading on this forum is SAF is good enough. Reactions? Advice? My son just handed me a Sauer 202 375 HH for the trip as a retirement gift and that's why I am late to the game.

Grant Jones said:
I am hunting cape buffalo this May. Only finding Federal Premium Cape-Shok Rifle Ammunition .375 H&H 300 gr SAF and bought 2 boxes. I read one needs hard nose for back up shot but can't find any. What I am reading on this forum is SAF is good enough. Reactions? Advice? My son just handed me a Sauer 202 375 HH for the trip as a retirement gift and that's why I am late to the game.
Click to expand...

I hunt buffalo with a magazine full of either A- Frames or TSX. No one will second guess you - least of all the buffalo.
"We sleep soundly in our beds because rough men stand ready in the night to visit violence on those who would do us harm" American Novelist - W. Churchill

I was just wondering is there any available to buy? Shelfs look pretty empty around here.

In truth JMV375 and Grant Jones, much of what is written in this thread, and other similar threads, reflects more personal preferences - often but not always derived from successful hunts - than objective considerations.

In further truth, there is little to choose between the modern tough premium bullets. For example more or less all controlled expansion mono-metal bullets (Barnes TSX, Hornady GMX, Nosler ETip, North Fork, Peregrine, etc.) perform similarly, and there is little to choose between them and tough bonded bullets (Swift A Frame, Woodleigh Weldcore, Trophy Bonded, etc.). They ALL work great on Buffalo.

There are some objective considerations though, worth choosing from:

1) Soft vs. solid --- For Buffalo, it is well established that 300 gr .375 solids are likely to pass through on double lung/heart, behind the shoulder shots, and should NOT be used in herds where they are likely to wound a second animal behind the one being shot. All the modern quality controlled expansion bullets listed above will have enough penetration to wreck havoc in the vitals, but will likely come to rest under the skin on the opposite side, a most desirable outcome. Follow up shots are different. A solid is more likely to penetrate to the vitals from a rear end shot, which is also a desirable outcome.

Therefore, the first choice is whether to use only softs, or start with a soft followed by solids. If this is chosen, both soft and solids MUST hit to the same point of aim, which is not as obvious as it may sound, and care should be exercised during the follow up shots.

2) Not all premium bullets are the same --- I did not list, on purpose, the Nosler Partition in the above list of tough premium bullets. Although it is a remarkable bullet that has killed tens of thousand of Buffalo since the 1950's, the Partition opens a little too fast for the tough game. It is a better bullet than all the ones mentioned above for cats - precisely because it opens faster and more dramatically, often loosing explosively its entire front core in the process - but any of the above bullets is better for Buffalo.

3) 300 gr vs. 350 gr --- Many experienced hunters will confirm that going from 300 gr to 350 gr changes profoundly the effect of a .375 shot. To paraphrase Kevin "Doctari" Robertson, the well known veterinarian and PH from Zimbabwe, who alone has likely more buffalo hunting experience than all of us put together, 350 gr slugs step deep into .416 territory, thereby dramatically up gunning the .375.

Therefore, the second choice is whether to use 300 gr or 350 gr bullets. The 350 gr slugs will recoil a bit more, and the scope needs to be re-sighted for them (or a different scope in detachable mounts can be used). A wise choice may be 300 gr if planning to hunt herd bulls and a mixed PG/DG bag; and 350 gr if planning to focus on solitary dagga boys.

--- one Leica ER i 2.5-10x42 with BDC turret custom engraved to the 300 gr TSX clocked in my barrel for any PG out to any reasonable hunting distance, and buffalo in herds. This configuration also gives me the light gathering (42 mm objective) that I am likely to need for cats, and it only takes 7 clicks down to move from the TSX zero to the faster-opening 300 gr Partition zero (the Barnes TSX factory load clocks slower in my barrel than the Federal Partition load). I reckon that an A Frame would work just as well, but I have converted to the TTSX in all my PG calibers, so why not in the .375...

--- one Leica Magnus i 1-6x24 sighted with 350 gr Woodleigh FMJ solid for elephant (as a backup to my .470 K gun should a dream 60 pounder walk across a wide clearing and I cannot close on him at less than 50 yards), and 350 gr Woodleigh Weldcore RN SN (round-nose soft-nose) for elephant and hippo (on land) body shots, or dagga boy outside of a herd, should I not use my .470 K gun. The Woodleigh RN SN and FMJ shoot to the same point of aim, and one RN SN followed by FMJ make sense in these scenario.

To each our own, but there are both personal preferences AND objective options in this discussion
Last edited: Mar 26, 2021

I found Federal .375 H&H Cape-shok
300 gr Swift A-frames at Natchez Shooters Supply. $97 per box. Still in stock as of yesterday

Choice ammunition will load up 300 or 350 grain Barnes TSX for you. Takes them 2-3 weeks to deliver currently.

Thanks. I was able to get 2 more boxes this morning.

Thank you everyone for helping this "rookie", "newbee" sort this out, especially since I didn't mean to create a stir. Thank you Frederik: it is my first buffalo song. Hope to honor my father who took a cape buffalo in the 60's hunting in Tanzania. I will be glad to post a pic of it in a 6 weeks.

Grant Jones, we will be anxiously waiting for a full report and pictures of your success!
Africa on my mind.
D

I’m curious if anyone has used or heard of someone using the RWS 301 gr UNI Classic bullet (hand loaded or factory loading) on buffalo or if it would even be considered an option given design?

I just bought 3 boxes of Barnes 300gr TSX ammo from another member on AH tonight. The Barnes TSX works very well on buffalo in my experience. The Swift A Frame is also a great choice. Those are the two choices I have experience with. I've also heard good things about the TBBC, but haven't used them myself.

Norma African PH (Softs for the first shot and Solids for any follow-ups.) Read Kevin Robertson's books (Africa's Most Dangerous, etc.) The 350 gr bullets in .375 behave more like a .416 with their incredible SD.
"I never knew of a morning in Africa when I woke up and was not happy." -E.H.

Swift, Woodleigh and Barnes "softs" and solids also work wonders if you can obtain factory ammo featuring them. 350 gr for buff, although the Barnes 300s will do fine as even the TSX behaves more like a solid. The Barnes banded solids are amazing.
"I never knew of a morning in Africa when I woke up and was not happy." -E.H.
C

30-378 Weatherby
It is an awesome round.
You must log in or register to reply here.