I recently hunted with Nyamazana Safaris for a leopard for myself and a leopard and Cape buffalo with a fellow hunter.
The accommodations were either a beautiful lodge with a great view or a very comfortable tent camp with flush toilet and hot shower. Plus more beautiful views.
Throughout my hunt for the leopard the baiting process we saw leopard tracks of all sizes both male and female. We saw fresh tracks everyday so I know there were a number of cats moving.
Thank-you Wayne for a great hunt and outstanding trophy.
Jay Porter with J-S Worldwide Hunting 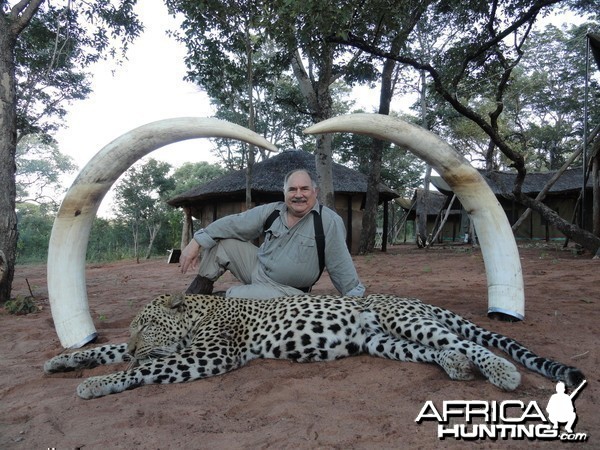 From your profile it appears your are in arrears over some other hunts to.

We'll start with this one though.

I first hunted with Wayne Van Den Bergh of Nyamazana Safaris in February of 2011 in Zimbabwe. I harvested a hippo a 14 foot 6 inch crock and my business partner harvested a 54lb elephant. It was a real hunt of a lifetime. I decided to return in July of 2012 and bring a life long friend with me. I went over two weeks before him for a leopard for me. What an experience with all the baiting, getting to harvest the bait, all the tracking and making the blind and then waiting for the leopard. It was a recipe for success, a monster 15 ft and 1/2 Inc beautiful leopard.
My friend arrives two weeks later and we went right to hunting. Wayne had been pre baiting and had a leopard on bait. We used dogs as my friend had a condition where he couldn't set still. The cat almost gave the dogs the slip but my friend got a beautiful leopard on the second day so with Wayne we had two leopards in about three week's time. My friend went on to harvest plains game, even a sable. From there we went 6 hours north for a cape buffalo. We hunted hard, got close a number of times but my friend couldn't close the gap. Wayne was able to get an elephant permit and the next to last day of his hunt my friend got a great elephant. Hunt conditions were dry and cool. Wayne gave us another hunt of a lifetime but moreover he did with our safety always in mind. I have been on a lot of hunts and I can assure you no one will work harder for you than Wayne Van Den Berg.
Jay Porter 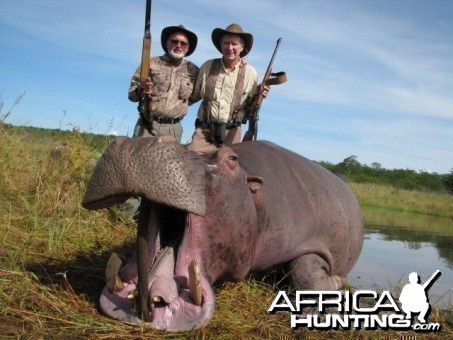 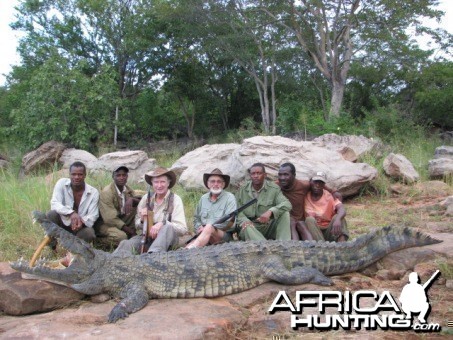 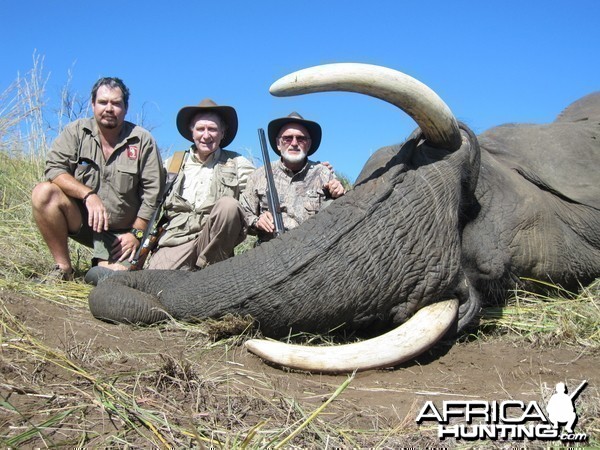 Thanks for sharing your story.
Exactly what you want to hear about an outfitter.
Worked hard and made opportunities available.

Thanks for the hunt report Jay!
Jerome Philippe, Founder of AfricaHunting.com

Welcome to AH Jay, please get your partner Steve in here! Tell him Phil requests his presence, he'll know who that is.

A Novice Elephant Hunters Journal - Part One
by Bruce Fried

On day one of my 14 day Elephant hunt I had shot my Elephant. Day 2 it was butchered. What next?
We had seen the tracks of a Tom Leopard on day 1 when we were after Elephant, Wayne mentioned that he had a tag for Leopard in this area, and if I were interested we could try for it. Yes!! So day 3 with Wayne's assistance I bought a donkey in the nearest town 35km away. We used the donkey for 2 baits and part of the trunk from the Elephant for 2 more baits. Day 4 the baits have not been hit. Day 5 there are still no baits hit so we work around camp and relax. Day 6 one donkey bait has been hit, there is still enough meat so no need to replenish.
Wayne puts the crew onto building a blind 50 odd meters away, while we go another one of his bush camps to check for Elephant sign for his next clients arriving soon after my hunt. At the other camp there is plenty Elephant sign at the camp itself where there is a water hole in front of it as well as at another water hole Wayne created , really allot of Elephant activity & Wayne is elated.
When we return it is around 1pm and the crew has finished the blind. I grab my rifle and we check out the blind to make sure everything is perfect , the viewing port holes , rifle rest and that all is at the right height, minor changes are made and we are set. We head back to camp to rest. At 4:30pm with chairs , cushions and reading material to wait. By 9pm Wayne has had to poke me several times to stop my snoring, Wayne expected the cat early so by 9:30pm I was expecting a bum evening. At 10pm Wayne whispers that the cat is chewing on the bait, he can hear it.. even though the cats presence wasn't indicated by the mono filament fishing line tied to the bait and attached to a sock weighted with some sand hanging between us was not moving, Wayne decided to trust his instincts and signaled me to rise and get into position, once I was set Wayne used a green laser type light to illuminate the bait. The green light gave the area an outwardly eerie look. At first I could not locate the cat lying on the branch because of the confusing change from natural light to Martian green. Finally the cat stood and I saw it. The cat started moving as I tried to get a proper sight picture as it casually walked towards a vertical limb that would block my shot. I thought about rushing a shot but then the thought of possibly chasing a wounded Leopard through heavy grass and brush made me wisely ease off the trigger. The cat was gone!
The length of time the green light was on must have made the cat uneasy but not frightened because he did not leap and run off just walked away. I was crushed and felt I had blown my opportunity for an impromptu Leopard. However Wayne motioned me to sit and relax, like a scolded schoolboy I complied. The area was dead quiet nothing! A hour and a half passed, I was no longer tired and received no anti snoring pokes from Wayne. Suddenly Wayne tugged on my shirt to get into position, he had heard the cat jump into the tree and now the sock was moving vigorously, this time Wayne decided to use his white flash light. The teak forest lit up in glorious Technicolor, I could see the Leopard on the limb quartering slightly towards me, and I put the cross hairs right where I thought the heart would be located at this angle and squeezed the trigger. My rifle roared and the Leopard fell to the ground like a stone! A couple of death coughs and the African night was graveyard quiet except for the wild beating of my heart and the hearty congratulations and cheering from Wayne.
It was 11:30pm on my 14 day Elephant Safari. What next??
B 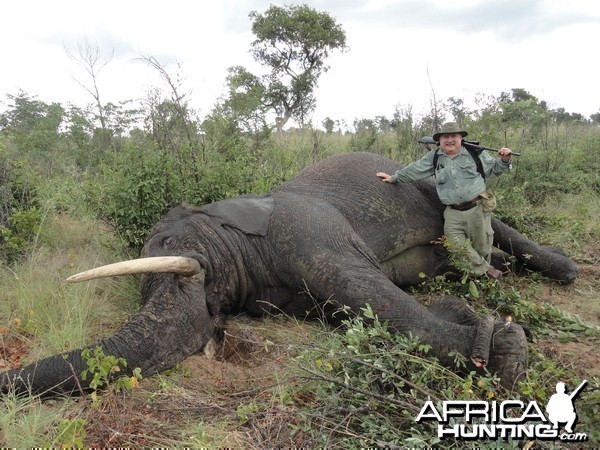 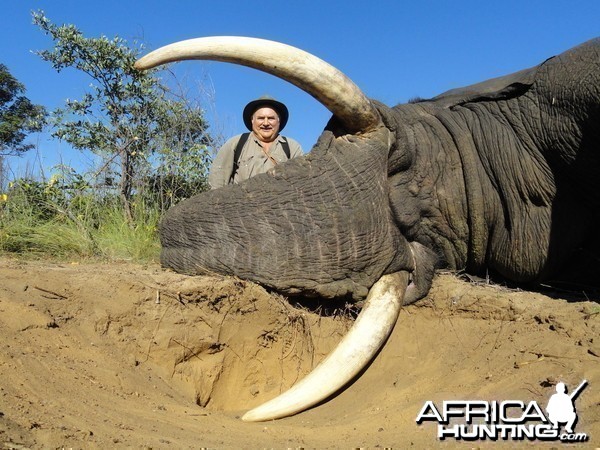 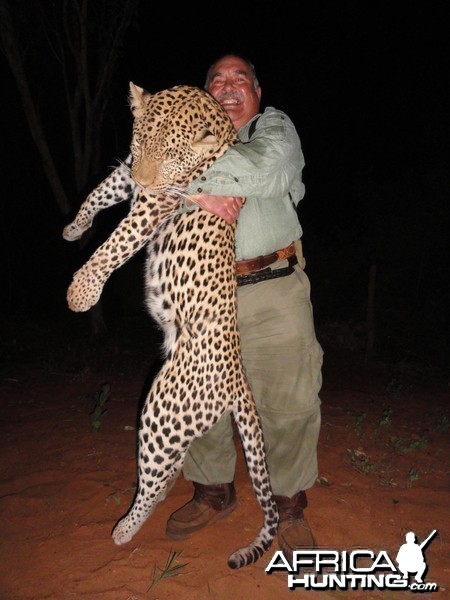 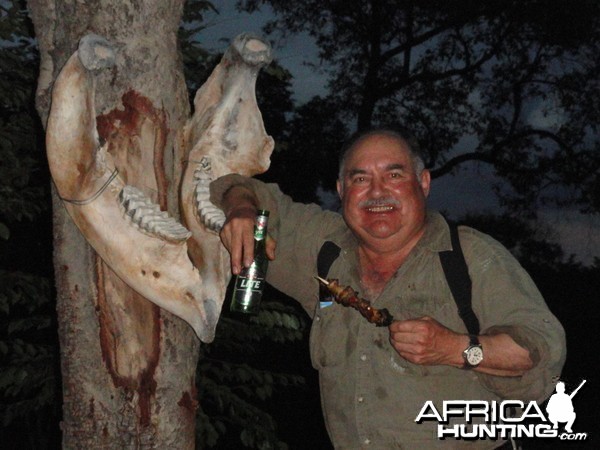 Thanks for sharing these moments with us Bruce! Wonderful pictures as well.
Jerome Philippe, Founder of AfricaHunting.com

Love the stories. Thanks for sharing. beautiful trophies too. Great memories... Bruce

Thanks for the pictures and stories, Bruce!

Fantastic trophies. I have an elephant hunt booked with Wayne for March 2014. I am already having a hard time going to sleep at night dreaming of the hunt. Your story is going to make me a complete insomniac. Congratulations! If your still in camp tell Wayne to save one like yours for me.
And here I am, returning to Africa of many faces;.... the sloe-eyed temptress with flowers in her hair who stole my youth and my heart, and left me an old man with a kaleidoscope of conflicting memories of many dashed hopes and some fulfilled dreams. E. Echols

very nice ele and a beautiful leopard looks like you had an awesome hunt,thanks for sharing withus welcome aboard
You must log in or register to reply here.

ZIMBABWE: Has Anyone Hunted Elephant With Nyamazana Safaris?
2

David Ansell
Does anyone know where to buy a chamber reamer to convert .458 win to .458 Lott? I hear it is very easy to do—?
18 minutes ago •••
G
Gerry Addison KKovar Gerry Addison wrote on KKovar's profile.
Do you still have the set of gaiters you talked about on the site? Gerry
Today at 7:21 AM •••
I
Ihuntbiggame Krist Atanasoff Ihuntbiggame wrote on Krist Atanasoff's profile.
Hi Krist, I’m interested in your Sako , can you please send me a email with a better description and your asking price . Thank you. From. Mike
Yesterday at 4:44 PM •••
C
CoElkHunter Mtn_Infantry CoElkHunter wrote on Mtn_Infantry's profile.
Mtn_Infantry,
That's a monster buck you have in your avatar! Very Nice! Anyway, my brother in law and myself are planning to do some fishing while in Port Aransas. I think he/we are planning on taking a boat charter out a couple of days. He's a serious fisherman and I am not. Any suggestions?
Thanks!
Mark Griffin
Thursday at 12:08 AM •••
R
Rocco490 TTundra Rocco490 wrote on TTundra's profile.
Okay sure. What is the address to ship the ammo to?
Send me a check to
Wednesday at 4:06 PM •••