What is the least used and least liked rifle in your safe? Why?

A few months ago, it was a Ruger American Compact in .243. I bought it a few years ago thinking my son would use it, but he got comfortable with a Kimber 6.5 CM and stuck with that. I used the .243 once and shot a deer with it, the gun just didn’t feel that comfortable to hold. The accuracy was good, but the enjoyment of carrying it was not. It found a new home with my buddy’s kids since it was the least used rifle in my safe.

I usually purchase a rifle or pistol with a intended purpose in mind.

But there is this one, a WWII era Japanese Ariska type 99 that had been sporterized with a new stock and barrel to 257 Roberts. It packs a 4x Bushnell scope of 1950 or so vintage. It was a very weak moment when I picked up that rifle.
If you don't care where you are, you are not lost.

I’ve got 2 that I would part with or rebuild.

First, a Rossi Ranch Hand .44 Mag. It is a Mare’s Leg like Steve McQueen carried in Wantedead or Alive. It’s a novelty. I regret buying it.

Second is a Siamese Mauser in (I think) 8x52mmR. The stock has been mostly sporterized. I would like to maybe have it built into something useable, but don’t have any plans. I know a lot were converted to .45-70. But if I was going to go to the expense, I’d like to get something I’d be more likely to use. Particularly, if I could build it into a good DG rifle.

Also back there is a Marlin Goose Gun bolt action 12 gauge with a 35” barrel. A dear friend gave it to me so I won’t part with it. But it’ll probably never be more than a wall hanger (for which I have no wall space or plans).

If I can can use a shotgun as aN example I have a Double Barrel shotgun made by Baikal.
Rarely used because I don't like it.
It hurts both ends and my ATA is much easier on the operator.
Chris “Australia"
Dreaming of Africa, Hunted Africa, 2020
The website made me do it!

Cheep, tacky, lousy trigger and served no useful purpose
I

Had one in there. Ruger mark II synthetic stainless 300 win mag. It was junk. Gone now.
This Site is Pretty Great

If it’s in my safe I like it! I did just sell a few rifles that were not being used nor were they likely to. The least used of what’s left is one of the Jap manufactured Winchester Model 12’s in 20 ga. When they were making them w mod choke for Browning they ran a few out w IC for Winchester. Nice gun, just no real use for it.

I bought a Savage 338 win mag last year and didn't realize it had a heavy sporter barrel on it. So I have spent a considerable amount of money swapping out parts and getting a titanium mount to get it down to 8 pounds 9 ounces scoped. It's still a little heavier than I wanted it to be.

And I've yet to shoot it. I'm kinda over it...I might trade it for a Savage donor rifle and create a 35 whelen. Then again, I bought 2 cases of clearance 338 ammo for like 25 dollars a box 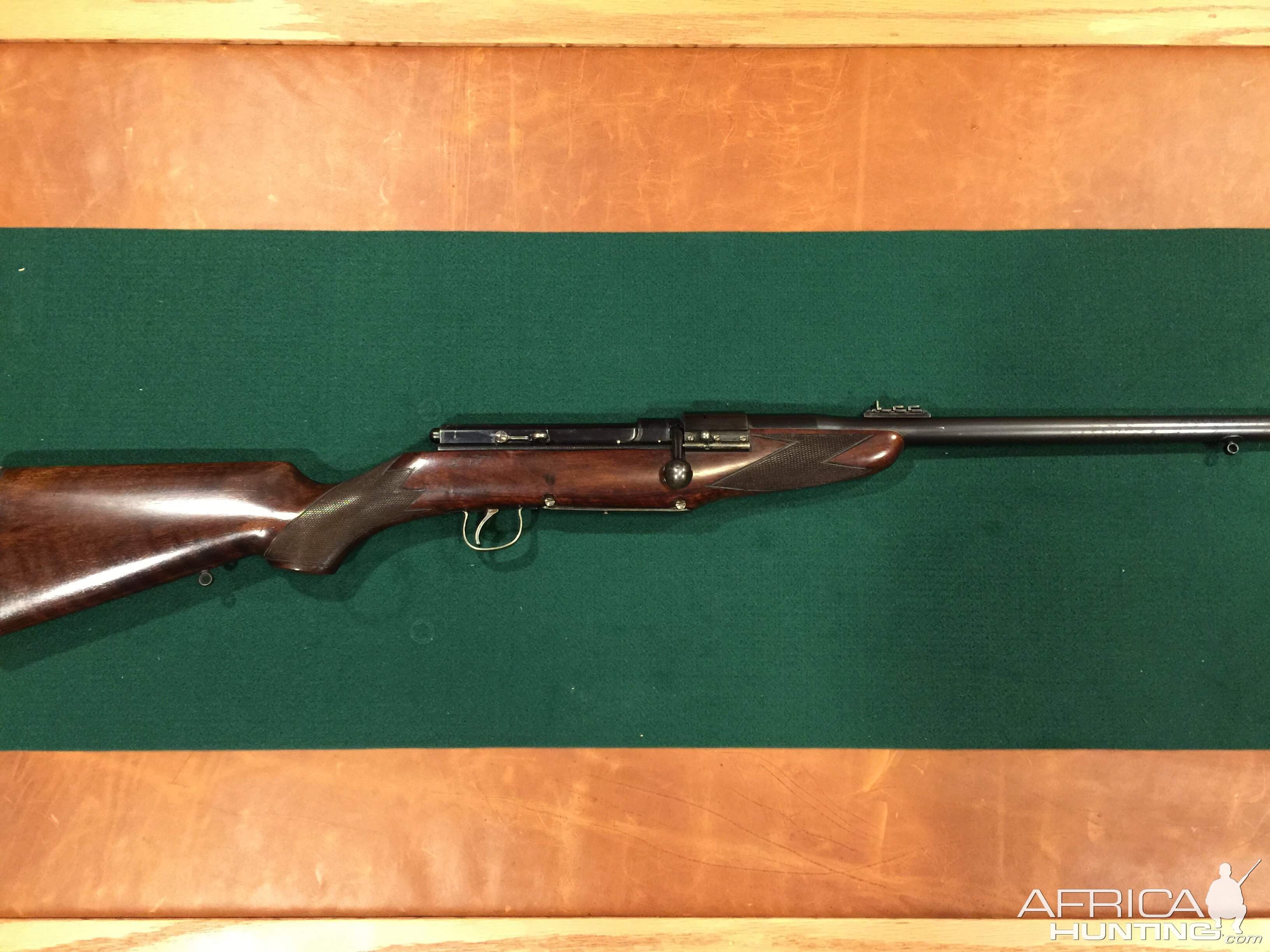 The "worst" rifle in my gunroom is a Cogswell & Harrison Certus in .450 / 400 3 1/4". It was patented around the turn of the century as an inexpensive rifle for Africa and India. The events of 1914-18 pretty much buried it before it was really launched. Not that it would have taken off, with a very long action, a safety from the mind of someone like Kalashnikov, and a locking bolt that has to be manipulated separately from lifting the bolt (potentially embarrassing during a charge). Everyone soon concluded the model 98 really was a far better mousetrap - particularly as true DG cartridges designed for a bolt action began to flood the market. It also has a habit of allowing the firing pin to slide forward slightly on closing the bolt if the bolt head is not reassembled correctly after cleaning (visions of the Ross). With two down and one in the chamber, it did offer an interesting and much cheaper alternative to a double - but damn.

And no, I have not had the courage to fire it. It is however a very rare curiosity which is why it retains a place in the rack. But it is indeed a terrible rifle.
Last edited: Sep 13, 2021
"We sleep soundly in our beds because rough men stand ready in the night to visit violence on those who would do us harm" American Novelist - W. Churchill

I bought Dakota arms in 416 Rigby with high end wood and a recoil reducer in the stock. Fired a box through it and placed in the safe. I don’t hate it but have never brought it out again.

Remington 600 Mohawk 308 with a 20 "bbl. and a composite stock. Kicks like a Missouri mule and is loud. I put a Timney trigger in it so it shoots good. The gun just doesn't feel right

Both looking for new homes.
J

I like then all but my least used is a Ruger M77 458wm RSC. Its a beautiful rifle but nothing that I hunt calls for it. On the other hand it has kept the elephants out of the garden.

Well, I'll take that off your hands

McMIllan Heritage Rifle, LH with CRF in .375 H&H. Never fired. Originally commissioned for a brown bear hunt that got canceled. I really need to take some pics and sell it. Here is a pic of a right handed one I found on the web.

Newboomer said:
Remington 600 Mohawk 308 with a 20 "bbl. and a composite stock. Kicks like a Missouri mule and is loud. I put a Timney trigger in it so it shoots good. The gun just doesn't feel right

That 600 will sell in a nanosecond if you decide to unload it.

My least used is my T/C Triumph muzzleloader. I really like it, but rarely hunt with it. Maybe some time I'll hunt with it out of the blind during rifle season. But I like all of my rifles, not that there's many. And that includes a T/C Venture, a Ruger American and a Vortex scope on my Tikka T3. I guess I'm easy to please! Lol. I have been thinking of trading the Ruger though. Not because of the rifle itself (it shoots really well) but because it's in .223 and my coyote hunting has really gotten less and less every year. I've had the itch to own a 7mm-08 for a few years now and the .223 will be the one to go. Was going to trade it on a Sauer 100, but waited too long and somebody else beat me to it. So now it'll likely be another Ruger American, a Winchester XPR, Browning X-Bolt or another Tikka. Maybe something else in that price range that I haven't thought of.
"I don't need to shoot farther...I need to hunt closer." - G. Sitton

Newboomer said:
Remington 600 Mohawk 308 with a 20 "bbl. and a composite stock. Kicks like a Missouri mule and is loud. I put a Timney trigger in it so it shoots good. The gun just doesn't feel right

Got a picture of the Mohawk?
You must log in or register to reply here.

Why not the Nosler Partition?
2 3

What has become of the Purdey bolt rifle?

G
gprippers SAFARIKIDD gprippers wrote on SAFARIKIDD's profile.
Hello! Nice rifle! I have IDENTICAL rifle in 375 H&H so i was wondering what gunsmith did the work on it? Appreciate it and if you decide there is anything you are willing to take in partial trade, let me know. I have quite a few pistols, long guns and sxs & o/u shotguns as well.