Switch from Bolt-Repeater to SxS Double?

About 60 years ago I started my lifelong love affair with guns. In one of Jack O'Connor's articles/books he wrote that handguns were fine as were shotguns, but his true love was for rifles, because with rifles there were hunts to far away places, trips to wilderness with rugged mountains and snow capped peaks. I was a convert. While I started out with a Semi-Auto 22 my first "serious" rifle was a first year production Remington 700 .308Win. With that rifle I hunted and roamed wildernesses in Alaska, Washington, Oregon, California and several states with road access. After a few years of military semi-autos, M1, M14 & M16 I reverted back to bolt actions- now including some collectable Winchester, Mauser & Mannlicher models.

Along the way I also had affairs with handguns as part of law enforcement employment. we supplied our own weapons- the criteria was that it was concealable and that we could qualify with it. My primary choice was a Smith M66 but also had occasion to use a Python and Browning Hi-Power. These got quite a bit of use because I could go to the police range or a few gun shops had short handgun ranges in the building- so access to facilities was much more available than trying to find a rifle range.

Then there was the trooper that invited me on a waterfowl hunt where I used a recently inherited Browning Lt 12 A5. Followed by a game warden friend taking me to a trap range, skeet range and then sporting clays. What happened was a transition from using guns that consisted of a repeating action and barrel, as had been the case with all the rifles, handguns and shotguns to that point to a new (to me) type: a non-repeating break-action double barrel.

the first was a Browning Superposed 20 ga. With the elimination of lead shot for use on waterfowl and only steel available for use, waterfowl hunting was terminated, so the 20 ga was entirely suitable for upland birds. But as with all good things, other break-actions became available. Soon the A5 was left in the rack and a double barrel was selected. Additionally, soft non-tox shot was developed so that the old fixed choke barrels could once again but used for hunting.

So now the M66 and Hi-Power have been sold to fellow officers and the Python collects dust. Trips to the police range have stopped following retirement. The repeater shotguns also collect dust in the safe since for any shotgun use I find my preference is a Winchester or Parker SxS.

Now comes the dilemma. Considering the complete transformation from repeaters to break-actions that has occurred with shotguns, do I dare try a break action high powered rifle? could it be that if I get a quality Merkel, Heym or similar SxS, that it will cause all of those M70s, M98s et al to become superfluous? Would I be faced with choosing the SxS for elk hunting and leaving the M70 Alaskan 338 in the safe?

Will it be as I've heard of some addicting drugs that once you try it, you are hooked for life? Should I leave well enough alone?

Or, as with the Superposed of long ago, it started me along a very enjoyable and rewarding path of SxS use? I guess I won't know if I don't start laying plans to try.

Try a double and see how it works. You may find a niche for it--like dg in Africa and, depending on caliber, bad critters in Alaska or big game in the lower 48.

It is a slippery slope you are on, you should sit back and enjoy the journey.
Buying a double isn't for everybody, but you have no reason not to give it a try.
There is also a steep learning curve on doubles that I don't even pretend to understand 10% of it.
Do your research and ask the membership here for help if you can't find a thread on the subject.

Maybe another member who lives close can let you give one a try and go over a few things with you.

What animals are you interested in hunting with it?
This will start you down that slippery slope...
Best of luck.
“They that can give up essential liberty to obtain a little temporary safety deserve neither liberty nor safety.” Benjamin Franklin 1759

I like and use them both. The key with a double is to find an accurate one so that you can use it on something besides a buffalo or elephant at fifty feet. That means a 2.5 - 3 inch LxR/LxR at 100 meters.
"We sleep soundly in our beds because rough men stand ready in the night to visit violence on those who would do us harm" American Novelist - W. Churchill

"The past is a foreign country, they do things differently there." L.P. Hartley
E

Doubles either grab you or they don’t. There is only one way to know.

They never truly replace bolt actions in all contexts, but will certainly add to the fun.

For me, and many others here, they bit hard and the bug is still with us. 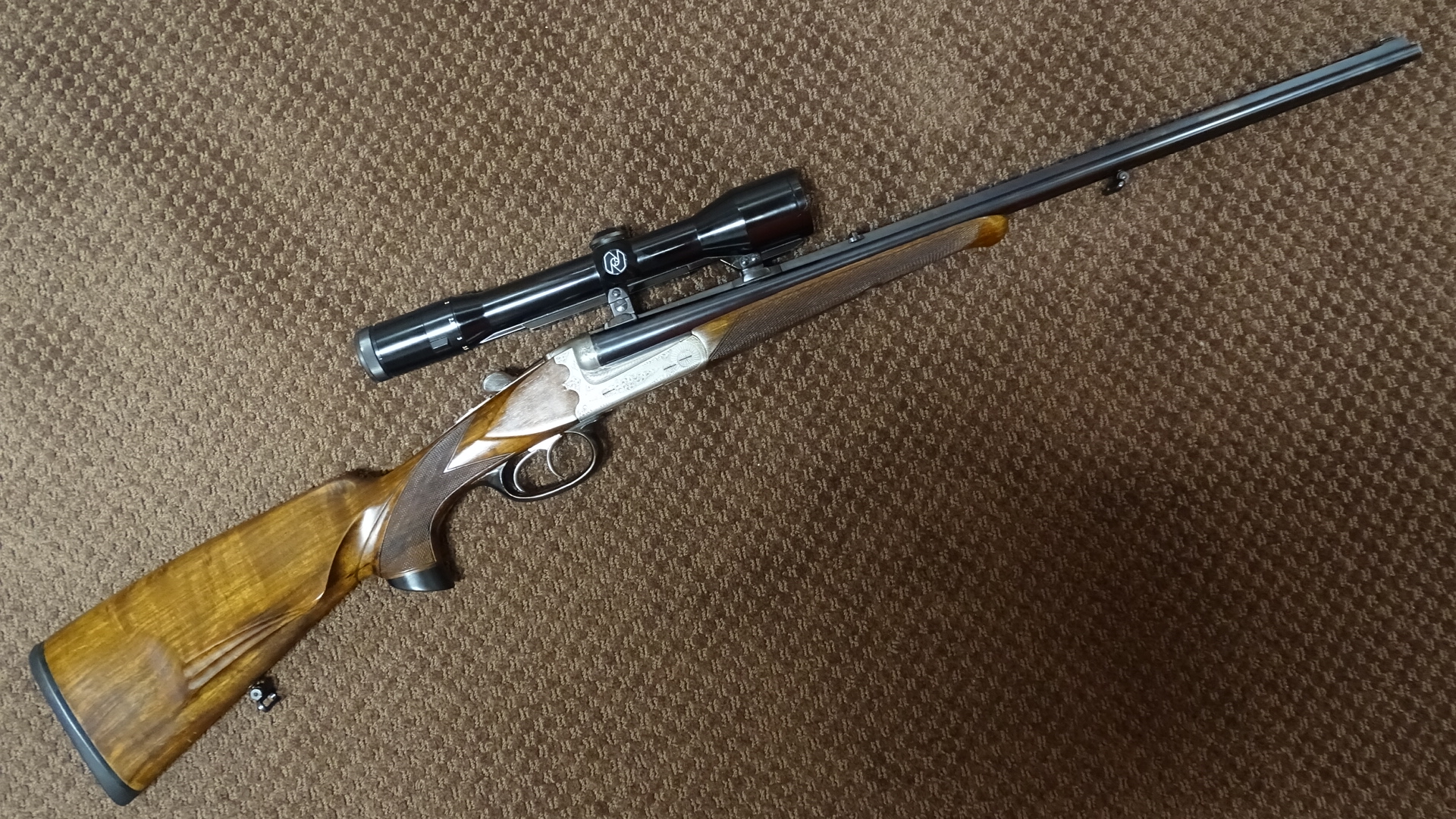 Touch it, and considere you hooked

HWL
Relying on Mauser M98,.... but having an ever lasting love affair with Mannlicher-Schoenauers....
I

I would go with an O/U in smaller calibers, with QD scope

R
Can a Double be very Far in the Future?

I want a Howdah pistol