Snakebites - Who Gets Bitten & Who Dies?

Try Australia. Top 11 deadliest snakes in the world. If bitten by the Taipan you WILL die without antivenin.
Rare like Africa to be bitten though.
Usually by cornering or by threatening.
Welcome to Oz

My odds just went up significantly...... Asides from living in Texas and being an outdoor bug. Apparently, alcohol plays a factor. DOH!!!!

That shock treatment was pretty interesting, not sure if the guy just bitten by a snake would let you taze him a couple of times. could be a great story to tell around the fire...

Don't post much because I'm here to learn for future adventures and have nothing to add about African hunting. However, I can contribute to this. I didn't stay at a Holiday Inn, but trust me, I am a doctor (herpetologist).

The whole stun gun therapy for snake bite treatment started in Brazil (I believe) around the time of the posted article. It was based largely on fabricated data to sell a product - much like the Arizona bark scorpion venom toxicity data. Any perceived positive effects of shock treatment observed in a few cases was due to a positive outcome that would have come anyway. At the very least, a good shock would certainly calm down a bite victim!

Cucuy said:
Don't post much because I'm here to learn for future adventures and have nothing to add about African hunting. However, I can contribute to this. I didn't stay at a Holiday Inn, but trust me, I am a doctor (herpetologist).
Click to expand...

Glad to hear from a pro on this. Is there anything a layperson could/ should do if bitten by a neurotoxic snake like a cobra or mamba? I mean apart from getting to an ER of course. I'll admit that contact with snakes in the bush concerns me a lot more than contact with our N American varieties.

Edit: Then again, the mathematician in me can't help but womder if there are animals that I should be more concerned with than snakes while, say, hunting buffalo

Back in the day when I worked in Panama, bushmasters (not the ARs) and fer-de-lance were the ones to fear. The odds of getting bit were slim unless you were wondering around in the bush at night.
"Every man dies. Not every man really lives". William Wallace 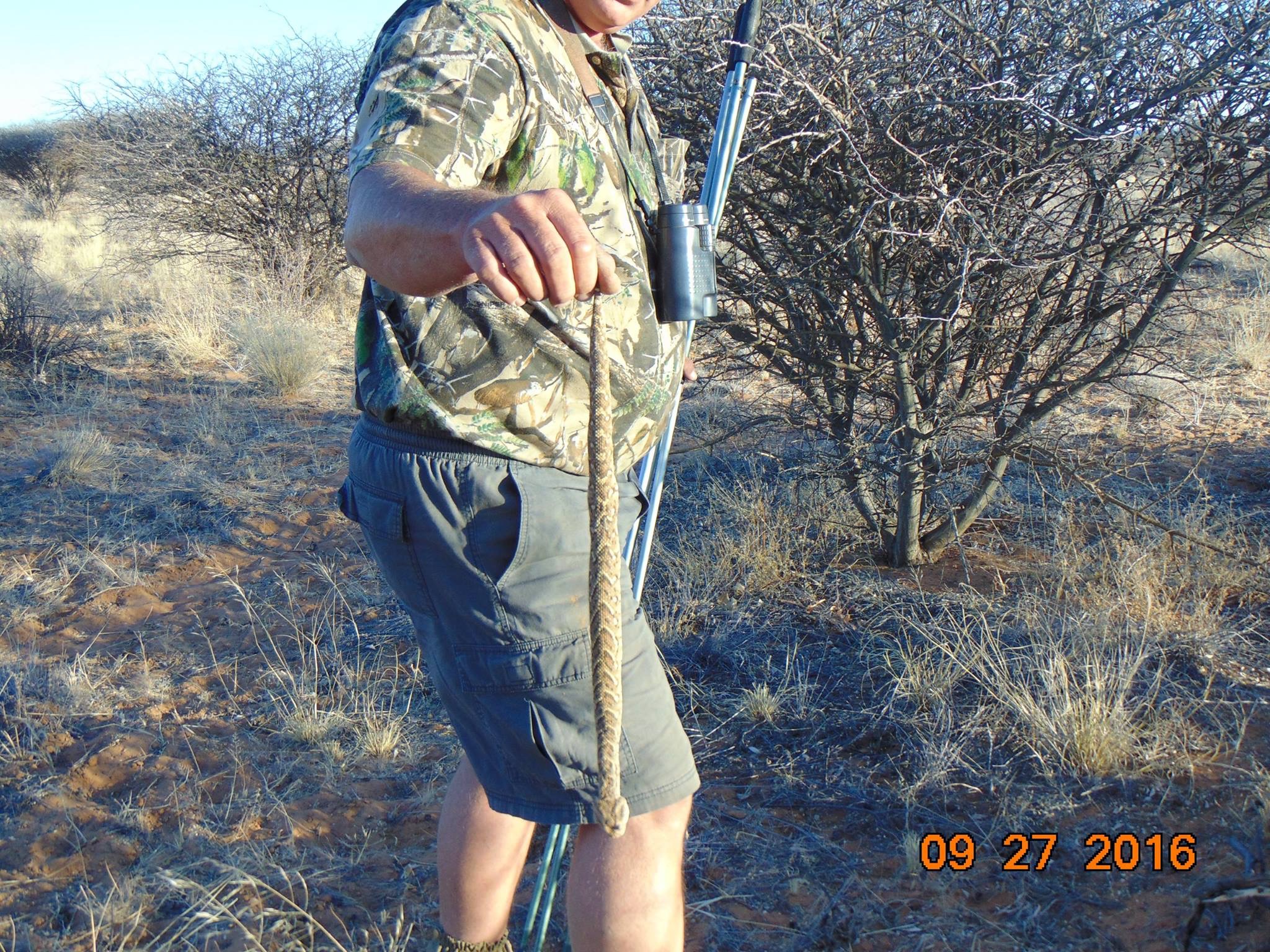 This was my first encounter with a poisonous snake in three hunts. This was in Namibia and as he is only about 16 inches long , I passed him about two feet away. I never heard him as my hearing is bad, my PH heard him and warned me.

Looks like a young Puff Adder. That would have been an unpleasant bite.

It was young. About the time my sister who was with us, asked if Kurt was going to let it go, he killed it.
M

Many people dread snakes – so much so that they actually avoid going outdoors to fish, hunt, hike, or picnic. Others, out of a misplaced fear, will kill every snake they see. This is unfortunate because it’s fairly easy to avoid direct encounters with snakes.

Snakes are reptiles, and like their relatives, lizards and crocodiles, are covered with scales, are legless, cold-blooded, can swim and have been around for millions of years. All snakes eat other animals, while some snakes even eat other snakes. But snakes, even venomous ones, are important to the environment and help to control populations of rodents and other pests.

As an outdoor enthusiast, it’s really only a matter of time before you will encounter a snake in the backcountry. But contrary to popular belief, snakes are not in the business of looking for people to bite. Despite their sinister reputation, snakes are more afraid of you than you are of them. Most snakes do not act aggressive toward humans without provocation. Although many harmless snakes will bite to defend themselves, usually their bite produces nothing more than simple scratches.

Only about 400 of 3,000 snake species worldwide are poisonous. These venomous snakes are most prevalent in temperate and tropical climates, with April-October being peak snakebite season. About 25 species of poisonous snakes are found in North America.

The Risks of Dying from a Snakebite

The chances of dying from a venomous snakebite in the United States is nearly zero, because of the high-quality medical care in the U.S. Fewer than one in 37,500 people are bitten by venomous snakes in the U.S. each year (7-8,000 bites per year), and only one in 50 million people will die from snakebite.

In North America, approximately 10-15 people die per year as the result of a venomous snake bite. The risk of dying from a venomous bite increases when multiple bites are involved and when the bite occurs in the very young, old, or in persons with underlying respiratory or cardiovascular problems.

Compare this with the 11,000 reported deaths that occur in South Asia each year, accounting for over half of estimated snakebite deaths worldwide. Poor, rural areas that lack appropriate medical care and the correct antivenom contribute to this high number of snakebite fatalities.

Who Gets Bitten By Snakes?

In the United States, a significant number of people who are bitten are the ones who handle or attack snakes. The majority of poisonous snakes in the US are pit vipers. Rattlesnakes, copperheads, and cottonmouth (water moccasin) snakes are in this family, known as Crotalidae. Typically, pit viper victims tend to be young males, 11-19 years old, who are bitten on the hand while trying to pick up the snake. People attempting to take a “selfie” with the snake are at high risk of being bitten. Alcohol has also been shown to be a common factor in these incidents.

For Venomous Bites: Antivenom is the only proven therapy for snakebite but only when it is specific for the snake involved.

DO NOT try to kill or capture the snake for identification purposes.

Dead snakes, even several hours later, can reflexively bite injecting venom causing either a second bite or biting another member of the group. Use your smartphone to get a picture of the snake instead.

As with any deep puncture to the skin, infection is a concern. The wound should be irrigated and cleaned at a hospital emergency department or emergency health clinic. The person who is bitten by a snake may need a tetanus shot. Tetanus boosters should be given every 10 years.

Take Global Rescue with You

Wherever you travel, Global Rescue encourages you to study of your destination and research the native flora and fauna that might be harmful. Be prepared and expect the unexpected. And it you travel to a remote area, take a Sat Phone with you.
Click to expand...

Here in Arizona, we have more than our fair share of Rattlesnakes, primarily because of too many "Snow Birds or (aka) Winter Visitors, who put out blocks of bird food while they are here. When that food gets to the ground it is eaten by little critters. Putting out food for birds seems on the face of it kind and responsible till our well-meaning visitors leave and the critters who are left will either starve or the snakes will get them.
In any case, don't put out food for any wild creature unless you're in it for the duration of that animals life. Please.

I asked my PH what he had in his toolkit for a Momba bite. My PH (Adrian) @ Lowveld said a book??????? A Bible was his medicine for that bite!

If its a Black Mamba that bites you the chances are very good that you will die.
Anything else you'll probably live.

Delta5Cav said:
View attachment 182511This was my first encounter with a poisonous snake in three hunts. This was in Namibia and as he is only about 16 inches long , I passed him about two feet away. I never heard him as my hearing is bad, my PH heard him and warned me.
Click to expand...

Its a pure mess if they get you.
People rot away from the inside and even smell like they've died.
Ive seen somewhere their venom is not far off that of a Rattlesnake.
There was a case some 20 years ago where some hospital in USA flew anti-venom in from South Africa that we use for Puffs and they used it on a dude bitten by a Rattler.
It worked.

Im not to frightend with snakes.
But this situation would be "interesting".
I had it in my mind, when I went on the "meetings" in Africa
Foxi 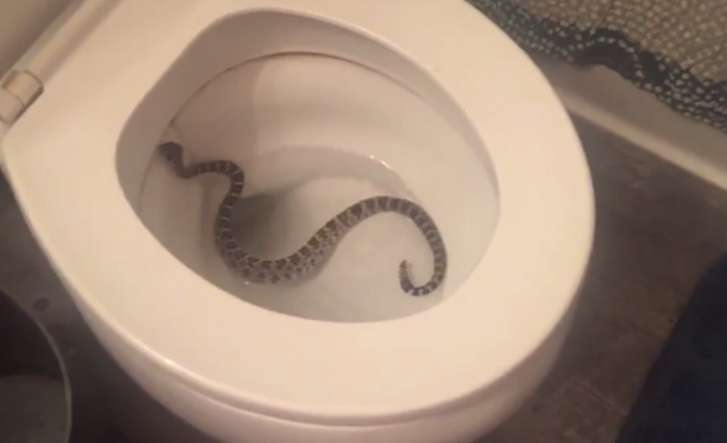 I'm one that dreads snakes; they don't keep me from going outside or enjoying the outdoors but the thought of them drives me nuts. I just moved to Arizona and have no idea what snakes to expect. I do have a 410 shotgun just for them though.

I'm gonna have a stroke if the poison doesn't get me . Hate them $(&is.

Are snake boots or gaiters recommend for hunts? Why don’t I see many folks wearing them?
F

I remember as a child going to London zoo. There was a snake bite display in the reptile house that was as fascinating as it was horrific. I’d grown up with films showing two neat puncture wounds, the recipient of said bite going woosy and drifting into death to the massed sound of violins. The reality was worryingly horrific. The effects of, especially the haematmoxins, in some venom was brutal. Even if one survived, the damage to the limb was probably life changing. I’ve never forgotten it.

My reptile identification is not too bad but I’d rather not put it to the test. My last discharge at a reptile was a mamba and I’m glad my place in the food chain prevailed. I’m not one for killing for the sake of it and, despite many things, I have a fond regard for reptiles but, once the line is crossed, I’ll take great comfort in my 12 bore doing what it is most comfortable doing.

FN
You must log in or register to reply here.