Hey guys I was offered a Smith and Wesson model 27 in 357 Mag and 3" barrel in VG condition for $300 and would like some opinions. I have a couple model 686s, how do they compare. I'm in Canada so the short barrel is classified as prohibited here however I have a prohib license so I can purchase. Thanks
G

I absolutely love my Model 27s. I have owned five or six and still have two. I also ave owned two Colt Pythons, I no longer have either but, still have the 27s.

There are several models made through the years. If you find an original with a pinned 3.5 inch barrel in excellent condition, they can go for $600-$800. We need to know which one you have.

Many consider the original the finest of modern era revolvers.

One of the great all time handguns. Value is all about original condition. It normally came in 3.5 inch or 6 inch configuration. Assuming it is actually a 3.5 and not a bobbed barrel and that it is not badly worn or wearing a re-blue, it is a valuable handgun. If it has recessed chambers rather than the more modern un-recessed ones, it is a bit more valuable. A basic 27 in 100% condition is $1200 handgun. The same model at 80% is a $650 handgun. Different configurations unique to particular runs such as recessed chambers can add 20% or so to the value. If re-blued, it has no collector value as such, but would still be a fine handgun to shoot. Then it is worth whatever someone is willing to pay for it. Hope that helps.
"We sleep soundly in our beds because rough men stand ready in the night to visit violence on those who would do us harm" American Novelist - W. Churchill

"The past is a foreign country, they do things differently there." L.P. Hartley
J

As above, outstanding deal if it isn't all messed up. Grab it!

Thanks all, I will do more checking only have second hand info on it. Trying to get some pictures. Reason price is so low is it is a prohib in Canada and very few people here can buy or possess one. Short barrel under 4" is prohibited here. Thanks for all your help on this. I will let you know if I find out more.

cls said:
Hey guys I was offered a Smith and Wesson model 27 in 357 Mag and 3" barrel in VG condition for $300 and would like some opinions. I have a couple model 686s, how do they compare. I'm in Canada so the short barrel is classified as prohibited here however I have a prohib license so I can purchase. Thanks
Click to expand...

BUY IT!!! If you don’t you’ll always regret it. I only have experience with 4” and 6” but they are sweet revolvers. The large N frame makes them very shootable.

In early 1970s, I purchased one at Montgomery Wards in Fort Worth, TX for $159 as I recall. An excellent shooter. My policeman bud told me the 6” was heavy enough that if you ran out of ammo it could still work as a club. He was quite serious about it. He loved his service weapon!
Sadly I sold mine due to needing some funds some years later. If I come upon one for that price, I’ll buy it!
Last edited: Oct 23, 2020
Africa on my mind.
5

You will NEVER find one for that price again...buy

I had one in 6", one of the best revolvers ever made !

Hi All, finally received a picture of the firearm. 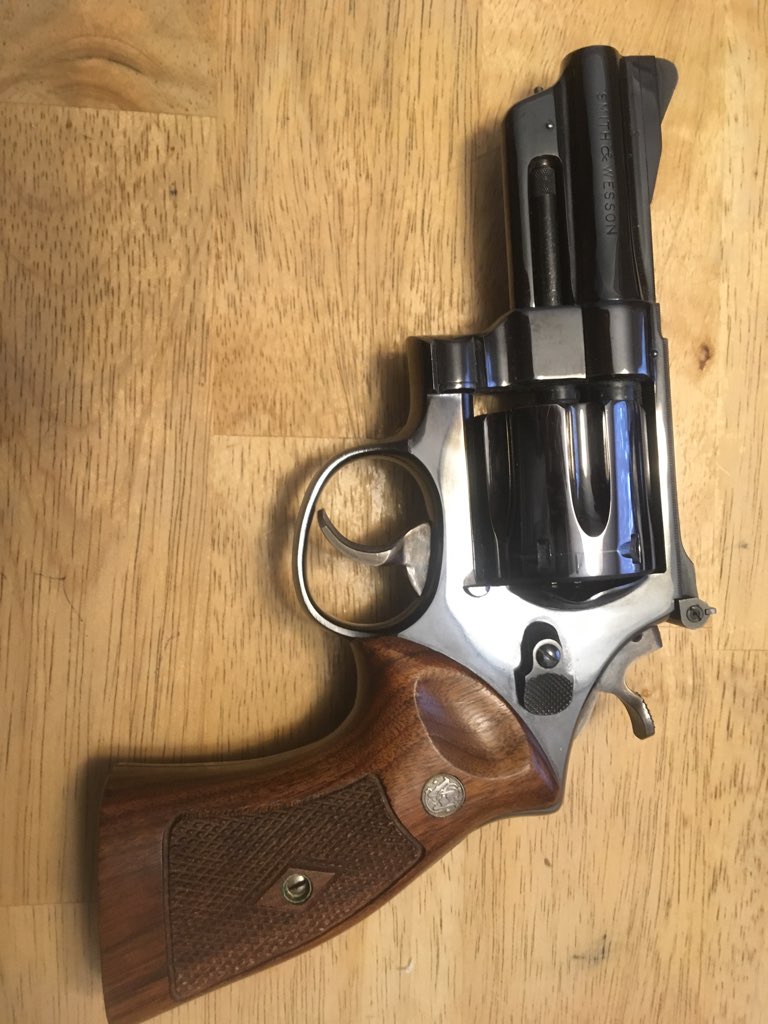 Looks to be an older version (pinned) 3.5" barrel and in VG condition.

CLS, if you don't buy that gun for $300 I'm going to ask Jerome to cancel your membership for being stupid. Just kidding, snap it up immediately.

Shootist43 said:
CLS, if you don't buy that gun for $300 I'm going to ask Jerome to cancel your membership for being stupid. Just kidding, snap it up immediately.
Click to expand...

No obvious holster wear, grips are not beat up. (I have the same gun bought in 1973, but it shows considerable wear.) This gun is probably worth close to at least $1000 around here.

Various production changes and serial ranges or prefixes can help put it within a DOM range.

One thing to be aware of for complete disassembly of cylinder is that there can be either right hand or left hand thread on extractor rod.... the knurled rod end on more than one 27 has been buggered with attempts at unscrewing the wrong direction! 1960 (27-1) change from right hand thread to left hand thread.

I would look closely at reblue/refinish- kind of looks like the grips show a wear while the metal doesn't. Grips could have been changed to earlier diamond grips or the metal has been refinished??

I finally received the transfer papers on this sweet revolver and picked it up this morning. It is totally original one owner. Seldom used. It is pinned and with a counterbored cylinder. From what I understand from the serial number and other markings this particular revolver was manufactured late 56 to early 57 and was pre Model 27 which would make it "357 Magnum". It is in great condition and has not been reblued.
It never ceases to amaze me how knowledgeable and helpful the people here on AH are. Thank you all for your help and comments.

Congratulations on the new revolver! I think you did tremendously well on the price!

Very nice catch on that revolver!

Very nice Smith. I’ve been looking for a good 29/629, you got a heck of a deal!
You must log in or register to reply here.

**POSSIBLE TRADE** For the Win Mag I have listed!!