We have to be vigilant because I think they can fudge the results by voting multiple times from multiple machines.
"When my friends tell me that I have led a remarkable life, I have to admit having done my best to make it so" - John Kingsley-Heath 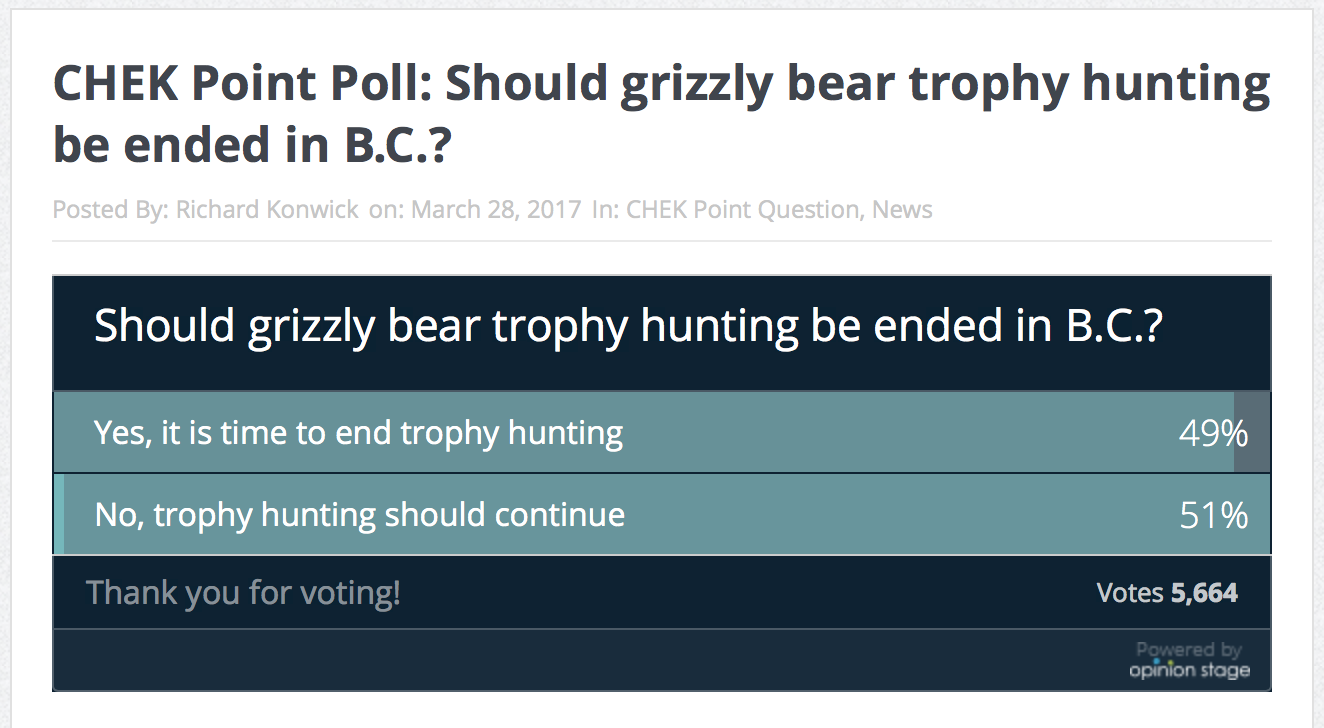 We're down now, 53% to 47%. Hopefully everyone will vote, because I can't believe this is happening in BC.

This is the same thing except it was on our ballet that stopped spring hunting and baiting of black bears in Colorado. Why people with no wildlife biology education think they know how to manage wildlife.
I guess if they could get medicines, they think they could medicate themselves. Or design and build a car or airplane.
We live in a very ignorant era, IMO. but what do I know? I'm just an old engineer.
Africa on my mind.

Voted, Thanks all I draw a tag (limited entry hunting resident tag ever year) Chased a big bruin last year, but he was chasing a moose he had taken a swipe at ( leaking blood) saw them but couldn't get a clean shot final ran out of day light. Just to state the obvious the grizz populations are VERY healthy in Northern BC.
Cheers
Pat

Done.
15.000 grizzlybears are living in BC.
Hunting rate yearly : 300 -350 heads
Round 2%
Its almost nothing.
When the public opinion close grizzly hunting in BC ,they never can be hunted in our generation.Im sure of that. Equal how much they are.

By the way,one of the greatest bear killer is the Canadian Pacific Railway ,especially when the train is loosing wheat,corn and such agriculture things during the transport through the country. And also where killed a big number of bears,because they love to eat the lubrication fluid the train-wheels are loosing.
(a friend of mine was working for railway security in Alberta).

Best example is Romania.
They have much to much brownbears and the government closed it .
Reason: European public pressure
When you are a hunter, you are a devil.
An argument has no worth in that days.

I suspect you are getting people voting from different computers and double counting their votes.
"When my friends tell me that I have led a remarkable life, I have to admit having done my best to make it so" - John Kingsley-Heath

Wait till a couple of these anti-hunters go walking in the woods there and get their ass chewed off by a bear they'll be screaming you got to do something about these bears!

Pheroze said:
I suspect you are getting people voting from different computers and double counting their votes.
Click to expand...

A lot of the same people eat meat, fish and chicken and they think nothing of that. As long as someone else does their killing for them.

Ragman said:
Can we do that too?
Click to expand...

As far as I know there isnt anything that would prevent it as it is dependent on an IP address. Maybe the computer savy here can clarify?
"When my friends tell me that I have led a remarkable life, I have to admit having done my best to make it so" - John Kingsley-Heath

just went to work computer and it voted a second time

Antis way ahead. Too bad some of them wouldn't get out of town and go camping in areas with high griz populations. One way or the other they might see the light.

Pheroze said:
We have to be vigilant because I think they can fudge the results by voting multiple times from multiple machines.
Click to expand...

Really, you can do that?

I voted 6 times.
Do you think that skewed the numbers in this incredibly scientific poll?
Last edited: Mar 30, 2017
J

I voted twice, now I'm gonna look for another computer so I can vote a third time

Hunters are never going to win on a straw poll like this one is.

There are way more non hunting anti's than there are us hunters and you can tell by the way that it was worded that it was tilting towards the anti hunting crowd.
If you don't care where you are, you are not lost.
You must log in or register to reply here.

Please Vote NO to the British Columbia Grizzly Hunt Ban

L
Trophy Hunting Is Macabre, But It May Also Be Endangered Species' Best Hope For Survival