Interim update. My daughter passed her hunter safety class Wednesday night. She is two year's younger than the youngest grad the instructors that run these courses in Southern WI ever had previously. She also scored a perfect score on the exam!

Her reward is attached: I built her a custom model 70 pre 64 in .243 featherweight contour. Talley QD rings and bases. Schmidt and Bender 1-4x scope. Two pads with a quick release system. 11-1/4" length of pull at present with the short pad. After her hunt coming up in Feb it will get checkered and another ten layers of oil finish with some rotten stone at the end.

Looks beautiful, has she taken it to the range yet? February is coming up shortly!!

Just think, if this rifle works out well for your oldest daughter what are you going to do for her siblings??

P.S When the kids get 100s on their Hunter Education Exam I know I've done my part, to help insure the next generation of safe hunters. Your daughter's perfect score helped make some old codgers day.

Her first two targets from her first range day. 17hmr and then her .243.

I would not like to be a deer within 200 yards of her. Not bad for a 7 year old's first range day! (Sorry for bragging on my kid)

I suspect that the younger two kids will either inherit this gun if the daughter upgrades, or she'll get a custom stock for a lady someday and the younger kids will get a hand me down stock for another model 70.

I'm so impressed with pre-64 model 70 featherweights. Unreal accurate. Really smooth. Not a penny more than a new quality rifle from remington or FN. Same goes for commercial Mausers, truly bargains on the secondary market. 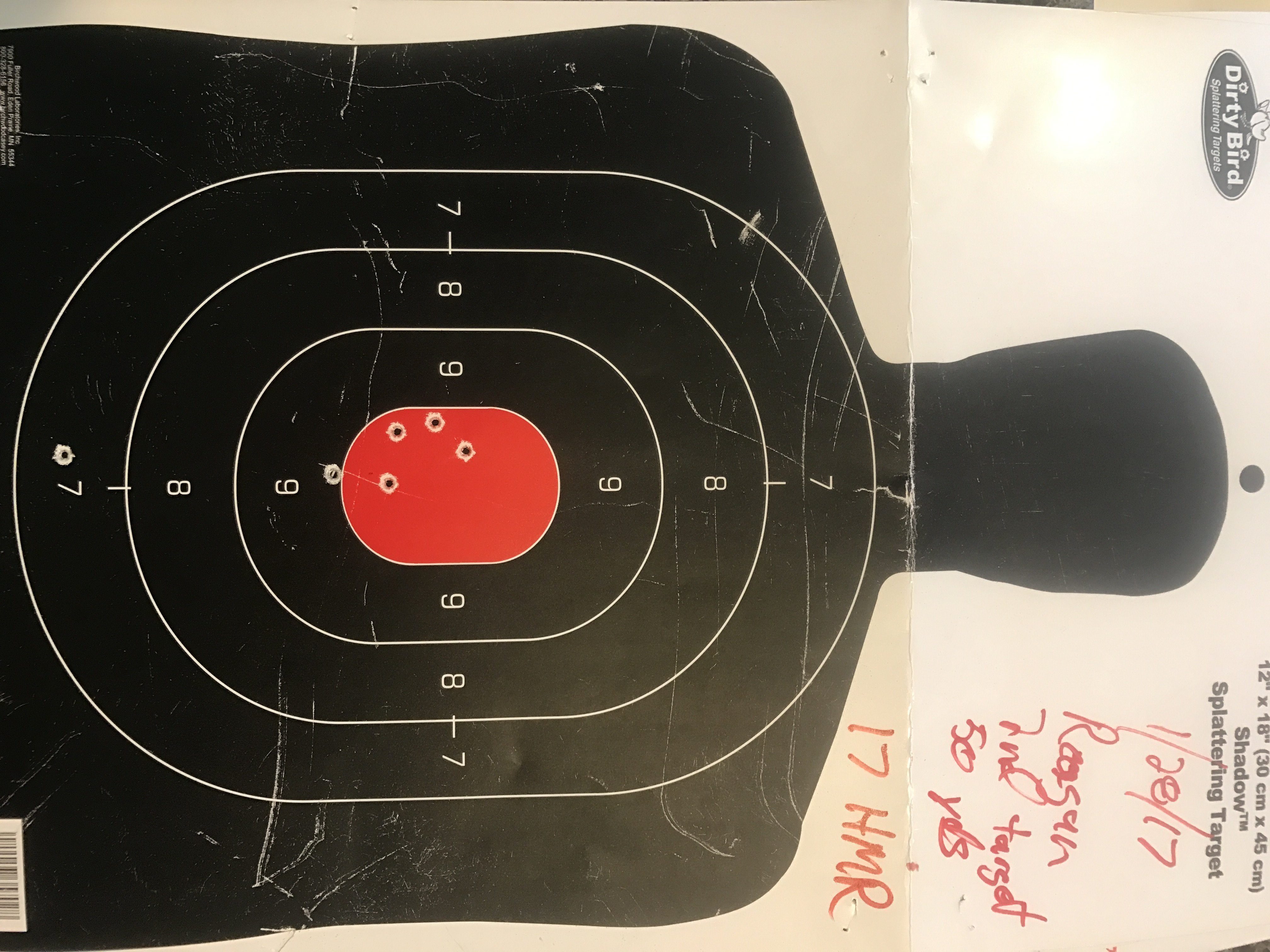 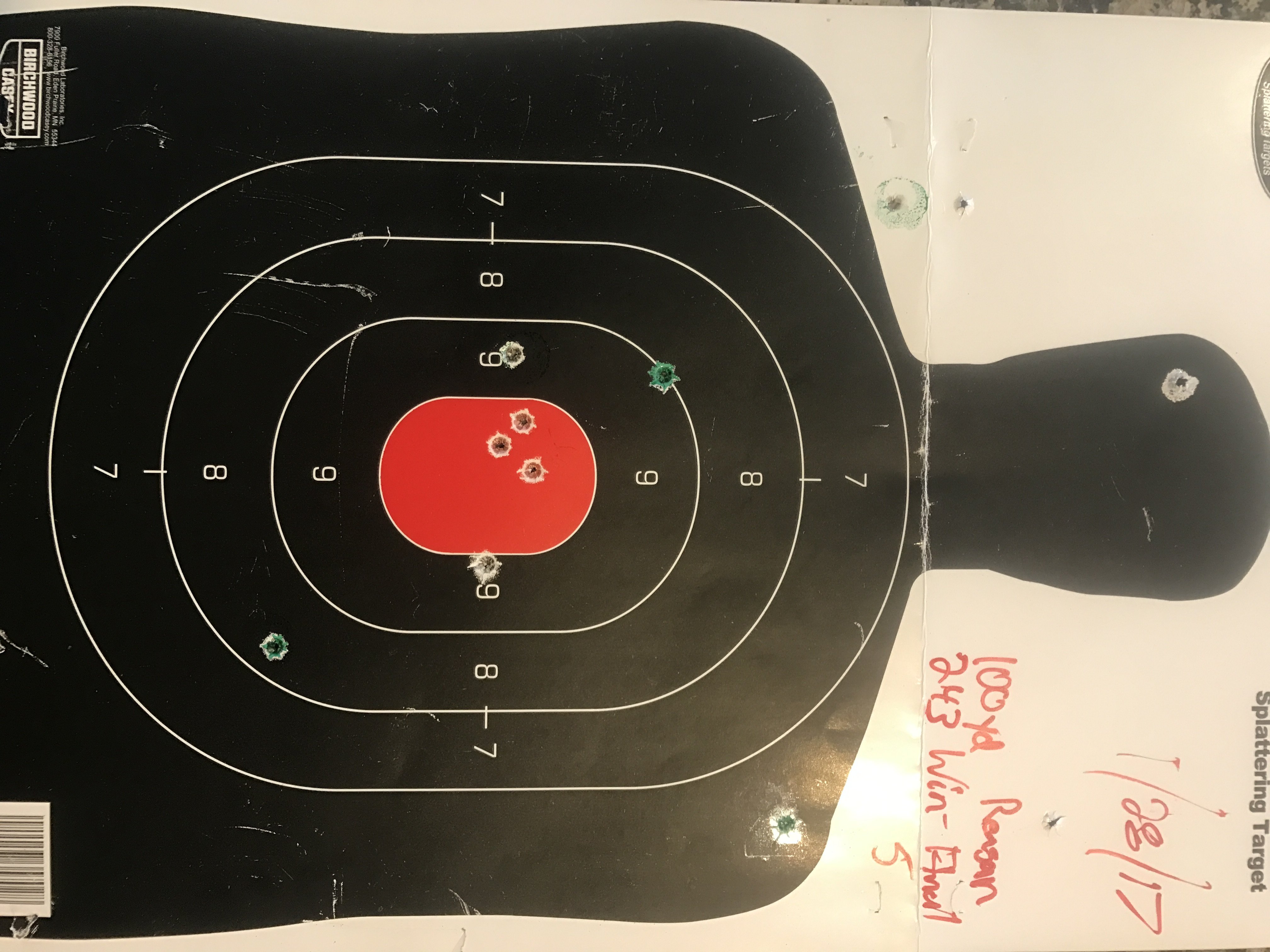 Those are great targets for any first time shooter. Knowing she is only seven makes them fantastic.

I feel the same about 6.5 x 55 Swedish Mausers as you do about the Win Mod 70 Featherweights. I decided to build one "grandkids" gun for all of the future hunters in my family. Was she shooting off sand bags or "sticks?" Several more trips to the range will boost her confidence. Given the excitement of a first hunt as a grandpa and a "seasoned" Hunter education Instructor try to make/limit her first shots on animals to 50 yds or less if at all possible.

@Shootist43 i too applaud the 6.5x55, one of the best their ever was. I want to learn more about vintage sporters made in Sweden when I have the chance. I know some are better than others and some can handle higher pressure SE loads.

Will be adhering to your instructor guidelines and keeping shots under 50 yards from a rest. A couple more range days and then we're off to hunt does in TX in less than 3 weeks!

P.s.- thank you for instructing kids. It's a thankless job but the students never forget it. I certainly remember my hunter's ed instruction and my kids loved their class. You don't appreciate the people doing it until you realize it's all volunteer, classes are impossible to find, and everyone is doing online classes instead of old fashion hands on.

The best "treatise" I've ever read on the 6.5 x 55 Swedish Mauser was written by Nathan Foster. Check out his web-site http://www.ballisticstudies.com/ Once on his website go to the "Knowledge Base" then to the 6.5 x 55. After reading his comments on a number of calibers I purchased all of his books. Throughout his writings Nathan touts the attributes of the 1896 Swedish Mauser. Currently my load for the 6.5 is 46.5 Gr of IMR 4350 pushing a 140 gr NP at 2775 fps with groups under an inch with a 24 " barrel. At one point in his writings Nathan called the 6.5 x 55 Mauser a "Hand Loaders Dream" If you were serious about checking out "vintage sporters" this is where I'd begin my search. I have a friend that shoots and wins Palma Matches. His "Vintage Sniper Rifle" is, you guessed it, an 1896 Swedish Mauser.

Re. your daughter's TX hunt, let her shoot a couple of feral hogs if you can. There are lots of them and the cost is quite reasonable. My grandkids still talk about their TX hog Hunt and the "perfect" shots they made.
S

@rookhawk congrats on your daughters success.
I

6.5x55 and 7x57 are magnum class weapons like their dad shoots. I'll start them on the .243 and they can work up to the really big stuff!

(I've hunted literally dozens of animals from Bears to Kudus to Elk with my 7x57...plenty of weapon for about anything short of Elephant...except WDM Bell used them for elephant...okay, the 7x57 is perfect for everything terrestrial living today)

Congrats on your daughter @rookhawk! Looks like she'll be a crack shot and a top notch hunter in no time.

Best of luck on the does and I second @Shootist43 regarding hogs. Many landowners in Texas will let you hunt them for free, since they are a pest. I started out hunting as an adult on hogs and other pest animals at my buddy's ranch out near Llano. Loads of fun!

I thought you and your daughter were going to TX in February so she could get some hunting experience before going to Africa. Did you go? Did I miss seeing the report? How did she do?

@Shootist43 we got home early AM Tuesday.

We had a great time! Her shots were perfect and she dropped a red hind and a whitetail over the three days of hunting.

It was a truly memorable experience and the look of joy on her face when she got her first deer was priceless!

We had kabobs, steak Diane and gourmet burgers so far. All were excellent!

Her shots were around 89 yards and 65 yards. The 243 performed flawlessly for the task at hand. She did great with her rifle.

I'd love to but I don't put pics of my kids online. We cannot predict whether a hunting act as a minor will prevent future education or employment.

Understood, but how sad that the photo of a youngster at a moment in time that she will remember forever can be potentially used against her. Brickburn is right, being PC is a rotten deal when it keeps you from sharing a photo that you would love to. Please convey my congratulations to your daughter, I'd do it in person if it were feasible. I'm sure that you understand that we as hunters would all like to share in her joy.

Plan on going through the same process with my grand daughter in about two years! You did well rookhawk!

Congrats to your daughter @rookhawk

Thanks guys. I regret I can't show you the video and photos as I'd love nothing more than to show you the care, reverence, and joy she had as she harvested her first big game animal.

Sadly, we live in a world that is becoming more punitive to hunters and nothing on the internet ever leaves the internet. In good conscience I cannot potentially cause trouble with her decades from now because I chose to boast on her behalf with hunting pictures. When she is an adult she can make her own choices with her name and reputation, for now I'm accountable.

I would like to say that Port Sullivan Ranch, Dr. Rob Lasell and their whole family were just wonderful. If you're looking for a high fence hunt to introduce a child to hunting, this is the operation to consider. I say all this with high praise as many of you know I do not personally hunt high fence or low fence environments myself. The hunting was challenging. The shots were relatively far. The game was nervous and certainly not foolish. I would really recommend them for a first hunt as it is likely you will get shooting opportunities each day. I think a 4 day hunt would be perfect for a two animal hunt.(we rushed and did our hunt in three days but did not harvest a third deer as no shot presented itself in the species we wanted)

The other observation is that the pre-64 featherweight model 70 in .243 was just perfect with lite loads. For a small amount more than a new youth gun you can get a child a "forever" gun. I saw no evidence that the .243 is not an appropriate gun at reasonable distances on large game broadside. It certainly would have handled a cow elk or a medium sized kudu as well as it handled the red hind. I had assumed it would have been a 150 yard recovery but it was not, both were DRT with a double lung shot that caused central nervous system damage during expansion. At any rate, it served her well and she was very thoughtful, taking about five minutes waiting out the right angle on the right hind before getting a perfect shot off.

Where will the family hunt in Africa? Not sure yet. It's still a year or two out, probably around August of 2018 or so. Probably Matetsi or the private grounds in the Okavonga delta, then on over to Namibia with a stop at Vic Falls. Somewhere in the Western/Southwestern Zim + Bots + Namibia areas. My daughter has her heart set on a zebra and warthog. My eldest son has been ranting about kudu since he could talk. The youngest hasn't yet expressed an opinion. So we'll definitely be doing sightseeing on the "family safari" that will include probably 4 days of "kill it and grill it" plains game hunting as part of the experience.

The reduced loads we used in .243 - Off the shelf Hornady "Lite Recoil" .243. They are about 87 grain softpoints and they go about 2400fps and they are rated for medium sized game inside of 200 yards. The rough calculation I did back of a napkin is about 6lbs of felt recoil out of the winchester featherweight .243 with the S&B optic installed.

A 6.5x55 with a muzzle brake would be a joy to shoot and would almost certainly take the on average 10lb recoil and bring it down to 7lbs of felt recoil I would imagine. (muzzle brake companies embellish and say 40% reduction so I assume 30% is probably the truth) 6.5x55 and 7x57 are so epic in their awesomeness I can hardly control myself discussing your favorite caliber. As soon as the kids are big enough to handle grown-up guns they'll shoot the latter two of mine in lieu of the .243 with the short youth stock.
You must log in or register to reply here.

G
I need some coaching, haven’t hunted South Africa since 2003
2