NAMIBIA: I'm Back From My First Safari

I just got back from my hunt with Omujeve Safaris in Namibia. It was an outstanding trip. Thanks to everyone on this forum for all of the advice that helped to ensure a great experience. I'll post details and photos later. 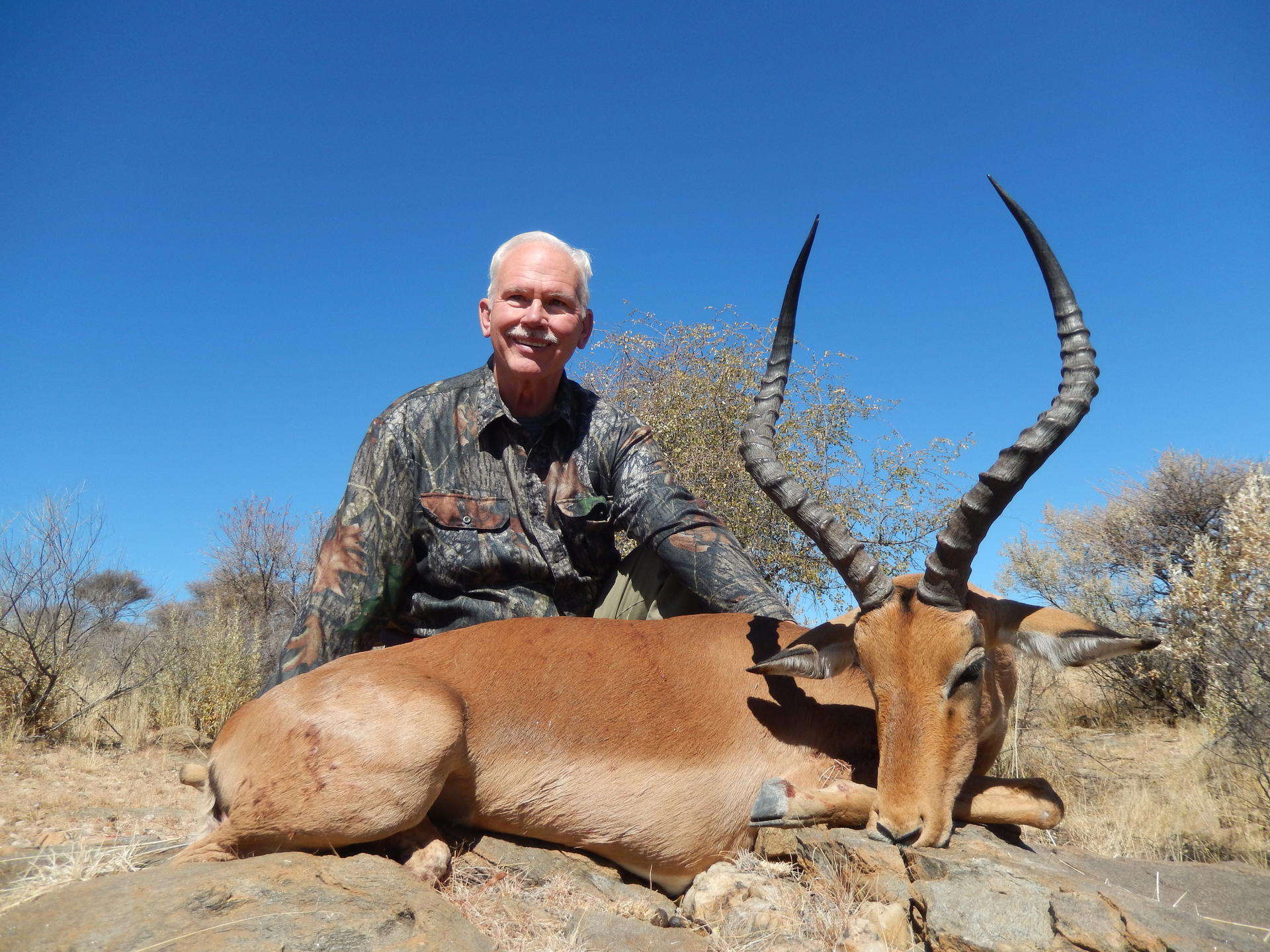 Mt Goat Glad to hear you had a great time. We'll be standing by waiting on the full report and the pics.opcorn:
Enjoy Life Now! It has an Expiration Date.

I'm sure it was a life changing hunting experience.

Looking forward to your report. I'm sure the Kruger's took great care of you.

Looking forward to the report and pictures Mtgoat!.......Man, I love this time of year...lot's of reports come rolling in. Next best thing to being there!

Should I put the pictures in the photos section or embed them in a post in this thread?

Mtgoat said:
Should I put the pictures in the photos section or embed them in a post in this thread?
Click to expand...

Feel free to do both!
Jerome Philippe, Founder of AfricaHunting.com

OK, you asked for stories and pictures. Here you go.

I hunted for 8 days with Omujeve Hunting Safaris. My PH was Louis Kotze. I can't say enough good things about my experiences with them. Everything was great. We hunted out of the main lodge and the South camp

Everything that I had read and been told was true. An unbelievable quantity and variety of game - wow!

My non-hunting wife joined me for the trip. Together we may have set a world record for the least amount of gear taken on a safari. We each had a normal, roll-aboard, carry-on suitcase. In addition, I had my briefcase with my computer. She had a small bag in which she stuffed things like her iPad, purse and who knows what else. (I used one of their guns, so I didn't have to deal with a gun case.) I even had 4 pounds of hard candy in my suitcase. We "cheated" a little by carrying our fleece jackets, but it was all within the airline rules for carry-on. Surprisingly, we managed very well with that small amount of clothing and other gear.

I had booked the trip at relatively the last minute (late February). As a result, getting flights proved to be quite difficult. I travel a lot and nearly all of my flights are on United or one of the Star Alliance partner airlines. While I could have looked into flights on other carriers, it wouldn't have made a lot of sense to do that. Also, making it difficult to make the flight arrangements is my personal rule that if I am flying over water (i.e., long international flights) I have to be in Business class. Normally, I purchase a ticket that can be upgraded with miles. However, I couldn't make that work for this trip. In the end, I used miles to get our tickets. Seats were so limited that I had to put us in First class for the Washington London segment. (For what it's worth, I do not believe that First is worth the extra cost except on Emirates.) The final routing for our trip was Denver (6:00 AM departure aargh) Washington Dulles (5 hour layover, but got to use the First class lounge much better than the United Club rooms) London Heathrow (15 hour layover that was hard, but at least we had the use of the Star Alliance First Class lounge) Joburg (another 5 hour layover) Windhoek. Coming back we had the same connections but the layovers were shorter.

When we arrived in Windhoek, we were pretty well rested, having slept for most of the time on the two long flights.

Day 1 began with me trying out the 338 Win Mag at their range. Using their gun has left me puzzled and waiting for my gunsmith to get back from his vacation so we can solve the mystery. I had no problem shooting their 338. However, I have a 338 Win Mag that is literally painful to shoot without a muzzle brake.

It was normal plains game hunting drive around and then spot and stalk. The first animal that I got to shoot was a wildebeest. I made a good shot, but it got up and ran with the rest of the herd. After a few hundred yards, it separated and headed downhill. We hurried after it. When we saw it, it was laying down. Louis set up the sticks and I shot it again. So, what does any self-respecting African antelope do when shot? It got up and walked away. By now we had the dogs and tracker. However it really wasn't necessary, since it was leaving such a substantial blood trail (even large chunks of lung). When we saw it again, I shot it one more (and final) time. IçŸ¥ told that it is better than average, but what do I know? All I can say with certainty is that it is the biggest (and only) one that Iè‡´e ever shot!

That brings me to my next problem. When I first booked my hunt I decided that I wouldn't bring anything back because my trophy room is already comfortably full. Then I started to think that I would just doing European mounts and everything. As time passed, my wife encouraged my to plan on mounting the gemsbok (if I got one) å…¸hey have such a pretty face? Then, I started thinking that it would be nice to have a kudu in there as well. But I was still thinking just two shoulder mounts. However, now I am wondering about the wildebeest. If it's as special as I was told, perhaps I should get a shoulder mount for it. Well, Iè‡´e about 6 months to ponder the question.

That sure changed for me as well. What a problem to have. I know there a solution...

The next animal that I shot was a red hartebeest. I made an apparently excellent shot on it. A single shot and drop like a ton of bricks. Louis congratulated me on making a nice one shot kill and asked if I wanted to walk back to the truck and then ride over to pick up the hartebeest. Fortunately, I opted to walk to the animal. We had just gone a few yards and it got up and ran off perhaps 40 50 yards. It stopped and I shot it again. Again, it dropped in its tracks then it got up and ran off. This time it went a lot further. The truck pulled up; we piled in and then we off to the races bouncing over the rocks and crashing through the brush. Finally it stopped. This time Louis also shot it. At that point, it had been shot 4 times it took off again. However after a short distance, it stopped and I finished it. We found that it had taken 4 shots to the chest (I don't remember where the 5th shot hit) and both front legs were broken. Unbelievable!

Next, Louis spotted a group of blesbok and we started to stalk them. However, just as he determined that there weren't any in the group big enough to shoot, he noticed the tips of a springbok's horns above the brush. He couldn't tell how big it was but he had me get on the sticks just in case. It stepped into a small clearing, stopped and looked at us (death wish?). He told me to shoot. I hit it in the near shoulder and blew a large chunk out of the other shoulder. Even so, it ran a few yards after being shot.

The surprise on this one was the scent on its back. It sure smelled a whole lot nicer than a pronghorn in rut!

My next animal was a female gemsbok. Louis led my on a great stalk. One shot was enough to kill it, although it did run with the others for about 70 80 yards.

The next day, the first stalk was for another (male) gemsbok. It seemed odd that this one was feeding by itself at the edge of a pan. It went down immediately with one shot. Although down, it kicked for awhile and I finally shot it again.

My final animal was an impala. It was a long stalk in part because they kept moving. There were baboons nearby and sometimes they would give an alarm call, which might have made the impala more wary. It went down and stayed down with a single shot.

As I started this series - I hunted for 8 days with Omujeve Hunting Safaris. My PH was Louis Kotze. I can't say enough good about my experiences with them. Everything was great.

What were the big surprises?
- Quantity and variety of game. Nothing can really prepare you for that. I had read books and articles. I watched countless hours of hunting shows (there are some good ones, but most are mediocre and some are real junk). Yet when I got there the vastness of the land and bounty of the game was surprising.

- Toughness of the animals. I was fortunate that none of my animals ran far, but in some cases it was amazing that they were able to move at all. My PH had a story of a lung shot gemsbok that they had to track for 12 hours.

What did I leave out?
- Missed shots. I had read that you can expect to miss shots in Africa and I did. Fortunately, I didn't lose any animals.

- Non-game animals. I guess that technically everything in Africa can be game. But I wasn't hunting for zebra, giraffe, jackal (although we did shoot at one), sable, roan, eland, etc. I was very lucky and got to see 2 aardvarks. After the first one, my PH told me that they are very rare. Then I say a second the next day!

- Camp details. If you want to know about those items, contact me directly.

What would I do differently?
- Take more sunscreen (I had just enough, but no extra).

- Book my flights further in advance.

- Make more concrete plans for non-hunting activities for my wife.

One more thing that I would do differently - I wouldn't wait so long to go on my first safari!
F

Good report and congratulations on many fine trophies!
You must log in or register to reply here.

M
NAMIBIA: Has Anyone Hunted With Omujeve Hunting Safaris?

R
Are email servers down in Namibia?

R
Rare Breed USMA84DAB Rare Breed wrote on USMA84DAB's profile.
Doc attached.
Sep 13, 2021 •••
E
elkhunter77 Mark Biggerstaff elkhunter77 wrote on Mark Biggerstaff's profile.
Yes, I am interested in some A Frames to load, if they are the 300 grain or other that will work for Cape Buff. I need enough to work up a load and sight in, then carry over there
Sep 13, 2021 •••
K
KKovar AfricaHunting.com KKovar wrote on AfricaHunting.com's profile.
Wow, great response regarding the title of a thread and an amazing site.
Sep 13, 2021 •••
J
Jerycmeach Bullet Safaris Jerycmeach wrote on Bullet Safaris's profile.
I am interested in hearing about your wild lion hunts.
Sep 9, 2021 •••