I am interested in hearing more on anyone who has experienced the bent triggers with the 140ae? I just bought a 140ae in 500NE last week with thoughts of a better stopping gun after a terrifying encounter here and also the thoughts of another African adventure as its been almost 10 years since I was there last.

I love the gun, it is regulated well and my first 6x shots with Hornady DGS grouped 1.5" on the bullseye at 25 yards. I noticed the front trigger was bent back as new (I should have noticed while handling it at the Calgary Shooting Center but I was nervous). I am decent with metal so I persuaded it back to a normal geometry but worry I have the weak triggers others have mentioned? Where can I get thicker and stronger ones?

Also This firearm does have the automatic safety upon breaking and loading which seems ludacris on a dangerous game rifle. Can this be disabled like on a double shot gun? Permanent modification is fine... Does anyone have instructions and removing the stock/buttpad without damaging the rifle?

Sorry to ask so much. I love the rifle and caliber, but the bent trigger and auto safety caught me off gaurd on a 10,000$ rifle (even if it's the no-name of doubles)

Some South Alberta pictures for your viewing pleasure; 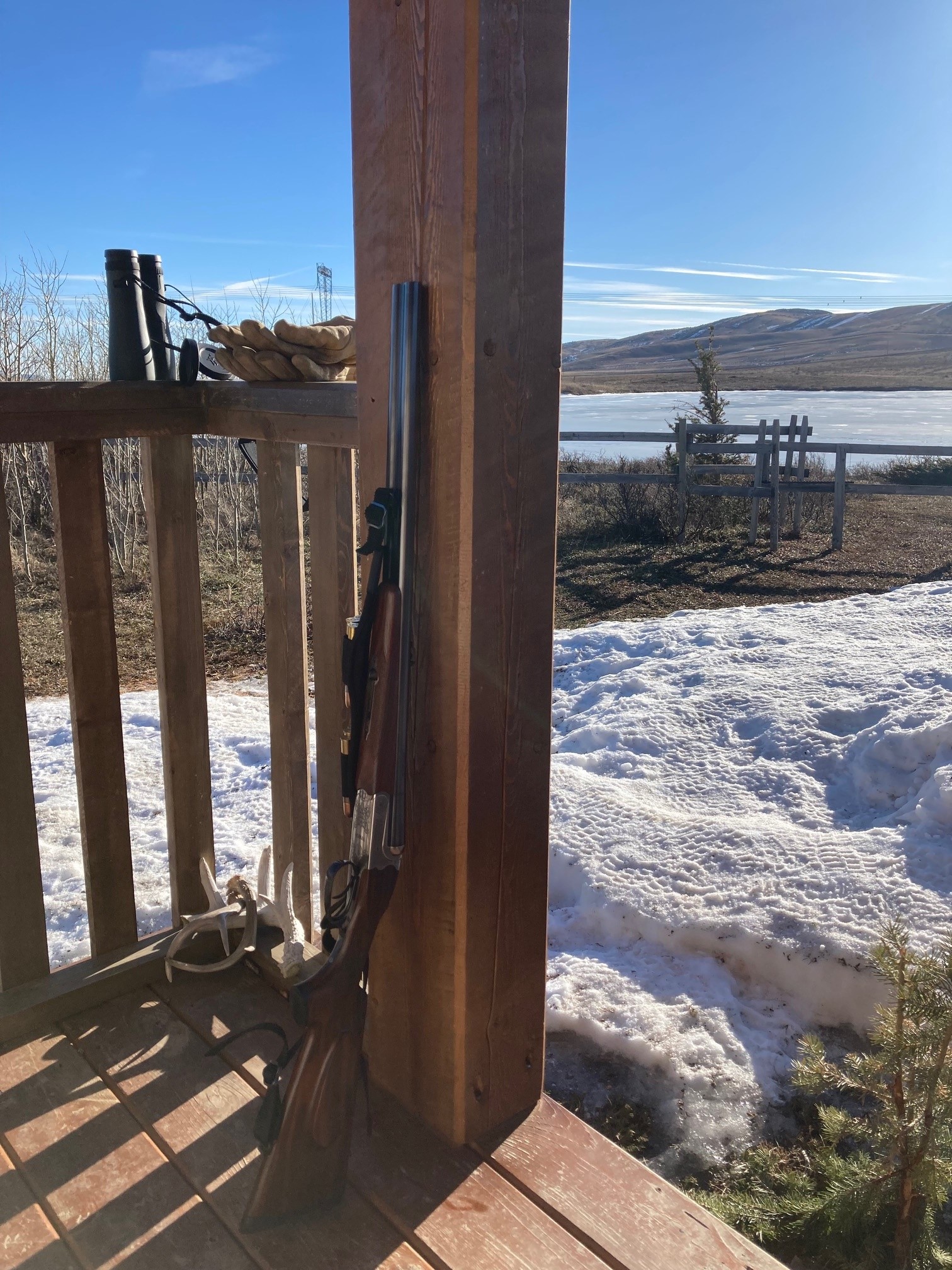 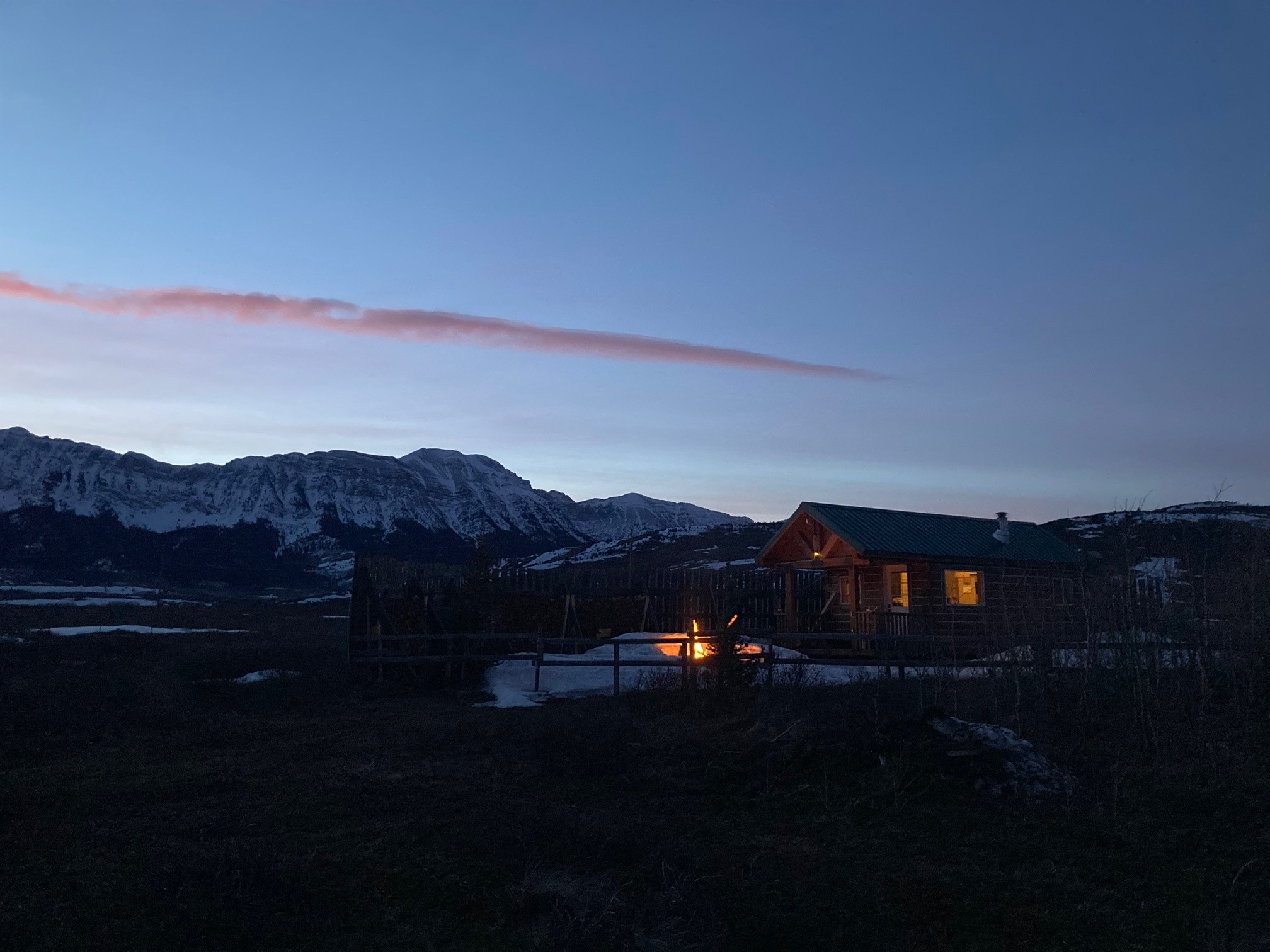 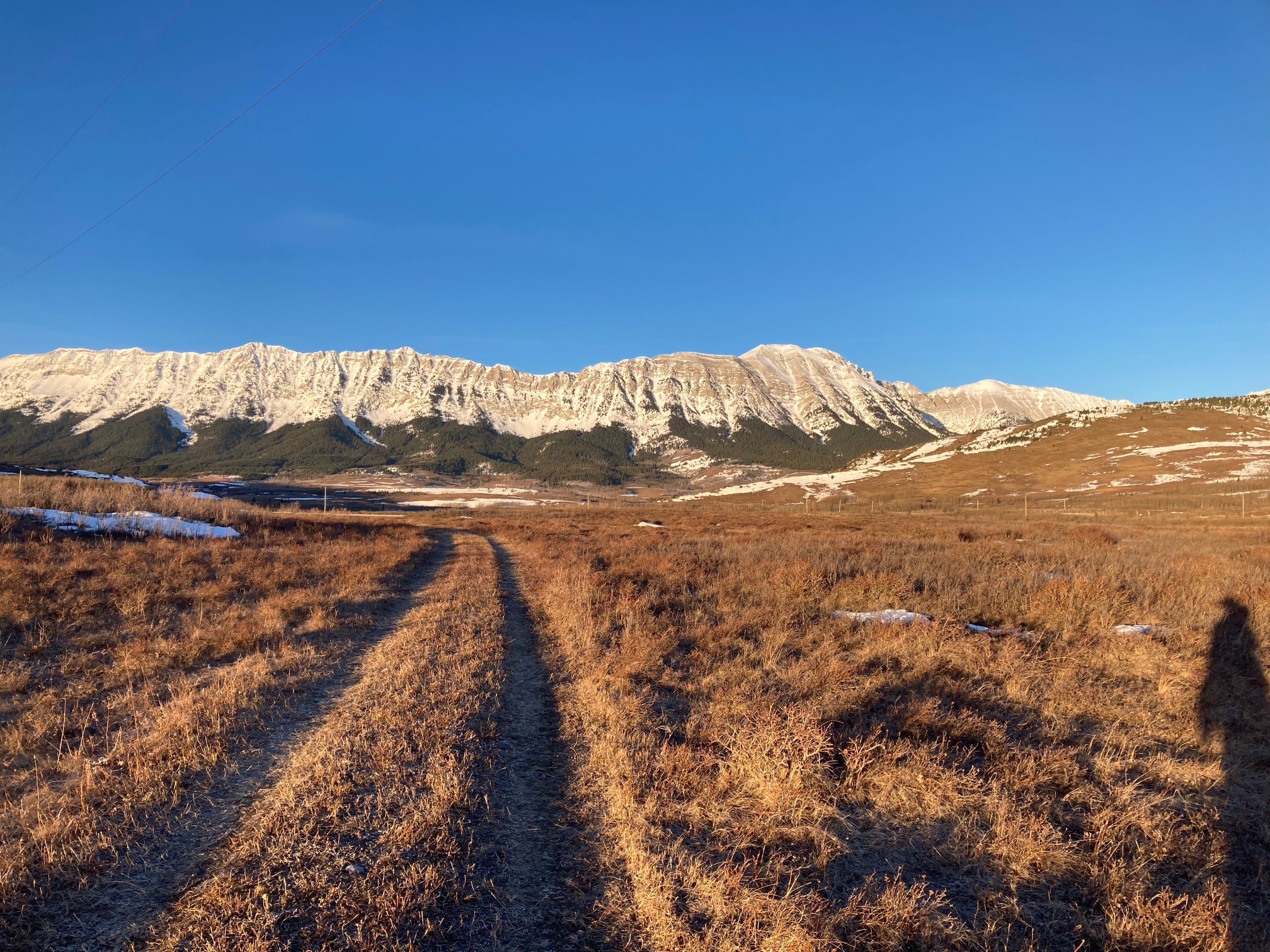 Pretty double and pretty country. I hope someone will advise upon the triggers, but please share the 'terrifying encounter', sounds most interesting.
Carruthers

Thanks Kevin As to the incident, it's embarrassing to say the least and mostly my fault.

I went fishing early on our own land 200 yards from my cabin. Like i have for 30+ years... I was being too quiet and managed to get in-between a sow grizz and its cub unknowingly in the bush. By the time I realized I wasn't alone I was being aggressively charged from 20-30' and I had no time to react and just thought "this is it" and took one step and (blushes) literally passed out.... yep, fainting goat like I assume... I have no memory from that step to rolling over.

When I came too (seconds?) the Sow was pawing the ground and roaring 5' from my legs. I squirmed through the thick willow brush and she decided not to kill me I guess (felt sorry for mr. light head?)

Anyways.... I realized that it happened so quick anything but a shouldered and loaded firearm would be useless. And a double is the only chance for two shots. It was just sooo fast. It also was a great excuse to buy a double... : )

I won't lie, its a security blanket also. I have been quite jumpy in the bush here since but refuse to stop going.
J

I believe that is a fair reaction.
S

Do you have a picture of your triggers before and after you bent them? I will attach picture from three of my Merkels, a 147E 12 ga, a 9.3x74 and a .470 NE, all of them have pretty much the same shape. They were made between 2000 - 2006. The 12 ga and the 9.3x74 have automatic safeties, the .470 does not. I've owned quite a few Merkels and shot them a lot, never experienced triggers bending or had a doubling problem. 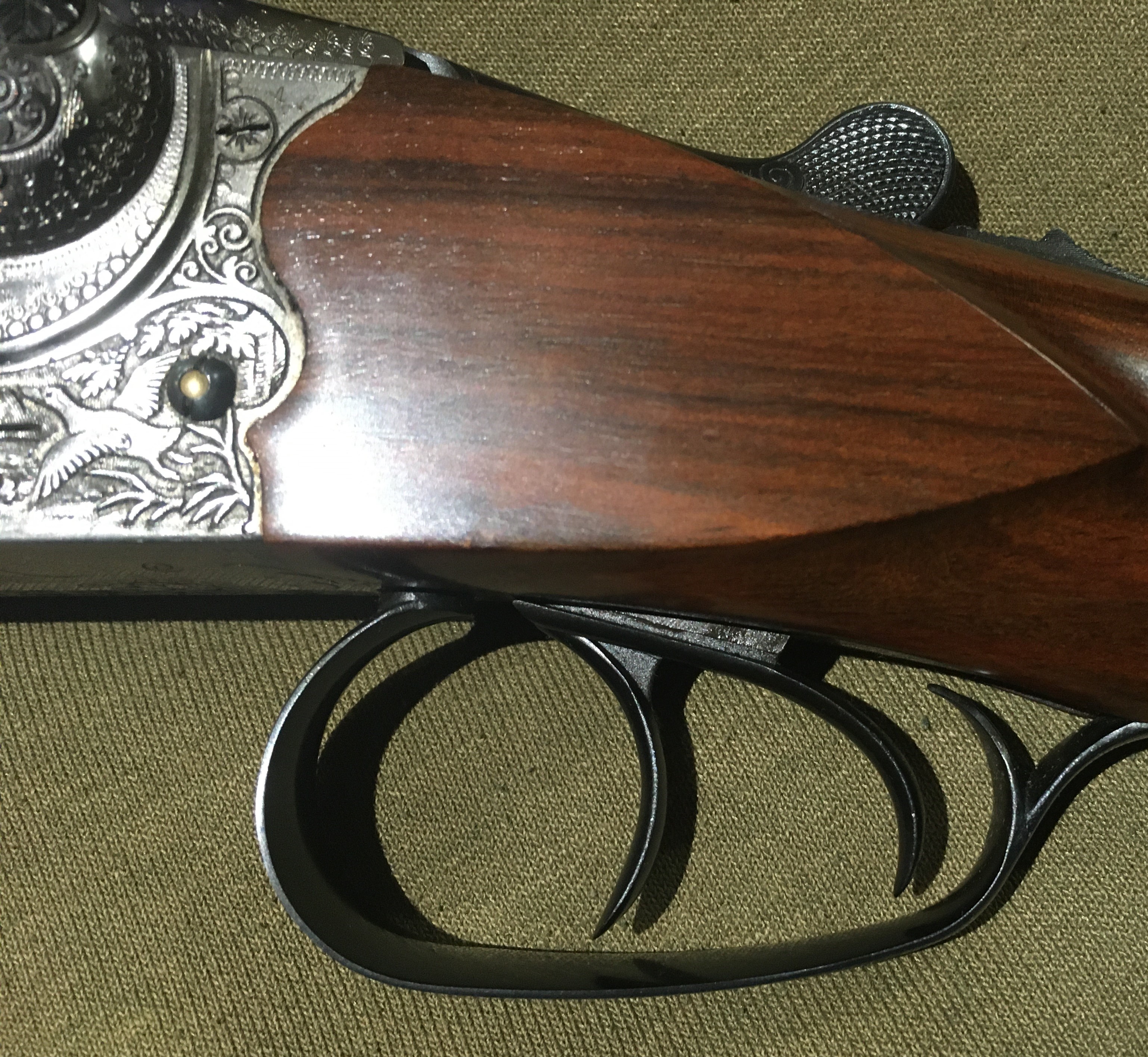 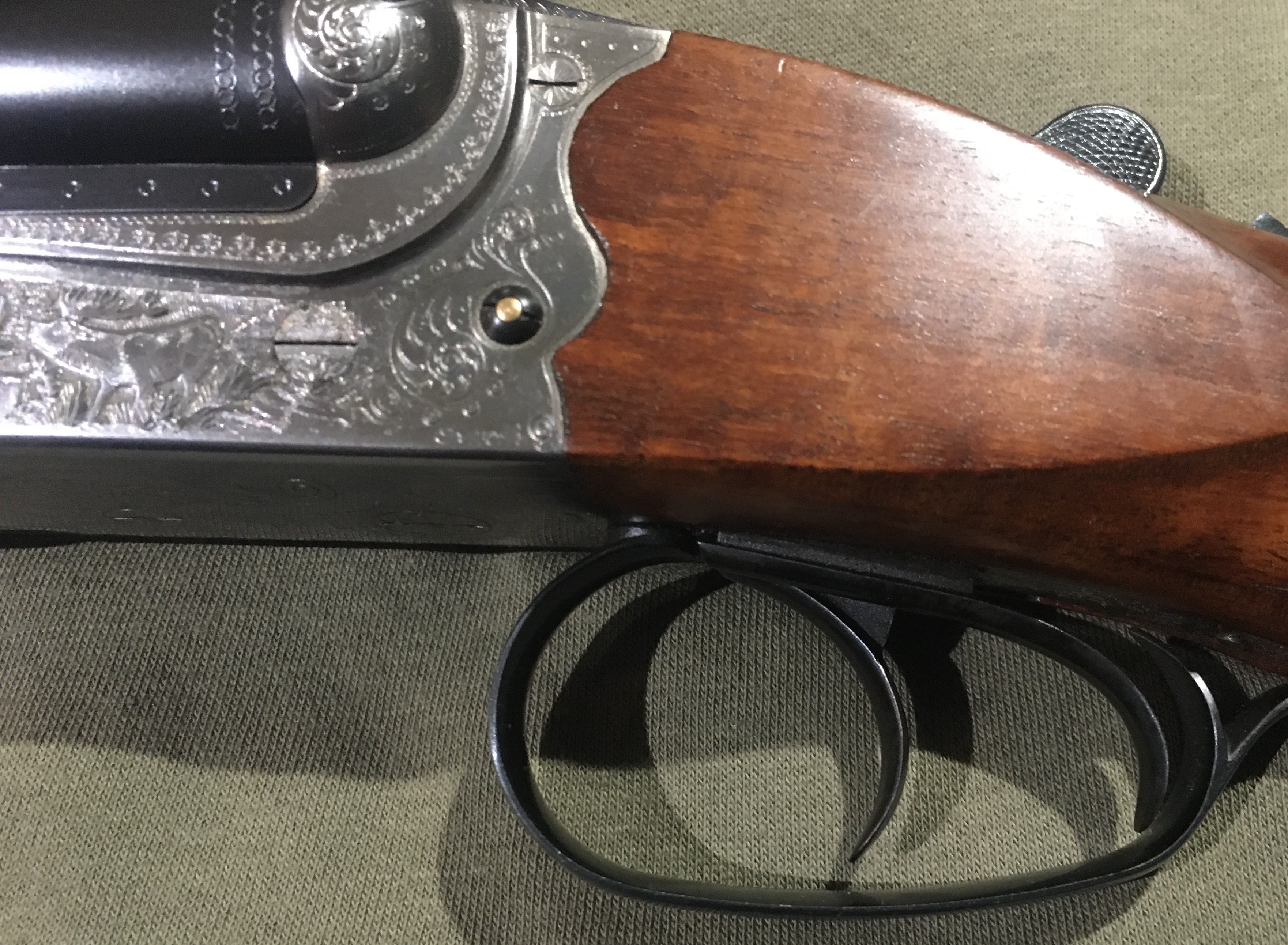 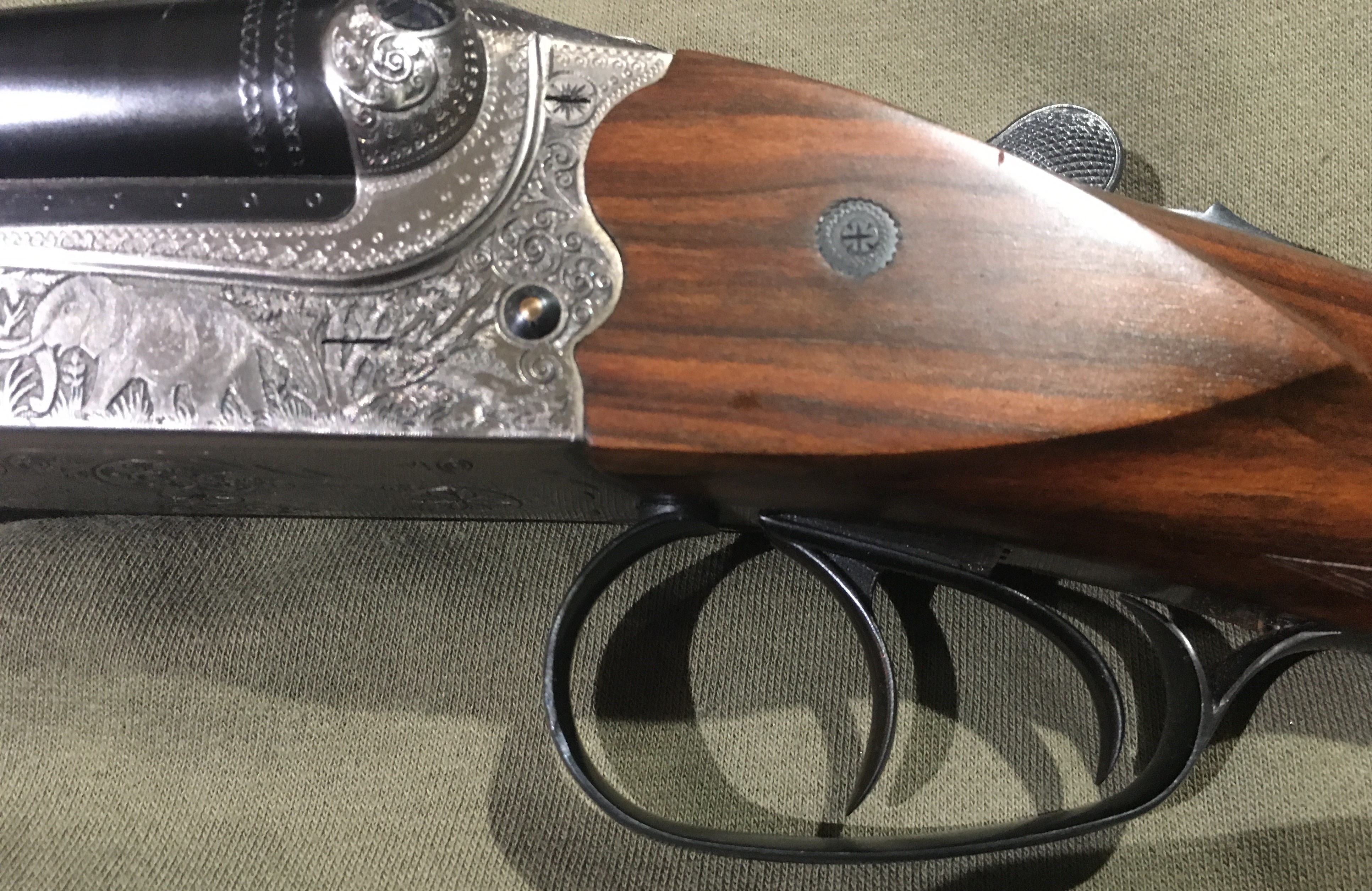 Managed to find the photos of my Merkel 140AE in 500N.E
Rifle was in for a new front bead when the gunsmith noticed the problem.
This was just the start of the failure. As I mentioned in the other thread, on the other rifle that was sold, the triggers bent so far over time that it eventually caused a double discharge. 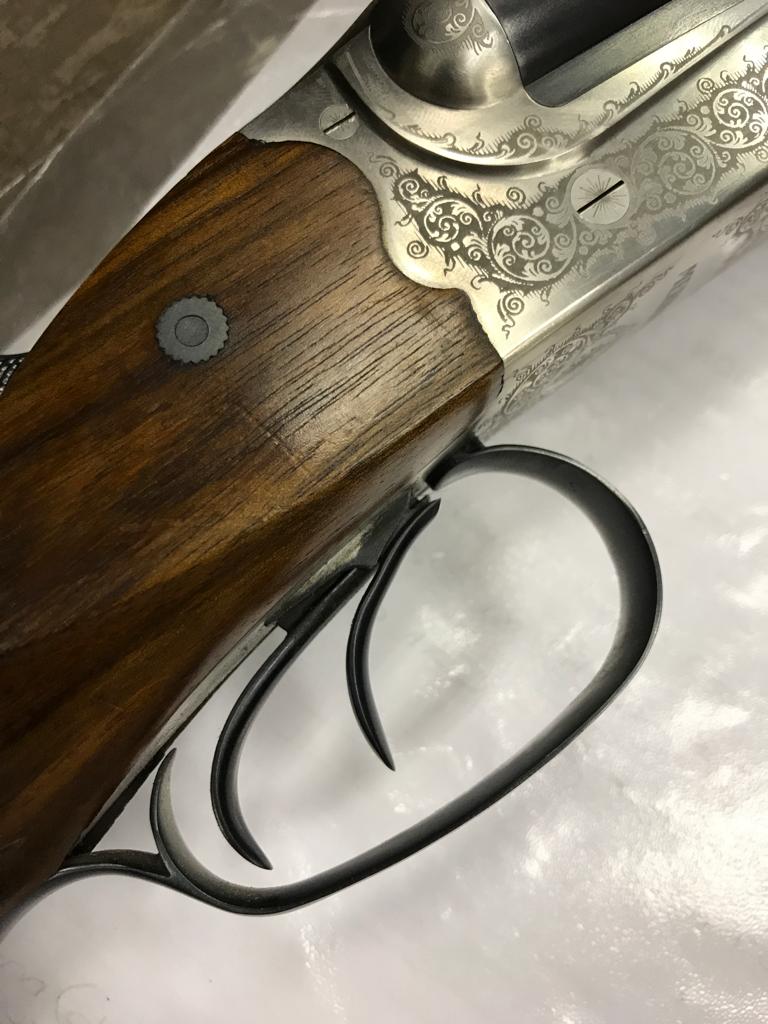 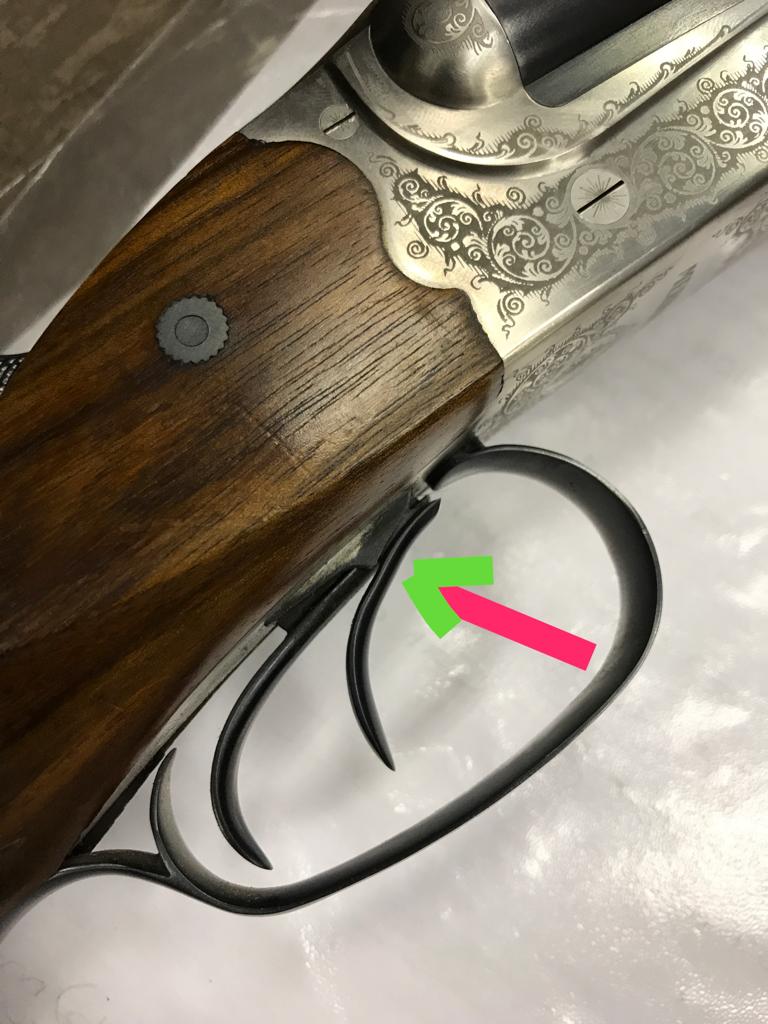 I believe you said the Merkel was new or else I would say that someone else had a hair raising experience and after the reload they forgot about the auto safety.

Go out and hunt coyotes with your double, run the caller right next to you so they come to you and get some practice.

Ain't nothing going to help you if you're passed out, so get out and thin out the local yote population and get some experience stopping charges.

Perfect stress relief, you can make rugs, blankets, hats, gloves, whatever from the fur if you wish, sell it even.

But most of all, just see about getting some confidence in pounding brain shots in charging things, my 458 lott is my coyote rig, and my 500 S&W comes along as well.

Maybe hunt black bear in a similar fashion next year, spot and stalk with some calling to finish it the last bit of distance. Hoping to be out trying to call one in next year myself, if I can draw a tag.

On most SxS shotguns the trigger spoons are maleable and can be carefully bent (or slightly twisted) to the desired position. The auto safety cocking rod can be removed to disable the auto safety. I believe that a DR can be done in the same way.

This is all very interesting. I did spend some time on the triggers to straighten them out, before they were similar or worse the KMG Safari's. I assume in the store it was handled by many for years as it had a thick layer of dust on it, and I assume many attempted to pull the triggers on saftey, 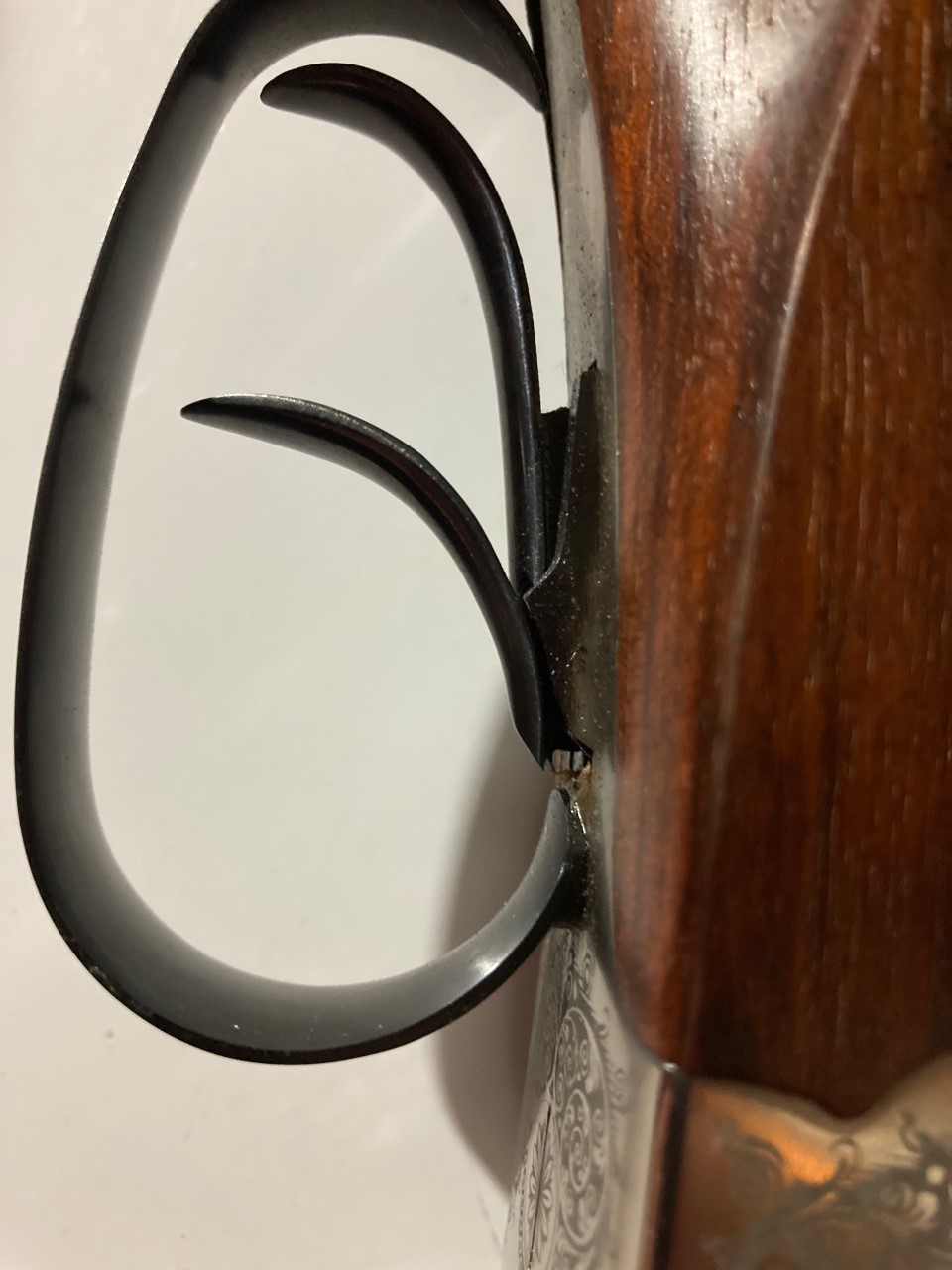 That's very interesting about the malleable triggers on double shotguns as these did seem way to easy to bend back into place but they are strongly magnetic so likely just mild steel?? (which means I can tig weld them and build them up worst case)

As to the auto saftey, I ordered the correct set of sharp gunsmithing flat blades and after watching this video feel I will attempt to open her up and disable this feature. I have built my own 260 ai, and 50 alaskan so I am not too shy on internals


Now as to bear and my ability to react... haha harder to solve. I actually don't feel too bad, Just trust me, this was not a normal encounter. I shouldn't be typing this and likely conking out saved me in reality. When I told my hunting buddy who saw the seen (helped me retrieve my fishing gear) I had no memory from my one right step to rolling over in the bush he sent me this and I assumed I did the same.


I hunt coyotes all the time with my lil’ 17hmr and distress calls on this same property, I have chased black bears off from camps with only a stick or rocks… I have come into relatively close but not overly aggressive contact with wolf’s, cougars, rhino, elephant, one lion and many grizzly’s dozens of times…. Haha this was not an normal encounter. It was a surprise and very aggressive charge, my only weapon was my fishing pole, but it really wouldn’t have mattered….. There was no time to react even if I was armed unless I was shouldered and safety off. I have never seen a animal move like this. I have no way to really describe what this was like… completely unlike anything I ever imagined it would be or experienced before with these creatures. I had absolutely no choice in my survival and was 100% aware of it. The bear chose not to kill me, that’s as simple as it was. While I was taking a nap. haha

It was not a fear as much as a helpless feeling, Imagine waking up suddenly from a peaceful sleep and you're on the highway with a semi-truck 1 second away from running you over. “this is it”

Oh I also submitted a warranty claim through the Merkel importer in Canada (Wolverine supplies) who are great, but I doubt they will get much back from Merkel.
S

WOW, thanks for posting pics of the bent triggers, I've never seen that with a Merkel before, unbelievable. It had to have been a batch of improperly treated metal.

Is it just me or should a $13,000 DG gun have triggers that bend? I could imagine some hunting scenarios where they would get bent flat! Does this happen often?

Philip Glass said:
Is it just me or should a $13,000 DG gun have triggers that bend? I could imagine some hunting scenarios where they would get bent flat! Does this happen often?
Click to expand...

Couldn't you heat-treat them? Heat them up with a torch, drench with oil?

Should cure their willingness to bend, go too far and they could shatter but I can't imagine this is actually a concern here, you aren't using the triggers to hammer and you'd really have to over heat-treat it.

Then perhaps save the TIG welder for worst case scenario that has you needing to weld on new trigger "hooks."

KMG Hunting Safaris said:
Managed to find the photos of my Merkel 140AE in 500N.E
Rifle was in for a new front bead when the gunsmith noticed the problem.
This was just the start of the failure. As I mentioned in the other thread, on the other rifle that was sold, the triggers bent so far over time that it eventually caused a double discharge.

Think you need to lay off with the weights

Unfortunately i believe these are mild steel.

Due to its low carbon, mild Steel is typically more malleable, machinable, and weldable than other steels. However, it also means it is almost impossible to harden through heat treatment.

Stompbox said:
Do you have a picture of your triggers before and after you bent them? I will attach picture from three of my Merkels, a 147E 12 ga, a 9.3x74 and a .470 NE, all of them have pretty much the same shape. They were made between 2000 - 2006. The 12 ga and the 9.3x74 have automatic safeties, the .470 does not. I've owned quite a few Merkels and shot them a lot, never experienced triggers bending or had a doubling problem.

Does this have the articulating front trigger? I believe KMG’s does as does mine…. and they look to be unsupported and poor design compared to this trigger that is supported by the rear webbing… hmm
S

P-J said:
Does this have the articulating front trigger? I believe KMG’s does as does mine…. and they look to be unsupported and poor design compared to this trigger that is supported by the rear webbing… hmm
Click to expand...

my .470 does not have a front articulating trigger

Might be difficult to see on the photos, but there is a distinct difference in the quality of the original to the replaced triggers.
What they look like now: 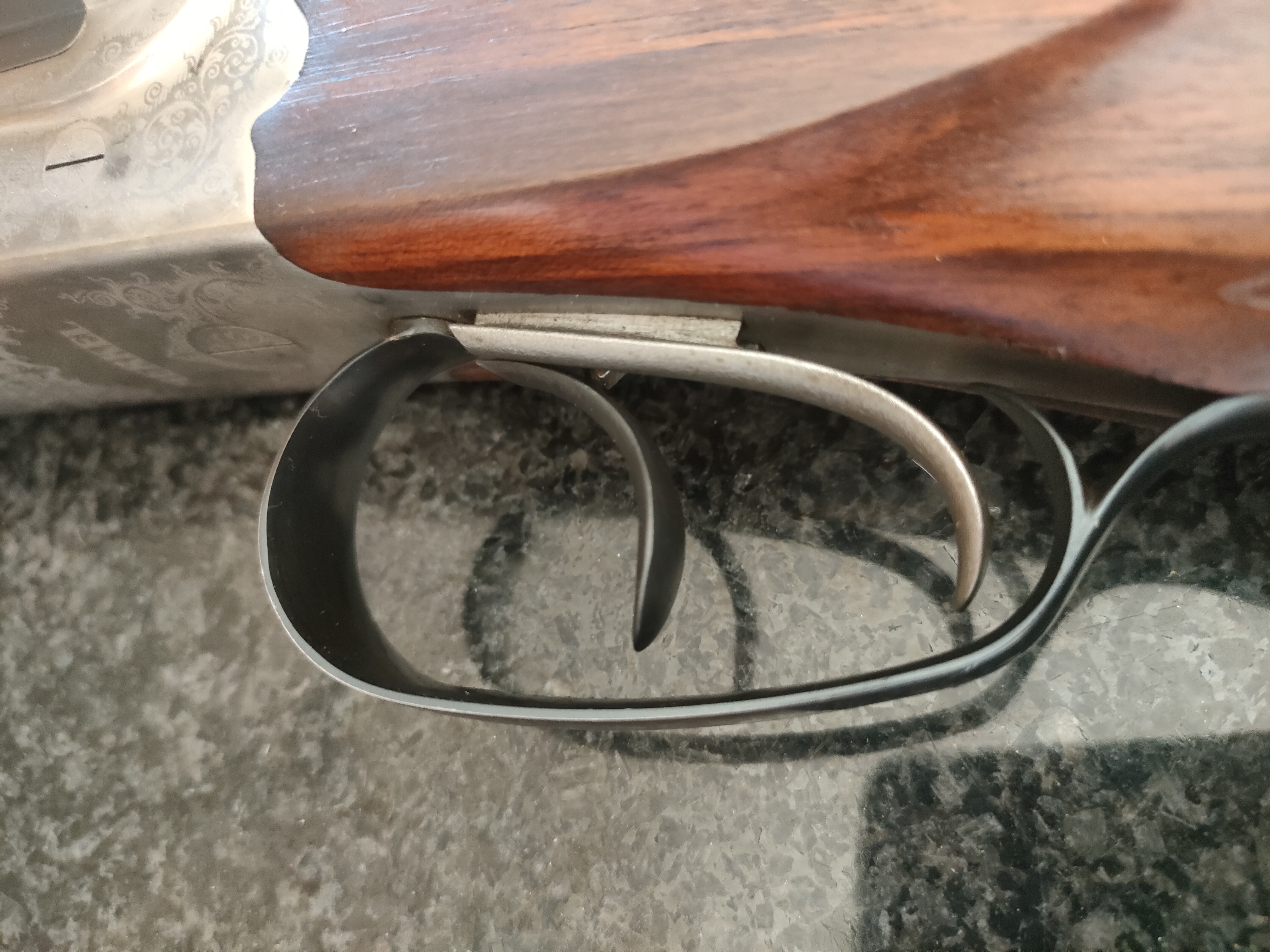 RMR sight on my Merkel
2

H
hunt 65 James Adamson hunt 65 wrote on James Adamson's profile.
what is the asking price for gun and ammo?? thanks.
Monday at 4:20 PM •••
G
Gerry Addison AfricaHunting.com Gerry Addison wrote on AfricaHunting.com's profile.
I would like to delete my last post on the the thread where to hunt big cape buffalo. I haven't been to that area for a few years and it may be very different now. Not fair of me to post this.
Friday at 7:53 AM •••
J
jpallister
Montana hunter and avid sportsman.
Jan 31, 2023 •••