Euro mounts- Am I smoking the devils lettuce?

VertigoBE said:
Gorgeous house and trophies @Red Leg ! Must be great to go perusing through all those memories and souvenirs on a daily basis!
Click to expand...

@Red Leg, It must be quite a task to clean the man cave. LOL!!!!!! Gorgeous place, and beautifully decorated. Congrats sir!!!
C

The advantage of Euromounts is you can group a lot of them in a relatively small area. Luckily I have 22 foot ceilings in my living room.

I prefer Euro mounts too. Yes, I had shoulder mounts of my two SCI bronze buff but hanging those beasties was a chore. Now that it looks like we are moving, I am really not looking fwd to taking them down, crating them, hauling them and re-installing them. Ugh.

friendswoodmatt said:
I like euros — I like the simplicity of it - I like that I dont need to deal with their hide or hair getting dust and cobwebs in it. But this’d past weekend— my neighbors came over and we’d were looking at the whitetail I have taken on this ranch (all euros) and all four of them said— a 161 needs to be shoulder mounted on a low fence ranch in the hill country- thats a trophy— kill another buck with a good cape and make it happen. ‘’I was floored” I love my euros— I dont like waiting 1-2 years for a mount to come home —and I guess I am probabaly leery of when my Dad passed — he had many mounts and they were a PITA to deal with in fact— I didnt deal with them— I had no money and no space to deal with them then and he didnt leave me any to help with CHORE.
Euros mounts in my oppinion as much easier to deal with , smaller, take less space, still offer the memories of the hunt. I dont care about scores— I hunt what I like. Am I alone ? Do I do an animal a disservice if I dont shoulder or pedestal mount it? On the upcoming hunt— I will shoulder the kudus, the buff may be shoulder maybe pedestal and the the sable will def be a pedestal — the eland will be euro, warthog - euro, zebra-skin and others will be euro— nyala— undecided — bush buck as well — impala— euro — gemsbok euro — i will have the skins tanned and the meat will be used— Am I missing something — do you feel like one animal is deserving of a shoulder over another? Plains game mostly — I guess I hold the big 5/6 in different regard. But that being said — I’d euro a buffalo if I liked the plaque or the buff was a second or other reasons ... — I surely would— others outside of Leopard— I have no interest in— I think cats deserve a full body — they are special— but I dont want any of them currently . Am I out of my mind? Sorry about run on sentences and punctuation — I are an Aggie.
Click to expand...

I prefer euros for whitetail. Everyone has whitetail shoulder mounts. I notice few visitors take notice of them but they do notice the euros. 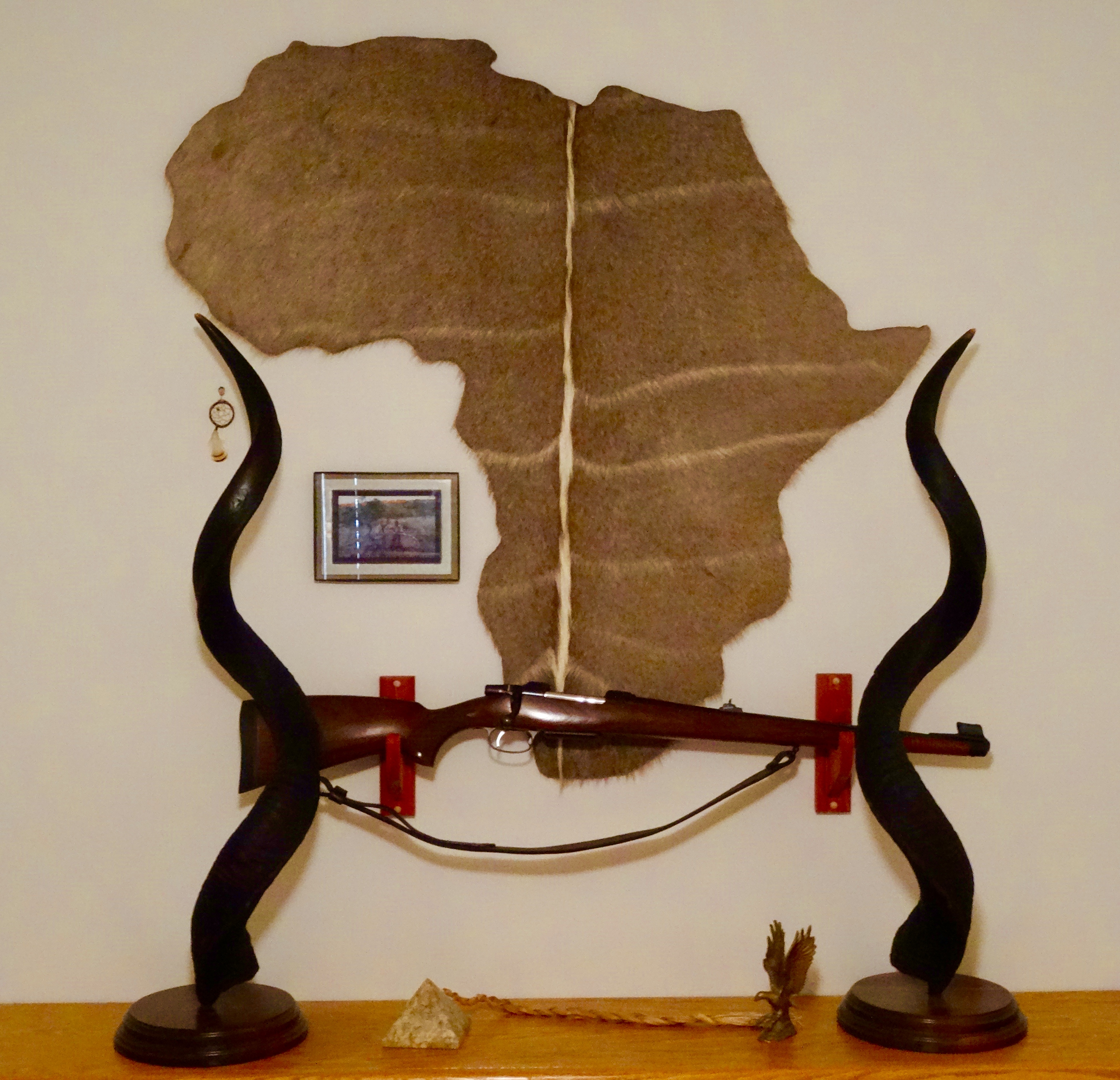 Last edited by a moderator: Mar 21, 2021
Be Yourself Everyone Else Is Taken

Rob404 said:
I Chose a pedestal because I had the right spot for it
Click to expand...

I really like the idea of the skin in the form of Africa as well!

chashardy said:
The advantage of Euromounts is you can group a lot of them in a relatively small area. Luckily I have 22 foot ceilings in my living room.
Click to expand...

That is breathtaking, and I think the room and cost savings is enough to go again.

Red Leg said:
Thanks much. The previous owners had run their business from the carriage house. We gutted it and turned it into the Trophy Room, guest house, and gentlemen / ladies' bar. It is a good place to spend time over a single malt.
Click to expand...

Where did you find that old India travel poster?

When I was single I had several photo and advertisement prints from the movie Hatari framed and hanging on the wall and a couple of other period African movies.

They were striking, but damaged on our move from Australia to the US in 2013.

Like the mix of trophy photos, skulls, art and taxidermy.

I have a collection of Persian carpets for later when we have a place to show them off again. Right now we are living in a rental looking for a property to build on.

Goal is to have a room off the garage with high back burgandy leather chairs, skulls, taxidermy, art and a reloading room and hunting storage room set up for pre-chip convenience.

Where did you find that old India travel poster?

When I was single I had several photo and advertisement prints from the movie Hatari framed and hanging on the wall and a couple of other period African movies.

They were striking, but damaged on our move from Australia to the US in 2013.

Like the mix of trophy photos, skulls, art and taxidermy.

I have a collection of Persian carpets for later when we have a place to show them off again. Right now we are living in a rental looking for a property to build on.

Goal is to have a room off the garage with high back burgandy leather chairs, skulls, taxidermy, art and a reloading room and hunting storage room set up for pre-chip convenience.
Click to expand...

Came out of a UK auction. Not many bidders due to the "horrific" subject matter (hunting tiger from an elephant).

Fortunately, we have hardwood floors throughout. They are perfect for our Eastern carpets.
"We sleep soundly in our beds because rough men stand ready in the night to visit violence on those who would do us harm" American Novelist - W. Churchill

"The past is a foreign country, they do things differently there." L.P. Hartley
T

WebleyGreene455 said:
I love the way German castles and Schloesser look with rack after rack of antlers and skulls all over the walls, and how some of the British manors did the same during Victoria & Albert's time.
Click to expand...

I have euro mounts for my European animals for precisely the same reason; it just looks right to me. I would probably make an exception for something like a chamois, should I ever take one of those. My North American animals are a mix of shoulder mounts (mostly) and a very few euros.

Having never seriously contemplated an African plains game safari until the last several years, I hadn't spent a lot of time considering what to do with those mounts. Likely will do a shoulder plaque for zebra and gemsbok. Currently thinking euro-style tusk mount for warthog. Kudu could go either way. Of course there is still the little matter of successfully taking them first...

Fortunately there is a high ceiling in part of the house, courtesy of a remodel some years ago. It was specifically done to allow hanging trophy mounts (although again, Africa was not a consideration at that time).

So OP, do what makes YOU comfortable, and what makes sense in terms of your budget, preferences, and the layout of your house.
"You can still smell the roses, while you're running with them in your hand..." -- Slim Dusty
T

rookhawk said:
There are other options beyond euro mount too. I like antlers/horns with the skull cap, covered in leather, suede, or tweed and then mounted to a plaque. They look very distinctive and women tend to like them quite a bit. I’m not personally a fan of bleached skulls so this is yet another alternative.
Click to expand...

I've seen some as you describe with the leather or suede covering, but never tweed. Trying to visualize how that would look; but it sounds very distinctive.
"You can still smell the roses, while you're running with them in your hand..." -- Slim Dusty

Your comments prompted me to share these pics. The Zebra works perfectly with a curved wall that is unfriendly to pictures. I just recently said to my wife that I was thinking that if I am successful on Eland later this year, I would get pedestals for the sides of the fireplace and voila', there they are your Kudu horns for me to show her. The Chamois was taken in southern Germany in the 90's and fits in well with the Steenbok and I hope to add a Duiker to the mix this year. 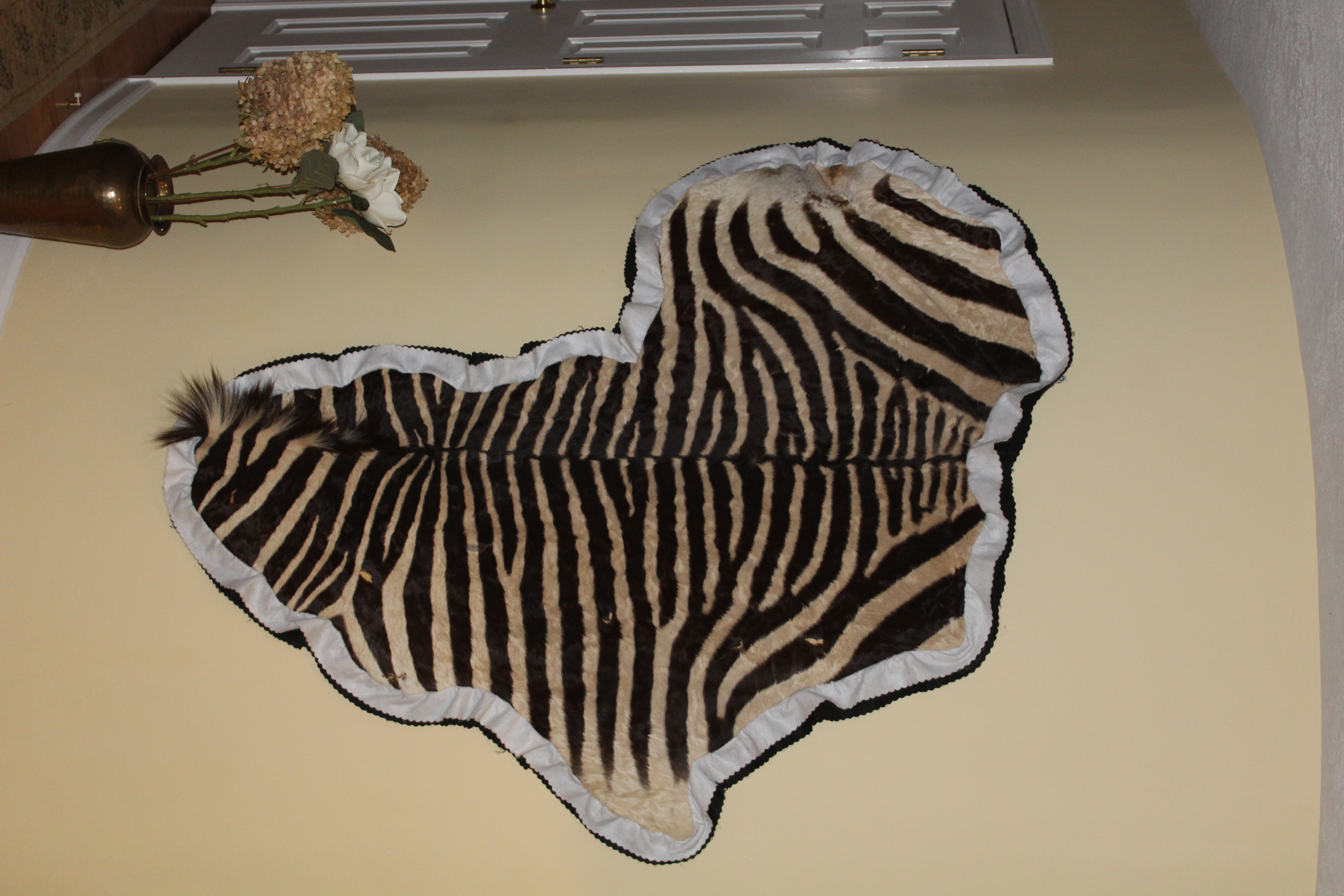 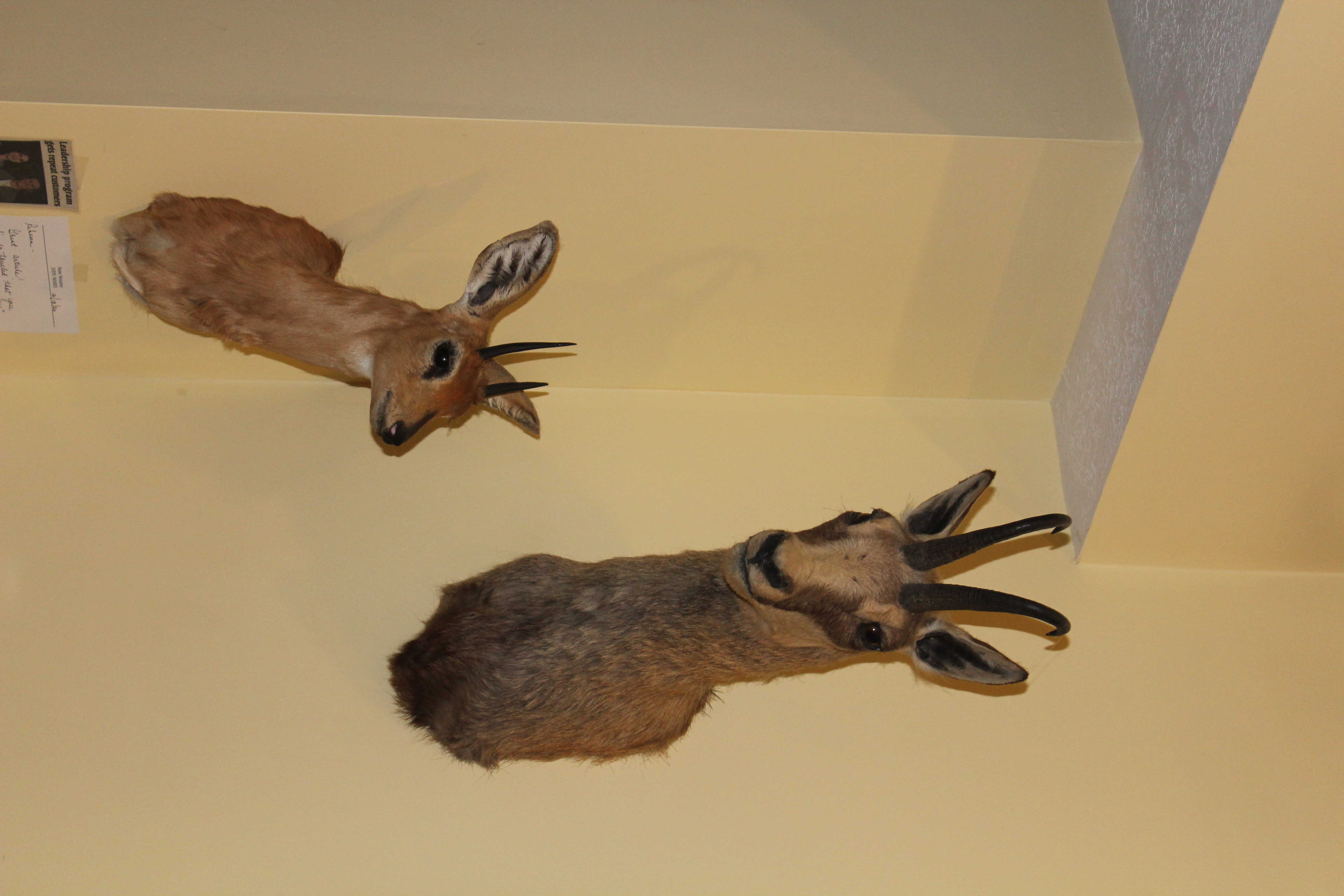 Those are very nice! Thanks for posting, it's helpful to have good ideas to consider.
"You can still smell the roses, while you're running with them in your hand..." -- Slim Dusty
You must log in or register to reply here.

Trophies what to keep
2 3