i'v read in a book that sable where very aggressive and that they could charge.
does any one heard stories about charging sable or was charge by a sable

I dont know about Sable but I had a wounded Nyala try to have a go at me. If his back wasnt already broken Im sure he would have left the country long before it came to that but when he couldnt get away and I got too close he arched his horns at me, bellowed like a Cape Buffalo and tried to come at me.
Bushbuck are known to be mean little bastards when cornered so I am sure there are many others out there with a mean streak when conditions are right.
Why we hunt, even lions? Real hunters need thriving wildlife, so we help make it happen. - Olivia Nalos Opre

These pictures are from a PH friend of mine in the East Cape. His client wounded a bushbuck and they sent "Jackson" on the blood trail after him. As with all Jack Russell's, Jackson is fearless. Before they could get in to finish him off, Jackson had him cornered. When they emerged into the opening the bushbuck came at them with Jackson attached as shown. Jackson was giving him hell even as they shot and killed the bushbuck. To keep him from bleeding to death, they cut the bushbuck's head off and left it attached to Jackson until they could get to the vet 3 hours away. Jackson still hunts to this day and is still "fearless". Never underestimate the "will to live" of any animal, especially a bushbuck! 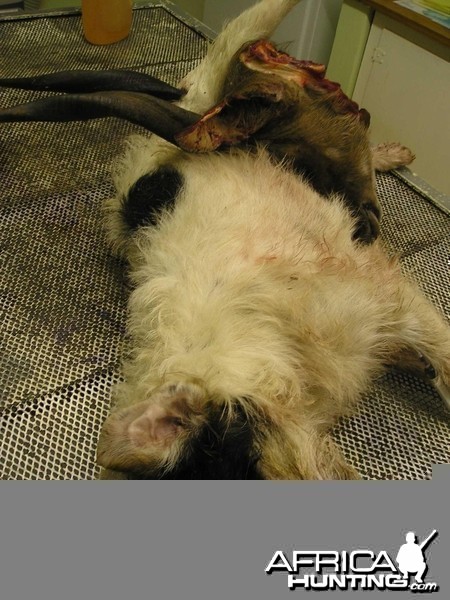 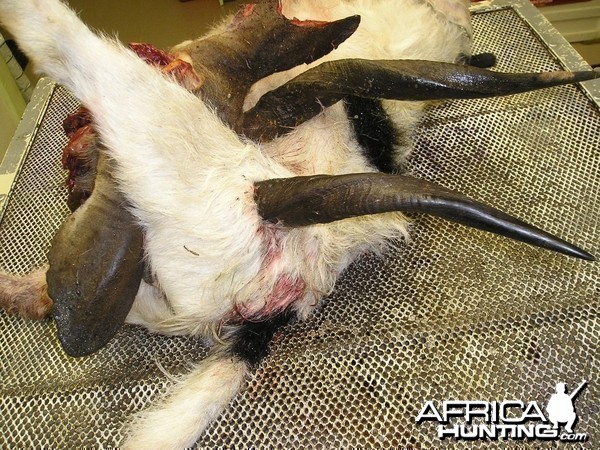 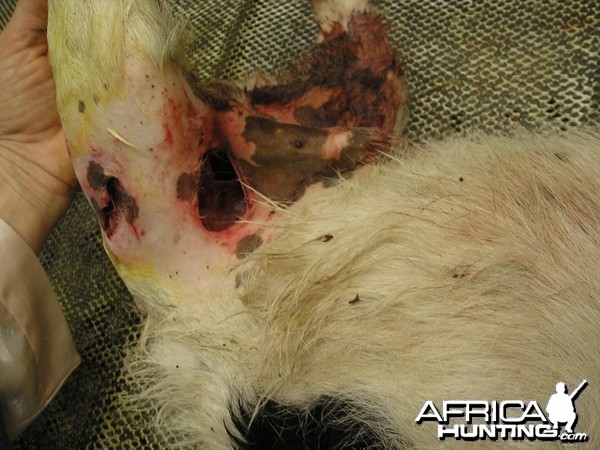 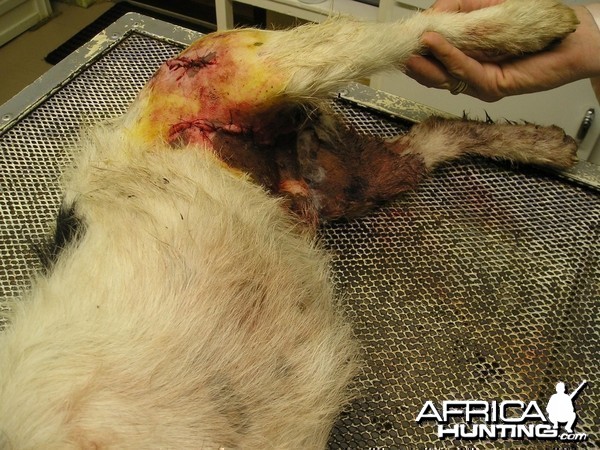 Buff-Buster said:
Jackson still hunts to this day and is still "fearless".
Click to expand...

Thanks for sharing these images and story with us Buff-Buster and glad to hear that Jackson is still at it! These Jack Russells are so special. 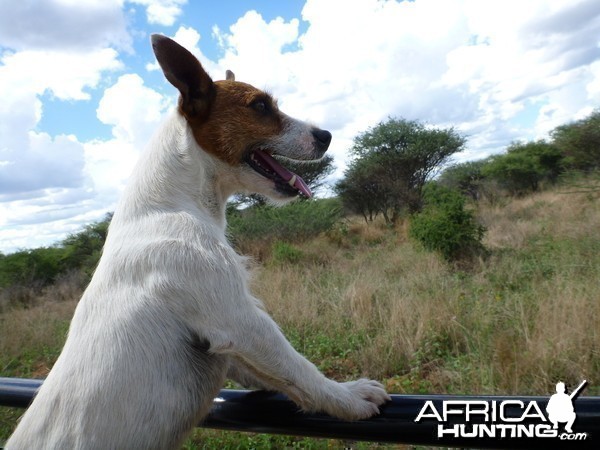 No problem Jerome! They are a fantastic breed!

The outcome was better, but before the bushbuck incident, Jackson had a wounded waterbuck of mine cornered in a water hole. The waterbuck was up to his belly, fighing Jackson as Jackson swam around him trying to get to his "nut sack"!! We got there and finished him off before any damage was done!

Buff-Buster said:
No problem Jerome! They are a fantastic breed!

The outcome was better, but before the bushbuck incident, Jackson had a wounded waterbuck of mine cornered in a water hole. The waterbuck was up to his belly, fighing Jackson as Jackson swam around him trying to get to his "nut sack"!! We got there and finished him off before any damage was done!
Click to expand...

LOL, The smaller they are the bigger they think they are!
Why we hunt, even lions? Real hunters need thriving wildlife, so we help make it happen. - Olivia Nalos Opre

A lot of my German hunting buddies used jack russel terriers to blood trail and locate boar. I thought they were kidding the first time they turned the "tiny" pack loose on a fresh boar track. Sure enough the little guys were all over a keiler in the thick, swinging from esar and other appendages like a troop of spider monkeys. Even the dachsunds love to get into it with the big pigs!

They are something else. I saw one in Germany track down a Roe deer that was wounded. Not a pig but a great working dog. In SA we had to pull my ph's jack Gruno off my warthog who hadn't quite died yet. Then my dad wounded a bushbuck. He was gone after it but managed to keep its distance so they could finish it off. The bushbuck and jack's are fearless!

In Craig Boddington's book Tracks Across Africa he shares about one of his more humbling moments where he shot a Bushbuck. The shot placement was poor and the Bushbuck made it into some thick stuff. They sent in a Jack Russell that also was impaled by one of the horns through the abdomen. Craig went in behind him and dispatched the Bushbuck, but the damage was already done.

The poor dog was still alive and Craig picked up him and started out of the brush. The dog obviously in a lot of pain and foul mood laid his teeth into Craig's face. As only he can tell the story, Craig wrote he felt so bad for the dog he just let the dog keep his bite. The story makes one feel sorry for the dog, but I couldn't help but get a chuckle from that mental image.

I met up with Craig at DSC this year and let him know how much I enjoyed the book but that particular story too. He immediately pointed to the scars on his face. Like the JRT above that dog survived to hunt another day. Little dogs with awfully big hearts! Gotta love that.

Oryx are better known for letting blood if not careful around wounded ones. Jamy Traut related to me how one killed a friend of his when they approached it on the ground. There were several people present and the one guy got too close before they knew for sure it was dead, one flip of the head, the guy turned and took a few steps and fell over dead pierced thru the heart. Any animal can be dangerous when wounded.

Here is from the book "A field Guide to the Animal Tracks of Southern Africa" by Louis Liebenberg...

Other antelopes
Apart from the Buffalo, other antelopes that can be dangerous under certain circumstances include the Black Wildebeest, Blue Wildebeest, Tsessebe, Roan, Gemsbok, Eland and Bushbuck.
While usually inoffensive in the wilds, Black and Blue Wildebeest may become aggressive and dangerous in captivity. When cornered, they will defend themselves courageously.
Roan, Sable and Gemsbok can be aggressive and dangerous or cornered. They will charge when approached too closely. Their sharp horns can cause serious injuries, and Gemsbok may even spear to death large predators, dogs or humans.
Jerome Philippe, Founder of AfricaHunting.com

Here is a full taxidermy mount representing a typical Gemsbok posture during a fight with another Gemsbok... I have seen on a few occasions this exact same posture on wounded Gemsbok getting back up at incredible speed after laying on the ground presumably dead. Sometimes they will sort of get up in this fashion stumbling really fast not really knowing where they are heading. 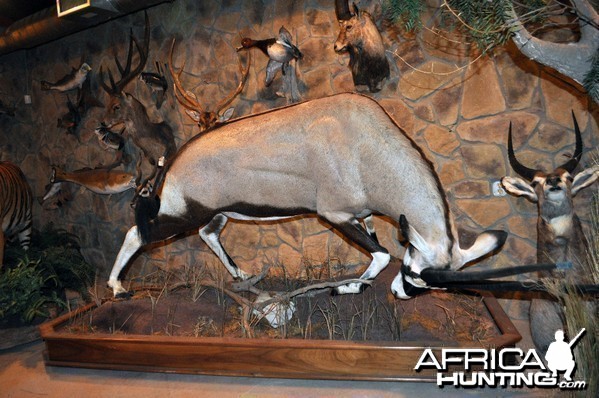 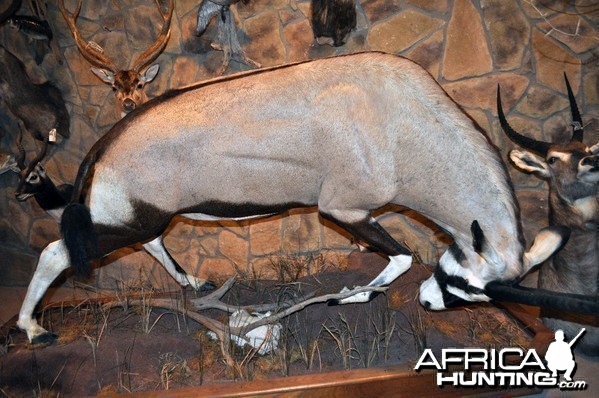 Good topic, I think I am unlucky when it comes to charges, ....for the sake of the conversation on plains game, (not only antelope) these include Wildebeest, Waterbuck, bushbuck and even had a run in with a Zebra, Nothing like trying to get away from a stripped donkey coming at you with an open mouth, the first thought that came to mind on the disco donkey was to give it a good rugby Hand off (when trying to avoid a tackle in rugby by shafting it with your palm in the face!!!) But on looking back and seeing the open mouth I decide against that course of action!!!!!

Luckily the sucker ran out of steam at the point of contact must admit my clients bullet helped with that. I think one thing to remember is that they are all wild animals and when confronted (like Humans) with no way out you never know what they will do... It does make it interesting though.....

Looks like the thread got a bit unraveled here! About Sable specifically. Whilst I have never encountered a sable charge nor heard of one in the PH world, I can tell you they very tenacious and FAST! They fight with great enthusiasm over territory and inflict deadly wounds on each other. I have a client wound one with a bow once. It moved off and then just stood, head down. we waited 30 minutes or so and got down from the stand and approached. It turned to face us. I told the client to put his next arrow straight into the base of the throat...we had no other choice. The arrow doing about 240fps was caught on his horn and flicked away. it shattered as carbon does. Unbelieving, I told him to try again...exactly the same result! I was then forced to put it down with a rifle. On inspection of the horns, the cuts from the broadhead impact on them was clear as day! On another occasion years before, we had Sable in a Boma and would stand on the railing and try to hit them on the head with pebbles...they batted them away every time! But the arrows did surprise me! I have no doubt that an injured sable would protect himself if you approached him close enough, but wouldn't willfully attack!

Sorry Balle! unraveled? it said charging Antelope....Okay I mentioned Zebra, I know Werner van Noordwyk got charged by a Sable in Zambia last year check out his promo footage.

I appologise for going of the subject, .....

I have never experienced a charging wild animal myself, but one year I leased some hunting land where I hunted Moose, Red deer and Roe deer.
The brother of the owner got attacked by a Roe buck in the rut and the buck hit him in one of his buttocks when he tried to get away.
He got a 2 1/2" deep wound and had to get some stitches at the hospital.

I could tell you something about fearless Dachshunds too, but that would be to much off topic
O

Relax Jaco boet!!! The first question posed was about Sable...so I just picked up on that!
I think everyone learned a bit about everything which is all good! I would never have thought to leave the BB horns through my dog I must say! But training stands to reason that I should!!!
You never need to apologise on a forum unless you are knowingly rude!!!!!
T