crs said:
I do my pressure testing with the Pressure Trace II product:
https://www.shootingsoftware.com/mm5/merchant.mvc?Screen=CTGY&Store_Code=RSI&Category_Code=PT
Click to expand...

Thank You... Wow! Had no idea this level of pressure transduction/curve-capture was available for such a reasonably decent price. Clearly, the development of safe, Hi-Velocity loads are now both doable and documentable. I'm a physicist, mathematician and been using physics and proprietary, derived equations to estimate chamber pressure. It will be fun to see what portions of the pressure curve I've been predicting, or not! And, visually see the effects of so-called Fast, Medium and Slow powders.

Since I have an Oehler 35P Proof Chronograph, looks like I only need the:
PressureTrace II & Shooting Lab Software Bundle for ~$680. Again, Thanx.

Go for it Bill.

Small world - I am a mathematician / physicist / computer guy - RETIRED ! Blame it on UT Austin and the early space program. It was fun, but retirement and hunting are better.

crs said:
Go for it Bill.

Small world - I am a mathematician / physicist / computer guy - RETIRED ! Blame it on UT Austin and the early space program. It was fun, but retirement and hunting are better.

Zzzzzz...
When we both wake up, looks like we have some rag-chewing ahead
T

There used to be a mildly improved Wild West Wildcat that you could shoot 45-70 in, if you had to. Seems to have been withdrawn. They now have a slightly lengthened one.

Tam,
Thank you for the link to the Rifle Magazine article.
I am familiar with the WW .457 Magnum as I researched the 45-70 class of cartridges before buying my Miroku made Winchester 1886 .45-90.
In fact, I have this article on file in my .45-90 binder. It was good to read it again though.
CRS, NRA Patron Member, DRSS, DWWC, TSRA, Whittington Center,
Android Ballistics App athttp://www.xplat.net/

If you have access to handloader magazine there is an issue that has a title in it about the 45 70 in Africa? Something to that effect, I think there is a cape buffalo on the cover. There is load data from Springfield pressure up to 42,500. I believe that's max Marlin psi, wrote by Brian Pierce. For me it's about the holy grail. I am a 45 70 fan and use his data at 28,000 psi. 405 gr cast from an Accurate mold at 1765 fps. I am not home to get the issue number but it's worth having. I'm not sure if the bullet weight in the data goes above 420- 430 gr for jacketed and cast. With my alloy through wet phone books soaked for about an hour, so relatively hard media. At 110 yards I penetrated 22 inches with one round and 23 or 24 inches with the other round. For what it's worth elk go down fast.
T

That was the August September 2007 issue, here is the cover:

"I used Starline cases and CCI primers along with Accurate2015 powder. My load was 55.0grs (1 grain below Pearce's max charge) and a Laser cast 405gr. bullet. This was a compressed load, which made me uneasy from the start, but the Marlin seemed to handle it. But the recoil was something you have to experience to believe!!!!"

The Brian Pierce loads did seem to raise some eyebrows, and it may be worth googling some of the threads on them for context. There have also been a lot of different Marlins out there over the years, so you may want to make sure they are safe in given 45-70s. Modern 1886s are pretty strong though

I wonder if the 457 works a bit like a Lott in that you can shoot 45-70, or the slightly longer cartridges in there?

WOW! Two trips down memory lane.
I remember the Levergun issue of Rifle/Reloader Magazine as I was then hand loading my .357 M19 and M1892 . I still have and shoot both of those on occasion, but no longer hand load for them.
I was a fan of Bill Jordan and still have his book, No Second Place Winner.

Though I did not subscribe to the Rifle/Reloader magazines, I did follow them and buy issues of interest. Lots of good information in them.
CRS, NRA Patron Member, DRSS, DWWC, TSRA, Whittington Center,
Android Ballistics App athttp://www.xplat.net/

Wow! I must ask spiders to leave my 45/70 topped w a fixed 4x Leupold. You have inspired me to use again. Thank you and the data are great in that you did testing.
I am now going to use the 300 grain bucket to test on hogs.
I used 500 grain lead alloy Bullets years ago.
Thanks for this article. I appreciate it.

The exit hole in a mule deer at about 50 yards. This was the alloy used after my bullet testing into the wet phone books. Depending on the day I can shoot 2"- 4.5" groups at 200 yards off the bench. 1/16 gold bead and a Brockmans receiver sight. Furthest shot at game so far was 155 yards prone off my pack at a bull elk. I messed around with 500 gr bullets but I'm happy with these. I took an elk about 40 yards in the lungs chambered another round got back on him and he fell. Same alloy as in the picture. The bullet has a .33 meplat, slight expansion but 45 cal holes work well. 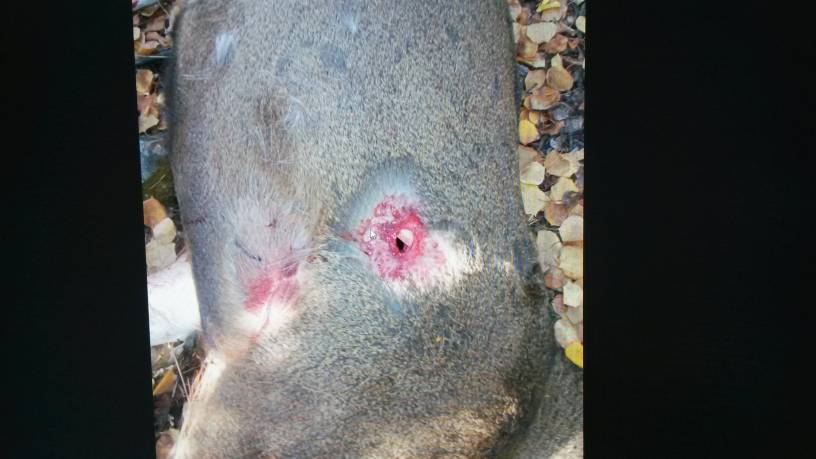 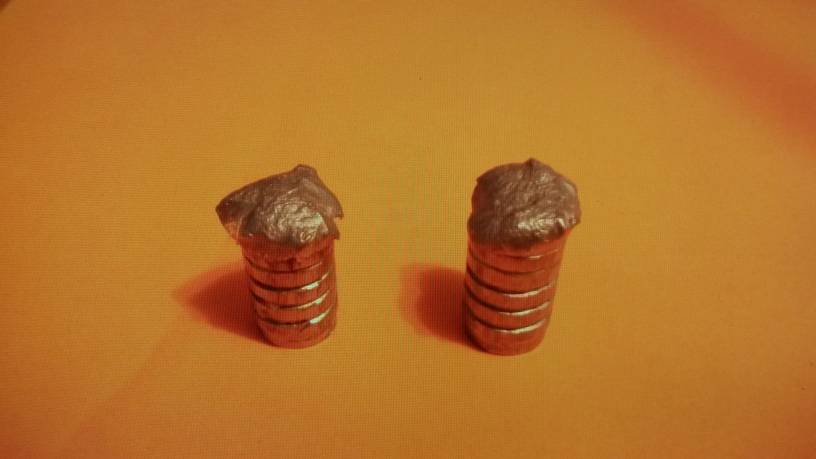 JJ,
To quote a fellow shooter on Leverguns.com, "them .45 bullets sure do make a big hole".
The factory 300 grain .45-70 hunting ammo runs 1800 fps or better and with the right bullets will take just about all NA critters.
On a guided hunt here in Texas, I shot a "management" buck at a feeder at 110 yards with my 45-90 using Winchester Supreme 45-70 ammo with Nosler Protected Point bullets.
From the elevated blind, I could see the bloody matter stream out the off side of the buck and knew it was a goner. While I was having a cooling drink at the lodge, my guide dropped the buck off at the cleaning shed and returned to tell me how much fun that was; It seems the skinner saw the 2 inch entry wound and commented on the large exit wound - my guide turned the deer around and showed the skinner the real 4 inch exit wound. It seems the shot broke 2 ribs going in and 4 going out and took a great deal of mushed internal organic matter out with it!
Yep, them .45s do leave big holes in a critter.
CRS, NRA Patron Member, DRSS, DWWC, TSRA, Whittington Center,
Android Ballistics App athttp://www.xplat.net/

Dr. Ray,
Two friends up near Fort McQuarrie, shoot a lot of hogs with their Winchester 1895 .405 rifles.
They have been stateside a few times and we always have good exotic game outings in south Texas. Elk and hogs are exotics in Texas.

So, take that 45-70 out and blast some hogs. I shot three boars two weeks back and it improved my spirits a bit - good breakfast sausage too.
CRS, NRA Patron Member, DRSS, DWWC, TSRA, Whittington Center,
Android Ballistics App athttp://www.xplat.net/

I received a very good answer from Crusty Deary Ol Coot on the Marlin Firearms Forum... and, powder choice as well as Starting Load are both part of his response.

Any load that's safe in a Trap Door Springfield will also be safe in my Marlin 1895. And, yes, safe load data for a Jacketed bullet will also be a safe load for a cast bullet (of the same weight)!

So, my question is solved:
What is a safe 450gr. Starting Load... that's larger than a (dangerous) Reduced Load?

Bill,
You seem to be on the right track.
As I type, looking at an old Lyman manual, it looks like for cast bullets of 450 grains and 3031 powder, a safe starting load should be around 42.4 grains.
I had to approximate that from 3031 loads for cast bullets of 385 and 482 for a Winchester 1886.
Please let me know what you come up with.
PS , buying those manuals is a very good idea and a good start in loading references.
PS2 - If you end up with a compressed charge, consider using Federal Magnum Match primers to light off the powder train.
CRS, NRA Patron Member, DRSS, DWWC, TSRA, Whittington Center,
Android Ballistics App athttp://www.xplat.net/

crs>
I've got several manuals (Hornady, Speer, Sierra, ...) from my 280Rem, 22-250 and 45ACP daze. Never bought Lyman cause never used Cast bullets. But, acccording to people on the Marlin forum, there are many 45-70 Trap Door Springfield loads and the 450gr ones are simply there for the picking! Should be able to pick-up the Lyman manual and 4th Cast Bullet Handbook this week.

I've got several manuals (Hornady, Speer, Sierra, ...) from my 280Rem, 22-250 and 45ACP daze. Never bought Lyman cause never used Cast bullets. But, acccording to people on the Marlin forum, there are many 45-70 Trap Door Springfield loads and the 450gr ones are simply there for the picking! Should be able to pick-up the Lyman manual and 4th Cast Bullet Handbook this week.

And, regarding Trap Door Springfield loads, as stated before, their MAX Loads could be a SAFE Starting Load for my 1895DRC!

One last thing I will add. I wouldn't use Buffalo Bore's or Double Tap's, or any of those boutique manufacturers velocities as completely doable for the handloader... sometimes they are. But all too often, Buffalo Bore and other manufacturers have access to canister powders or powders not available to reloaders which can be tailored to specific characteristics of a specific cartridge. The powders available to us are designed to be as versatile as reasonable and that is why they are jack-of-all-trades, master-of-none. So you may be able to get close but don't be discouraged if you can't match Buffalo Bore's ballistics. Plus, as mention before in this thread. even at 1,700 fps these bullets will effectively take any game in North America and any plains game in Africa!
"I am not a good shot, but I shoot often" - Theodore Roosevelt
You must log in or register to reply here.
Share:
Facebook Twitter Reddit Pinterest Tumblr WhatsApp Email Share Link