Had a great hunt in the Omay this July. Here are some of the details.

This is a quick rundown. Am hoping to get some stories published out of this hunt so I won't go into huge detail (exclusivity issues). But, had a blast. Theo was great to work with from start to finish as was Martin. Theo helped me plan the hunt since August of last year. He presented many options and I chose Martin's outfit as the best fit for what I was after.

I achieved the hunting goals (ele/buff/hyena) and even took the hyena in daylight. My PH, Dalton Tink, was amazing. We hunted very hard and he was a good guy to spend a few weeks in the bush with. He was extremely knowledgeable and competent and had zero quit in him. In other words: my kind of PH. I abhor dicking around camp around lunch time and in the early afternoon until the primary trophies are in the salt. This didn't happen. We hunted hard. It took five days to get the primary trophies. During that time I never saw the camp in daylight. The pace slowed after that, but that was fine as my list included just a klippy and grysbok. We did some fishing, saw quite a few klippys but couldn't identify sex in time.

The Omay is a wonderful and wild place. The game is there, but you must find it. On this 12 day hunt I got what I was after other than some pygmy antelopes that I always considered bonus animals anyway. Could have gotten Impala, Waterbuck, Croc, Hippo without any issues (other than my budget). They have a few other species wandering around that wouldn't have been a problem had we been after them. It is a great place for high success leopard hunting. As a houndsmen and mountain lion hunter myself, I was always on the lookout for tracks. They have a lot of leopards there. A lot. We even saw one just driving around one evening. If I can save the money, I'd love to go back and see if Dalton could get me a shot at one! I flew in with a leopard hunter who killed a nice male on night two. They had a lion hunter while I was in camp. He scored a nice male shortly after I left.

Basically, it was a classic tracking hunt in wild, wild Africa. It was affordable as well. I hope to return soon.

I highly recommend both Theo and Martin. If you have questions feel free to PM me. 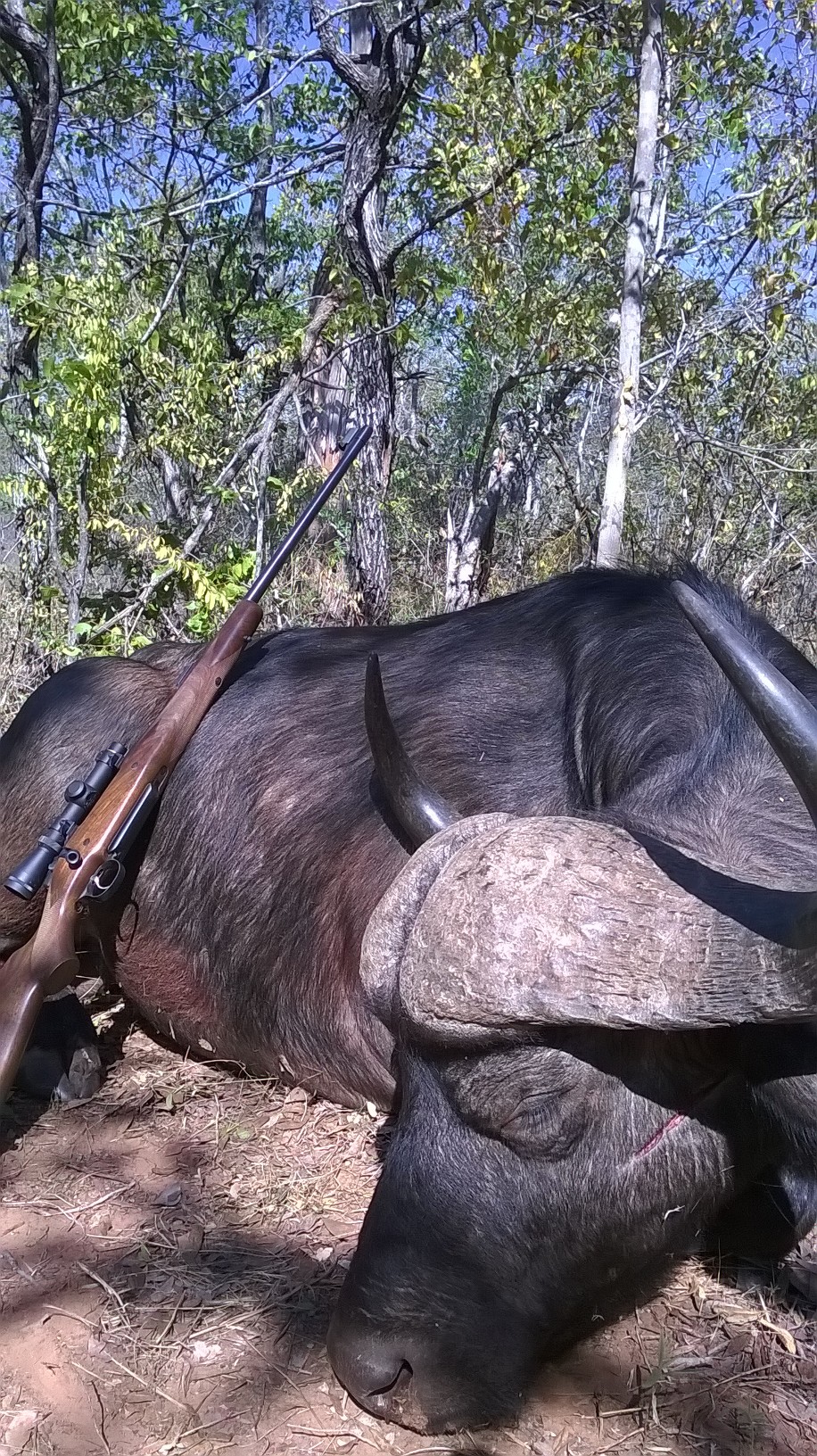 sounds like a great hunt ,
nice buffalo , really like that scar on his cheek , it doesn't look very old (the scar)
marten has some happy clients , and your P.H gets some great revues ,too
THE HUNTER; The person that pays over 90% of the cost for the presavation and maintance of wildlife and gets zero credit for it ................

Thanks! Was quite pleased with him.

Wonderful Buff! Thanks for sharing. Hope you get to go back for Mr. Spots!

Glad you had a great hunt.

If you get any stories published, let us know where.
And here I am, returning to Africa of many faces;.... the sloe-eyed temptress with flowers in her hair who stole my youth and my heart, and left me an old man with a kaleidoscope of conflicting memories of many dashed hopes and some fulfilled dreams. E. Echols
K

Great report and a tidy looking Buffalo with a cool scar!
Thanks

Congrats on a great hunt and adventure. Glad to hear Martin and team continue to deliver.

Awesome! Sounds like you had a great hunt. I have heard good things about Martin Pieters Safaris. Their track record speaks volumes.

Always nice to hear about a succesful trip! Thanks for the report. Great looking animals.
It'not the years, it's the mileage......(Indiana Jones)
W

Sounds like a great time you had there , what sort of price range was the hole hunt sounds really good.

Thanks for the report!

Congrats on your Buffalo and good luck with the pubs.

Congratulations. Glad your hunt went well.
Tommorow is promised to no one. Go live your dreams.

npm352 said:
A portion of this hunt can be found in an article I wrote that is featured in the latest DSC Game Trails magazine (2017 Convention Issue). If you're a DSC member, tell me what you think of the story. It is titled "Zambezi Tuskless." Another portion of this hunt will be featured in an upcoming Sports Afield magazine. I'll keep you updated.
Click to expand...

I read your article in DSC and what a well written piece. Congrats on the hunt with Dalton. He is a great guy and no he does not quit! I hunted with him and Martin in April and would certainly consider hunting with them again.
Regards
Philip

The Buff scar is pretty awesome. Nice to read a report on Zimbabwe. Will look out for the article too. Cheers

Thanks for the kind words Philip. Glad you liked the article. I hope to go back sometime too when the finances are right. It is a good outfit with good people.
You must log in or register to reply here.

Rob404 Newboomer Rob404 wrote on Newboomer's profile.
I,d like to buy some pistol primers if they available,thanks
22 minutes ago •••