Having previously hunted with Todd before, last year, we were after the elusive leopard. We traveled to my hunting area in West Nichelson where I had been prebaiting for him the week before.

As the sun rose on the first morning, we set about checking the baits. By the time we got to the second bait, our hopes were high as we could see that the bait had been fed on. We then discovered it was a female. We checked the remainder of the baits, having also in this time shot 2 impala to replace the rotting baits. After lunch we set out to find a zebra to add to our baits.After an hour or so we came across a herd of zebra,we made a stalk from about a mile away getting to within 100 yard. Todd made a good shot and we recovered the zebra quickly. 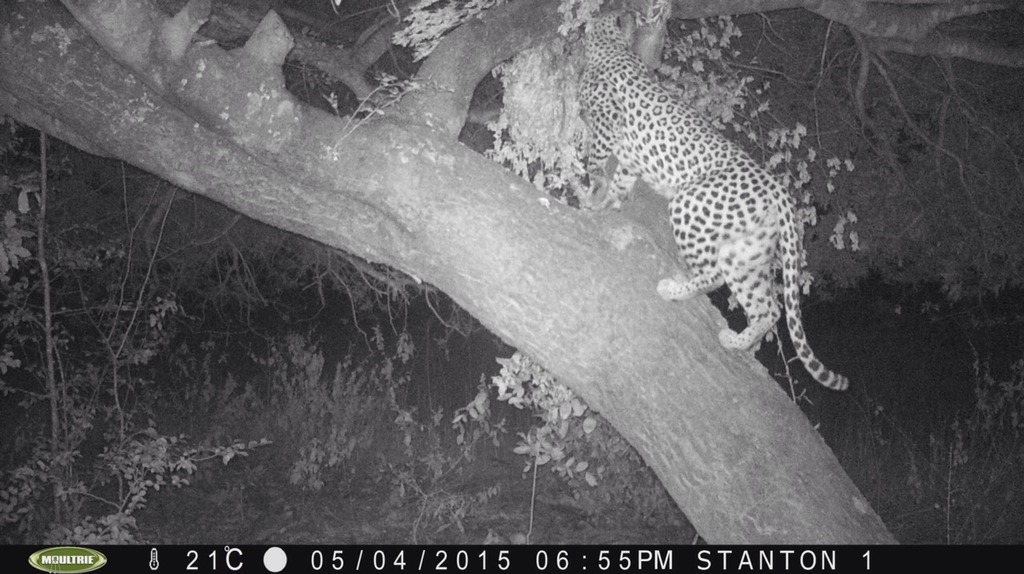 The following day we quickly checked the baits again and moved to my other hunting area in Insiza Campfire where I had had a few reports from the locals in that area that there had been a large male leopard lurking about. We spent a day or two with the various villagers trying to find out more about the leopard movements and ended up setting up an additional 6 baits in the area. 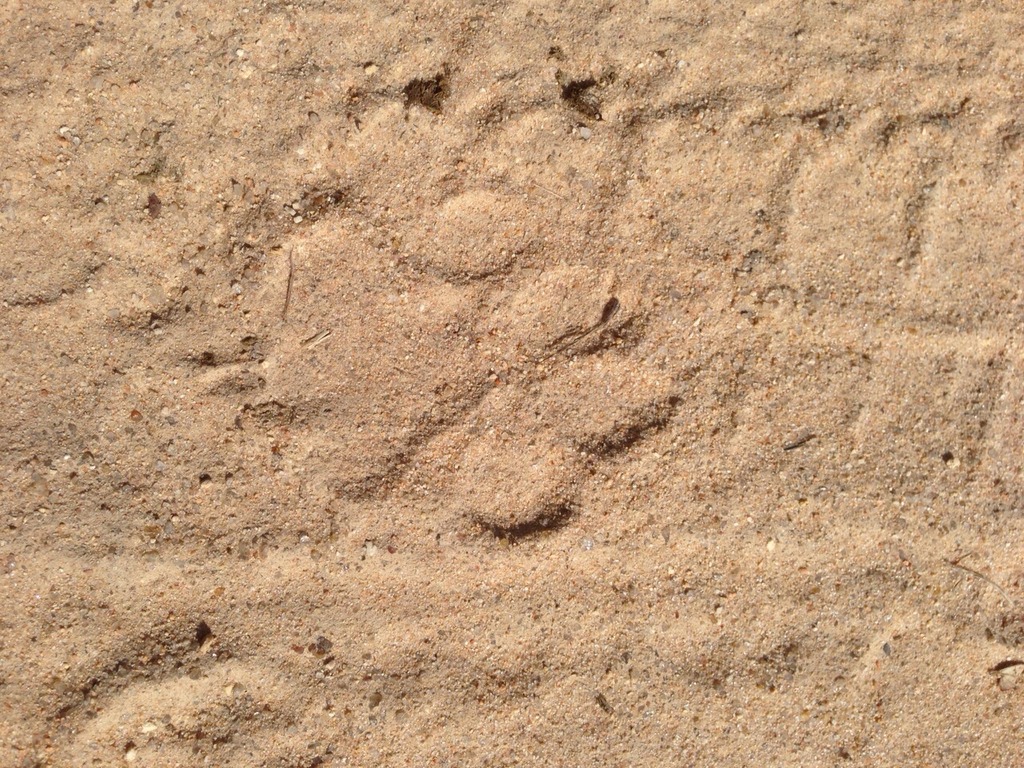 Like the other days we started off to another area within the Insiza Campfire area where I wanted to put some more baits, but halfway there I got a call from my tracker who was in West Nichelson saying that a big male and female had fed on one of my baits,so Todd and I decided to head straight for West nic and set up our blind. The blind was all set up and ready by 1:30 pm. After a quick lunch we gathered our weapons and flashlights and walked into the blind about a mile and a half or so. Todd and I set the weapon up aimed at the bait then retired to our sleep in blind where we would wait for the cats to return. At 7 pm we could hear the deep grunting of the leopard not far from the bait he was mating. They lay 50 yards behind the bait for about forty five minutes before they walked in a started to feed, the male first. Turning the rheostat up slowly, I began to make out the leopard in the dim light, after a few seconds I could clearly see that it was the male feeding and the female was laying a few yards to the left of the base of the tree. I told Todd that it was the male and he should shoot,a few seconds later the silence was broken by the sound of Todd's .375 going off,the leopard jumped off the branch it was standing on and then took off, the female sneaked away after the shot. Walking back to our blind, Todd said he was unsure of the shot,so we put our boots on an approached the bait very cautiously. Once at the bait we searched for over an hour looking for any traces of blood...........nothing!! We decided to call it a night and return in the morning to make 100% sure that the cat was not wounded. 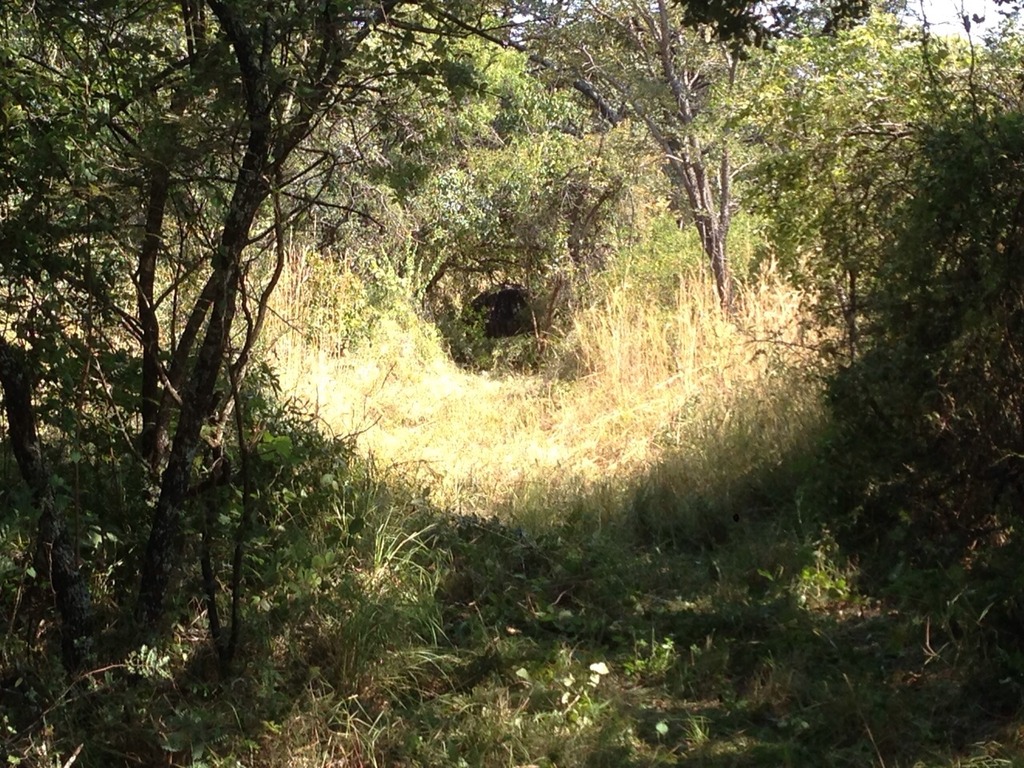 Waking up at sunrise with the sound of baboons barking in the distance, we grabbed a cup of tea and a bite to eat then headed to out blind to check for any signs of the big cat. As we came down the road the trackers tapped on the roof and said the leopard tracks are on the road heading to another bait,we followed them about half a mile then they turned and headed straight to another one of my baits and had a good feed,the Zebra bait was half eaten maybe thirty pounds of meat had been eaten. We went back to our original blind just to make sure that they had not fed there aswell, they hadn't. We then went checked the weapon to make sure it was still shooting straight and it was. After cutting a few poles and collecting bushes we returned to where they had fed and built out blind forty yards from the bait with a walk up to our sleep in blind. It took us about forty minutes to have everything set up the light,listening device, two blinds and the weapon. We walked out quietly as I suspected that the leopards would be sitting on a hill watching us, my plan was to walk in from a few miles away hoping the cats won't notice us.

Returning at four thirty we set the weapon up and waited. After three hours we could hear the pair mating a few hundred metres away. The pair came into feed at about seven thirty but we were unable to get a shot. They fed a few times through the night but each time we were unable to get a shot. At this stage unbelievably frustrated does not even begin to describe the our mood!


We spent the next day checking baits to find only a female feeding. We decided to go and sit on our male and female again. At seven o'clock a cat could be heard walking around the bait,we walked up very quietly and slowly switched on the rheostat we saw that it was the male feeding but unfortunately he did not give us enough time to to get a shot as he jumped off the tree and disappeared into the night. He returned several times that night but each time we were unable to get a shot. At this stage I am really starting to believe that a cat has 9 lives! 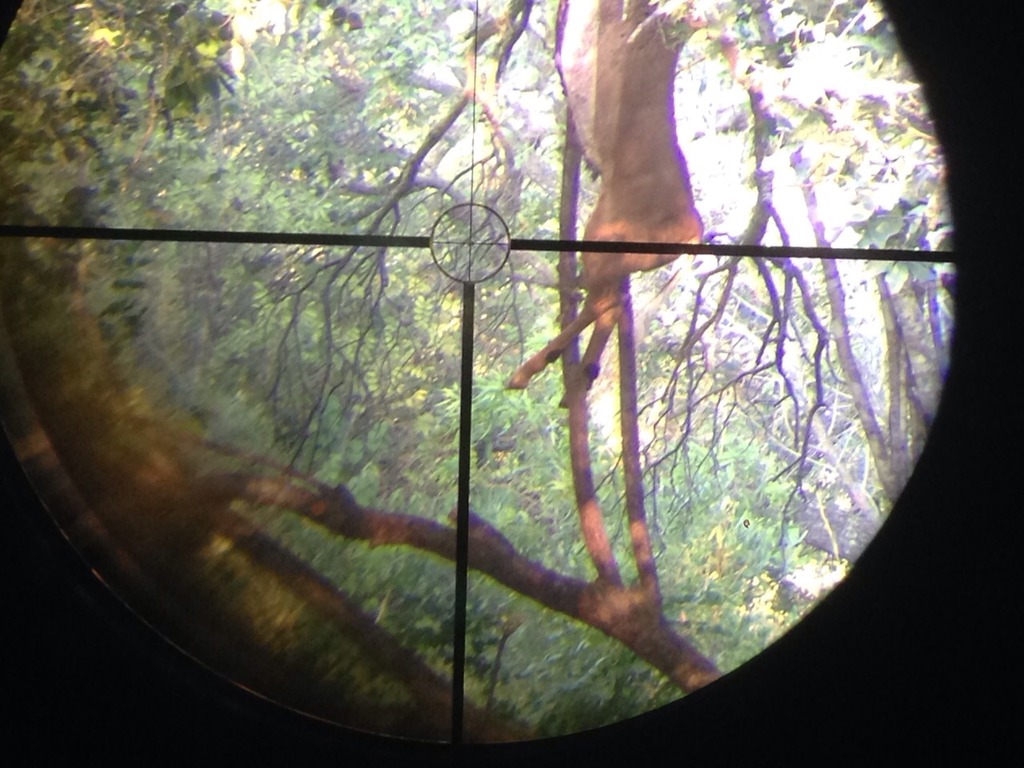 We checked our baits that morning then headed back to Mbalabala to go refresh baits on that side. On arriving there it was reported that a cat has been feeding on a bait about two hours from camp. Waking early Todd and I headed out to try bag an impala bait for our leopard that had fed the day before, it didn't take us long to get an impala. As soon as we loaded it up,we headed straight to our bait site in the Insiza Campfire Area. We found that the male had indeed returned. We quickly got started building our blind after 35 minutes all was complete. I used a pop up blind on this cat as I was sure he was sitting on the hill watching us. We returned at 4:30 and sat to wait for the cat. It was just after 7:30 when I heard the cat walk up to the bait and sit under the tree. It seemed to take forever to jump in the tree, reality was it was only a minute or two, he started to feed and I gave him a minute to get comfortable feeding then slowly turned the rheostat up. Immediately I could see it looked like a decent male but I needed to make sure he was a male ......eventually ....he turned slightly and I clearly saw his testicles and gave the word to Todd to shoot. After a second or so the sound of his .375 shattered the silence and the cat jumped off the tree and disappeared into the Jesse. After radioing the trackers we walked up to the bait to check for any signs of blood. It took a few minutes to find the blood but once we found it we could tell that the cat would be dead as the blood was pink and frothy. After several minutes inching slowly forward we found the tom dead no more than 20 yards from the bait.... High fives and celebratory hand shakes all round... Todd had finally got his elusive leopard!! 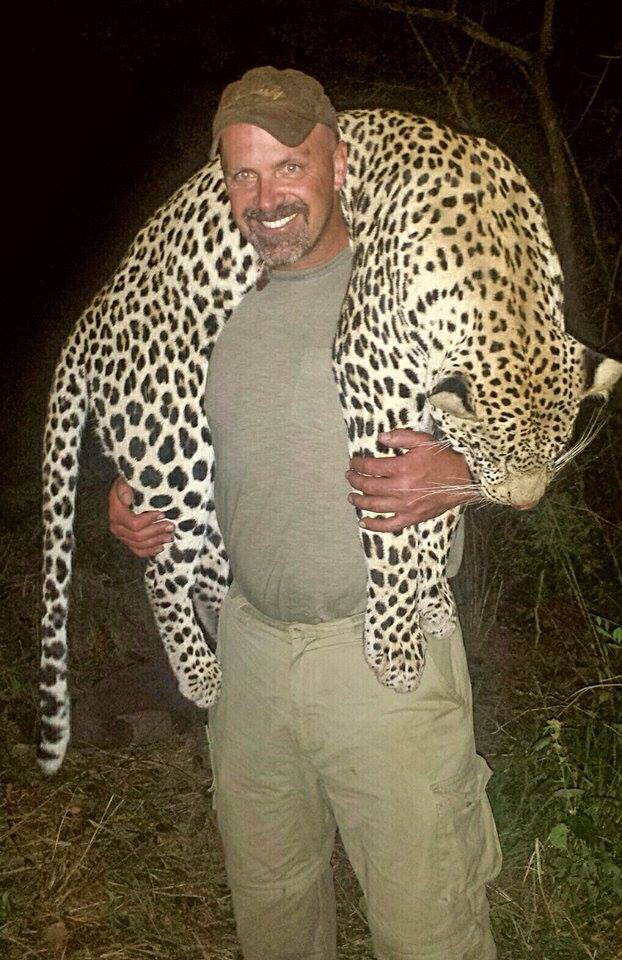 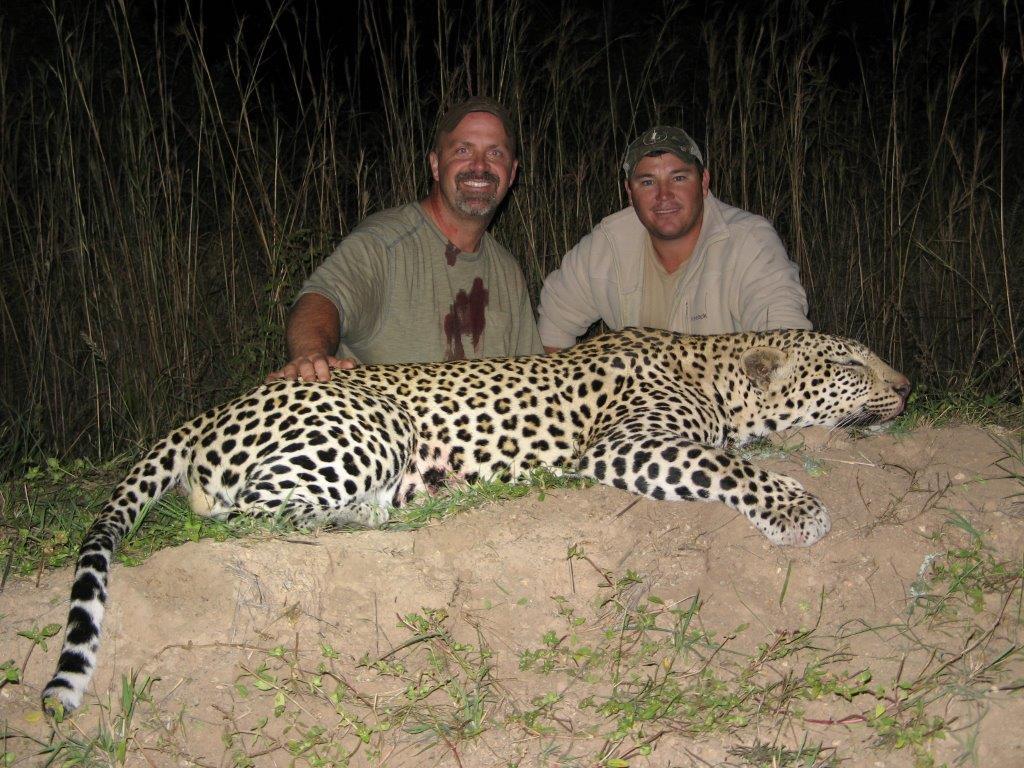 Congratulations... I leave on September 5 th for my leopard hunt..Namibia...Nice Cat!
Tommorow is promised to no one. Go live your dreams.
N

Great Mr. Spot,s In 67 day,s I will try once more in Mozambique For my Spot,s John

Thanks for sharing the story, congrats on the cat!

no1waterdog said:
Great Mr. Spot,s In 67 day,s I will try once more in Mozambique For my Spot,s John
Click to expand...

Good luck!
Tommorow is promised to no one. Go live your dreams.

Enjoyed the report. Congratulations to all involved.
And here I am, returning to Africa of many faces;.... the sloe-eyed temptress with flowers in her hair who stole my youth and my heart, and left me an old man with a kaleidoscope of conflicting memories of many dashed hopes and some fulfilled dreams. E. Echols

Awesome! Love the Cat. Congrats thanks for sharing!
Enjoy Life Now! It has an Expiration Date.

Welcome to AH Lin! Looking forward to your input.

great hunt and beautiful cat!!! Congratulations!!!
I am looking for a 2017 leopard hunt as well.

Great write up, I'm off for mine in August
Let's make a plan

Good to have you here Lin. Great story. Thanks for posting. Nice cat too. Bruce
You must log in or register to reply here.

H
Hencoop
I am alive and trying to find some hard-to-find reloading dies in .475 #2 (not Jeffreys)
55 minutes ago •••
J
Johnny Forbes
Hi, I’m going on a Leopard & Lion hunt, I’m taking my 338 Blaser mag loaded with 225gr Nosler Accubond moving at 2850ft/s. Will the Nosler Accubond be an excellent bullet on this leopard & lion? Thanks
Today at 11:54 AM •••
R
raamw MShort raamw wrote on MShort's profile.
I have an as new M70 right hand with standard wood of excellent graining and a winchester synthetic