Edge said:
Good things come to those who have patience...like a leopard!

Patients are for Doctors!

Surprisingly I was able to doze off for a few minutes after lunch. The weather had cleared and its bright and sunny, t-shirt weather but not overly hot. I grab a long sleeve fleece shirt and a heavier fleece jacket, fleece cap and gloves. Not sure how long we will be in the blind and want to be prepared. 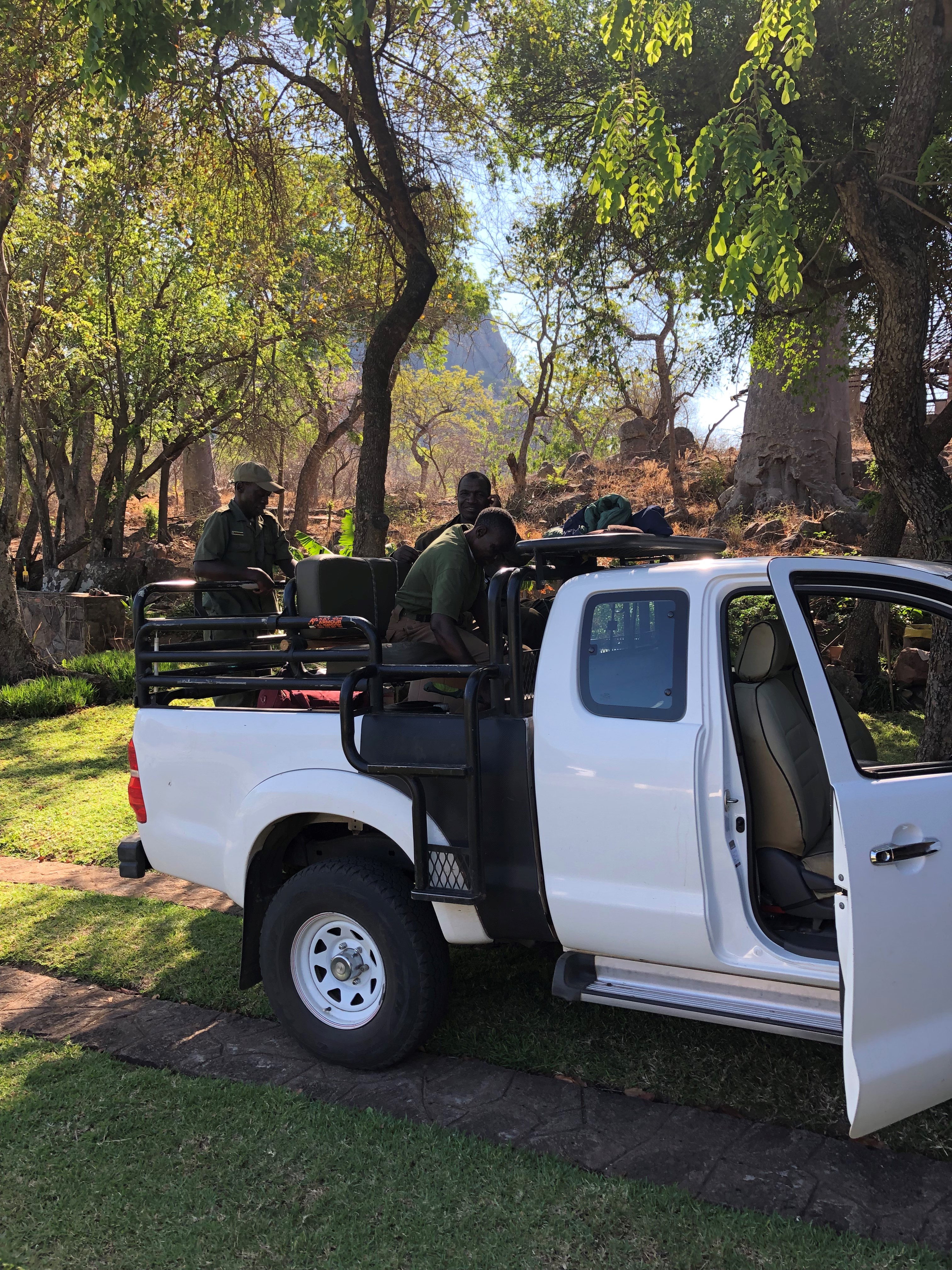 We enter the blind by 4 pm and settle ourselves in, arranging our gear and making sure anything we had that would make a noise if we bumped it in the dark was safely stowed. Rifle was in the tripod, verified I had a shell in the chamber, the crosshairs were just a hair to the left of the bait and about 18 inches over the log, adjusted the Zeiss power ring to 7 and checked to make sure the electronic red dot was functioning. I practiced getting up slowly into position, pulling out the knob for the dot and settling in behind the rifle. Practice makes perfect.

Then the wait begins, there was little wind and it was a beautiful evening. The chirping of the birds magnified by our spy gear, contrails of jets overhead and the ever-brightening moon as the sky turned a dark blue as evening set. 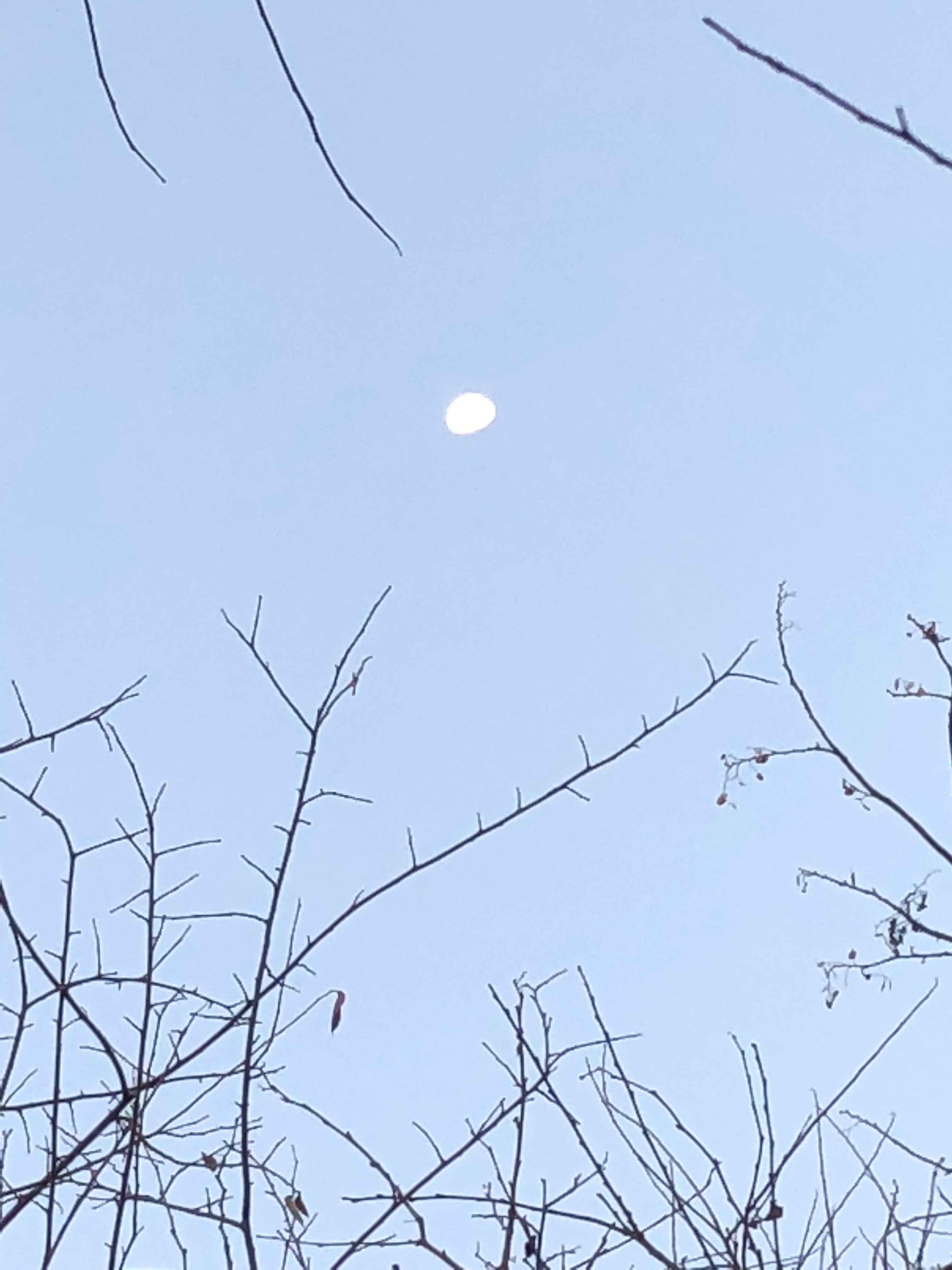 We did have a tiny visitor check out our set-up, this bird was as tiny as they come! He hung around for awhile and provided a bit of entertainment. 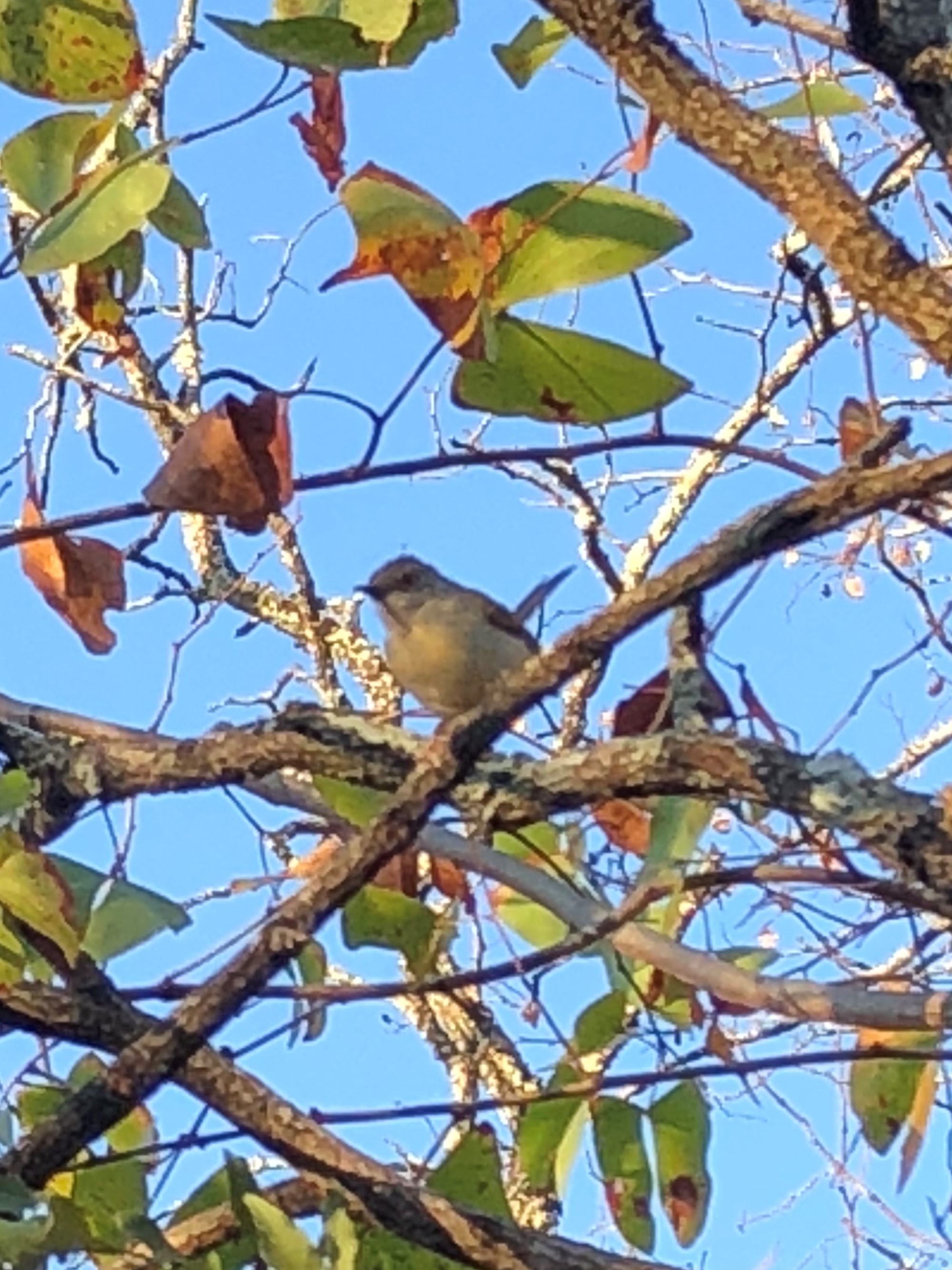 As darkness set you could hear larger animals moving about in the bush, probably heading to the water point a few hundred yards away. The moon cast enough light for Wayne and I to easily see each other as we both lounged on our backs listening to the night sounds. It was really entertaining listening to the animals at night and time passed quickly.

The night before, Wayne and I discussed shot placement for leopard and used the many pictures as discussion points. He prefers a shot behind the leg as it provides more room for error than trying to break the shoulder. If you are too far forward or a little low and forward you will have an issue on your hands.

I hear a scratching in my ear bud and glance to my right, Wayne had also heard it and pointed to the bait. We both slowly and quietly got into position as he was looking through his binoculars as I got behind the 30-06, pulled the knob out for the red dot and settled in behind the scope. I can see a leopard on the top log!

Wayne asks if I’m ready as he’s going to turn on the red light positioned behind the leopard so it wasn’t shining directly in his eyes. The light comes on and I settle the crosshairs just behind the leg crease. The leopard is half squatting with his head up towards the bait, when the light comes on he barely flinches and I can immediately see a good set of nads hanging out his backside. I’m waiting for what feels like an eternity and whisper to Wayne, I see balls! What’s taking him so long to tell me to shoot? Is it the wrong leopard? Of course, this happened in less than two seconds and then the whisper to take him. Cross hairs/red dot is behind the leg…squeeze…poom the rifle fires and I catch a glimpse of the leopard jumping down off the log towards us.

We still have our listening devices on and you could hear him hit the sand and then scuffling through the dry crackly leaves for a few seconds and then silence, and more silence. I have a big smile on my face and Wayne asks me if the shot was good. I tell him yes, behind the shoulder. I just shot a leopard!

Time is 7:55pm, less than four hours sitting in a blind for my first leopard!

We give it a minute or two and call the team on the radio, bring the truck. Wayne checks his 458 Lott and I make sure I have a fresh round in the chamber, safety on and scope dialed down to 2 power. As a group we head down to check the bait site, sure enough, blood, on both sides of the log and what looks like a bit of lung on the far side.

There are big indentations in the coarse sand where the leopard jumped off the log and splatters of blood. Wayne declares we have a dead cat from looking at the sign. 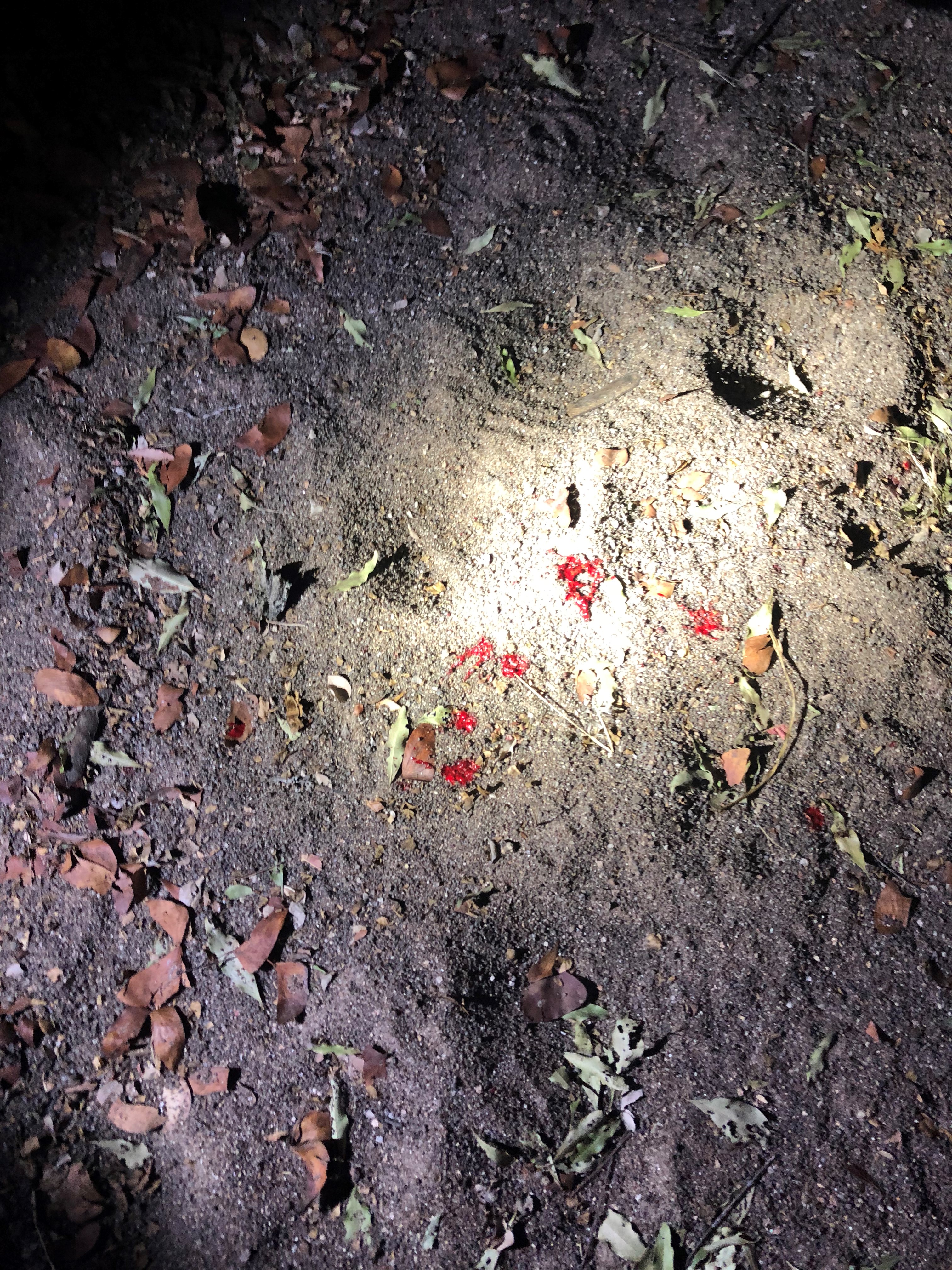 Hard to describe the emotions of what has happened over the last few minutes and how quickly it all transpired. We give the cat another couple of minutes and the follow-up begins. The cat had jumped down off the log and ran to our left up a wide game trail, easily following the blood splatters.

We cover twenty then thirty yards. Where is the dead Tom? Tensions are mounting every step we take and we have slowed to a crawl, lights looking into every nook and cranny on all sides of the trail, it’s awfully thick. We have looped around and have crossed back over the dry creek bed, behind the bait site. We pause for a few minutes to catch our breath and steady the nerves. He shouldn’t be this far and the blood spots have lessened. Do we have a dead cat or he is about to make his attack?

We take another step and someone (think it was Wayne) says “there he is over there” and a light beam flashes and all the other torches shine on the spot. Dead. Done. Not moving!!! The tensions melt away and congratulations all around!

This is how we found him: 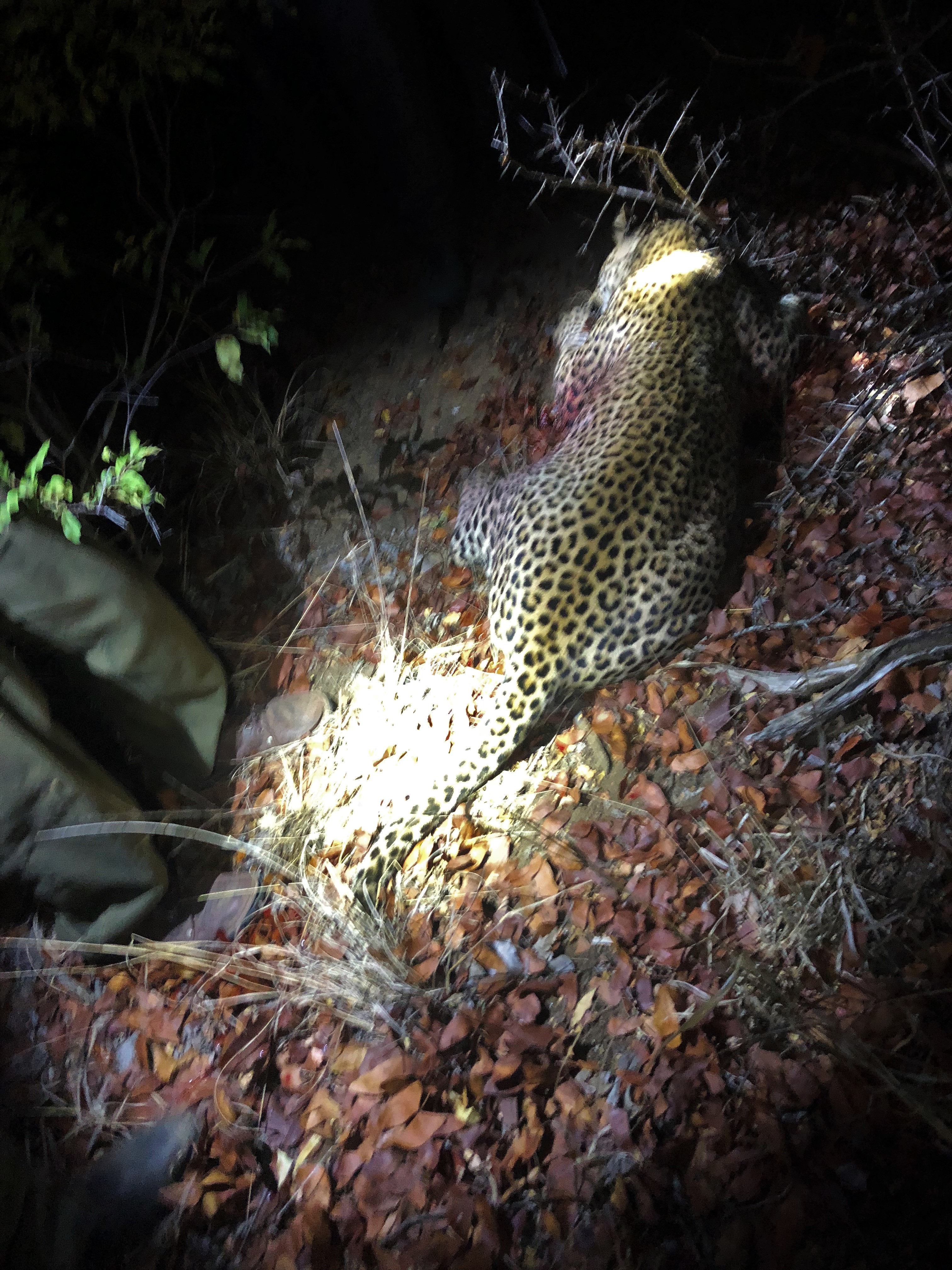 The guys fashion a carrying stick and haul out the leopard towards the road. We get back to the dry wash and set up for a few photos. 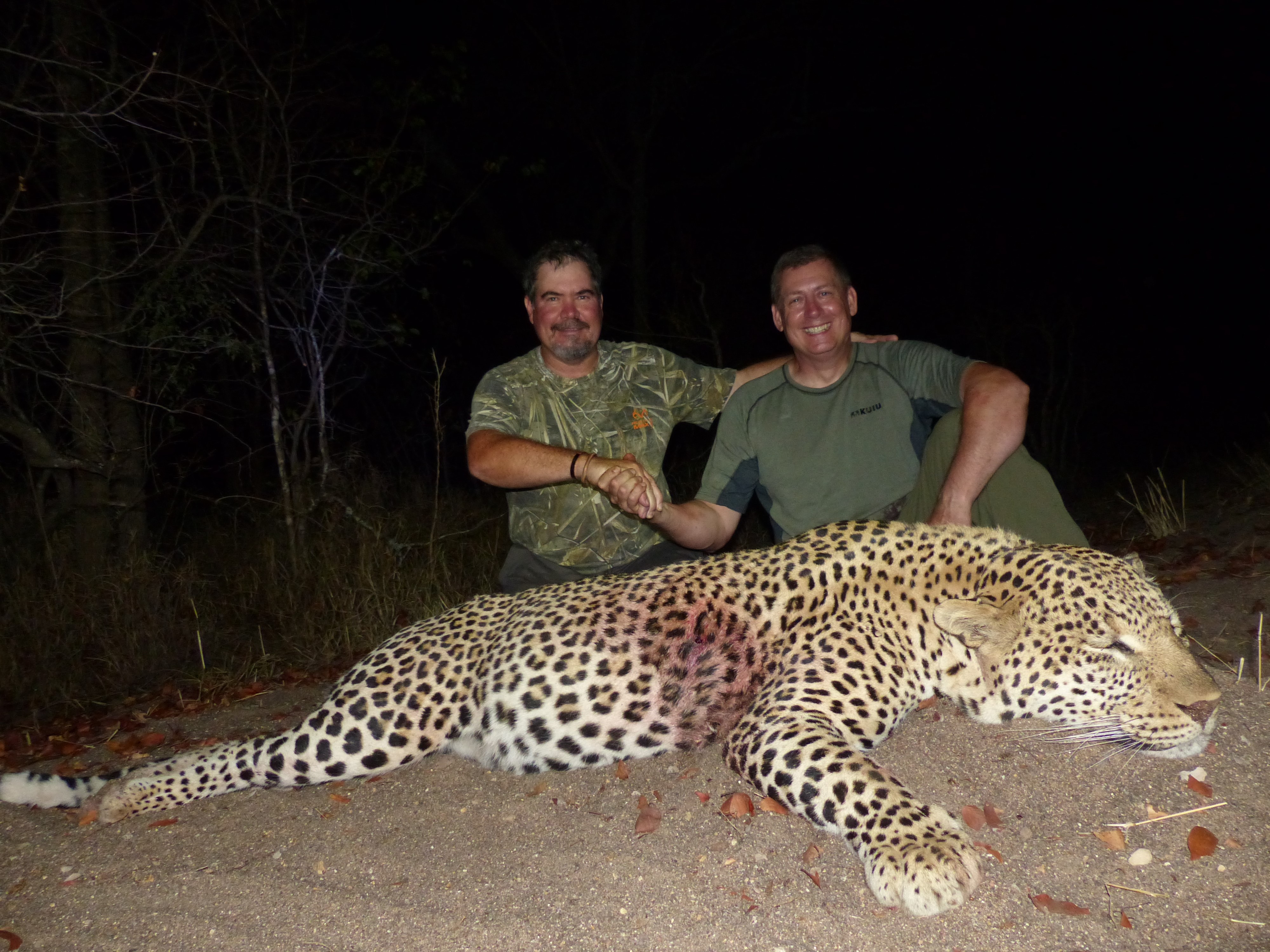 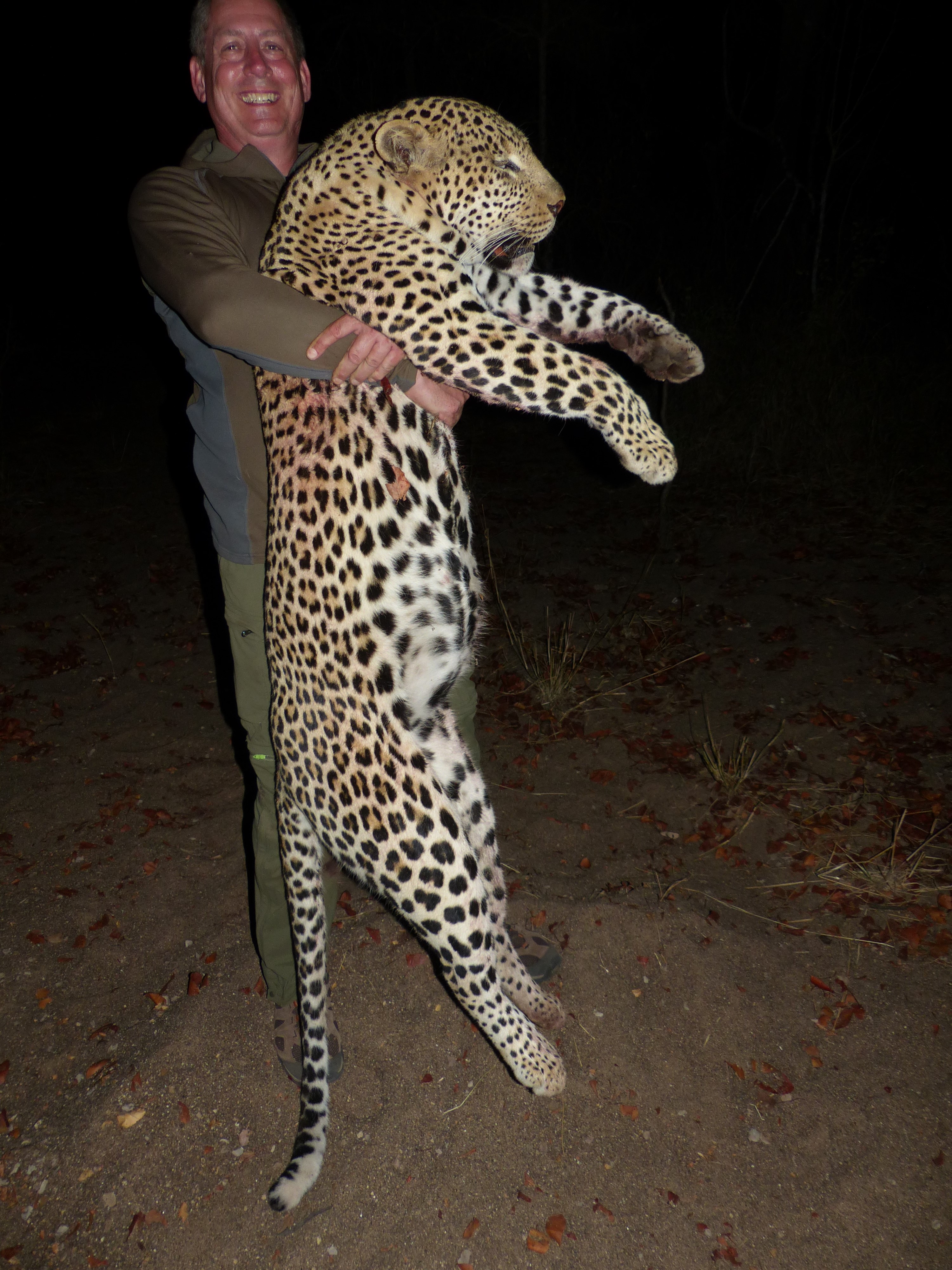 What an evening, we load up MY Tom in the back of the truck, correction, my Wife’s Tom! Let me explain, she tells me before I leave for the hunt when she would say “I want a Leopard” she meant she wanted to shoot a Leopard! We will have a full mount done by @The Artistry of Wildlife and proudly display him in our living room. Now I have to figure out how to fund her leopard hunt!

Wayne and I climb up into the cab and Sam, Cowboy, Dumasen and Parks Ranger all break out singing the leopard song! If you haven’t heard the leopard song, go and shoot a leopard! It’s worth it!

They are singing the entire way, just have to cross the river and its only another few minutes until we reach the skinning shed. We drive down into the river while the leopard song is bouncing off the water and surrounding tress until all four wheels begin spinning, and then it gets quiet. We have crossed this river four or five times without much of an issue, we don’t need to get stuck in the middle of the river tonight! We end up backing our way out and going the long way around to reach the skinning shed. Wasn’t all bad as the leopard song was sung the entire way!

It's around 11pm by the time we get back to the lodge and have them fire up the generator. Time for a few drinks and some dinner and a few more drinks, what a day!
Last edited: Jan 3, 2019
E

Probably a clueless question, but nightvision scopes for leopard hunting? I use a cheap digital nightvision one for woods coyote hunting and they work amazing.

What a stud of a leopard! You must be setting some sort of record on how quickly you got your elephant and leopard.

Eric Anderson said:
Probably a clueless question, but nightvision scopes for leopard hunting? I use a cheap digital nightvision one for woods coyote hunting and they work amazing.
Click to expand...

I'm sure they would work but the PH needs to see the nads before giving you the go-ahead to take the shot. Bring two!

stug said:
What a stud of a leopard! You must be setting some sort of record on how quickly you got your elephant and leopard.
Click to expand...

Thank you sir, the leopard is a wonderful trophy and my wife is pleased although she still wants to shoot her own leopard!

This is all about sustainable hunting, our hunting dollars go towards protecting this area through anti-poaching patrols. Without hunters there will be nothing left in Africa.

This area has a healthy population and Wayne knows how to hunt leopards, I wasn't surprised we harvested one as soon as we did. As I mentioned in one of the first posts, this area is almost 100% on leopard.

Stay tuned, we are going to chase buffalo next. I'm going to take a few days off to chase Alabama whitetails and will post more when I return.

I’m sooo happy for you!!!! What an incredible adventure and hunt(s)- just.... Wow!!!! An enormous tusker and “ground control to Major Tom”!!

Wow - brought back a lot of great memories. Quite a feeling and well done on the writing - felt like I was with you the whole hunt. Congratulations!

Great cat. Congrats on your success so far. Sounds like you had a great hunt.
Bruce

Congrats on the leopard @Edge! Looking forward to the rest of the report, best of luck with the whitetails.

Great Leopard, congratz! Thank you also for the great story and sharing it with us. The feeling when seeing the leopard through the scope for the first time is truly something that you will remember. As is the time after the shot when searching for the Leopard.

You guys pulled it off, making it look easy.
Congratulations to the team.

Congrats. That is a great cat!

Outstanding hunt! What a great elephant and leopard.

You guys are starting to worry me!

WAB said:
You guys are starting to worry me!
Click to expand...