Outstanding so far on your hunt! Great experience!

My wife stood by my side 24 years ago when I was blessed with my great lion, and I got to stand by her side this time. God is Great!

Safari1 said:
Congrats John. Is it possible Chifunda is better than it was 24 years ago?
Click to expand...

On every drive, we continue to see good numbers of all species. I am most impressed with the number of elephant that we have seen in the last eight days. Strang and I talked about this, and it seems that the Zambian game department is doing a very good job with anti-poaching. It is very refreshing to know that positive efforts are benefiting the wildlife in Zambia. I applaud them for their diligence in protecting their prized game animals

Fantastic report. Will keep an eye on the rest.

Love the story congratulations, to your wife on a beautiful loin, can’t wait for the rest of the story.

Congrats Debra, that is a great old lion !

As always I enjoy the stories of your hunts. This one has been epic so far. That is a wonderful lion. I also want to thank you for the pics. Nice to see the animals and the area that you are hunting. Great report.
Bruce

Congratulations, Debra, on a SPECTACULAR King of the beasts. Perfect animal to take.

Thank you for sharing the story so far, and waiting anxiously for each update.

Great Story. Congratulations to your wife. Bout time we got to read a new hunt report or two.

Grand old lion! Congratz Debra. Thank you for sharing your experiences, many of us are living vicariously through your post. My wife and I are supposed to be flying in 10 days for her Mozambique buffalo hunt but like many flights got cancelled and safari rescheduled to next year.... Again thank you I have enjoyed the day to day experiences you put into words.

And thanks for writing such a compelling story - almost like we were there. And we can use that these days!

Congratulations to all on a beautiful old lion. I truly enjoy your writing and sharing with all.

Fabulous! Just fabulous! Congrats to Debra and all of you for your success, and for your true appreciation of what matters! Bravo!

Up at four, a little foggy this morning from last nights celebration! Two cups of coffee and we were on the road headed for the Plain. We arrived at first light and slowly worked our way through the area looking for the Buffalo herd.
It became obvious after a couple of hours that the presence of the Lions has moved the Buffalo out of the area so we went to drop the baits and head over to speak with the fisherman about the big Elephant.
Just as we approached the downriver bait, a Lioness ran across the road in front of us. There was sign that multiple cats had fed and game camera pictures confirmed that two males and three females had fed in the early morning hours.
Game camera pictures indicated we had a female leopard feeding at the upriver bait along with several interested Hippos and a Croc but no Lion’s.
At the lagoon, Strang spoke with one of the fisherman, an old man that has been there many years. He described the Bull as very big, with curving tusks more than a meter out of his head and big around as he pointed to a tree trunk. He said the Bull comes for water almost every day between noon and three.
They made an arrangement to get word to us if the Bull shows up again so we head back to camp for siesta and once again we hurry up and wait.

About 3:30 we decided to go out for an evening drive and swing by the fisherman to talk to him. He said the bowl came in about noon but he didn’t have any way to get word to us so we decided that we would just go sit there tomorrow from 11 o’clock onward and wait for the bull ourselves.

We carried on the evening Drive last hour and a half the day enjoying this beautiful area.

We saw quite a lot of game including Kudu, Bushbuck, Puku and of course more Elephant. The highlight was when we came around to the location of the downriver bait we saw the two male Lion’s, crouching in the grass.
Back at camp, we had a traditional safari meal with hippo tail soup as a starter and fried Impala steaks, chips and vegetables.
Down at nine tonight another early day as we will go back to Chipuka Plan in search of buffalo first thing tomorrow.
S

Good luck on the big elephant. There are 70 pounders there from what I hear.

I woke this morning just before the generator and felt great. A quick cup of coffee and we were on the road. We arrived Chipuka Plain at first light and made our rounds searching for the Buffalo.
Once again, we came up empty as the herds mist still be in the park.
We hit the main road that separates Luambe National Park from the concession and Strang had just got up to cruising speed when Darrison said “Buffalo”.
Strang came to a halt and reversed to where we could see them. A small group with some nice bulls. The Buffalo were about 120 yards into the concession and disappeared into the bush.
Quickly we offloaded and we’re on the tracks. It took us about 15 minutes to catch them and we could see several bulls. It is a small group with 8-10 bulls and an equal amount of cows and calves.
It was hard to get a good look as they were in and out of the dense bush. Several times we button hooked to get back in front of them. On about the 7th or 8th time we got to a place we could see them Strang set the sticks as we glassed.

The bulls were scattered amongst the group but we both saw the biggest bull at the same time. I got my rifle up on the sticks trying to locate the Bull - they are about 80 yards out.

Strang said “there he is by that white tree”. I struggled to find the white tree. Then he said “another bull just passed in front of him” and when he did I was on the bull.
I slipped the safety off and as he stepped forward quartering away I saw my shot and took it.
The 375 jumped and I reloaded. The herd thundered off into the concession with my bull far at the rear. We started heading towards the tracks and Strang stopped and said “listen” he had heard the bull. As we picked up our pace a loser bellow was heard. Strang pointed and we turned towards the noise and shortly thereafter was the final death bellow.
As we approached we could see the Bull was down and not breathing. Strang brought me around and told me to put an insurance shot in him along the spine. The rifle went off and the bull didn’t move, he was dead.

When I walked around front and saw him fully for the first time I was ecstatic. A beautiful bull with nice bosses, character and width.

After handshakes and congrats the boys got him cut in half and loaded so we could get to camp. Our plan is to have a good breakfast and go wait for the Elephant. 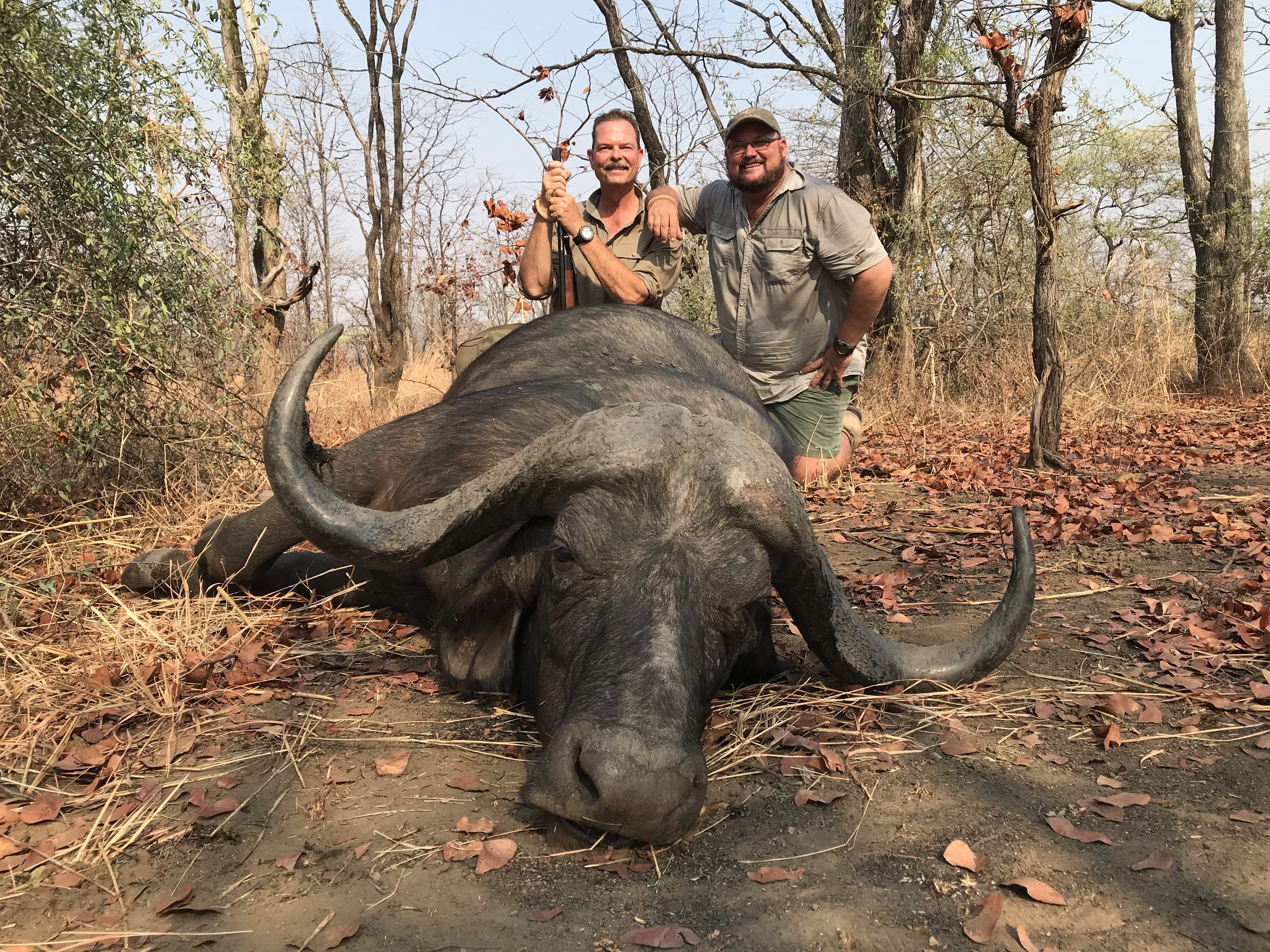 We arrived to the lagoon shortly after 11 and found a shady a spot to camp for the day.
The trackers and scout all went down to the lagoon to watch for the bull. Hopefully he shows so we get the chance to judge him properly.

Around 1:10 the trackers motioned is over. The first group of 10 elephants arrived, cows and calves. They drank then rolled in the mud and fed about the area before retreating back into the forest.

We stayed until 3:20 and our Bull never showed.

So, we decided to take a drive up river. Thunderheads are forming and the rains are coming. Before we got to camp at sunset a few raindrops hit us on the back of the cruiser. The temperature is falling and it is welcomed.
Back In camp we had highballs by the river and Strang’s special “bush calamari”. That is the the reticulum of the abomasum stomach from the Buffalo, cleaned and sliced into strips then fried. Amazing how it resembles calamari in both taste and texture.

We will sleep in tomorrow and go back to the lagoon and wait for the Elephant Bull. We have two days left and I hope the recent weather change doesn't go on a walkabout.
You must log in or register to reply here.

ZAMBIA: 2018 Hunt With Strang Middleton In 2 Different Areas Of The Country
7 8 9