Why Do Hunters Think It's Cool To Kill Lions

Here's an interesting article I found on vice news. It's a bit old and came right after the Cecil controversy, but I thought it was interesting to see a news site just interviewing hunters rather than getting caught up in the hysteria.

It's now been three weeks since a Minnesota dentist named Walter Palmer was accused of illegally shooting Cecil, a beloved Zimbabwe lion. There's been a frenzied reaction internationally, with the story still outraging people across Facebook and Twitter. And while the non-hunting public are angry for a few reasons, it seems most people are simply shocked to learn lion hunting still exists.

Personally, when I see that photo of Palmer, I just wonder what's going through his head. I have the same question for all trophy hunters generally. How do they see their sport? What part of shooting big animals do they actually enjoy? So I made some calls to find out.

VICE: Why you think people have been so upset about this?
Markus Michalowitz: I think it's because people aren't in touch with reality about what helps animals. Namibia was on the brink of losing its wildlife 40 years ago. Farmers were raising cattle, and they were shooting the local lions to protect their herds. But then trophy hunting came in. As soon as there was money to be made, farmers turned their properties into wildlife reserves. Now they make money from protecting the local wildlife. People don't realize this.

So you don't feel lions are special?
No. The issue is that most kids grow up in the cities and all they know about lions is from the Lion King.

So how would you justify killing a lion?
It's very hard to explain, and I think about this when I see Facebook messages comparing us to psychopaths. When I kill an animal, I feel a lot of remorse. I'll always walk up to the animal, give it a pat, and say thank you. I thank it for having been alive and providing me with its meat. And I say sorry for ending its life. To me this feels very natural. All cultures throughout history have revered the animal they hunt. They respect them.

Would it be justifiable to kill a person if you respected them?
No because it's a person, not an animal. You have to make that distinction. Humans have a soul and we should, in some respects, be above animals. Making analogies between animals and humans, that's where the Lion King has gotten us. Animals don't talk. They can't reason and understand.

So do you think animals cherish their lives less than people?
Yes. Animals only understand danger, not death. When a gazelle runs from a lion, it's not running from death. It's running because a program in its head tells it the lion is dangerous. That's the same as a baby reaching for a teat at birth, it's only programming.

This woman, who I'll call Penny, runs a hunting company in Queensland, Australia.

What do you think of this controversy?
Penny: I think it's gone viral, or whatever the hell it's done, because it's not a very nice story. But what doesn't go viral is how the revenue from hunting helps endangered species.

I think the reason it's gone viral is that lion hunting appalls people. Do you think lions are sacred?
They're not a sacred animal and neither, it seems, are people. And lions take people too. Would people be so outraged if there was a story of a lion killing a child?

Is the life of an animal different to the life of a human?
I think it is. I come from the land; I've raised cattle and sheep that go to abattoirs so people can eat. Lions are nice, but people have a romantic perspective on them that just isn't logical. They're not any more special than a sheep or any other animal.

What, to you, is the philosophical justification for taking a life?
I'm not sure what you mean. I just think people have lost perspective. The loss of a life is always sad but that's life. There are a lot more sadder things in the world.

Hi John, has anyone ever been angry with you for hunting?
John Hossack: It happens all the time. I'll post a picture and suddenly I've got all these people hoping my whole family gets cancer, or that an animal kills me. Some of those posts are really quite violent.

What do you think inspires this?
Stupidity. It's like the people who stand outside abortion clinics and attack doctors. I just don't think like that.

What is it that you enjoy about hunting?
It's not the killing I enjoy, it's the hunt. I enjoy trying to outsmart deer, and if I'm successful I'll get about 200 pounds of meat, a nice skin, and a nice rack. But it's pursuing the animal that I enjoy. I think there's something about it that goes back to caveman days.

How do you feel when you kill an animal?
Sad on the one hand, but then I also rejoice. The creator, if you want to call it that, has given us something. Then I imagine it's very quick. Most times I don't believe the animal knows what's going on. So then I've taken that life but that's OK, I'm at peace with it. It's a sad moment so I like to sit there for a moment and reflect on it. But it's part of life on Earth.

How do you feel about lion hunting specifically?
There's nothing wrong with lion hunting. They're not endangered all over Africa and you'd absolutely never get a permit in a place they were. You can only hunt if there's sufficient numbers. If someone wants to go legally hunt in an area and pay large amounts of money that will go to the local community, good on them. I don't have that kind of money myself. 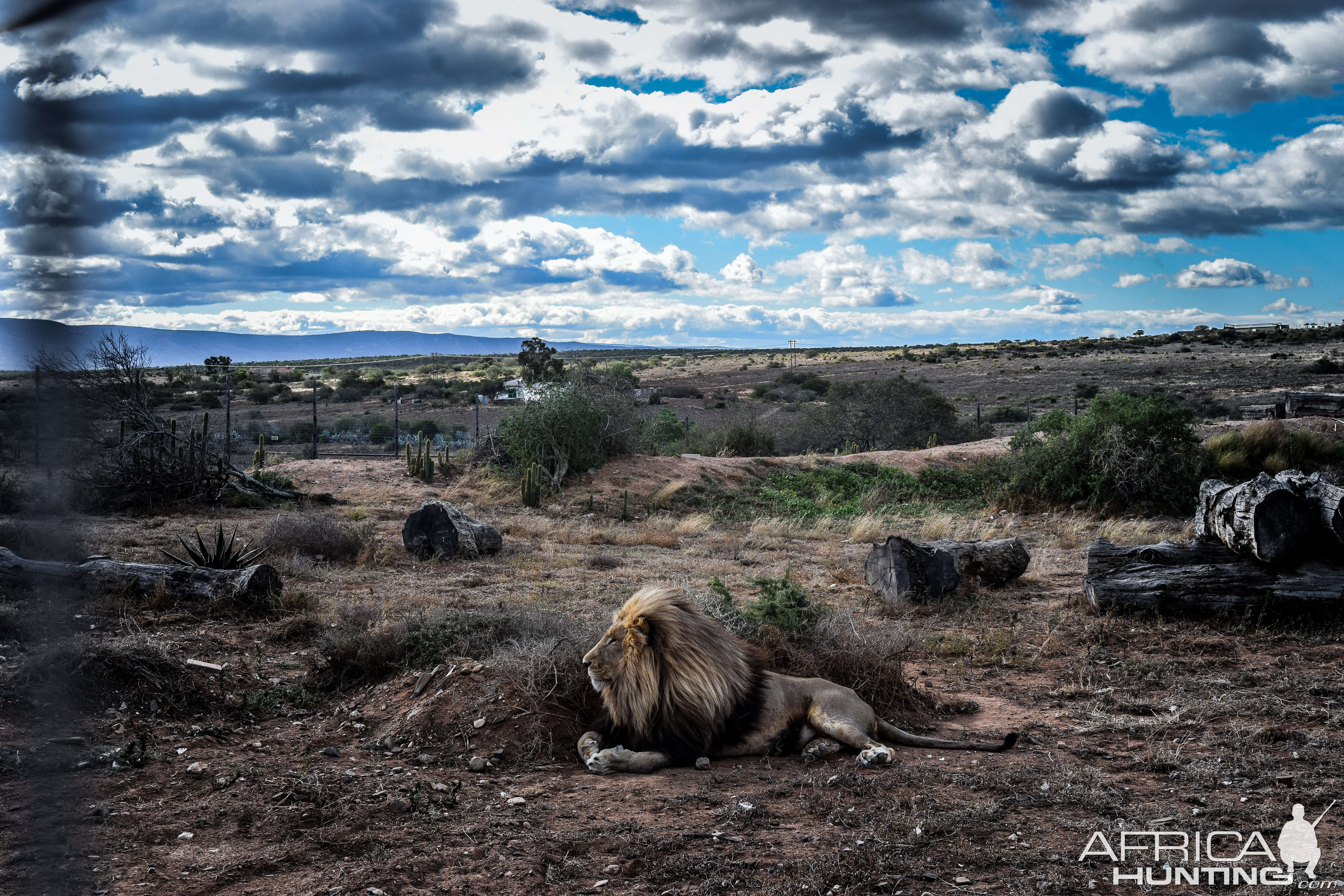 Thanks for sharing! I plan to read it this evening.

Interesting find. Thanks for bringing it to AH.

Great article, thanks for sharing!

Interesting, thanks for sharing

Thanks for sharing !
H

Boils it down nicely - people have lost their perspective. Food comes from the grocery store and are removed from the fact that for life to sustain there has to be death of some sort - vegetative or animal.

"So how would you justify killing a lion?" ... Answer I don't need to justify anything to anyone.
B

My guess is that there are a lot more talking cartoon lions and elephants than talking cartoon impalas and kudus. If that is the reason, it is a truly sad commentary on the intelligence of the human race.

It is quite refreshing to read an article where the representatives for hunting interviewed are intelligent, introspective, and knowledgable of the subject matter. Too often the media finds the first person who owns camo, declares them the voice of hunting, then goes to press with whatever comes out their mouth.

Mort Hill said:
It is quite refreshing to read an article where the representatives for hunting interviewed are intelligent, introspective, and knowledgable of the subject matter. Too often the media finds the first person who owns camo, declares them the voice of hunting, then goes to press with whatever comes out their mouth.
Click to expand...

Hunting PAC lions is really cool and dangerous....
Hunting lions over bait is also cool has its own challenges and can be real rewarding...
Hunting lions on foot is also cool and results in the most challenging shot taking ability....
Hunting lions by chance is just as cool as it rarely happens but when it does things happen quite fast....
Anti hunters of lions have no clue how lions and lion prides function neither do they have the faintest idea what conservation means or the contribution that hunters make towards hunting. Be it a lion, elephant, black rhino or whatever....

So yes hunting lions is cool so stop hugging bunnies and shoot something.....
B

"Hi John, has anyone ever been angry with you for hunting?
John Hossack: It happens all the time. I'll post a picture and suddenly I've got all these people hoping my whole family gets cancer, or that an animal kills me. Some of those posts are really quite violent.

What do you think inspires this?
Stupidity. It's like the people who stand outside abortion clinics and attack doctors. I just don't think like that."

Overall it's an interesting and refreshing alternative to the typical anti hunting rhetoric but I found this particular comment disturbing. I don't understand how someone can equate ethically hunting animals to murdering humans.
You must log in or register to reply here.

Hunters Can Save Lions & Lion Hunting