This stalk started a bit over an hour ago, but the story begins long before that. Though I cannot pinpoint exactly when, I know it is something I wanted to do before the ban on hunting these animals was announced in 2013. Not being able to afford to pursue them at that time, it was a saddening reality that I wouldn’t ever get to. In a rare turn of events, surely due to threat to the species (which is extinct in the wild largely as a result of war and habitat loss to livestock) when they no longer held enough value to feed and protect without hunters dollars, the ban was lifted in 2014 and one of my dreams was alive once more.

Fast forward some 5 years later to January 11th, 2020, and flashes of orange and white can be seen through the brush we have slowly and quietly made our way to. The animal’s incredible senses were on alert from undoubtedly using the same smalls holes in the cover to see our slow but present movements. We have over an hour of daylight and the wind is right, so the decision is made to sit down, be completely still, and allow the animals time to relax and get back to feeding. Looking at my bow sitting next to me with an arrow knocked, my mind wrestles between being patient and wanting to continue pursuit towards not only an animal that I long for but the first animal with this bow.

Less than 30 yards to the front edge of this thicket we are hiding behind. With a little luck on our side, that’s all the further we need to go to get a shot. We have an hour, we will get there if we have to belly crawl the whole way. Whatever it takes. They begin to relax, get back to feeding, soon we will make the final approach. Just then, a loud “BARK” from our left. A Sika deer we never saw from that direction decided to come see what we were, and she didn’t like what she found. Needless to say, that alert sent all the game in the area running. They sure are sneaky, it wouldn’t be the last archery stalk on this hunt busted by the Sika does. It began to seem like they get enjoyment out of sitting tight in the shadows so they cant be seen, just to be the lookouts for the other game, let out that bark and ensure that our hopes for a successful stalk need to be reset.

The animals definitely know they’re being pursued now, even after a night of rest. Several stalks, several sits in blinds without seeing the right animal, its time to carry the bow and the new-to-me Blaser double. Its now midday January 11th, we come up on a small herd and are at 45 yards before we know it. I get a range, grab the string loop with my release and get ready to draw about the same time they get ready to move away, as we are in their comfort zone now. Before I can draw, a short trot results in the distance being increased to 60 yards, a shot I take in practice all the time, but I’m a bit more rusty than I care to admit to take the shot on unwounded animal. I REALLY want to do this with a bow but I tell myself “Know your limits, make the ethical decision”.

So I ask my wife to take my bow and hand me the Blaser, and spin my release 180 degrees on my wrist so it doesn’t scratch the beautiful wood or, worse yet, interfere with a good grip and accurate shot. 92 yards now. The safety is pushed forward, cocking the rifle, while I simultaneously and instinctively turn the magnification ring with my left hand. Back to a steady position, 3rd one back is the bull, quickly analyze the angle of the shot and imagine the location of the opposite shoulder and squeeze the trigger. As the .470NE thunders, I recover from the recoil quickly and am surprised to find the bull still standing, although having moved a few yards and an obvious red spot showing on his white hide. I ask the guide “again?” even though the bull doesn’t appear to be going anywhere anytime soon and it was surely “enough gun”. Just as he answers, I make the decision myself that I have a 2nd barrel and ammo is (relatively) cheap, there’s no reason not to spare the animal even a single second of pain.

It appears that this particular Bowtech will have to wait until Africa to harvest its first animal, but I finally have my Scimitar Horned Oryx bull. The measuring tape won’t tell you that he is anything special, but we all know that the measuring tape only measures inches. He is beautiful and certainly special to me, its been a many year journey and not an easy hunt. My double gun that longs to be in Africa has taken an animal whose ancestors once roamed the Sahara. Believe it or not, the bull fell exactly how the pictures were taken, like he knew that only the traditional “Africa hunting picture” pose would do for this moment.

Beautiful rifle and one fine trophy! Thanks for reporting such a unique trophy! Sorry the bow didn’t work out...next time!
Africa on my mind.

Nice Scimitar. I got mine in 2017 in the Texas Hill Country with my 300 winmag Supergrade at about 110 yards. 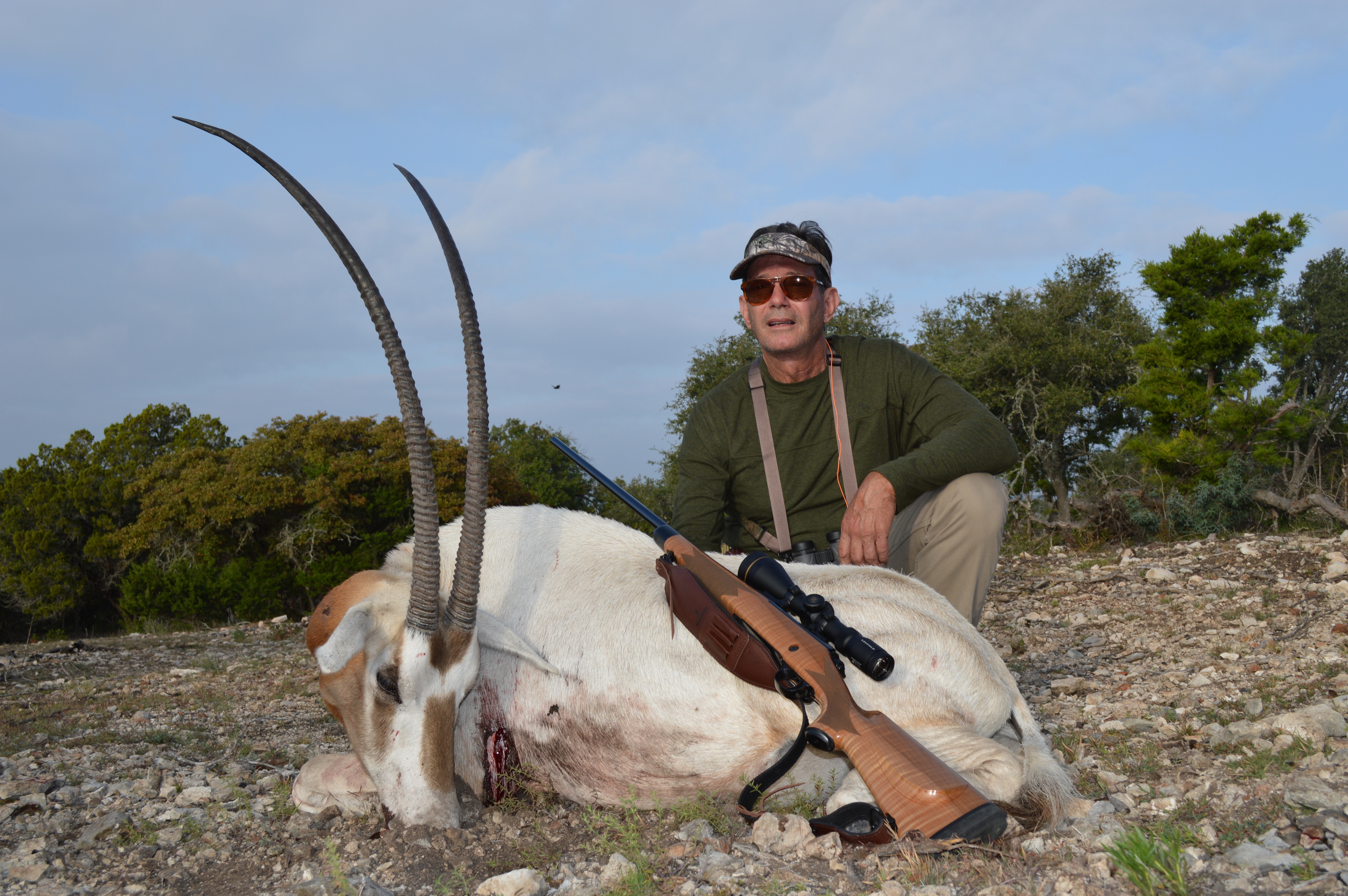 chashardy said:
Nice Scimitar. I got mine in 2017 in the Texas Hill Country with my 300 winmag Supergrade at about 110 yards.
Click to expand...

That's a big one, belated congrats!

Congrats and thanks for sharing!
John 3:16
M

Thanks everyone, I cant wait to post my first report from Africa...anxiously awaiting the adventure!

Congrats on your hunt!

Nice bull and nice on the plate as well.
You must log in or register to reply here.

USA: BOW HUNT: My First Bowkill In Many Years