I'm going to take no transmission for the last couple of hours as a good sign. I wish for you that this trip is so good that the last two days are only a fading memory. Good luck Royal.
Clayton
There's just something about Walnut and Old Iron.

Which I have discovered doesn't mean as much as I thought it did... will feel better in about six more hours....
HUNTERS make importation bans work!

About the right time for a good nap.
Clayton
There's just something about Walnut and Old Iron.

Good luck Royal, all will be forgoten when you arrive on African soil.

Made it and guns and baggage did too. So luckier than @buddy48 in that regard.... I did text with him and he was hoping his stuff would arrive tonight.

On the way to camp and have maybe three more hours. Then it is time to find a baboon to see if my rifle still works.
HUNTERS make importation bans work!

Three hours to go......I expect you to have the honey badger in 4 then!

Glad you made it, look forward to the updates!
John 3:16

@Royal27 Hope you have a great safari!

We heard about the flight troubles in SA and actually had some of the canceled DL201 flight people packed onto our flight on Friday.

Well I'm back at Tambo with a couple of hours before flight. Will try and work on report some on flight. I didn't have time over last two weeks. Bossie wouldn't let me sleep and @Tootabi Valley Safaris and I talked all night when not hunting.

Suffice it to say I had an amazing time. Trophies were all excellent, but more importantly the experience was great with both gentlemen. Not having a list works for me. No pressure put on myself by myself and I just took what came. I got some animals I wanted, added a couple, and missed out on some. For me personally, that's the way it should be.

As some of you have seen in other thread I didn't get the blue duiker. We saw them, but they were small and we were picky. The weather didn't cooperate either, but that's hunting!
HUNTERS make importation bans work!

Alright, I can't wait - did you get an ostrich?

I did not.... saw some on last day but didn't get an opportunity at them.
HUNTERS make importation bans work!

@Royal27, quit reading everyone else's post and start working on this one. I'm ready to see some night critters!

Have a great trip back, look forward to the report!
John 3:16

After the two day delay the rest of the trip was uneventful. I did end up with a middle seat (both ways...), oh joy.... At any rate, th entire Mostert family was waiting at the airport for me when I got there, Bossie, Henriette, and their eight year old son DJ. Since Bossie was picking me up I didn't use a rifle service this time and all went well and we were out quickly. The drive up north was just over four hours and it was pushing midnight by the time we arrived at the place we were staying.

To be closer to the hunting and the Badger bait in particular Bossie suggested we stay at what I'll call a little cabin as opposed to the traditional lodge. It worked great for the four of us, although Henriette often went back home as it wasn't that far.

So day one was to be for getting additional bait down for the badger in particular. The weather was rainy and windy though and nothing was moving, at all. We saw giraffe and that was about it, other than a monkey, which was promptly shot. If anyone is wondering, a .300 WSM is enough rifle for a monkey. Yikes.... Finally got a small impala female down late, after I blew the first shot. So there was some bait to put up for the next morning.

We got into the badger blind just before dark even though the badger hadn't been there the night before (brown hyena, bushpig, and leopard had). Since nothing was happening and the badget had been showing up early we only set until 9 PM or so. The rest of the evening was spent spotlighting and calling for jackal. We did have a jackal coming in, but the wind busted us. With the spotlight I did manage to get a porcupine as they are shoot on site animals and Nancy wanted more quills. So done. A couple of genet cats were seen as well, but no shot possible. 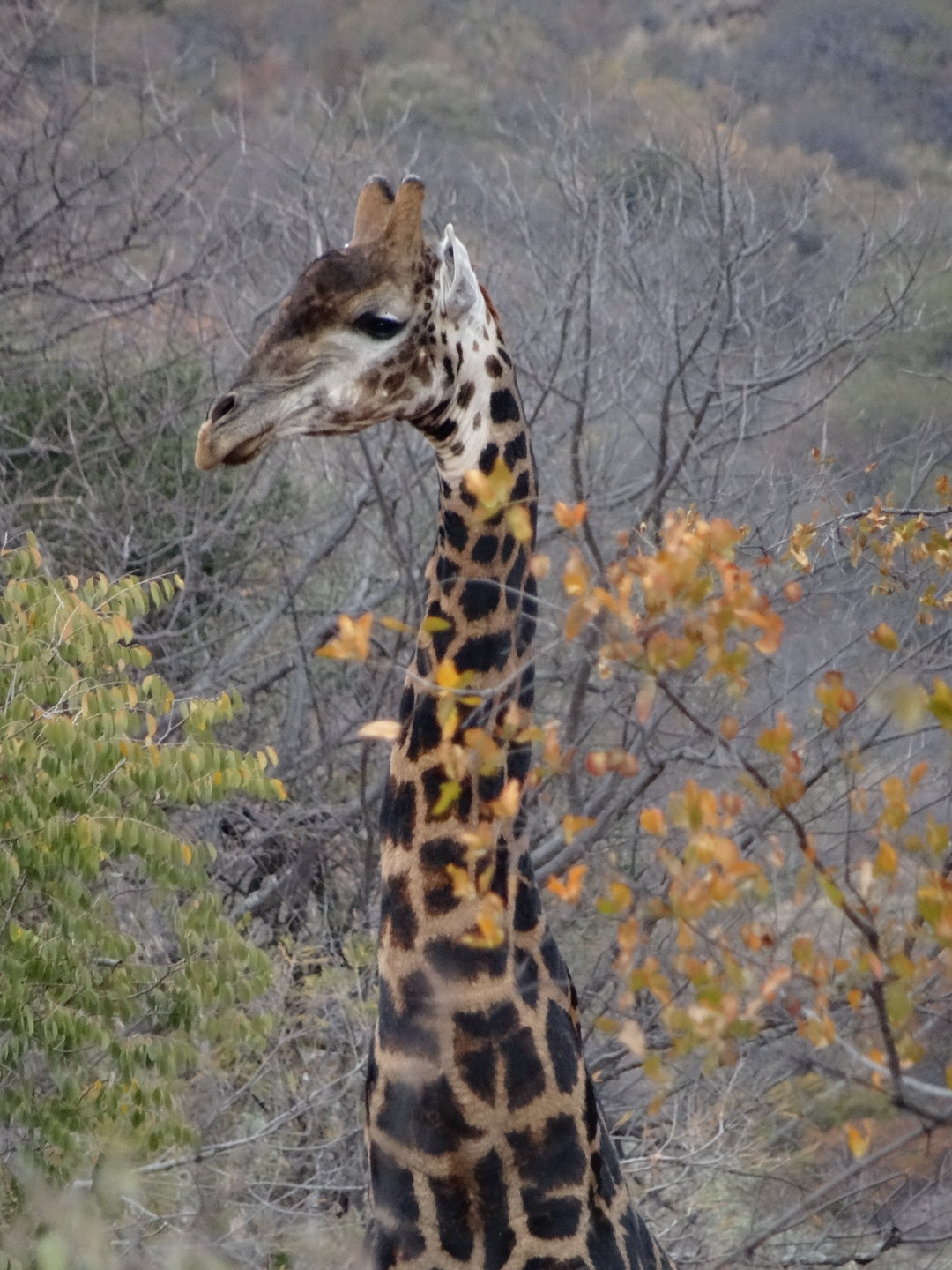 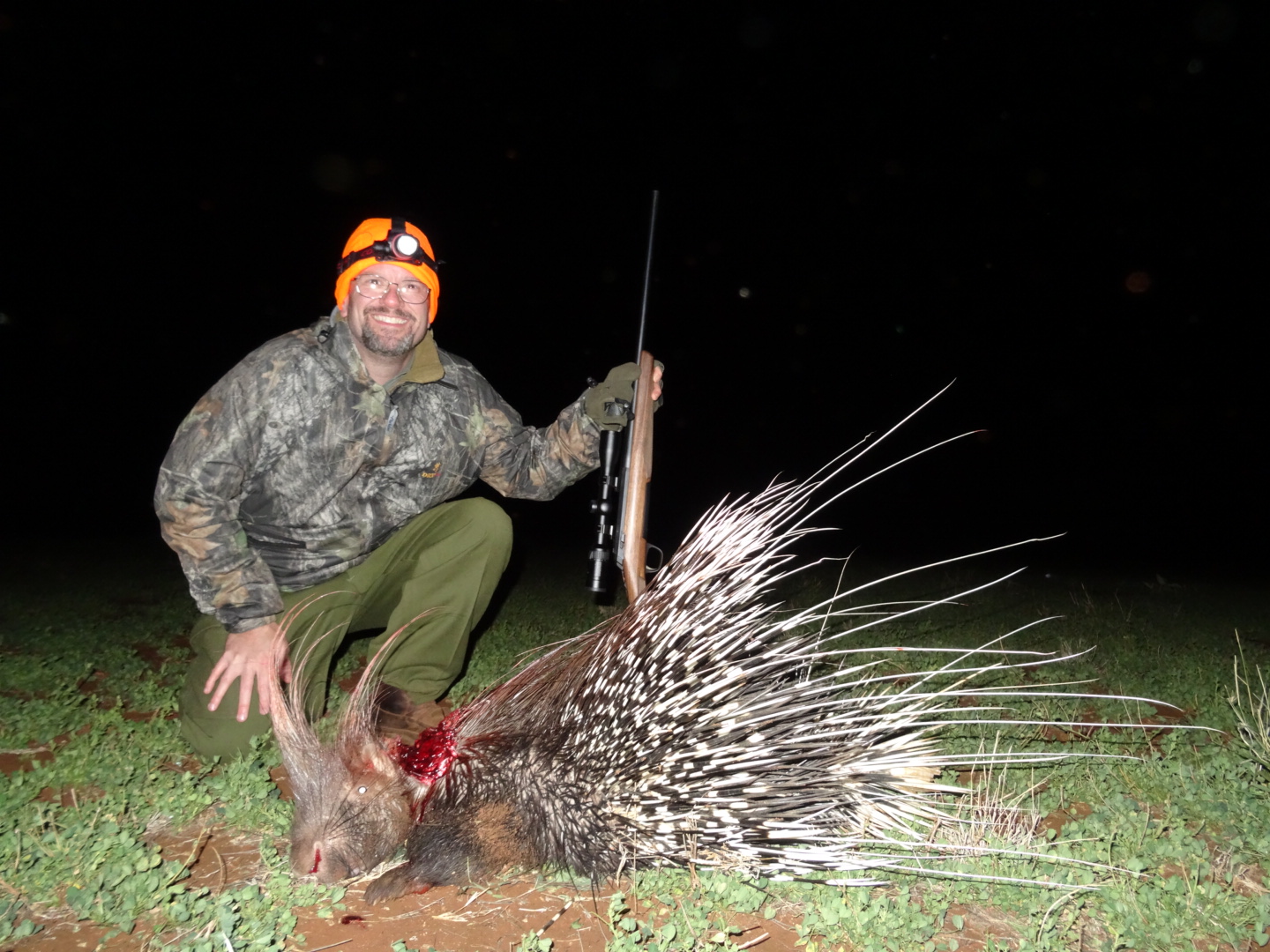 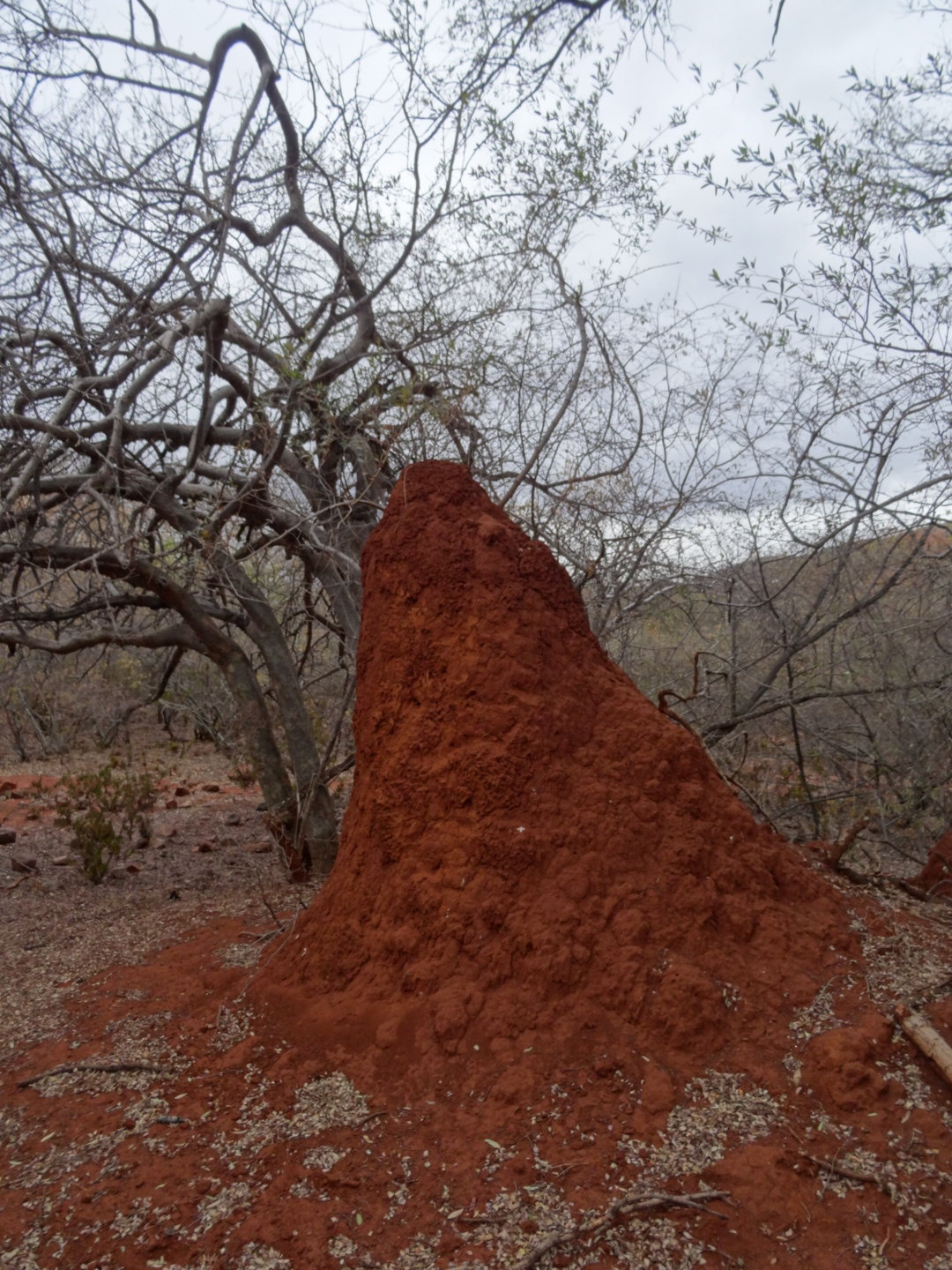 And a track from that silly nuisance animal. 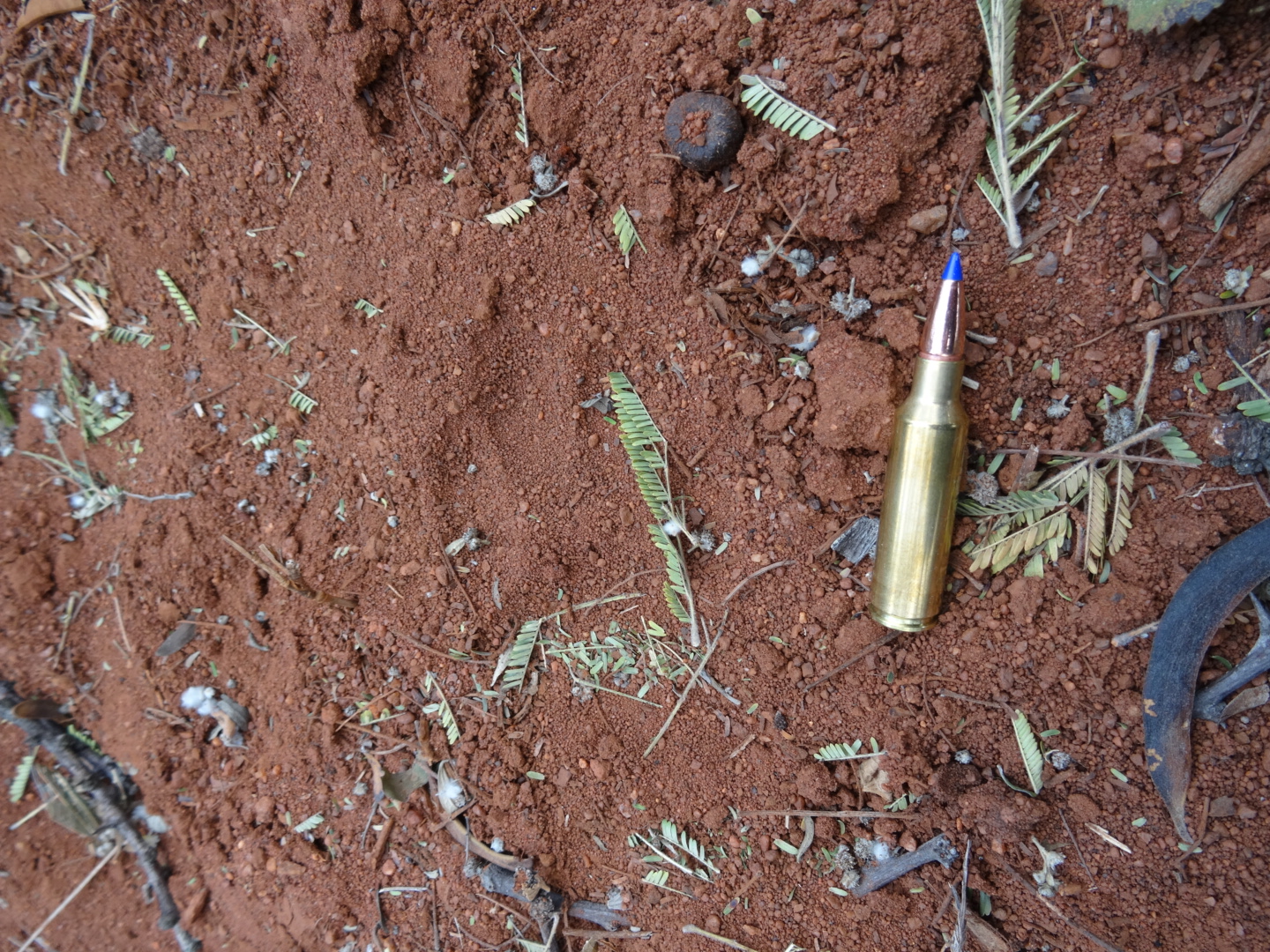 More of the same with the weather still not cooperating, but what are you going to do??? You hunt, that's what you do! We did some walking as well, but didn't see anything of real interest. I did manage to miss a long shot on a baboon (see a pattern here with my shooting??? It didn't get better.... By far the worst shooting I've done in Africa, not even close...) Some kudu and other assorted animals, including more giraffe. Man that place is loaded with giraffe.... Some really nice and dark old bulls. I'd like a giraffe someday, but not this trip. If anyone is interested Bossie has a great price on them for sure. At any rate, the day hunting ended fairly early as tonight was bushpig night and that meant about an hour drive. So off we went!

We were in th blind before dark and these pigs had been coming in fairly early and this night was no different. Just after 7 and we heard them coming. Pigs aren't quiet animals for sure.... A mature boar and sow came in and no one needed to tell me which was which. Then as quickly as they came, they left. I thought I'd blown it waiting for the pig to turn, but within 45 seconds they were back. Seems to be pretty common for them to do that? When they came back it was a hard quartering shot and bang flop. Beautiful red in the pig and a shoulder mount won't do him justice, but no room or budget for full body mount... Regardless, I was thrilled. We drove around spotlighting some more after that but nothing of interest that presented a shot. I am learning to hate genet cats by this point though.... 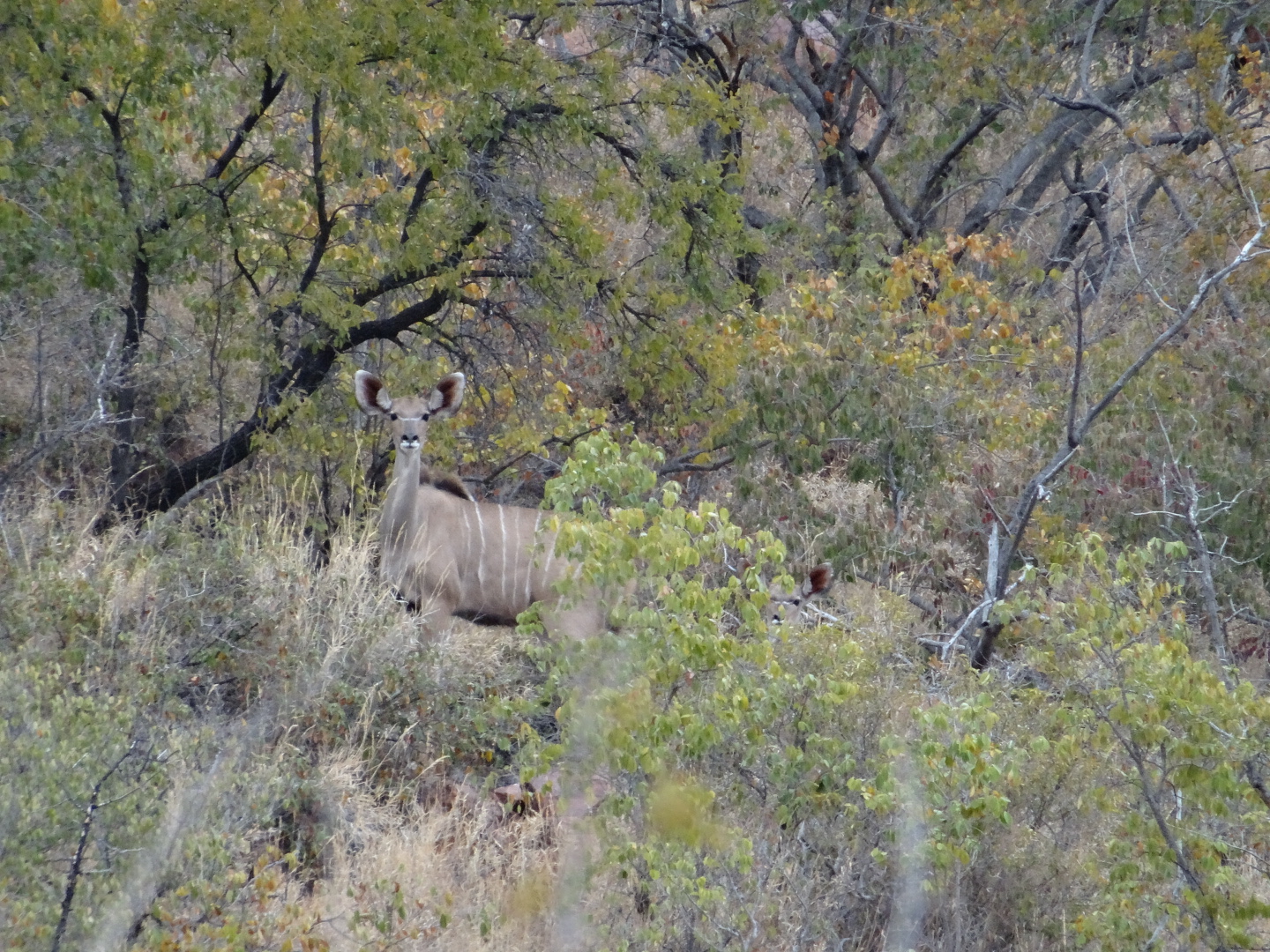 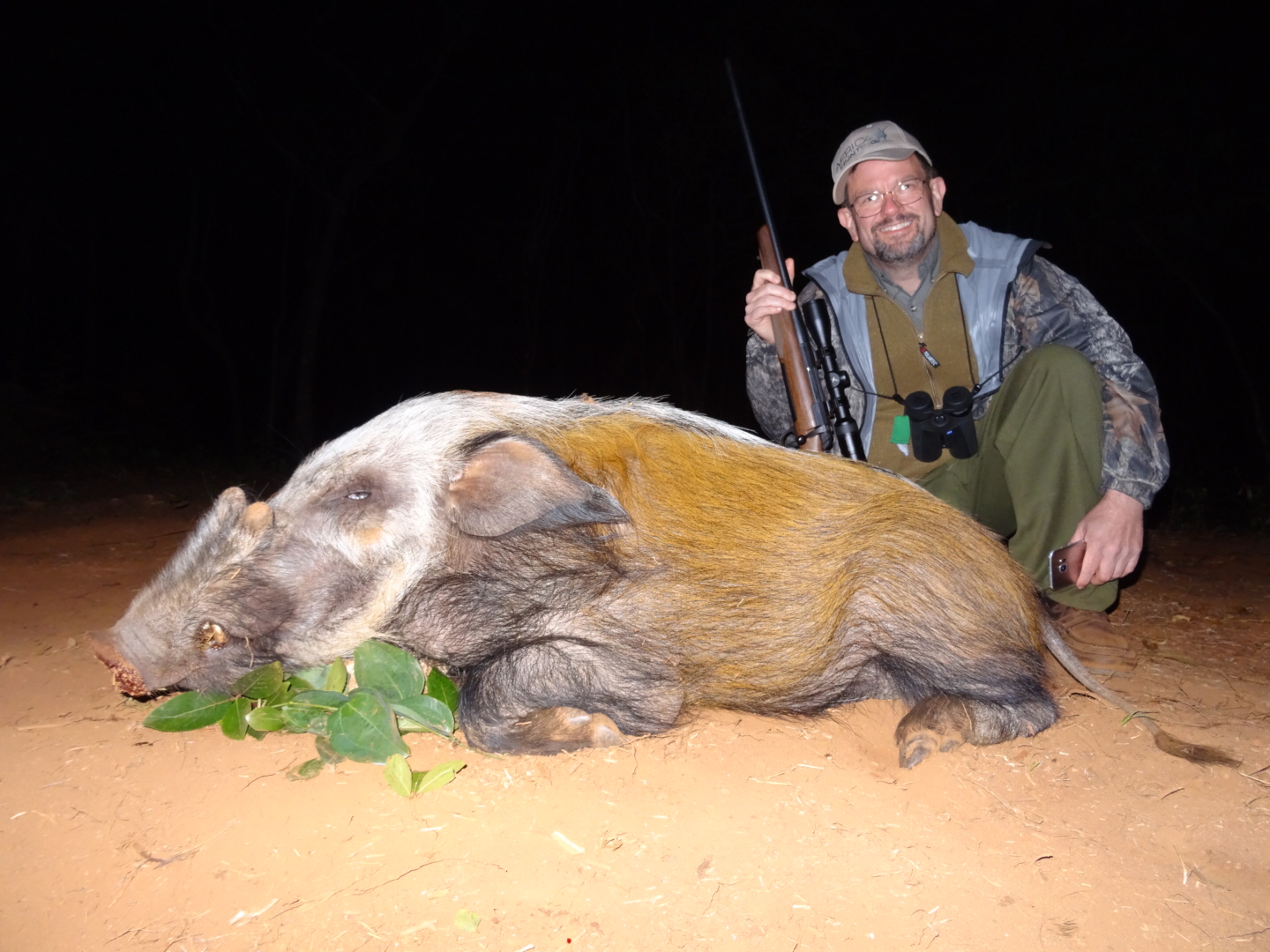 So here is what I really liked about the badger hunt. It really was a "poor man's leopard hunt." Same motions, go check baits in the morning, add meat where you need to, and check trail cameras. Bushpig it seems that folks know when they are coming in and I think once you get badger on bait they do pretty well too, but we had one that had left bait, so it really added to the hunt. We actually even had to add thorns around bait to keep the leopard and hyena off. Most guys would kill to get a leopard on bait and we are trying to discourage a big Tom from feeding. Go figure....

I did bang flop a couple of baboons including a really stupid one who sat and watched me get out of the bakkie from a hillside. He's out of the gene pool for a reason! I also missed another one, but long shot again so didn't feel terrible.

The badger had come back, so time to sit again. After seeing what my WSM was doing to animals, including the bushpig we decided that I'd use Bossie's 7x57 on the badger, with night vision. The night vision was pretty interesting as it goes over your scope and you see the cross hairs in a small screen. So you shoot with your head up, which is different. Its almost like a video game.

So we sit. At just about 10 PM I'm looking at the bait with normal binoculars (lots of moon light) and think I see movement. Almost like a shadow flickering, no shape, just movement. I whisper at Bossie for him to look. He whispers back after a minute or so that he can't see anything. Then I see it again. Eyes must be playing tricks I think.... And then a crunching noise. Kind of like ribs being cracked by strong jaws. And then you could see him. The badger was eating away.

The night vision was switched on and I could see him on the screen. Gray looking and dim, but plenty good to shoot. So I lined up the cross hairs and squueezed off a shot on what Ithought was the middle stripe. He jumped but didnt drop and then another quick shot and silence. No noise at all. We went and looked but no badger.... Bossie decided we'd come back in the morning and look more, but didn't want to mess up any tracks in the dark.

So off spot lighting we go and stayed out half the night. When we first get to the Macadamia nut orchard we do see another porcupine. So I take out my frustration on him with my shotgun. As soft as they are a shotgun isnt the best weapon for them for sure. The quills make great armor against the pellets...More of those confounded genets that don't give a shot and we see and chase a big civet cat who also doesn't give a shot. I think we stopped around 4 AM? Maybe a little later?

Then waiting to see what happened to the badger.... 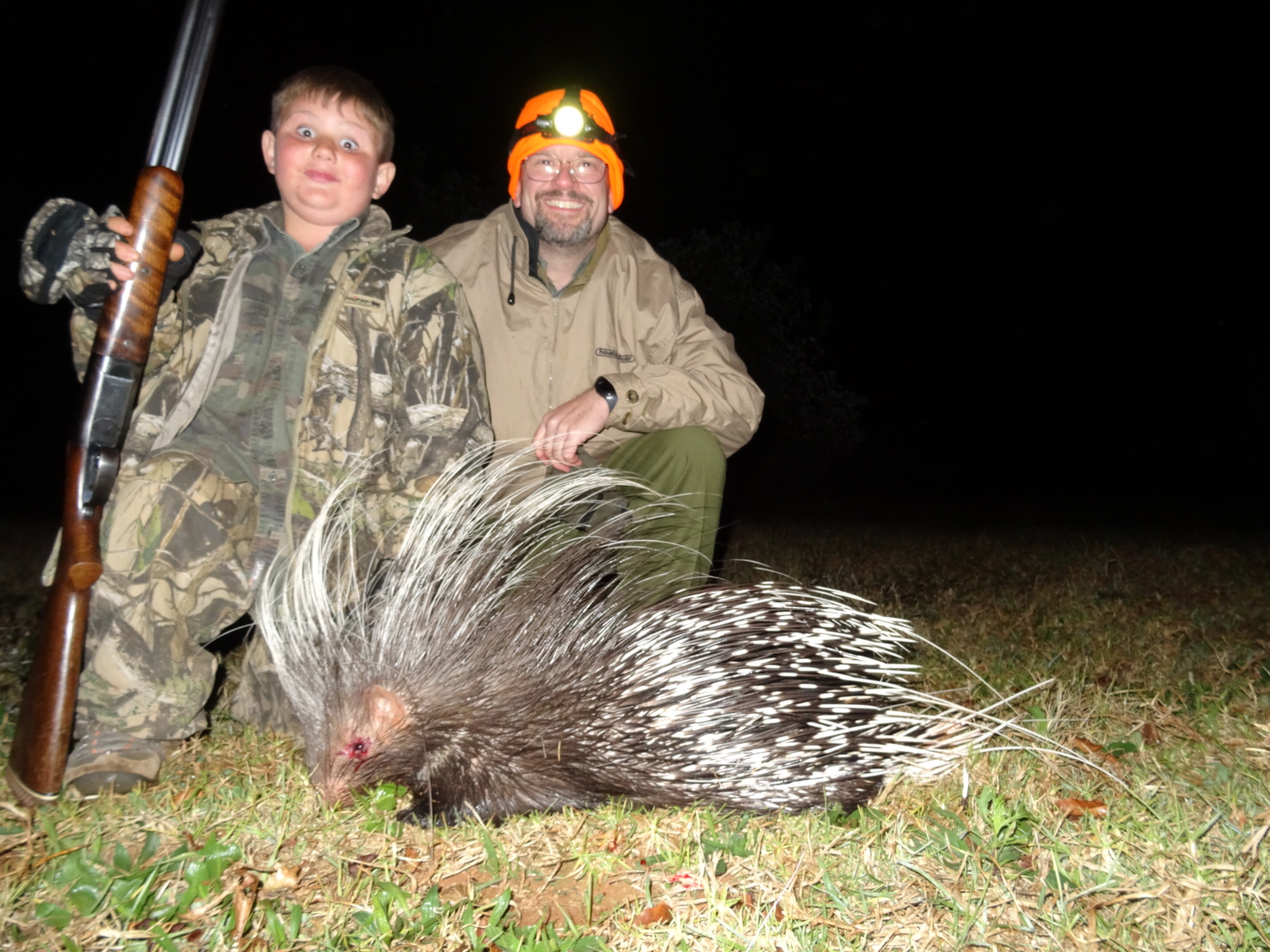 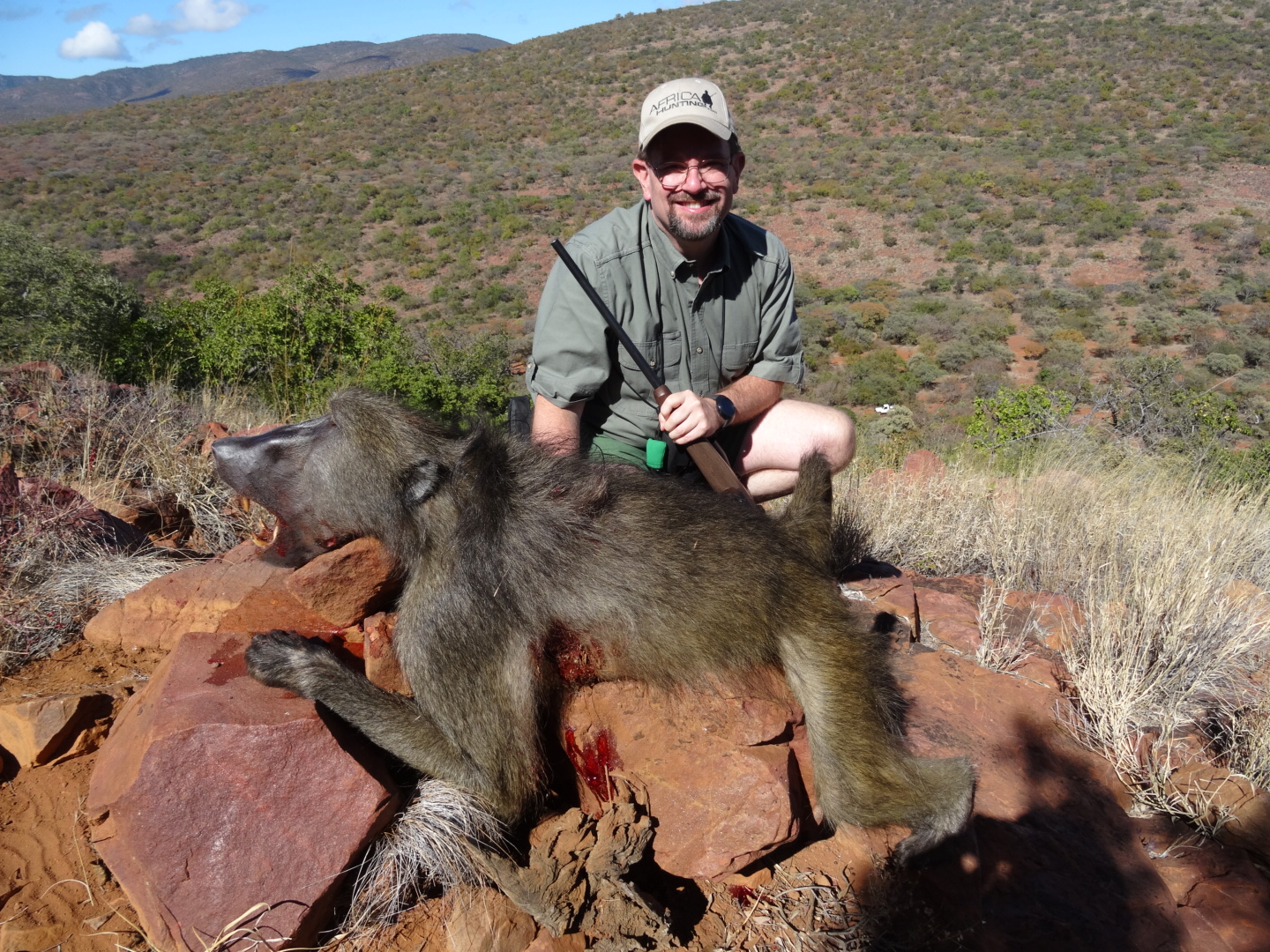 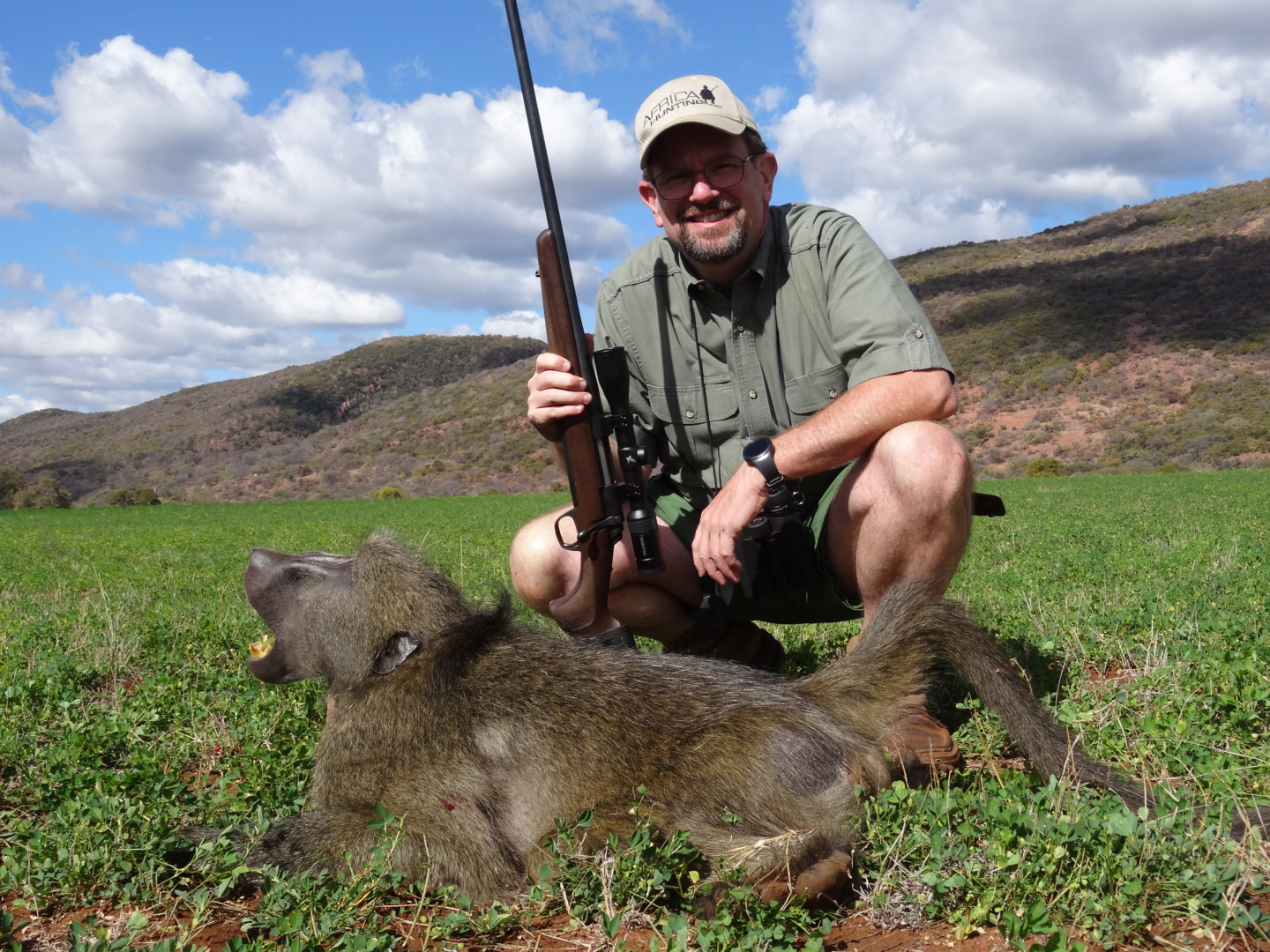 Looks like a lot of fun. Is that a TTSX you have loaded? Thanks. Bruce
You must log in or register to reply here.