I have been very fortunate to get to hunt at Spiral Horn Safaris the last 3 years. In that time I have made a lot of good friends, and had a great time. 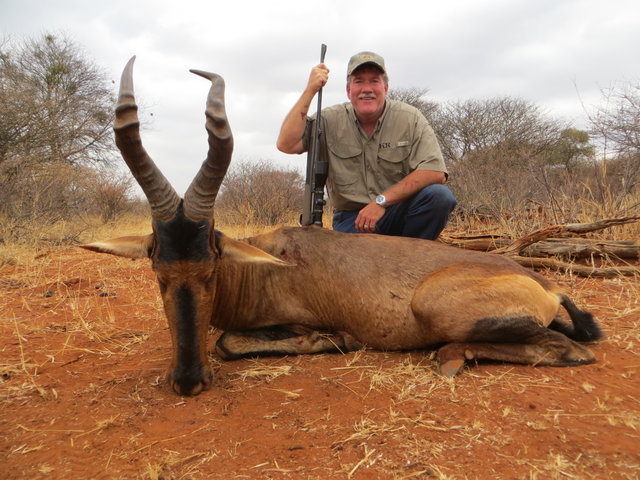 I have found in life ã€ou have to bet a lot. You bet that you can work hard enough to make a good living and put a little away, you bet you donn't get sick and stay out of the doctor'sï½´office, you bet that folks will take care of your kids, money, and a whole host of other things. Then we go to places like Vegas and bet even more! I never could understand that one. Well the last thing I want to bet on is a good hunt!

Well this trip started on a bet at DSC. Two of my good friends in business looked at my trophies and picï½´s and said boy that looks cool, I love to hunt I just don't have time! I was talking to my friend Frank and he said if you get Jeff to go I will go? That was all I needed?ç´³fter Louis got thru talking to Jeff a deposit was laid down then Frank was on the hook! One bet lost! Well, they both looked at me and said you are going right? I said why not! Well my wife was not to happy, not because I was going on safari--it was that she was not getting to go. My wife went in 2011 and loved it! She would go back in a heartbeat!

Well Turns out this hunt was full of bets bï½ut no true losing hands would be dealt.

Sept came around--and it was time to be off,after a 17 hr flight we all were pretty beat, Louis had arranged us to stay at the Elegance lodge and it was very comfortable. After a few drinks and a super meal, we turned in for a nice rest.

We woke up refreshed the next morning, and off to our 3.5 hour drive up to Spiral Horn camp. We arrived in time to guess what---EAT---Tootsie is a gem at camp not only is she a first class chef but is a barrel of laughs.

After the meal ï½¡e shot our rifles in. Jeff used a Mauser M03 Syn stocked 300 win mag, and Frank used the M03 in a wood gun in 375 H&H. Frank really like the thump that the 375 H&H This was Frank's first large bore gun. He also really loves his M03 and the versatility it provides. We have dealt Mauser, Blaser, Sauer, and Steyr for a long time. The versatility of the Blaser R8 and Mauser M03 system is really unmatched for the traveling sportsman. I have hunted all over the US and Africa and I can tell you a take-down gun is nice. However I used my custom Bill Wiseman TSR rifle in 375 RUM, man I wish it took down like my R8ï¼£ï½ut it is one of my most accurate rifles and was just begging to go.

Well that evening something happens--and it happens only in hunting camp--and where men gather. Bets started to surface, who would draw first blood. Who would see the most species...ect---even the damn PH's where in on it! Well two major bets were made.

1. Louis said that he and his client--Jeff-- would blood first. If I scored first he would take a dip in the ice cold pool! Let me tell you from experence...it is cold!!!!!

2. Since Jeff and Frank were newbies, and I love hunting impala, who ever took the nicest impala got to pick who got to eat the fries---(aka NUTS).

Well the first bet did not take long. The second morning was just getting the newbies broken in. Lots of driving, stalking and looking, Louis hunts 5 farms in the area that are about 30,000 ac in total. Is it fenced? Yes. But, there is plenty of room to roam! Well Peiter and I happened on a nice heard of Red Heartbeest laying at the edge of the road about 400 yards from us. There were 3 good bulls in the heard and tried to pick out the best one. We put the sneek on them and got with in 255 yards. One 300 grain Hornady later and we drew first blood!!!!

Well with one bet down time to focus on my other things like a monster impala, Waterbuck, Eland and Kudu.The next days were spent looking and stalkingè›¯ï½ut the next to strike was Frank. He and Donie had spotted a nice stallion Zebra. They made an excellent stalk and Frank put the hammer on him with his 375.

Well over the next 2 days I saw everything. I shot a wonderful 31.5 in Waterbuck, a Huge Livingston's Eland that weighed well over 2,000 lbs, and even a big bushveld cobra that we scared the hell out of every tracker we had, but no impala soo-- Nuts for me!!!!!!!!!!!

Frank finished his hunt on day 6 with a great hunt for a Blue Wildebeest. Frank really did not want to hunt wildebeest but after sessions around the campfire we talked him into it. It was his most exciting hunt of the trip!

Jeff also during this time shot some really nice animals--He scored on a nice Zebra and Gemsbok.

He also scored on a super Red Heartbeest. Jeff hit him a little far back--but Louis trackers Robert and Jotom tracked him down. Louis little dog hammer ended up finding him--It was awesome to watch little hammer and the tackers work!

The end result of the trackers and hammers hard work!

Jeff also finished up with a top shelf Eland on the last day--in the last hours!

As a side note I had the worst proformance out of a bullet I have ever had. I used Hornady interlock 300 grain bullets out of my 375 rum. I had to shoot my Eland 5 times. Pen. was less than 12 inches in each case and the heaviest bullet recovered was 138 grains--not good--Im going back to barnes and swift to shoot big stuff.

We enjoyed every min. of our time

And plenty of bev. to make bets!!!

But in the end I think we as a group wore the guys out!!!

All bets aside I was one pleased customer!!

Hey all in all--their is no risk with picking Spiral Horn Safaris-- for a good honest South African hunting experence, but I will bet you that Frank and Jeff will go back to Africa. Anybody want to bet????

thank you for sharing with us..

NICE WRITE UP! THANKS

Congrats to you guy on a fine hunt thanks for sharing.
Enjoy Life Now! It has an Expiration Date.

Thanks so much for sharing. Sounds like you had a great time and harvested some nice trophies!

Glad to see Louis is honest to his word and got his dunking and took it like a man.

Congrats to you all.

Thanks for this enjoyable hunt report and pictures!
Jerome Philippe, Founder of AfricaHunting.com

Congrats on your hunt, it looks like you guys really enjoyed yourselves !

And thanks for sharing.
B

Member of
SCI and PHASA

Thanks to all for the nice comments it is always appreciated!

Ed I feel a fishing bet coming on for January how cold is the water in Corpus Christi in January ha ha.

Thanks for the hunting report and pictures!

Great report and I cannot wait to get to Louis's place to hunt again next year, awesome guy and all his helpers are the best, except for one unnamed Ph that cannot hit a note but tries to be a singer he better stick to what he does great PH, lmao, I still dream of the sunrise on that hill.
W

Fun to to read and nicely accented by all the pics. Good job.
5

Thanks guys for all the nice comments. I will miss not going to Africa this year--but will make it that much sweeter when I get back! Hey Louis it has been warm here so it might be a pleasure to take a dip!!! I hope the fishing is good!!!
You must log in or register to reply here.
Share:
Facebook Twitter Reddit Pinterest Tumblr WhatsApp Email Link