This will be a different report than I normally would write as this was a different hunt for me in comparison to past trips.

I made my first trip to Africa in 2010. Like most of you I was already planning my next before I got home. There was no doubt in my mind I wanted to get my friend and hunting buddy Kevin, aka @AZ KJ , over with me at some time. That effort started immediately, but only in this last year did we set plans for a trip this year.

Since that first trip, I have been over for three other trips with Jacques @JKO Hunting Safaris and taken quite a variety of plains game. To the point that I’m trying to just fill in a few holes with game I’ve taken and/or improve on any I have. So this trip was scheduled with no real list for me me, but a first timer’s list for Kevin.

This was fine by me. It is quite enjoyable to watch the first timer be exposed to Africa and see that person take their first game there. We would for the most part hunt 2x1 during our 10 days in South Africa. And our time would be spent in two different locations.

As you may know, Jacques @JKO Hunting Safaris started his own company this year. He has secured hunting properties in a number of different locations across South Africa. We would hunt in two of these locations.


Sandy Mount
This is the first property we would hunt and is located in the Free State of RSA, roughly an hour and a half south of Bloemfontein close to the town of Fauresmith. The Free State is known to be mostly flat and I would concur with that having seen much of it from the road. However, this is not the case for Sandy Mount. It is a property with many steep and fairly tall mountains with fairly flat savannas in between the ridges.

The hills are more/less brush covered with the savannas open but covered in tall grass. This allows for easier spotting of game, however it also allows for game to easily spot trucks and hunters. The latter resulting in having to carefully plan a stalk.

There are two lodges at Sandy Mount. The first has enough bedrooms to support a fairly sizable group. It is simple but welcoming. The lodge has a nice bar/living room/dining room setup that feels very homey. There is a covered patio out back and a pool. The area out back has a lawn which some of the nyala take advantage of.

The second lodge is a former farmhouse. It will hold fewer people and is perfect for a family. It is as mentioned a house and as such feels this way. It also has a nice patio for relaxing and eating meals outdoors.

Sandy Mount is a high fenced property that has roughly 38,000 hunt able acres. The property is privately held by a family that wants to use hunting to manage the animal population. The day to day operations on the ranch are handled by Vella Brink who mostly attends to the wildlife. Vella is a PH who also at one time worked for Nature Conservation for RSA gov't. We would hunt for the first couple of days with Vella. He is a wealth of information and a fine PH to hunt with. And then there is Rykie Fourie. Rykie is a very pleasant and personal young lady who also happens to be a wonderful cook. She is also quite the equestrian. The ranch is also used for Rykie's love and business of raising Arabian horses for endurance racing. 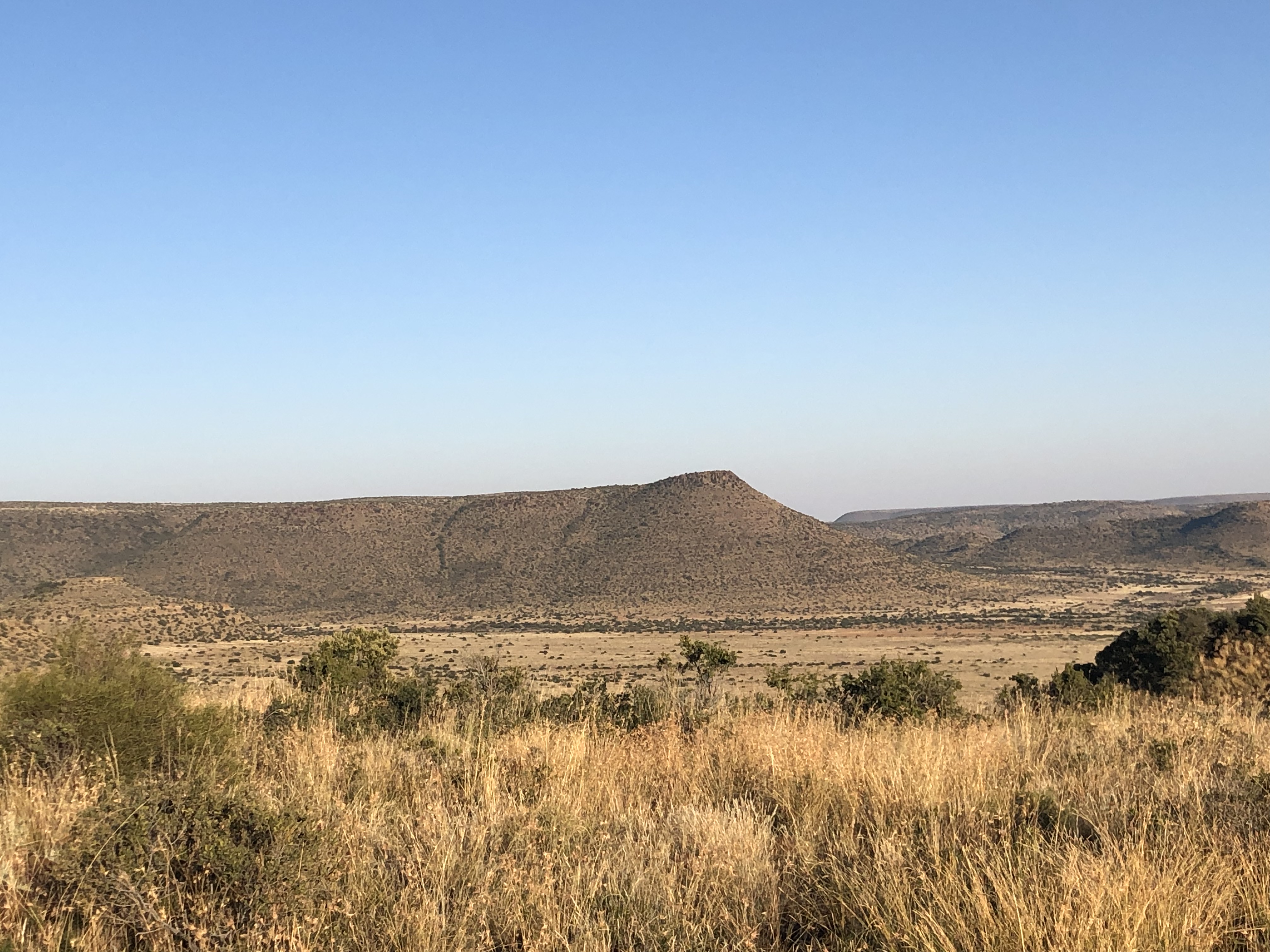 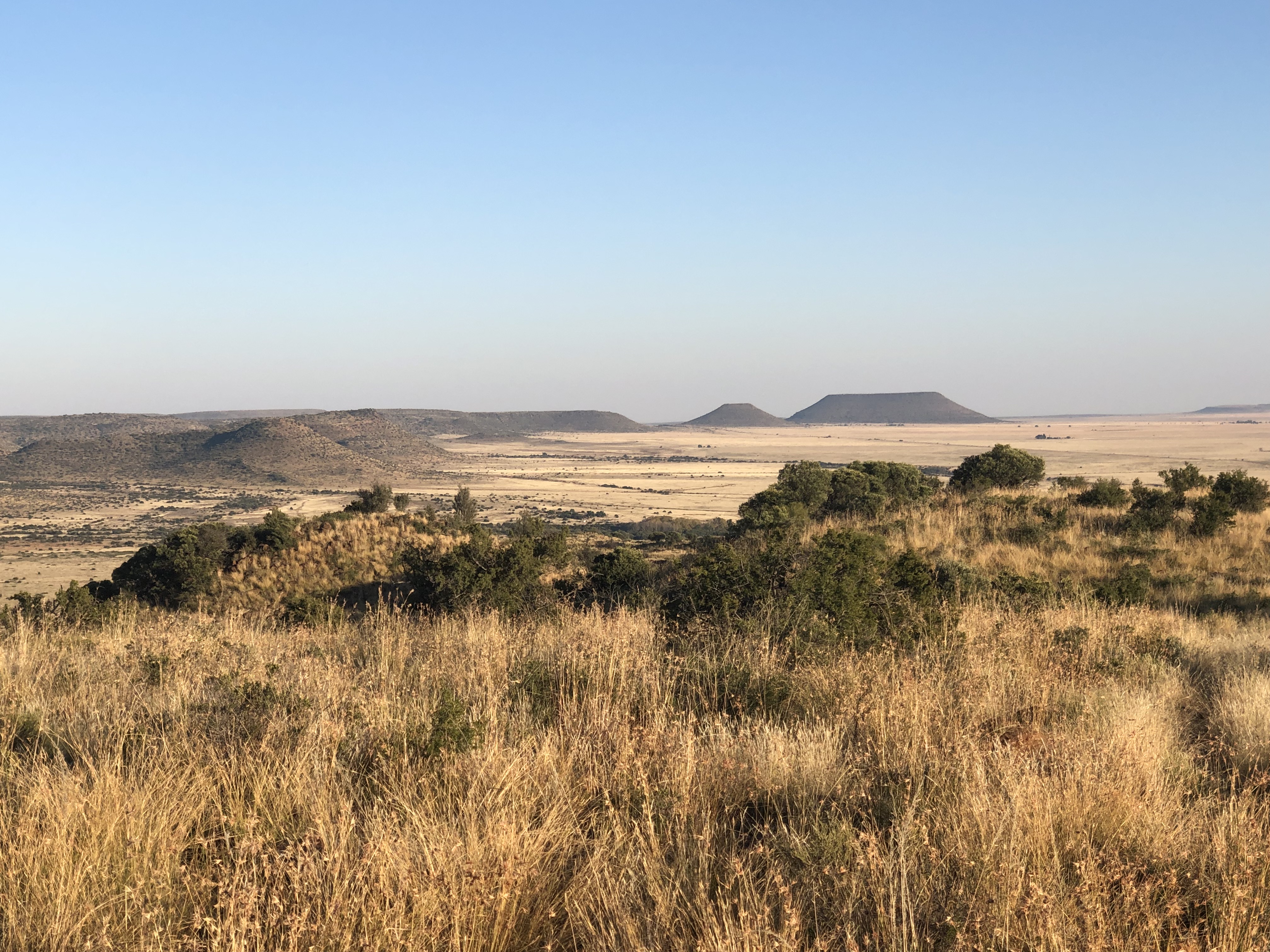 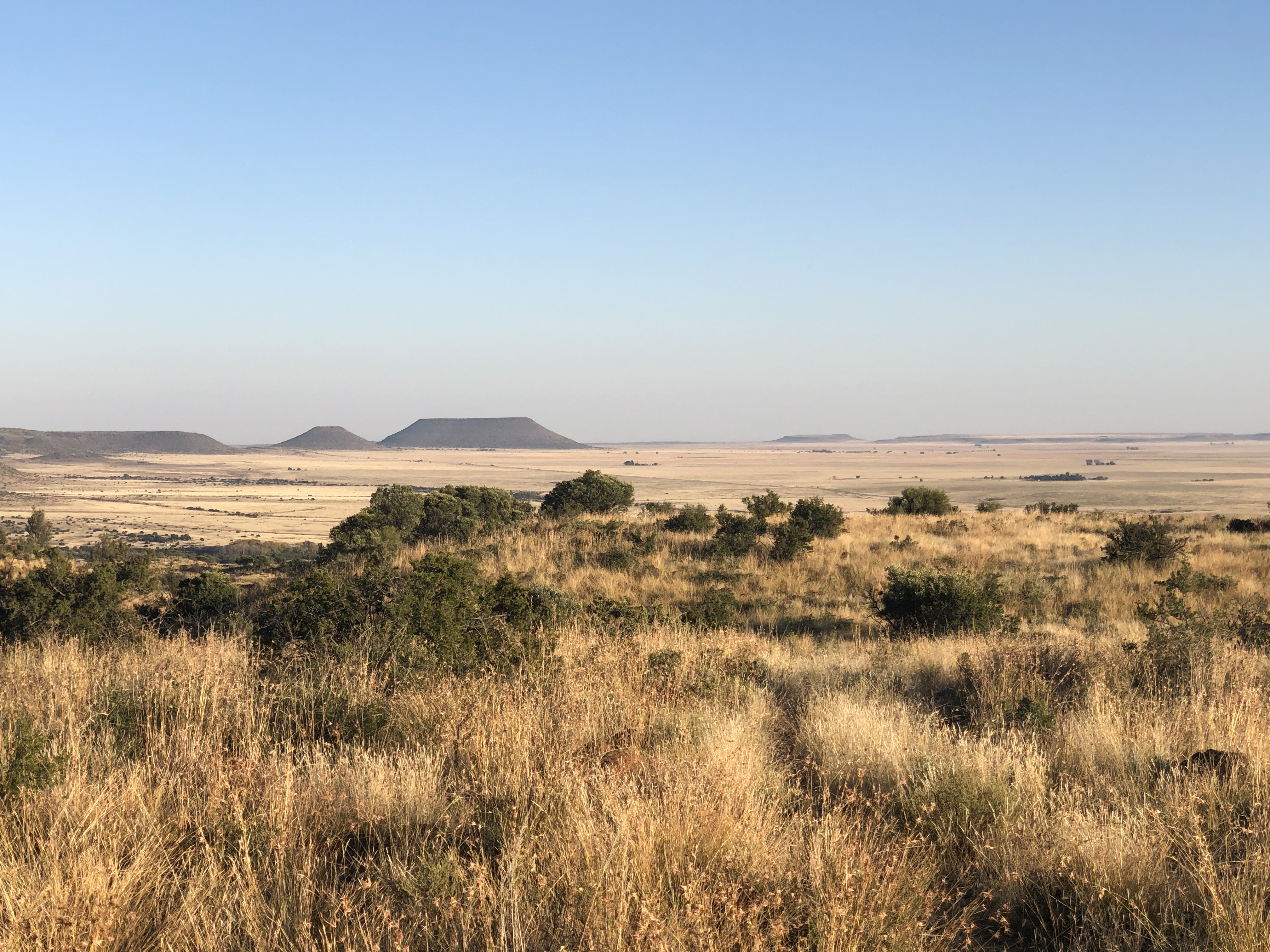 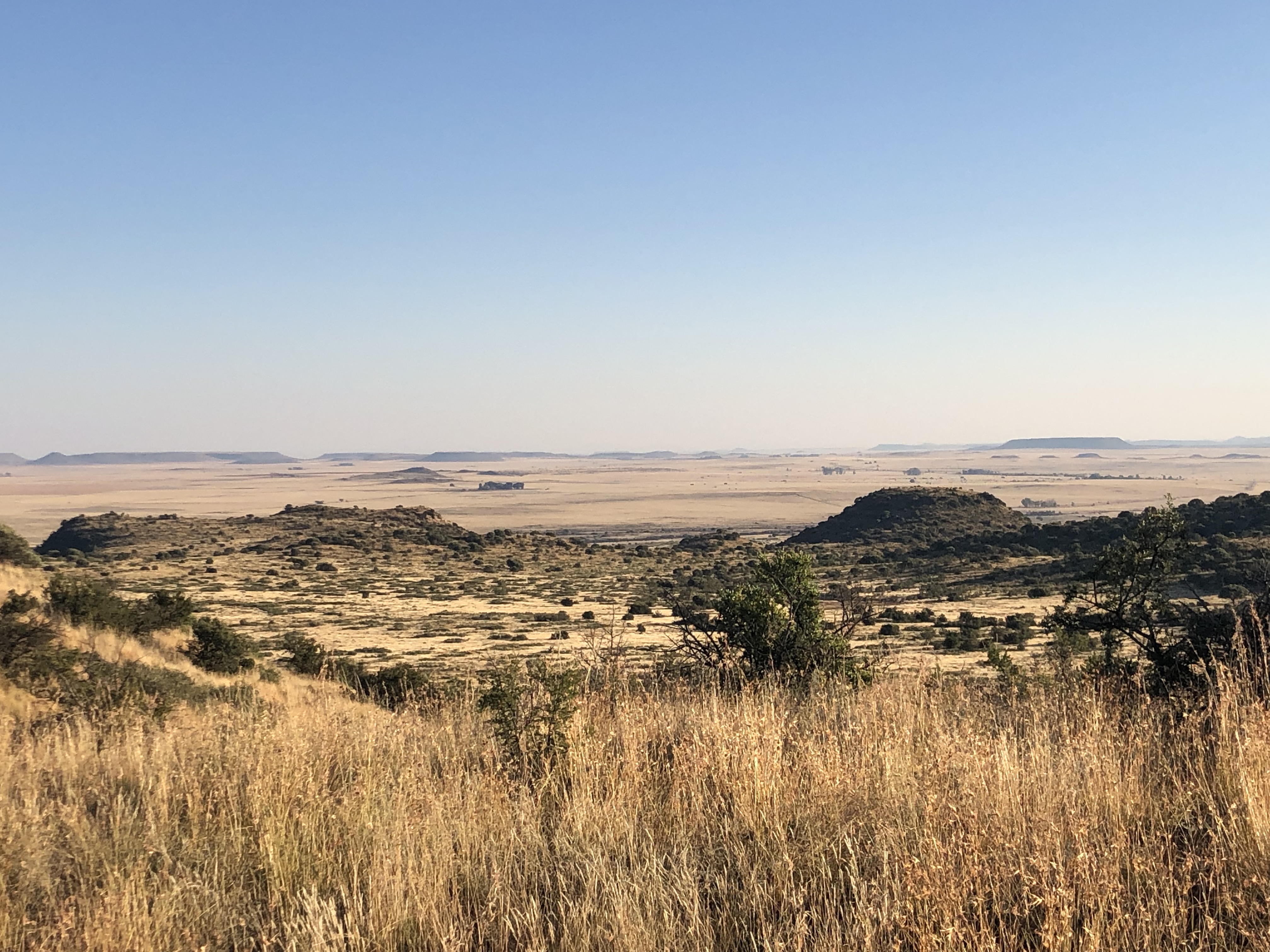 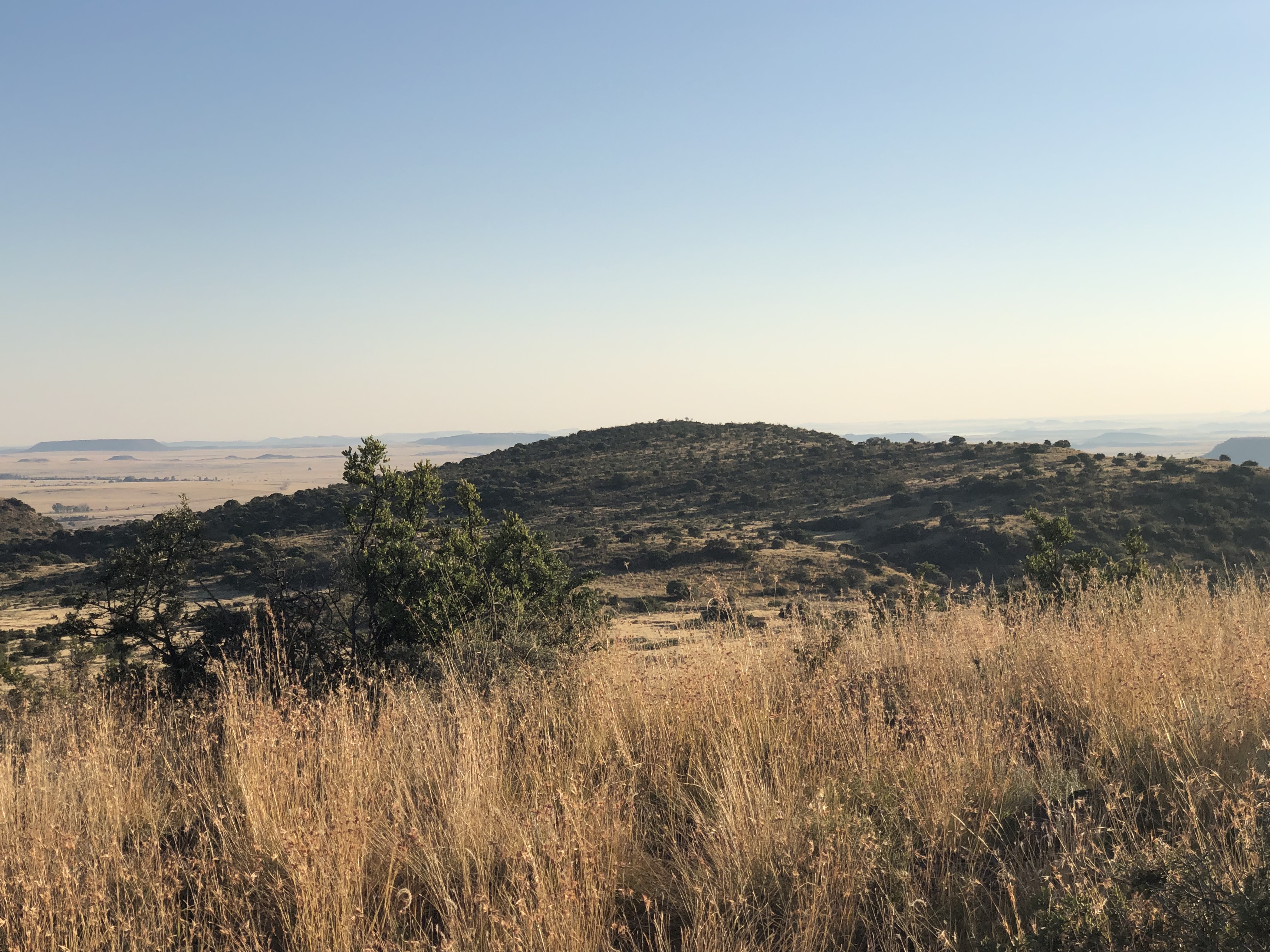 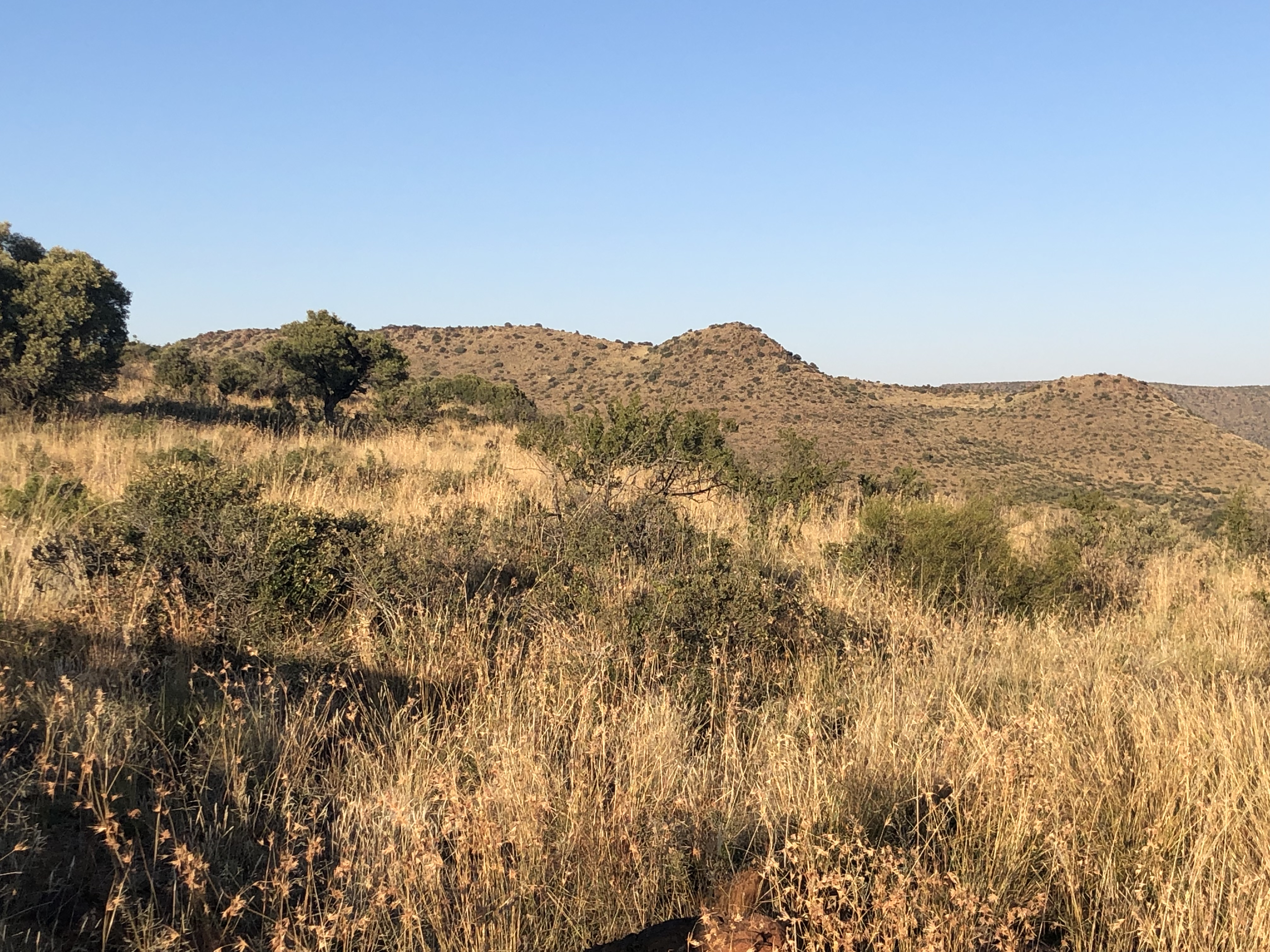 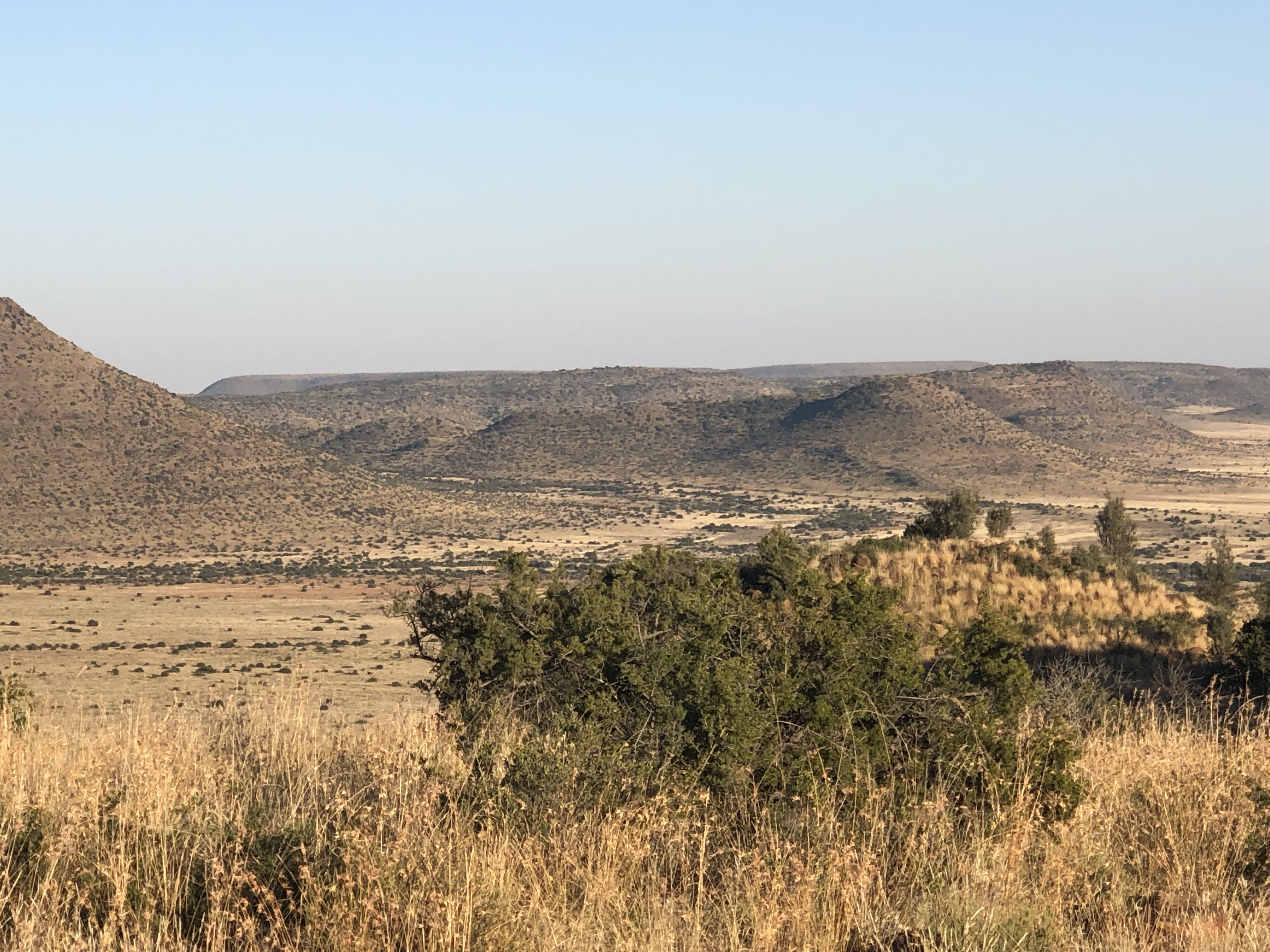 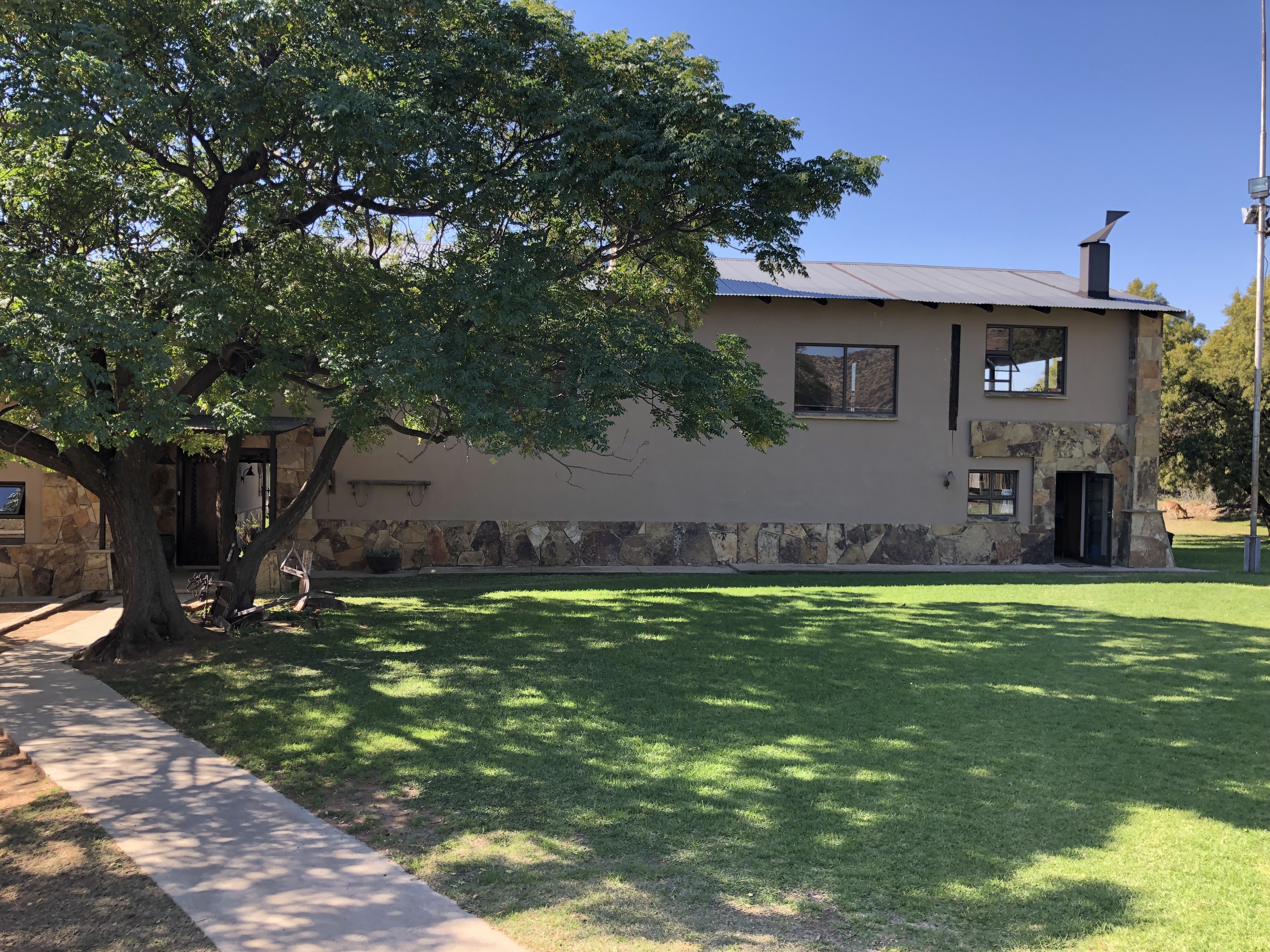 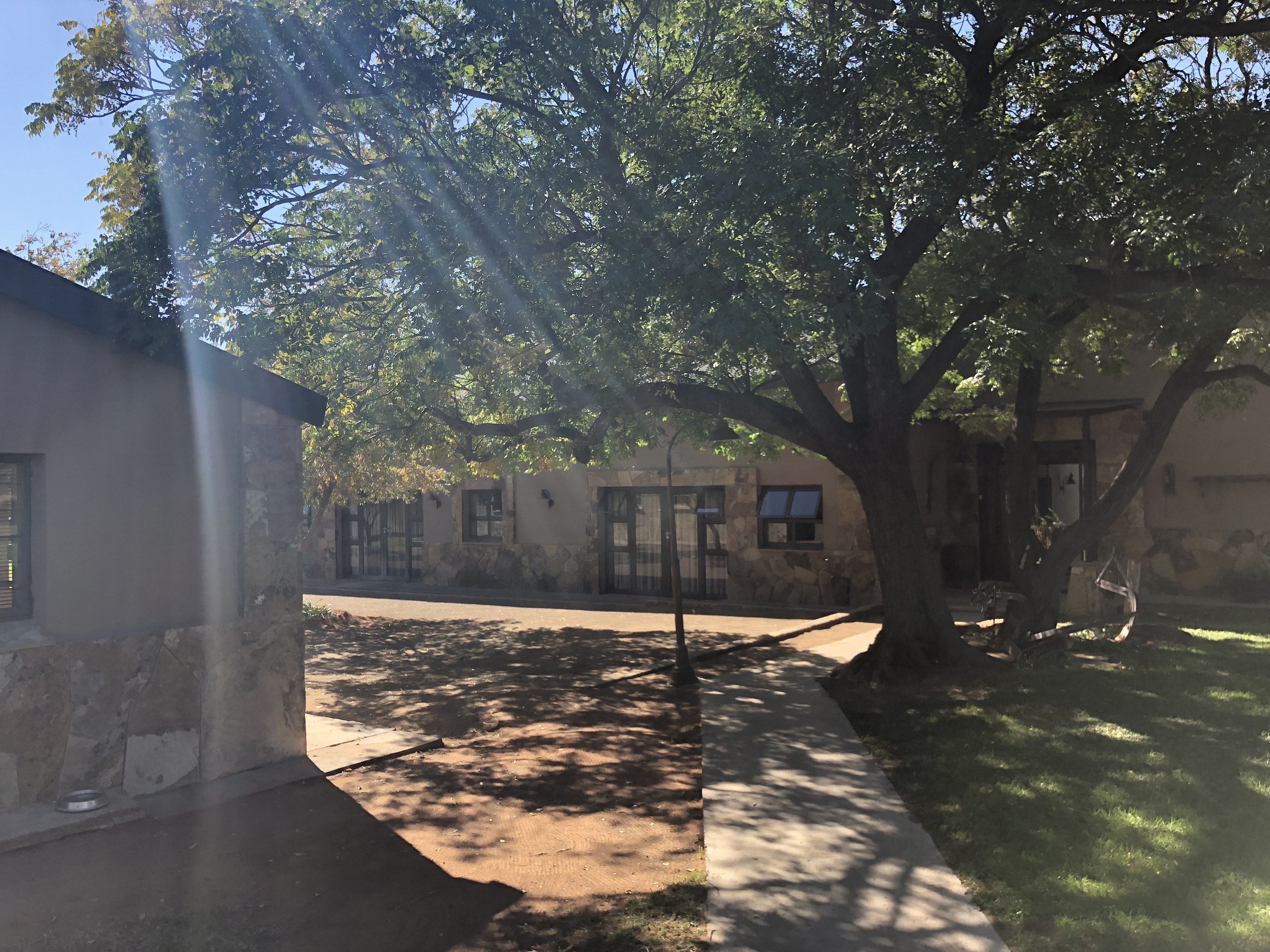 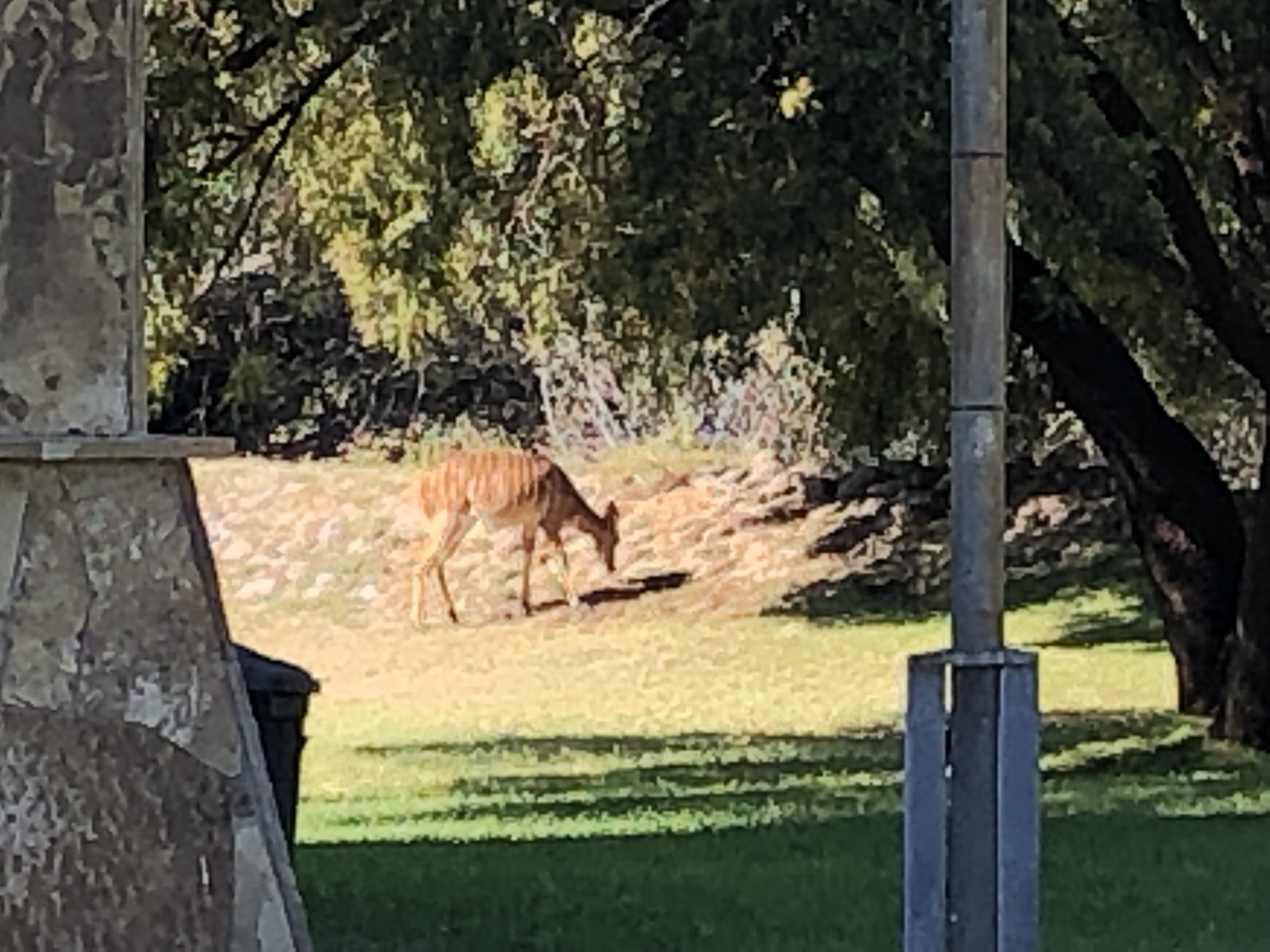 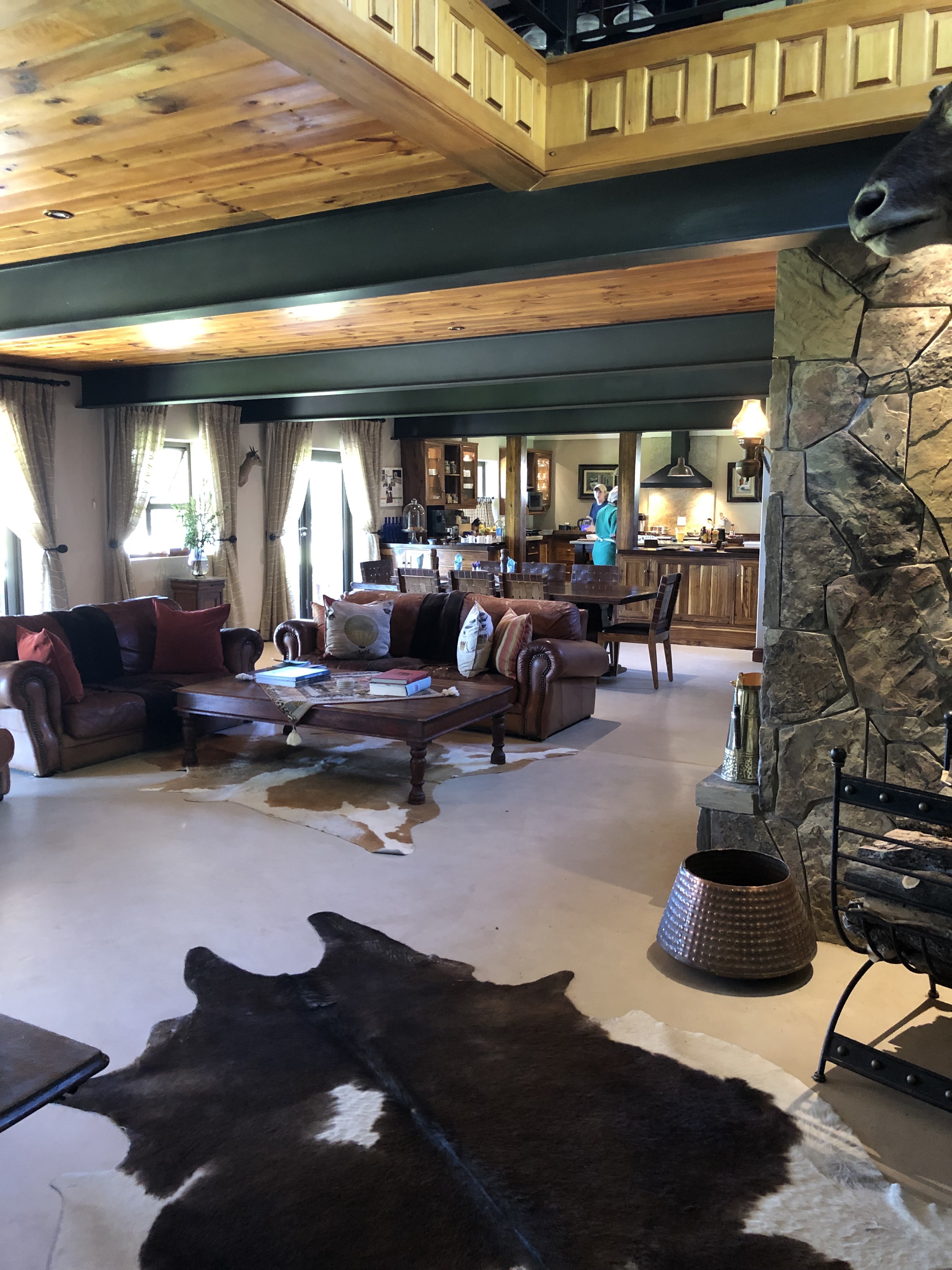 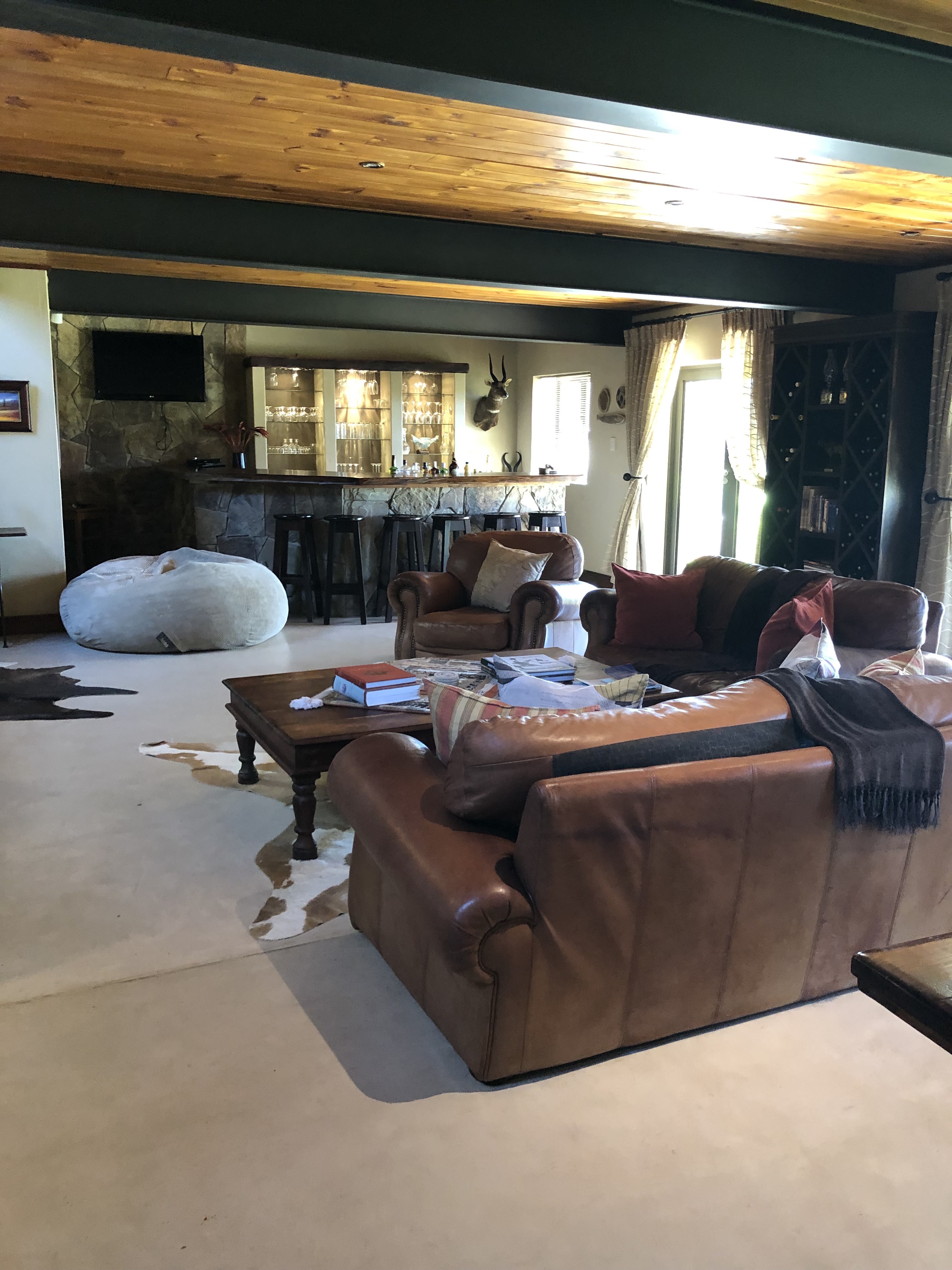 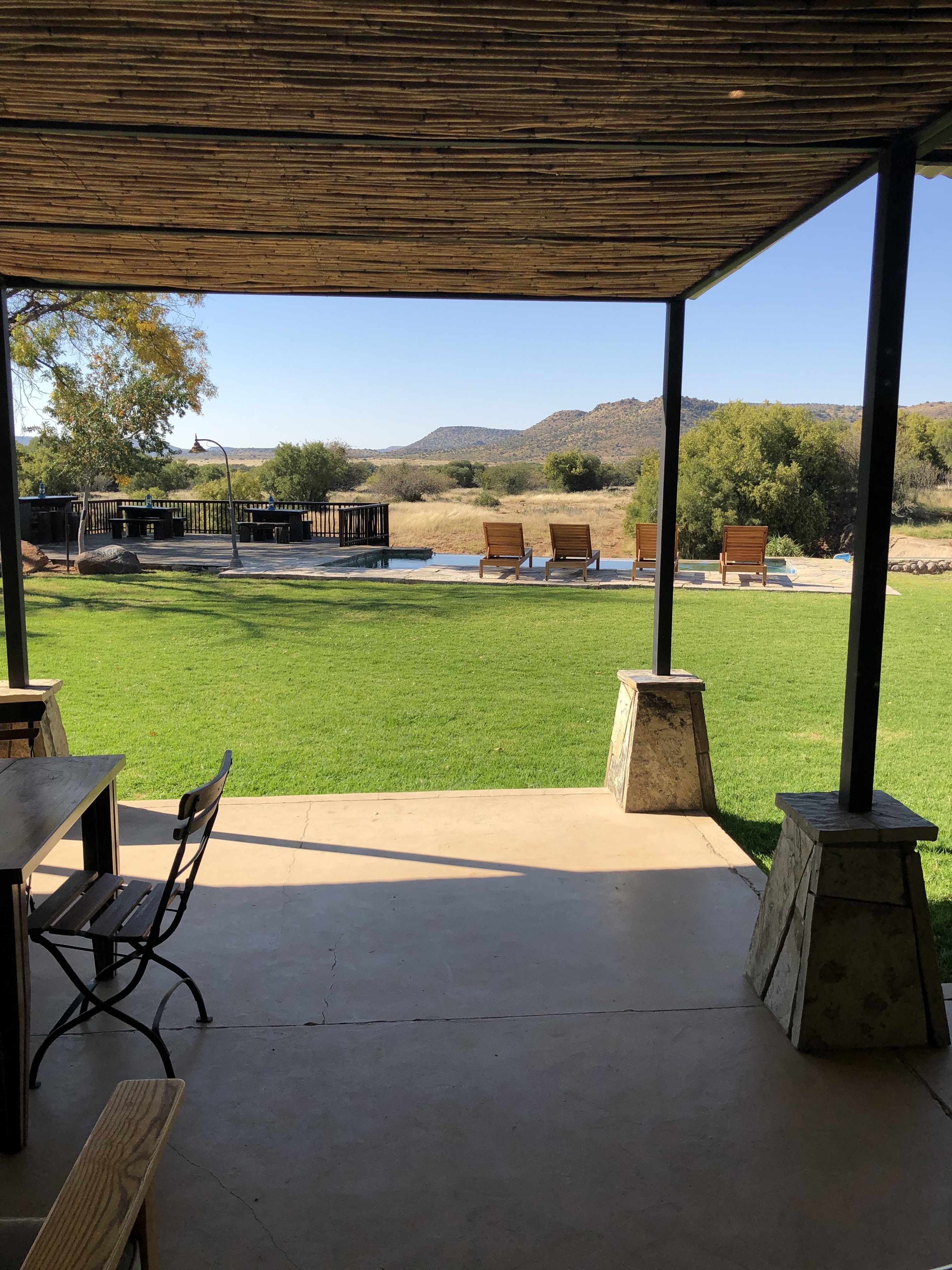 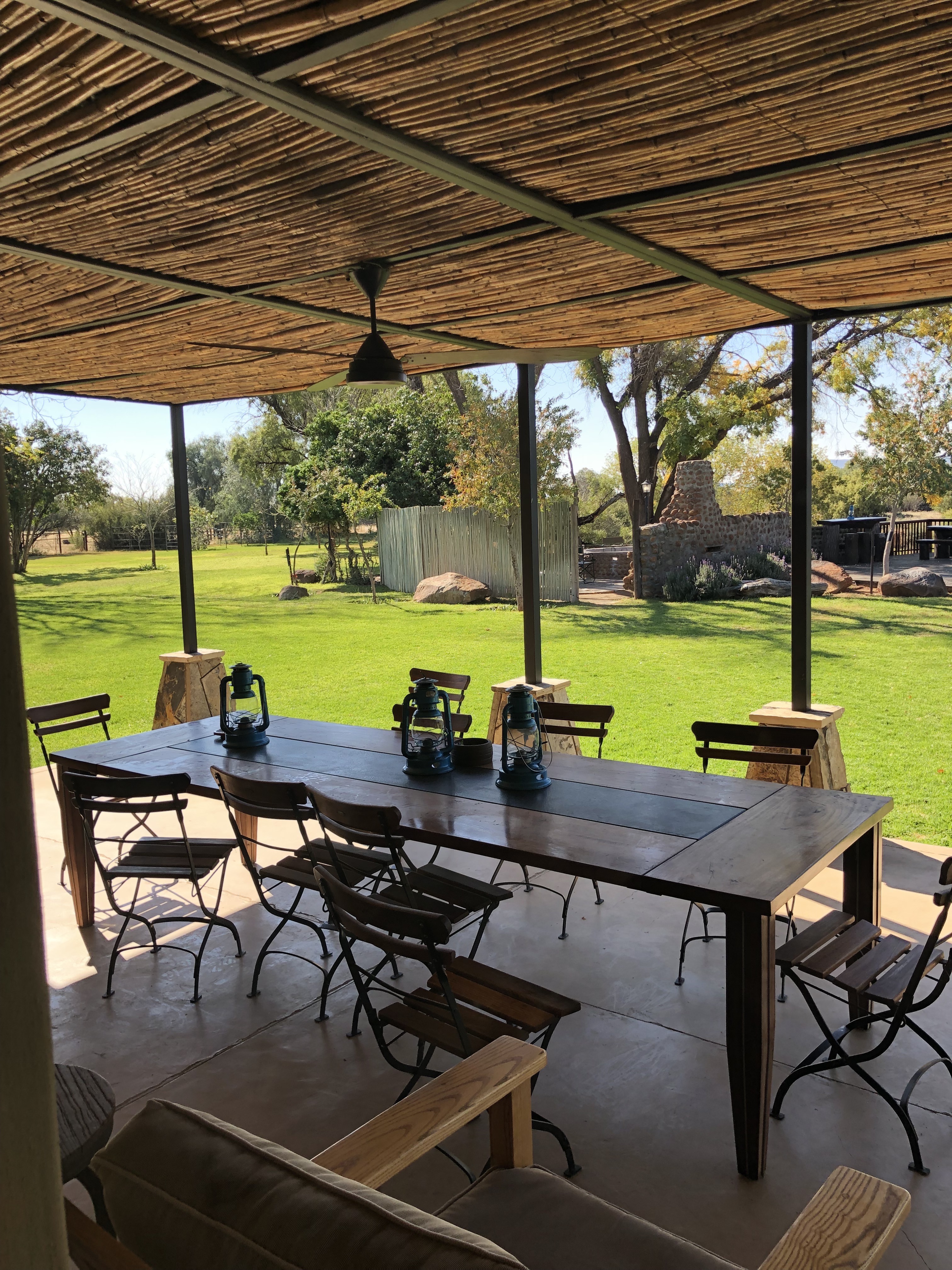 As mentioned above, I was along mostly for the ride……….mostly. I came with only the expectation to hunt something that was exceptional and possibly fill in a few missing animals.

One animal that has always been a dream species for me is sable. I have in the past seen sable in other locations of RSA and quite frankly was not impressed. The animals were clearly from a game farm where they had been habituated far too much to humans with what seemed like virtually no fear of man. As such I was not inclined to hunt for sable in RSA.

Sandy Mount is different. While I know that at least part of the herd there was established from raised animals, that was from some time ago. The sable there are part of a breeding herd. They do not stand around watching you as you drive or walk by. This was evident on the first day and my interest in hunting one there rose.

So we started looking for sable. The first bull we found that Jacques thought was a shooter did not work out. At first glance of a human off a truck, he took off on a dead run and put a km or two of distance in short order. And this included crossing two deep and steep water drainages where approach by a hunter without being detected pretty much impossible. It seemed to me that bull knew exactly where he wanted and needed to go to avoid us.

We looked at many other bulls after this first until a call came in from the resident manager of the animals that he had spotted a nice bull. He waited in the area where the bull was until we got there. This was a challenge as he was on the opposite side of the property and it was late in the day. But we got there and Jacques was definitely for taking this bull. The bull was on a hillside, not too high of a hill, but towards the top. We used cover and made our way along the bottom of the hill to close the distance. Unfortunately the bull crested over the top of the hill and I thought the game was over.

But Jacques doesn’t give up and we made our way to the top of the hill slowly. Jacques spotted the bull who had a friend with him going off the side of the hill at the other side. We made our way over to that point with the light fading fast. As the two bulls went behind a big bush I got setup on the sticks. The bull we wanted came out first at 100 yards. I got him in the scope, but wanted to pick up the zoom with the light going away. I did this quickly and got the cross hairs on the middle of the shoulder with the bull perfectly broadside. I let loose the 250gr North Fork from my .375 with that wonderful impact sound.

The bullet hit as expected in the middle of the shoulder and came to rest under the skin of the offside shoulder also in the middle. I’m sure the path took both lungs and likely the top of the heart.

At the shot the bull broke into a run, but even in the fading light I could tell it was labored. He made a couple of turns and then we could hear him crash about 100 yards further from where the shot was taken within just a few seconds. I was left shaking, this was a dream for many years and now I had my sable. 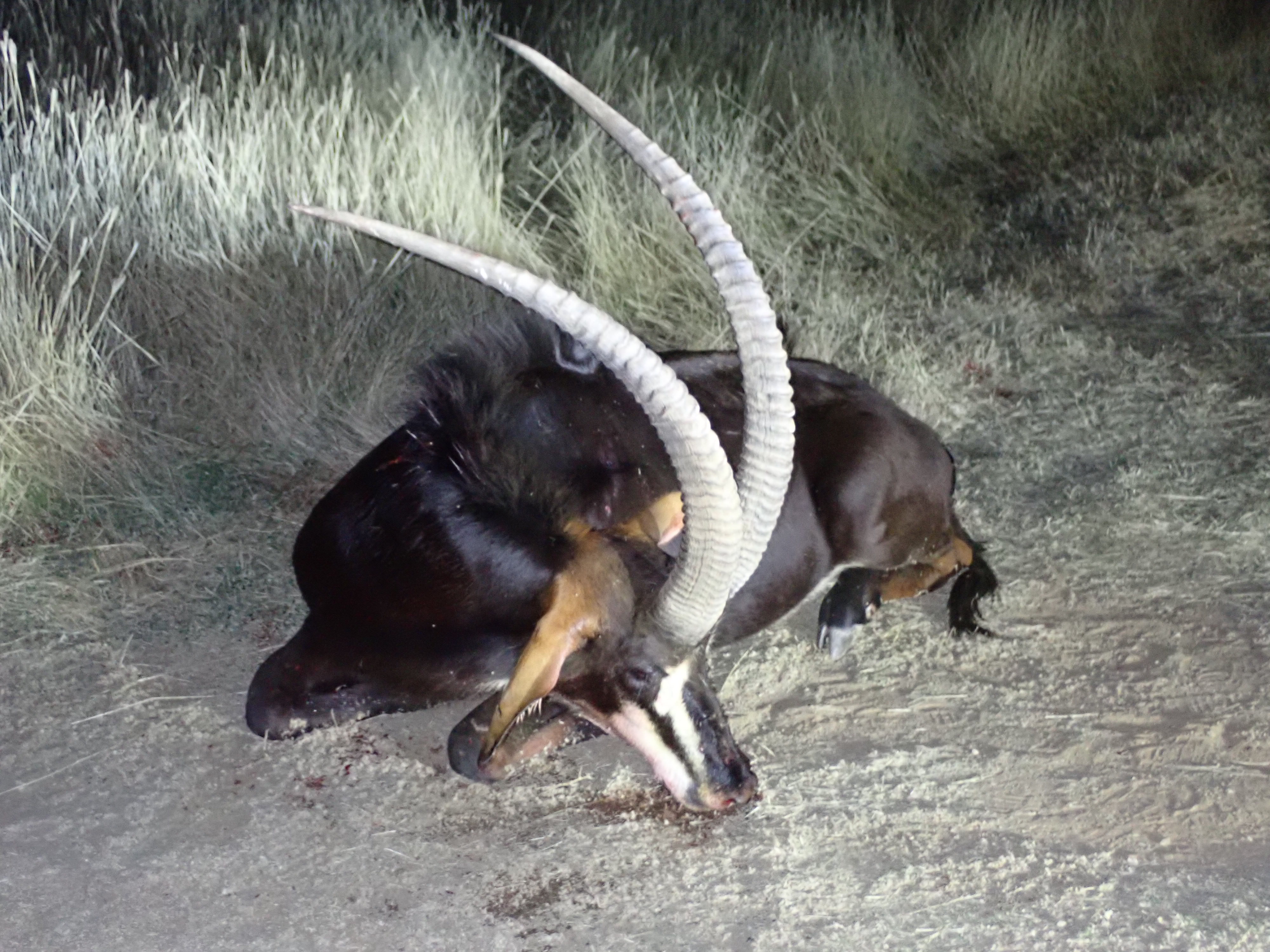 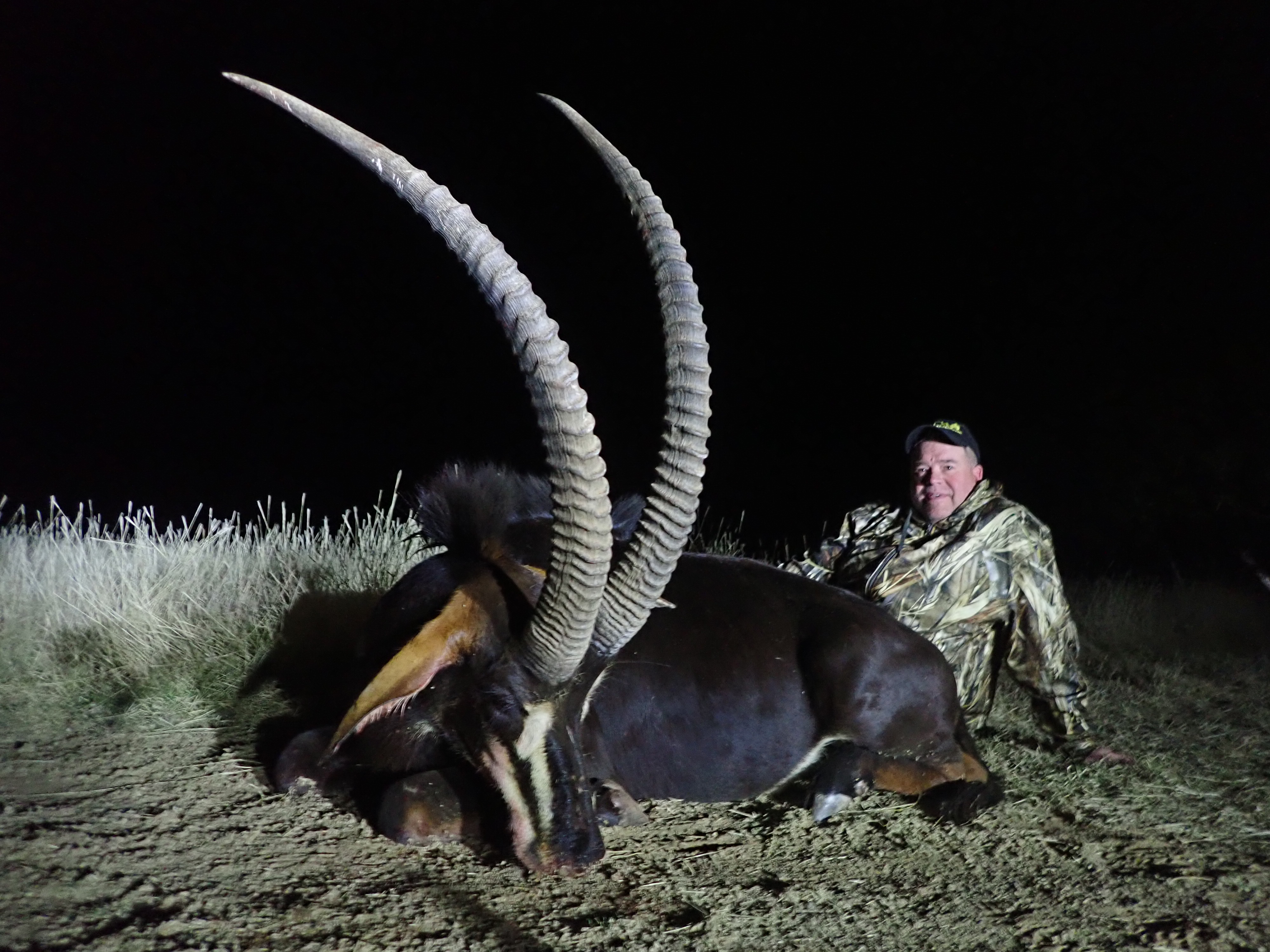 This would be the only animal I would take at Sandy Mount. Kevin took quite a few more, but I’ll let you read his report for those.

Dandy Sable! Glad you were able to hold off all these years and hunt one the way you really wanted.
Captain of the Luddite Society
https://www.africahunting.com/threads/zimbabwe-hunting-the-bvc-in-zimbabwe-for-buffalo-john-sharp-safaris-exceeding-expectations.53046/

Would love to see a picture of the other half of the trophy...the expanded North Fork!
Captain of the Luddite Society
https://www.africahunting.com/threads/zimbabwe-hunting-the-bvc-in-zimbabwe-for-buffalo-john-sharp-safaris-exceeding-expectations.53046/

I was fortunate enough to get daily updates as this hunt happened but still can't wait for the full report!
HUNTERS make importation bans work!

That is one fine sable! The pictures of the countryside are awesome!
Africa on my mind.

Great bull Phil!
"Montana seems to be what a small boy would think Texas is like from hearing Texans" John Steinbeck

Beauty of a bull you have.
Excellent report so far.
Keep us posted on the rest of your hunt...
“They that can give up essential liberty to obtain a little temporary safety deserve neither liberty nor safety.” Benjamin Franklin 1759

Very nice bull Sable! Congrats on getting him. Nice to see a RSA property where they are not habituated to people.... Interested in the rest of your hunt.
Bruce

Keep it coming!
Congrats on getting your Sable.

Handsome Sable! Some of that landscape looks similar to some parts of Arizona. Even if the Flora and fauna are different.

A nice sable and beautiful landscape.

Very nice sable!
Keep writing! Do tell about what is is like to watch a new hunter. What was different about your friend’s first hunt than your first hunt?

Come along with the rest good Sir !

The Free State is an interesting area to hunt, as you said, it is not all flat, I had the opportunity to hunt in a farm which is a valley surrounded by hills, just beautiful, and it gives the animals easy opportunity to escape and hide from hunters. Took me the whole day to shoot a Common Reedbuck.

Awesome sable Phil, congratulations
"There is nothing so good for the inside of a man as the outside of a horse."- Winston Churchill

Great report and your attitude towards sable resonates with me, finding a properly established herd to hunt. JKO Safaris is sounding good!
You must log in or register to reply here.

CAMEROON: Cameroon Hunt With JKO HUNTING SAFARIS (Or) At Least It Has Air Conditioning...
2 3