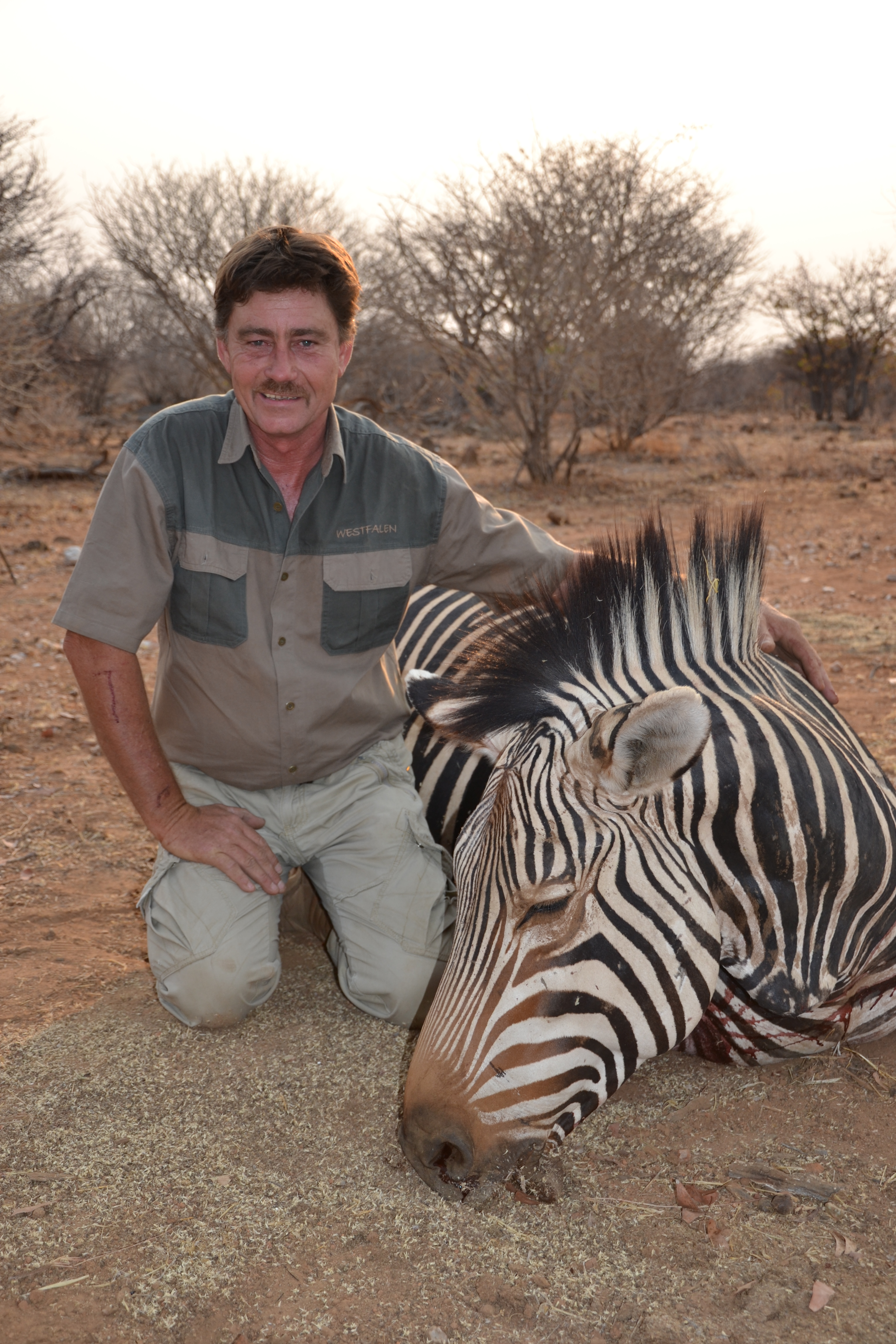 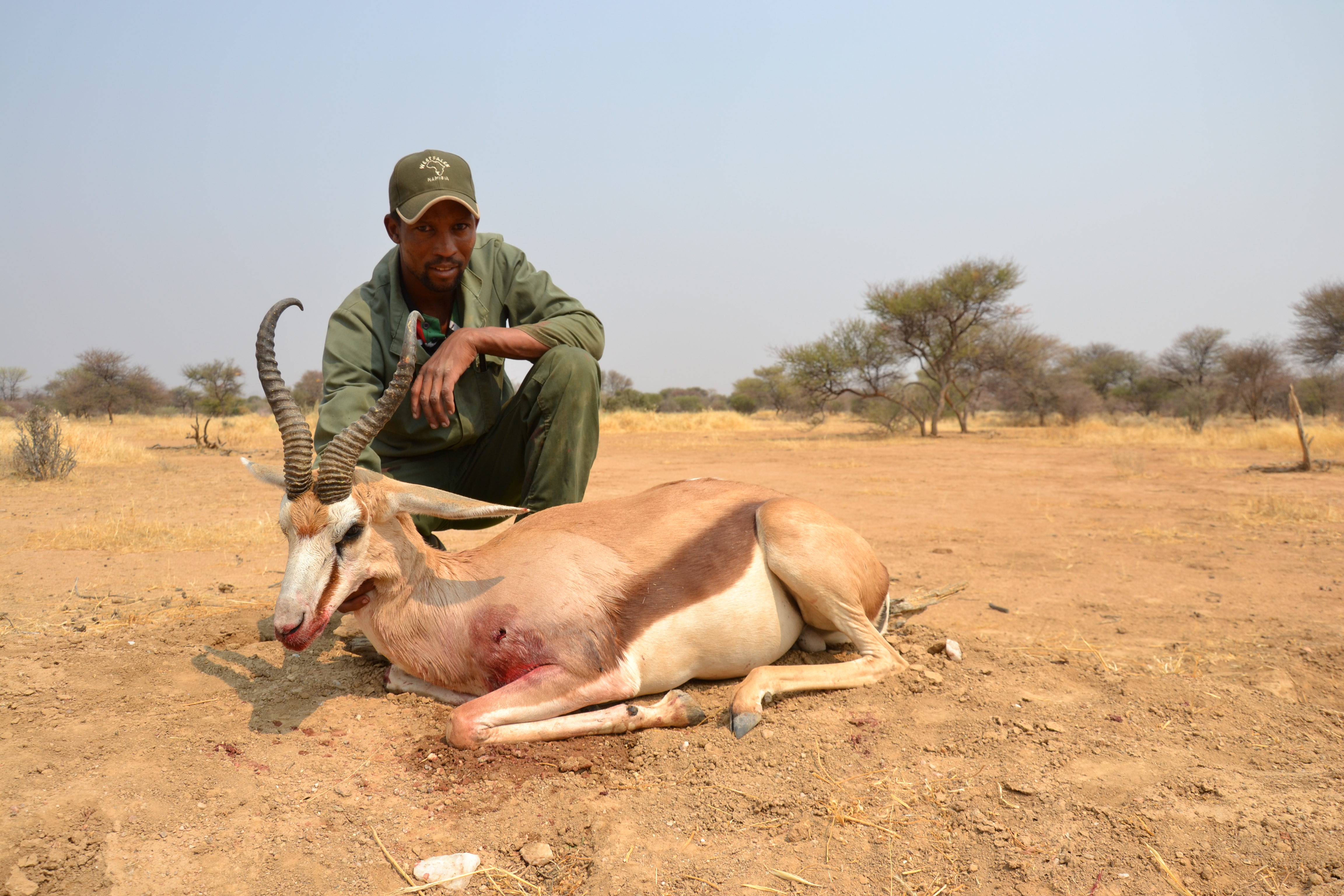 Westfalen Hunting Safaris Hunt Report/Review
My first safari occurred in Namibia August 2014 and was more than I could have hoped for. As a long time guide in Canada and has a boy growing up, I dreamed not only of adventures close at hand, but also to find hunting in all parts of the world that I could explore. No other place held a stronger pull then Africa, and Namibia turned out to be the logical choice for my first safari.

I had a few personal requirements though. I wanted to hunt on my feet. While I don’t judge others hunting methods as long as they are ethical, humane and fare chase, I wanted to have dirty shoes, tired, legs and scratched arms at the end of each day. I also wanted to have close shots. I have made long shots before, but I wanted my shots to be within 100 yards. I again have no problem with other hunters shooting further as long as they can do so with the required skill, but I enjoy my hunts more if the animals are close. Finally, I wanted to hunt kudu, springbok, oryx, zebra and steenbok. So, after talking to my friend, former boss and booking agent, he said “well, the hunt you are looking for is in Namibia with Westfalen Safaris”, which is owned and operated by John and Juliana van der Westhuizen. “John likes to walk and track” my agent said so the deposit was sent, and not too long after I was on a plane bound south of the equator.

So, this is the boiled down version of my week of plains game hunting at Westfalen. We first ran from a herd of desert elephants that we spooked while stalking Mountain Zebra. The next day I shot a nice zebra stallion followed by a wonderful old oryx bull. A day or so passed looking for the kudu but we finely found a nice 50 inch bull which we were able to stalk to within 40 yards of. That same morning, as the kudu was being skinned, I took a springbok ram. The after that we had three days of relaxing around camp, checking leopard baits for incoming clients and generally enjoying the warm glow of the Namibian bush country. And while we passed up several nice steenbok while stalking other animals, once we focused on them, they seem to disappear. Which is fine- I’ll have something to come back for.

For those interested in inches. The kudu bull measured 50 one side and 51.5 inches on the other. The oryx was 38 inches with 8 ½ inch bases, and the springbok was 15 and 15 ¾ inches. The Zebra stallion, well, he was just simply magnificent.

The accommodations were great, and the hunt was a great mixture of relaxation and exciting hunting. The land is beautiful and the owner and PH John Westhuizen was more than accommodating when I wanted to stop and look at strange millipedes and tracks while we were on the spoor of serious game. The food was world class and the staff excellent. Many of the lodges here at home in Canada could learn a thing or two about how to run a hunting lodge from Westfalen.

So in the end, what kind of hunter would this safari experince be well suited to. If you like to walk and track instead of driving around the bush all day, then this place is a good option. If you are looking for a good place to hunt oryx, mountain zebra, damara dik-dik, giraffe, and springbok, it's worth looking at Westfalen. Now while I did well and found a good Kudu on my hunt, the kudu population in that area has taken a hit from a rabies outbreak and depressed by about 40-50%. With hard hunting, you have a good chance at getting a good bull, but the “gray ghost” is never guaranteed. Of course there are also the steenbok, red hartebeest and warthog and other great trophies available at Westfalen.

The operation is small, servicing, if my memory serves me correctly, four hunters or two couples at any one time. I was traveling on my own and had the run of the place, which was quite a luxury for a working class guy. Most important for a Canadian on holiday, the local beer was good and always cold.

What I would do differently if I return to hunt the elusive steenbok. First, I would practice my shooting a bit differently. I practiced off shooting sticks for months before I left on my adventure but would, next time, practice shooting after I was slightly out of breath by possibility taking a sprint or doing some push-up’s before I needed to take a shot. When hunting there I found that shots often come quickly, un-expectantly and after a quick or longer stalk. Being used to shooting slightly out of breath and quickly would have been useful.
I’d also wear pants that were a bit tighter around the lower legs so I could navigate the thorns that seem to be on every single tree or bush in Namibia.

I would also plan on staying a bit longer next time (I had seven full hunting days) and go to EtoshaNational Park for a tour and maybe see more elephants, rhinos, and other animals. It would be a good break from the hunting and it’s not too far from Westfalen’s hunting operations. I would also try to get a fishing trip in along the skeleton coast. The shore casting for sharks and other gamefish looks like a great time.

My only real complaint was that as a wing shooter, I was always distracted by the apparent quail and grouse like birds that were everywhere. Westfalen dosent offer upland bird shooting but a day hunting birds with a shotgun would have been great and man, the birds looked like they would be tasty hot off the mopane grill for dinner!

Some of the things I did do rights was get into reasonable shape before showing up, not over packing, and taking good comfortable hunting boots- I ended up wearing a pair of Clarks Chukka boots most of the week and with a good pair of Smart wool shocks made for joggers. My feet were more than happy the whole hunt. I’ll also bring a tube of Vaseline again. The dust in Namibia is fine and gets everywhere. I had problems with it irritating my eyes and nose the first day I was there. I found that a bit of Vaseline around my nostrils would help keep the dust out of my nose and made me more comfortable. Sunglasses helped protect my eyes and after about three days I seemed to adapt to the dust but still, the Vaseline helped a lot those first few hunting days. Light shooting gloves were handy to turn thorns and help griping my rifle when it was hot and my hands got sweaty.

So, if you are into having your boots on the ground and hunt free ranging plains game- especially oryx and zebra, Westfalen should be on your short list. My only regrets are that I didn’t have time to stay longer and I passed up some nice steenbok while tracking zebra and kudu. Otherwise, it was the best money I’ve ever spent on a hunting trip.

Some excellent advice on suggestions for shooting practice.

Thanks for sharing your report..

yep you enjoyed the hunt .......
if I was looking into a hunt in Namibia , westfalen would ,be in the top three , with out a doubt
thanks for sharing your memories with us all
and welcome to AH
THE HUNTER; The person that pays over 90% of the cost for the presavation and maintance of wildlife and gets zero credit for it ................

Glad you had a great time.

Thanks for sharing the report.
And here I am, returning to Africa of many faces;.... the sloe-eyed temptress with flowers in her hair who stole my youth and my heart, and left me an old man with a kaleidoscope of conflicting memories of many dashed hopes and some fulfilled dreams. E. Echols

You took some awesome trophies, would love to see pictures!
Bowhunter addict

dmyers said:
I practiced off shooting sticks for months before I left on my adventure but would, next time, practice shooting after I was slightly out of breath by possibility taking a sprint or doing some push-up’s before I needed to take a shot.
Click to expand...

And the advice you give is spot on. I actually did this and it makes a heck of a difference. Speed is to me much more important than extreme accuracy. You've got to be quick on those sticks and in less than perfect conditions.
HUNTERS make importation bans work!

Great hunting report, that you nice springbok there!

Congratulations. And, thanks for the report and lessons - good ones for all of us.

Thank you for sharing Drew - you are right, we never mix hunting groups. Trust that the memories will last a lifetime!

I have not hunted with John but did have a couple of emails with him about a hunt. For the critters I was talking about he said he didn't think he would be the best option. I can only say that I really appreciate his honesty in telling me the truth instead of trying to convince me otherwise to get me booked. Cant ask for more than that! I can just on that, recommend him to others.

Congrats
Tommorow is promised to no one. Go live your dreams.

Congrats! That Mountain Zebra and Springbok are the most! No Doubt you had a great time. Thanks for sharing.
Enjoy Life Now! It has an Expiration Date.

Congrats for a great experience, and thanks for sharing !
You must log in or register to reply here.

Our conversation record is lost on my end. I'm not sure what happened.
You sent a message last Thursday that you had received my payment for the Ruger 9.3x62.
Can you give me an update about shipping please.