This thread is to be read along with Jfet "Kowas Writing Curriclum.."

Having finally settled in to new apartment and work, I find that my mind is constantly being drawn back to the wild plains, blazing sunrises, and primal beauty that is Africa. Since some techies at work have decided to lose my paperwork, I find I have ample free time to jot down my accounts of Team Fet’s venture into the Dark Continent.


Having spent the morning sighting in our rifles and assuring our PHs that we could at least scare the broadsides of barns off the sticks, we piled into the back of the trucks for a brief game drive to scout and familiarize ourselves with Kowas. I was constantly amazed by the sheer variety of animals that Namibia produces. Used to seeing nothing more exciting than groups of white-tailed deer in West Texas (plus the occasional turkey, coyote, and pig), viewing groups of zebra, blue and black wildebeest, hartebeest, ghostly oryx, and energetic springbok was immensely exciting! And, because it can only happen in Africa, the rustle approaching from the acacia trees, so very like their Texas Mesquite cousins, was made not from a curious white-tail doe, but an equally curious juvenile giraffe and his mother, necks outstretched above the tree tops. Witnessing sights such as these only fueled my excitement as I would soon match wits with these magnificent beasts.

After lunch (which at Kowas means a full three courses including Kudu meatballs, fresh baked bread, soup, gravy, more bread, and the ever present “may I get you something to drink”, the Strauss family are exceptional hosts) Ty and I paired off with our PH Claude Thornburn to chase after a blue wildebeest for me and a red hartebeest for Ty. Being the nice older brother (questionable description if you ask the younger) I allowed Ty to hunt for his hartebeest first. Once again mounting the truck, we set off for our first hunt.

Those who have hunted the grasslands of Namibia before can join me in admiration of the skill of PHs and trackers. Claude and Michaels, the driver, immediately began to see signs and animals with the unaided eye long before we could with our binoculars. It was a pleasure to see true craftsmen at work, boosting my confidence that we would find animals. Taking them however, depended on our ability to put bullets downrange. We dismounted for our first walk and stalk, attempting to mimic Claude’s silent movement through the bush. The pasture that we were in was fairly open, grass covering the ground not filled by rocks and acacia trees. We moved parallel to the road, constantly straining our senses to find our quarry. After an hour, we had spotted nothing and returned to the truck.

Riding a half mile to the west, we once more left Michaels at the truck and set off. Fifteen to twenty minutes pasted when Claude froze and signaled for us to do the same. In the distance grazed a small herd of hartebeest. Even though I was not the shooter, my adrenaline surged! I was certain that my heart could be heard by the hartebeest over 600 yards away! We slunk stealthily from tree to bush, bush to clump of grass, praying the wind would stop shifting and that a lone black wildebeest sentinel would not detect us. Drawing behind an acacia tree, Claude mimed to me to stay put as he and Ty moved closer. I crouched down, balancing my rifle between my knees and waited. Each minute dragged into an eternity as I silently fought swarming hordes of flies, waiting for the sound of hooves or gunfire. The crunching of boots is what met me, followed by Ty and Claude.

(Claude shaking head) “Damn springbok was hiding in the bush. He run off and take everything with him.”

Ty shrugs his shoulders and we move on.

Moving another 200 yards, Claude once more called a halt, raising his worn, but reliable binoculars. (These binoculars bare the marks to the leopard that took a liking to the taste of Claude a few years back. You can see the teeth marks that were meant for Claude’s neck, but that is a story for later.) Claude urgently motioned to me to come up, excitement poured off of him.

True adrenaline hit me, my breath coming in short gasps as I fought to control my excitement. I followed my PH in a low crouch, legs burning after several dozen yards. We eased behind a large bush and I received my first view of the horned prey. A group of four blue wildebeest stood 100 yards from us. The first two were in the open while the last was partially concealed by a large tree. The third, naturally being our target, was completely hidden to me behind a line of medium brush. When asked if I could see it, I asked if wildebeest were supposed to look green and leafy. We crept to the right, judging every footfall and once more offering any price for the wind to stay in our favor. 20 yards closer I could finally see my target. By see I mean a small black patch between branches, amazing how such large animals blend in! Claude set up the sticks for me and I placed my rifle, looking through the scope. The wildebeest stepped forward into a large gap between the branches and I could make out the thick neck and dark stripes along the shoulder. The only problem was a young sapling directly in my line of sight, half way to the target. The only way I could take a shot was to shoot between the branches of the sapling, then through the branches of the second tree!!

I felt a whispered “can you take him?” and feeling that I could, answered with a trigger pull. BOOM! Reload! I stayed in battery as I cycled another round into the chamber. I heard a sharp “he’s down” from Claude as I attempted to remember how to breathe. The picture process that followed was very interesting. Any animal that we would typically take on our ranch will be photographed, yet it will typically be on the ground covered in blood caked dust. African trophies are presented in a more appealing way, cleaned diligently, rolled into a kneeling position, and faced toward the camera. Claude, honoring the Jager-styled tradition, presented me with a small twig smeared crimson from the animal. Pictures were then taken, wildebeest loaded (with effort!), and we focused upon finding the hartebeest.


By 5:00 pm the sun began casting long tendrils of shadow as it lowered behind the eastern hills. Our search had moved us to the edge of a wooded strip, ending the open plain that we had spent the day on. A quick tap on the roof of the truck pulled my attention from my trophy and binoculars flew to our eyes. Five hartebeest stood still amongst the trees, staring but not seeing us due to the orange glare that masked us. Silently we offloaded, Ty behind Claude with his rifle while I brought up the rear. Using the tree line to cover our approach, we moved ever closer to the area we had seen the prey. At 200 yards, Claude again motioned for me to hid behind a bush as he moved ty into position. Once more I waited, amusing myself by watching a line of ants stoically march by. The light continued to fade, then BOOM!

BOOM,BOOM,BOOM! I jumped up as Ty called to me, “I need more bullets!” I had wisely brought two extra rounds, but they were sitting in my vest in the truck. Claude shouted for me to watch the downed hartebeest, tugging his radio from his belt to call for the truck as he and ty ran towards the road. The wounded animal had been struck high in the shoulder and was struggling to stand, crushing the tall grass around him. As I heard ty reloading some yards behind me, it suddenly heaved onto its legs.

Being good at following orders, I dived down as Ty let off another round. (For everyone’s info, he DID NOT shoot over me, merely to the side about 30 yards. I was still down range though, and knowing it makes a better story, like to leave that out unless asked). The hartebeest stumbled along its terminal steps, then droped underneath the boughs of an acacia tree.

Handshakes and pictures followed, then we squeezed the hartebeest into the bed of a very full truck. Arriving back to camp, we were greeted by the joyous bounding of Buckees, the Jack Russell. He came to thank us for the kills, which any African hunter knows, were definitely his. Thirty minutes later, Mom and Dad returned with Mom’s massive Burchel’s zebra. It was a fantastic way to finish the first day, and we celebrated long into the evening, watching the sparks of the fire float up into the velvet sky of Africa 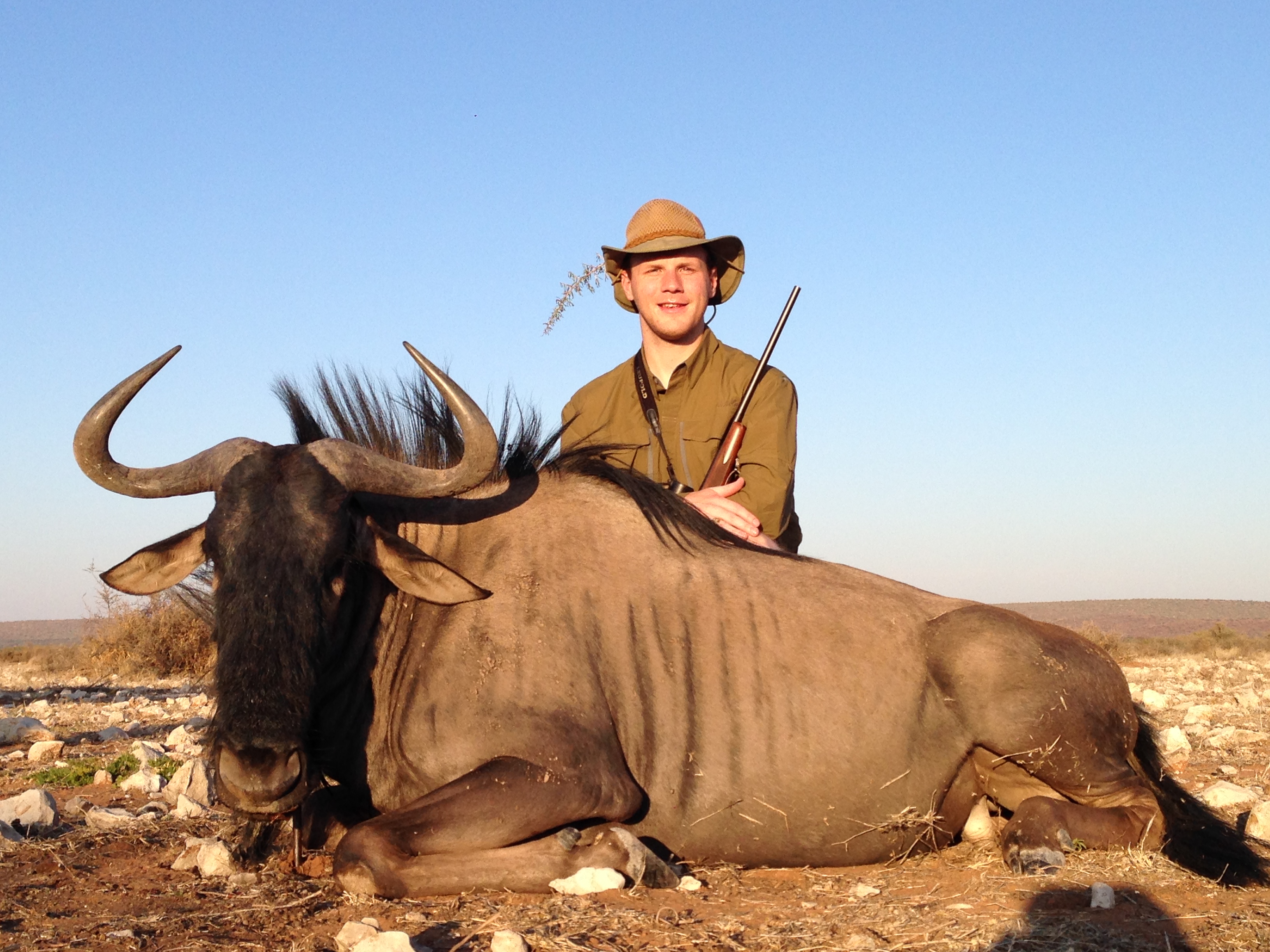 Pictures of wildebeest and hartebeest 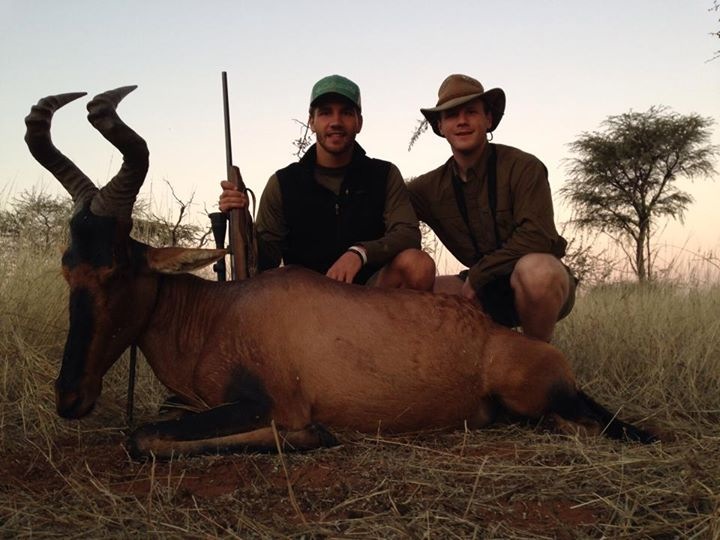