As I have alluded to in previous threads, I purchased a Winchester M70 (Pre-64) barreled action in 270 WCF (Win) with the express purpose of having it re-barreled and stocked in caliber 9.3x62 (Mauser). According to the factory records, it was made around 1947, and featured the transitional style safety, and the curved tang. Not a "pre-war", but being without the original stock anyway, it has very little, if any collectors value. Having said that, I got a good deal on it, and I have always wanted a "Pre-64" Win M70, and I thought what the heck.

I have few rifles by Wayne, and I feel that his craftsmanship is superb for the money paid by the buyer. So I contacted him, and we set out to build a rifle in this vintage, workhorse of a caliber.

The rifle itself features the original action, that was stripped down to all its bare components for cleaning by myself and re-assembled. I installed a Timney aftermarket trigger (made for the Pre-64) rifles, and set the pull weight to around 2.5 lbs. Wayne then took the rifle and completely reworked/trued the action. He then installed a Kreiger barrel cut and crowned to 24 inches. The bolt stop was removed, and replaced by a Wisner checkered bolt stop. The bolt body was jeweled. As the extractor was an aftermarket extractor, it wouldn't hold the Nitre bluing like I wanted, so we elected to go with a jeweled extractor instead. NECG rear and front sights were installed, along with a barrel band front swivel. The metal was finished in a matte, hot-blued finish. Finally the rifle was stocked in a AAA piece of English walnut with 24 lpi wrap-around checkering and Fleur-de-Lis accents. It was cut to my LOP, and finished with a red Pachmayr Decelerator recoil pad, and has a blued and inletted rear sling swivel. Overall, the rifle feels trim and svelte in my hands, and point well. Unloaded and un-scoped, it weighs in around 9 lbs. I plan to install an Leica ERi 2.5-10 x 42 scope with the 4a reticle in detachable Talley rings.

I received the rifle today, and needless to say, I am beyond thrilled with the way the rifle turned out. I plan to hand-load it with 286 grain Nosler Partitions for heavy plains game, leopard, etc. , and I am targeting a velocity of around 2400 fps. Anyway, I thought I would share the pictures as many on here (myself more than any) love to gawk at others rifles. My next rifle that I am going to have Mr. Jacobson build me is a 404 Jeffrey based on a CZ 550 Magnum action (AHR Dangerous Game). 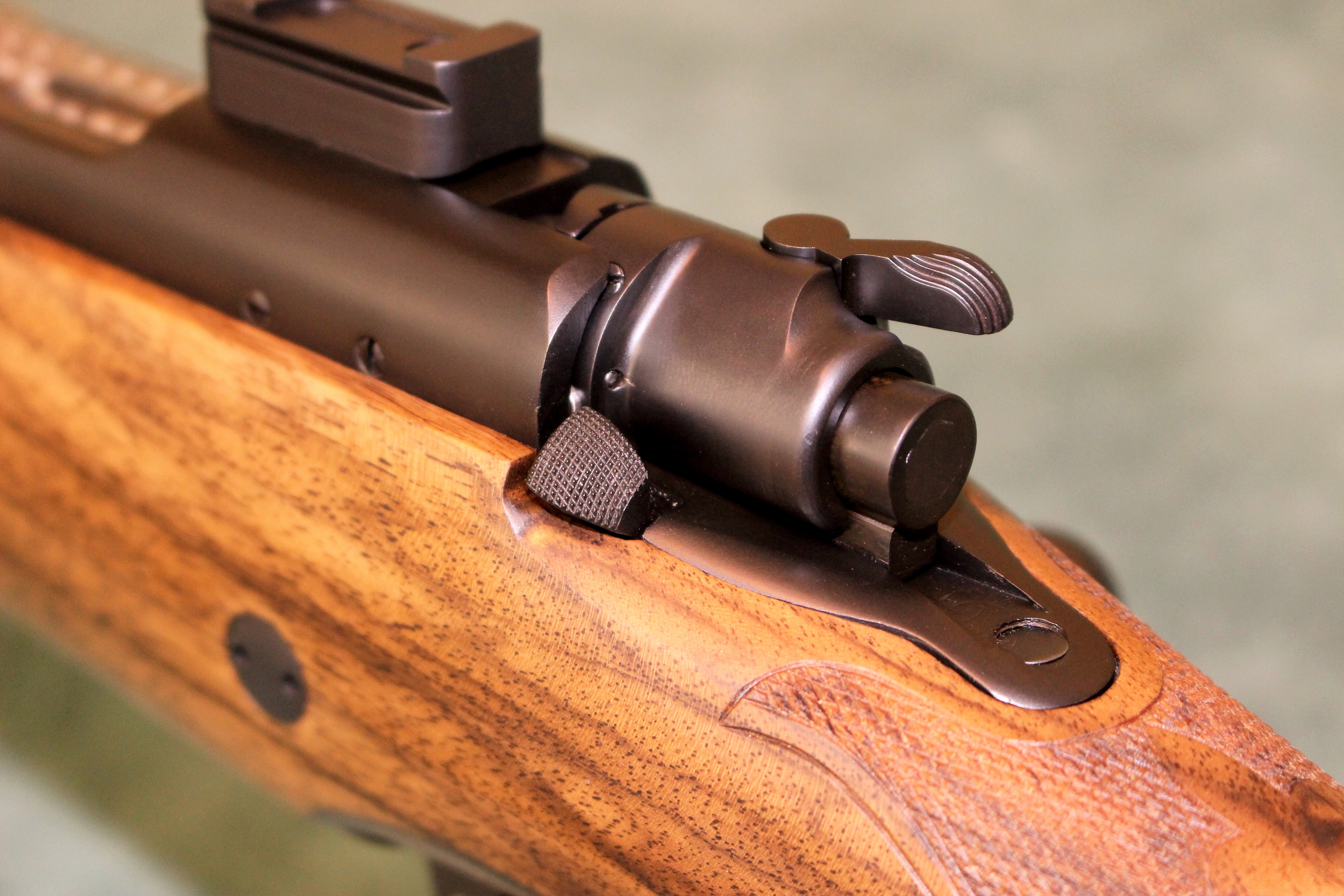 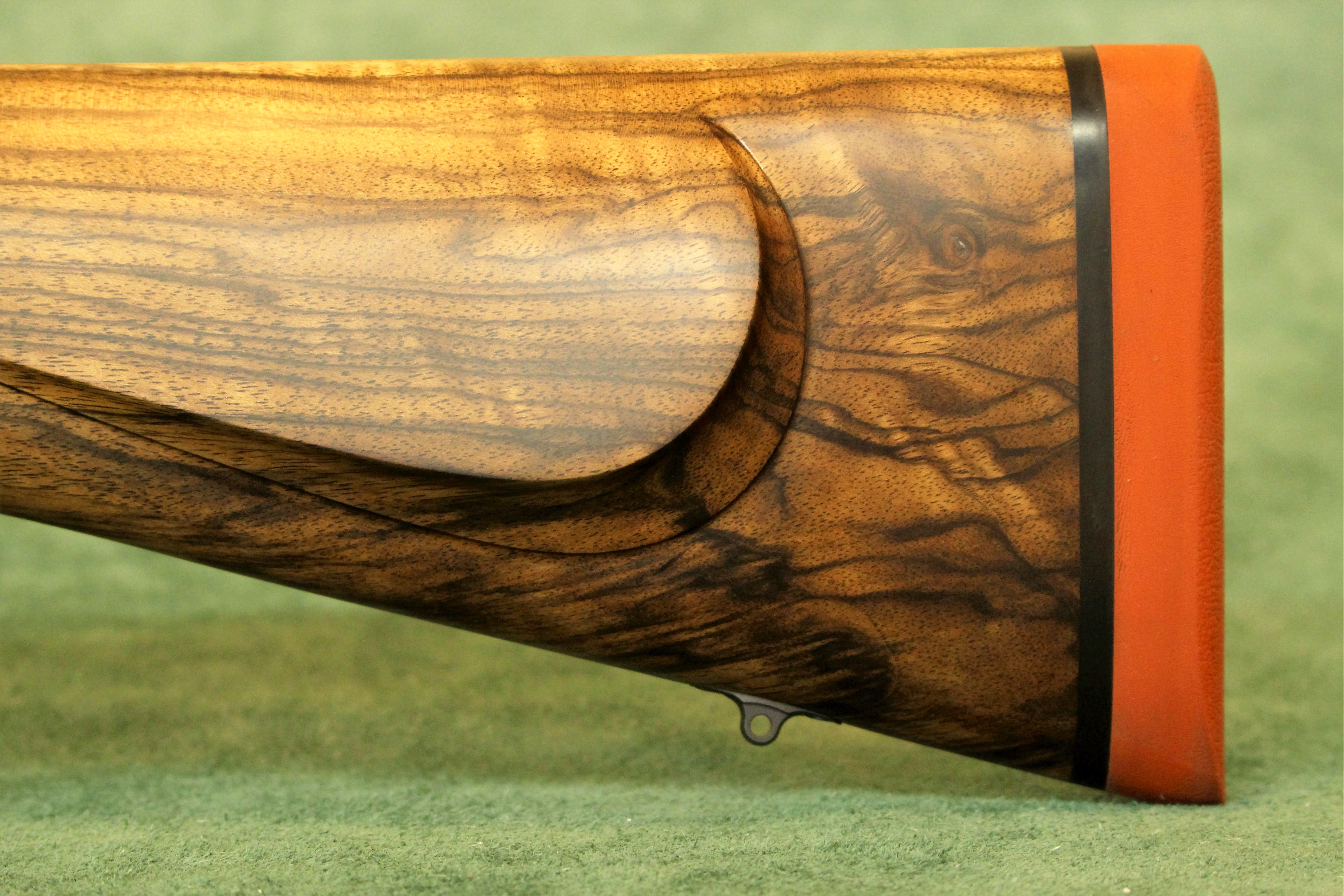 Last edited by a moderator: Sep 28, 2016
"I call it the law of the instrument, and it may be formulated as follows: Give a small boy a hammer, and he will find that everything he encounters needs pounding." - Abraham Kaplan, The Conduct of Inquiry: Methodology for Behavioral Science (1964)

WOW sandman. You got a beautiful rifle there. Anxious to hear if it shoots as good as it looks.
Clayton
There's just something about Walnut and Old Iron.

I like it. Interesting and useful combination of British dimensions and American detail work. Hope it shoots as well as it looks.
"We sleep soundly in our beds because rough men stand ready in the night to visit violence on those who would do us harm" American Novelist - W. Churchill

That is a beautiful stick sir! Congrats!

Geezy peezy that is pretty!

You got that exactly right Phil.

Magnificent, congrats
on the ocean or in the bush.

Beauty of a rifle! Had me going with the caliber in the title though.

I just caught the title.....that's gonna drive me crazy now. I'm not sure how to correct it. Oh well, that extra mm goes a long way…
"I call it the law of the instrument, and it may be formulated as follows: Give a small boy a hammer, and he will find that everything he encounters needs pounding." - Abraham Kaplan, The Conduct of Inquiry: Methodology for Behavioral Science (1964)

Beautiful rifle and a classic calibre, gets the job done without the "showing off" of the modern magnums.

looking forward to your 404J , the two rifles will make a great pair .
on the ocean or in the bush.

I agree with Bassasdaindia.
Witold

Wow! You did good! Don't know anything about the calibre though.

sierraone said:
Wow! You did good! Don't know anything about the calibre though.
Click to expand...