I just purchased a set of alaska arms quick detach scope rings and i think im going to put a Leupold vx-r 1.25-4x20 30mm "hog hunter" illuminated reticle to top it off. I like what i have read about the scope and i think it will fit my needs well now that the gun is up and running.

Sounds like you are going to be ready for the races so to speak!

Thanks! I think I will probably do some field testing with it in Pennsylvania's upcoming black bear season in late November. Granted it's no cape buffalo, but it'll be good for starters haha!

Voodooracer said:
I just purchased a set of alaska arms quick detach scope rings and i think im going to put a Leupold vx-r 1.25-4x20 30mm "hog hunter" illuminated reticle to top it off. I like what i have read about the scope and i think it will fit my needs well now that the gun is up and running.
Click to expand...

Sounds like you're up and running. By the way I have one the Leupolds you mentioned putting on your rifle. Been thinking about selling it for awhile now. Nothing wrong with it, just decided to go a different direction. Maybe 30-40 shots with it when I had it on my .416 Rigby.

Thanks, I'm hoping so! Ah darn, I just ordered one from my ffl dealer. I think it'll be a great scope, leupolds are tough and have a great warranty. i think the max 4x will be enough for the intended ranges i plan on shooting at with the 416.

Got the new 375 Ruger Guide gun home tonight and ran 3 rounds through it just to see how they feed. They fed just fine but got scratched and dented a little on the shoulder. The feed rails are pretty sharp, look like they need a little polishing and burrs gently taken off.

I also picked up the Predator in 6.5 Creedmoor that I ordered with it. That one feeds really nice, especially compared to the Model 16 Savage I have in Creedmoor. The push feed Savage kind of pops the cartridge loose from the magazine and then shoves it into the chamber over a pretty steep ramp. Sometime the cartridge seems to bounce around and we have had some minor jams. I did use it enough to become a huge fan of the caliber but decided I wanted to try a Ruger and the CRF. The 2 stage trigger that comes with the Predator model is "really" sweet. Can't wait to get these two new additions to the range for some live fire.

Between my son and I, there are a few of the 375 Rugers in the safes. Three of them are very early production, pre-barrel band sling attachment rifles. One is an African that feeds everything slick; whether operated fast, medium, or slow. Two are re-barreled stainless, pre-barrel band also, which feed very slick also.
Two are later production, barrel band type. These two took a lot of rounds cycled through prior to feeding properly. They suffered from popping rounds out, failure to pick up rounds, and severely scratching brass. It appeared as though the feed ramp edge was a major culprit, though the feed rails also appeared to be a lesser issue. LOTS of brass shavings would build up forward of the feed ramp. One of these smoothed out after, estimating, a few hundred cycles of ammo through it. The last one was closer to several hundred cyclings, I almost gave up on it. As mentioned some cases would be dented, severely scratched (much worse that yours), and brass shavings looked like a lathe had been turning brass. I was almost ready to throw in the towel on it, eventually though it smooth out and feeds fine with the DGS, DGX, and 270 gr TSX (which fed somewhat better in the beginning). Due to all this, I do have a couple of boxes of ammo, that I will not be re-using the brass.

The Guide gun is to me a really cool gun and I did not even seriously consider another gun in this case because it is for my wife and it fits her with no more modification than to remove the stock spacers and mount the scope as low as possible. I suppose I could have bought a Winchester or CZ and had it cut down or had a custom gun made for her. But the price of the Guide gun cannot be beat and she likes it and that is what counts!

I also really like the 375 Ruger cartridge, other than it is hard to find. In spite of the action biting the casings, it feeds really well both fast and slow.. at least the first few unfired.

However, I pulled out my Winchester 375 H & H to compare side by side and there is no comparison in smoothness of the action. Gotta love that Winchester silky smooth feel. The bolt lever is also easier to get hold of and clear the scope. So the Winchester gets my vote for those traits and the classic look.

The Guide gun is new and thoughtful and looks to be very durable... Just wish they spent a few minutes having a craftsman clean up the milling a bit. To me it would be worth a few extra dollars to have the refinements.

Anybody know a good gunsmith who could do an action job? Preferably in MN or close by. Or maybe I'll try just wearing it in?

Just reading thru here and noted the comments on Ruger and wanted to add my own...

I recently purchased the M77 Hawkeye African in 416 Ruger and haven't had an opportunity to shoot it. I researched around a bit on the rifle and caliber but kind of skipped over the bad reviews as people getting one of those "Monday/Friday" rifles as I haven't had nothing but good luck with Rugers. I have hunted all over Alaska in all kinds of weather/conditions with either a No.1 or a M77 (both in .338) and have not had any issues in the field or the range with ammo or performance. My luck has included an inherited basket case No.1 in .270 that I sent in and Ruger did a total rebuild for next to nothing and in a very expeditious manner (They even replaced the butt pad with an original 70s red pad). I was very pleased with the results and continue to support Ruger firearms.

I am so looking forward to being off work and putting some rounds down range on the new .416 Ruger and possibly squeezing it in on a fall black bear hunt.

+1 on the Ruger Fan.....Between my father and I, we own 7 Rugers (2 redhawks, 1 blackhawk, 300 Win Mag M77, 6.5 Creedmore M77 Hawkeye, 270 and a 20Ga Red Label) and love them all. I use to own a P89 until someone wanted it more that I did. He better hope I never find him!
Either way, I have had nothing but great service and will continue to recommend Ruger as a great buy. There are others out there, but in my opinion, Ruger is one of the best.
L

The 416 Ruger Alaskan that I recently purchased is an earlier model, without barrel band sling attachment. I was so excited to find one, I never noticed until just now. Oh well, I can live with this, or have an aftermarket put on. No real issue either way.
From the labeling on the box this rifle was some type of show sample. Again no issue. The great thing is, it feeds fine with the 400 gr DSX. Probably not as slick as a M70 375 H&H, but maybe not far behind a M70 416 Rem mag. But, I felt sure after cleaning and some cycling it will be very slick as to the feeding. Hell, I may even be able to live with this rubber stock, if I can get the LOP reduced a tad and a Decelerator put on it. The fit of the barrel channel is much better than some of the 375 Alaskans that I replaced the stocks on.
Now, if it groups well; I shall a ver happy camper. I will be separated from it for a couple of weeks. But plan on mounting a lower powered scope on it and running some factory loads through it. And optimistically hoping to reload some 300 and 350 grain TSXs for it.

It is all about cycling rounds through this thing to get it right. I am a Ruger fan. I have 4 and love them all. The 416 Guide gun just got the work done on my last hunt.

Our Ruger bolt guns. I'm loving the laminated stocks and how each one comes out a little different. And they feel really good in the hands.

First one is my wife's Guide gun in 30-06 with VX3 2.8-8 mounted low with Ruger #3 and #4 rings. There is a little shadow of the sight at the bottom but that is how Ann wanted it. She took her 5 critters with in Africa with it.

The other two are still topless virgins. In the middle is Ann's 375 Guide gun and then my Predator in 6.5 Creedmoor. These 3 and my M70 375 H &H w/VX6 2-6 illuminated will likely be making it to Africa on our next trip.
I've got to choose between a Swarovski Z5 in 3.5-18 with the reticle 4 with the little windage lines or a VX6 3-18 illuminated and CDS for the Predator... Plan to use it mainly on Pronghorn and small PG. Hoping it also shoots well enough to be a good long range gun.

I have not been able to get Ann to go look at scopes yet for her 375 but intend to try and convince her to go with a 30mm illuminated Leupold. I'm a little afraid she will want to go with that same little 2.5-8 in order to keep it mounted really low. Great scope for the money but I think we can do better. 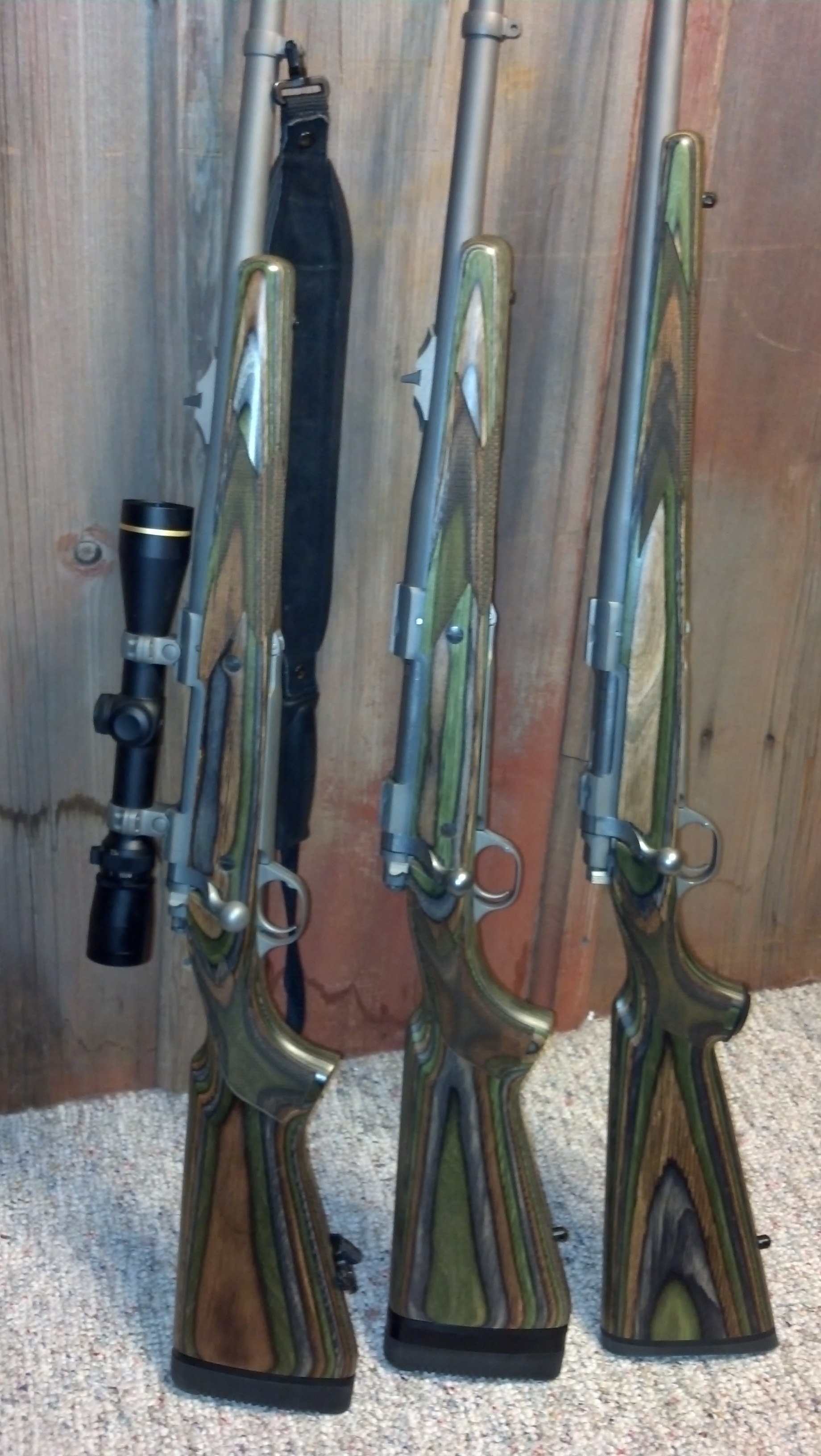 What a great looking line up of rifles there friend
You must log in or register to reply here.