TOBY458 said:
THREE SEVEN FIVE.....THREE SEVEN FIVE.....THREE SEVEN FIVE. That's all I hear about these days! And for very good reason! It's the most versatile rifle a man could carry in Africa, and around the world, for that matter. It can't be beat for a pure do it all, big and small, type of weapon.
But, for those of us that spend our days dreaming of hunting large, tank like beasts, there is cause to think of something larger. As in something over 40. Which also reads.....450/400, 404 Jeffery, 416 Rigby, 416 Rem Mag, 416 Ruger, and if you must, 416 Weatherby.
Pure Buffalo rifles, if you will. No one can muster up much of an argument that more is needed for anything other than Elephant, and even then, one could make a strong argument for the 40 something crowd. With their high SD bullets, and relatively flat trajectory, there's not much that can't be accomplished with a 40 something.

Sure, a 458 or larger may hit harder, but they also hit harder on both ends. It is said that 2300-2400 FPS is the magic velocity at which the best penetration takes place on large animals, so if a 500 grain or heavier bullet is pushed at those speeds, the recoil begins to push above what most mortals can handle. It takes major practice, and concentration to shoot these rifles well.

This leads us right back to our 40's. A 400 grain,.410-.423 caliber bullet, at a velocity of around 2200-2400 FPS is amazingly effective on large, dangerous animals, while maintaining a recoil level that most people can handle with practice. It also boasts a SD of around .330, so penetration is off the charts, as well as having a trajectory that makes longish shots feasible. What more could one ask for?

Fourty something rifles come in all shapes and sizes. From double rifles, to custom built Mauser style safari rifles, to affordable production arms. All levels of income can be accommodated. One can take a rather inexpensive Ruger M77 in 416 Rigby, or 416 Ruger, and hunt any large game the world has to offer. However, if you wish to hunt with a little more gusto, the Heym Express Martini in 404 Jeffery and 416 Rigby, or any number of other custom or semi custom, double rifles or bolt guns might just fit the bill. You can spend hundreds, or thousands on a rifle, it's all up to your sensibilities. But, either way, if it's in the 40 something crowd, you will be well and truly armed, if you make sure to work any possible bugs out before the hunt.

In the end, the good ole THREE SEVEN FIVE might hold the title of King Or Queen Of Africa, (you decide which one). But for those that want just a little more, welcome to your 40's. It's all down hill from here.
Click to expand...

I took my buff and ele with a .416 Ruger. I agree that .375 is good but a bit more gun for buff is better.
I agree with much of what you’ve presented here. Great discussion!
Philip

Man I love the forty somethings & glad I'm not the only one feeling this way!

I seem to have missed where the .375 has been bashed in this discussion.

I have had the greatest of pleasure with my .404 Jeffery this past season. Buffalo, Hyena, Eland, Giraffe & hoping to add crop raiding hippo & a lion to the list if all goes well later this year.
Recoil from this gentle Large bore is anything but unpleasant or unbearable, but its effectiveness is legendary!

Man I love the forty somethings & glad I'm not the only one feeling this way!

I seem to have missed where the .375 has been bashed in this discussion.

I have had the greatest of pleasure with my .404 Jeffery this past season. Buffalo, Hyena, Eland, Giraffe & hoping to add crop raiding hippo & a lion to the list if all goes well later this year.
Recoil from this gentle Large bore is anything but unpleasant or unbearable, but its effectiveness is legendary!
Click to expand...

What velocity do you load the Jeff to?

TOBY458 said:
What velocity do you load the Jeff to?
Click to expand...

Since I got the rifle, I tried some factory ammunition as a trial & got immediate satisfactory groupings.
Ive played around with the 400grn Rhino soft points and local SA powders in the 2200fps region, groups well.

But ultimately for all my hunting I settled on the factory Norma African PH 450grn SP's at 2150FPS ammunition as it groups great & has excellent performance on all I have taken thus far.
C

AES said:
Honestly, that line-up doesn't make much sense. It's like taking the reverse of what makes sense and is duplicative to your detriment. That said, if you just want to blood-in both of the rifles, I am sure it will be a ball.
Click to expand...

I would agree with you if I was after a lot of smaller plains game on this hunt. This trip is for a second cape buffalo, a golden wildebeest and a roan. The 375 double is for close quarters in the thick bush. The Rigby is scoped and can be used on all three depending on what shot is presented. On previous hunts that included smaller plains game I took a scoped M70 300 winmag along with the 375 double. Besides, the 375 double is just a lot of fun to hunt with!

Aussie_Hunter said:
You wont be disappointed in an R8!
Click to expand...

spike.t said:
There are two R8 that have never interested me....one made by blaser and the other by Audi....
Click to expand...

That is because there is no accounting for taste.
"We sleep soundly in our beds because rough men stand ready in the night to visit violence on those who would do us harm" American Novelist - W. Churchill

Red Leg said:
That is because there is no accounting for taste.
Click to expand...

I will take that to mean I have superb taste then...

Stock standard .416 Ruger with a 1-6x24 Swarovski Z6 on to to anything, especially in poor weather.

With a 400 gr bullet leaving them at respectively 2300fps and 2170fps they both penetrate through buffalo or giraffe, which is more than enough for me. 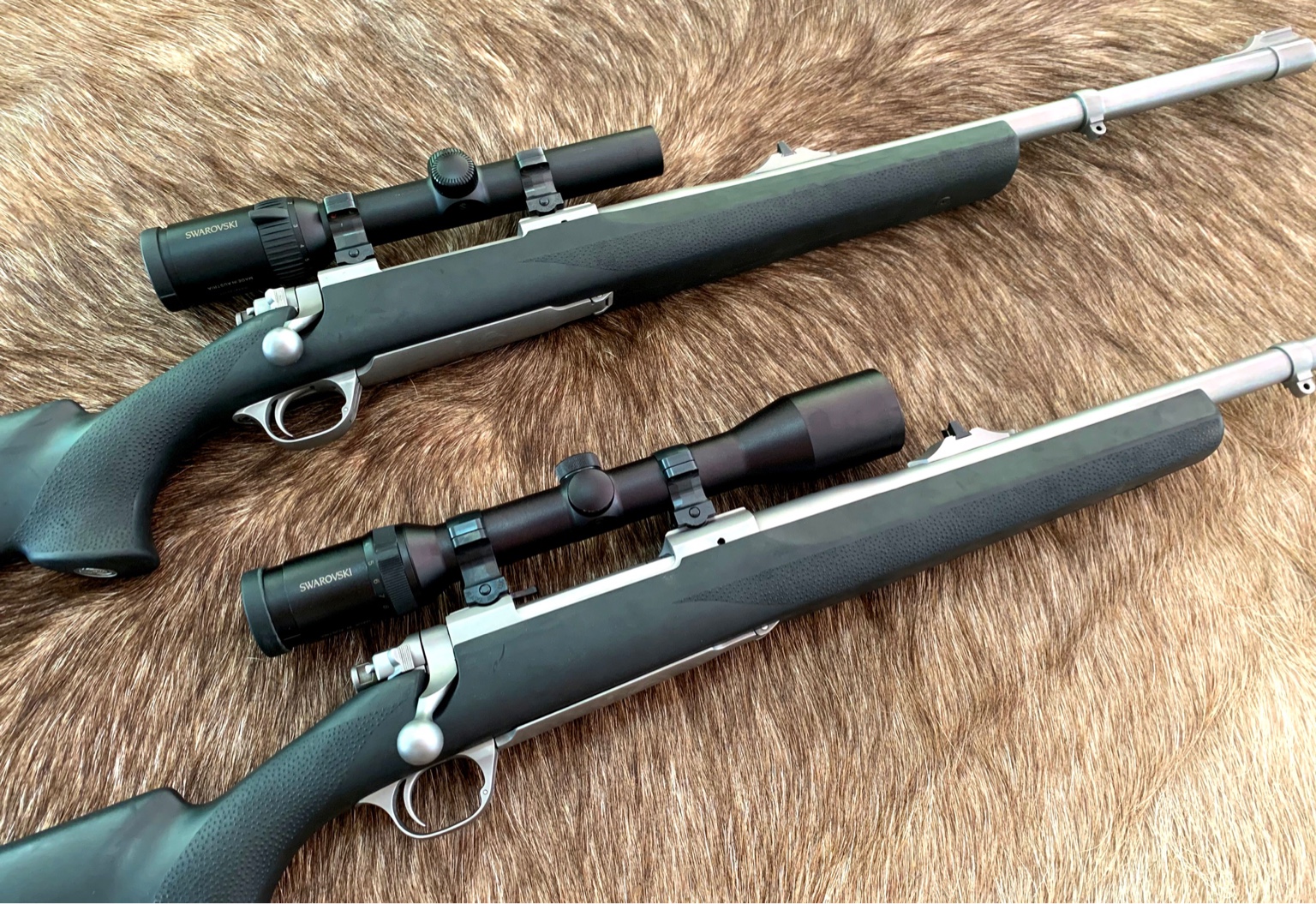 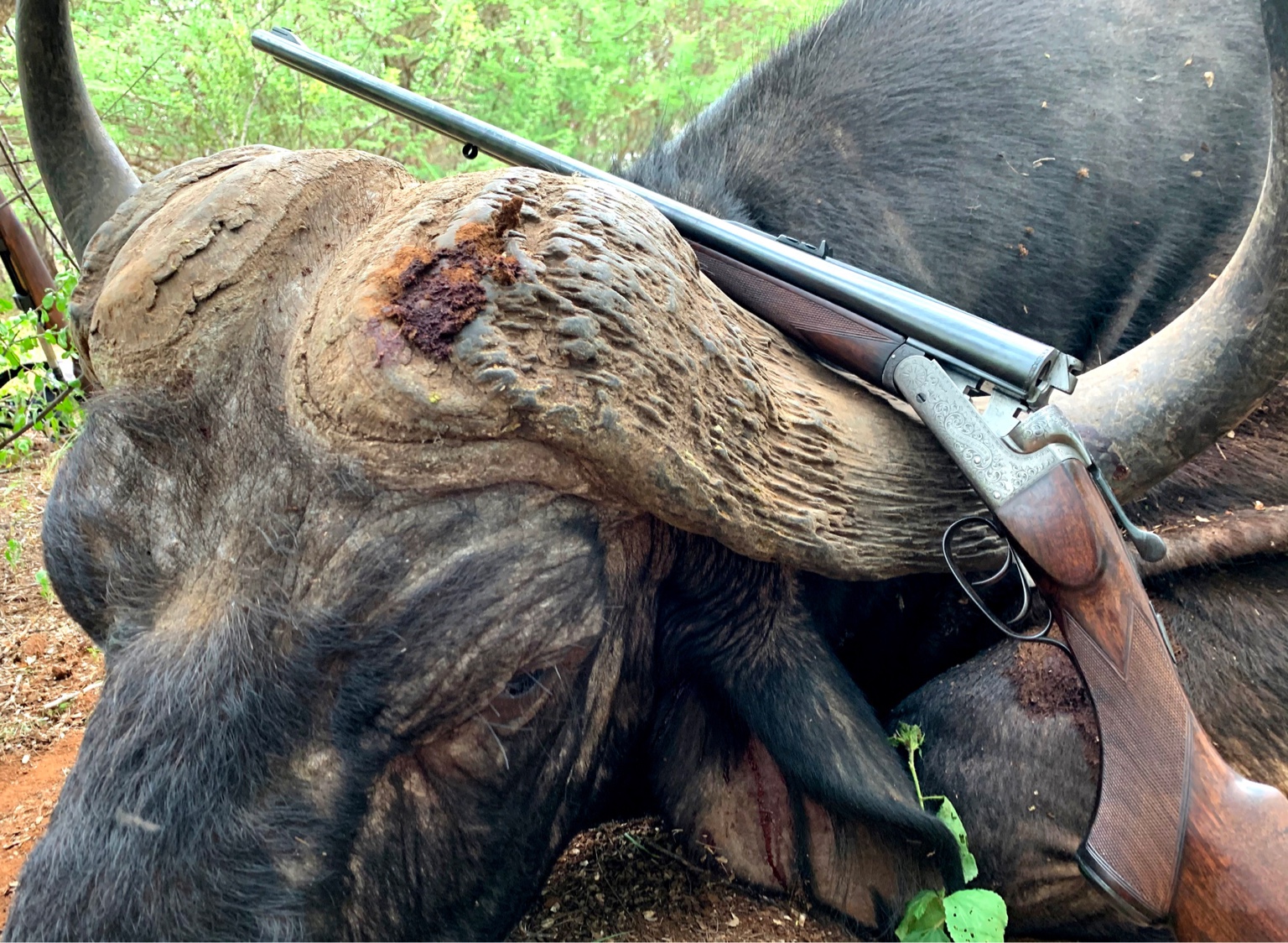 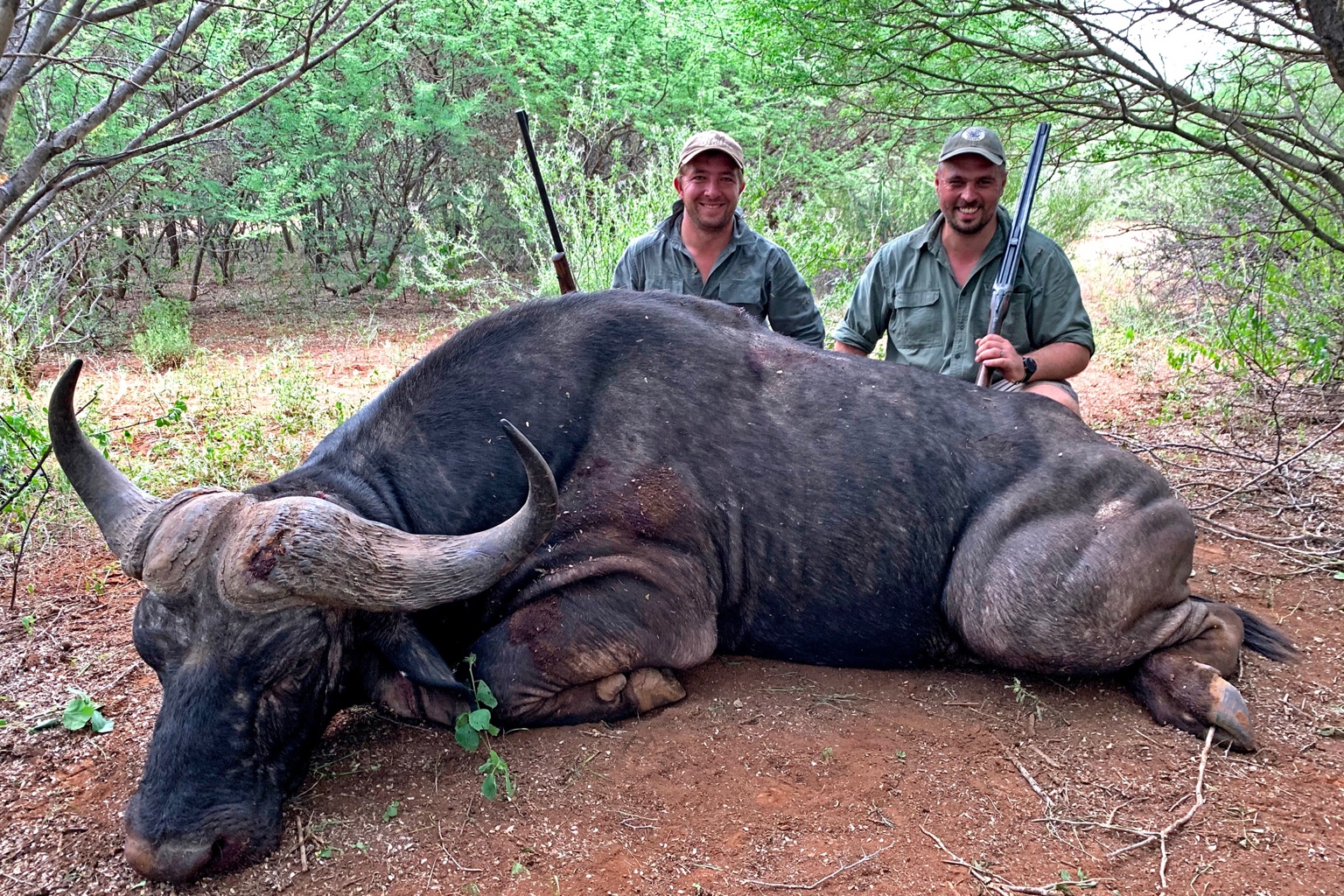 "I love sleep. My life has the tendency to fall apart when I'm awake, you know" - Ernest Hemingway

Stock standard .416 Ruger with a 1-6x24 Swarovski Z6 on to to anything, especially in poor weather.

With a 400 gr bullet leaving them at respectively 2300fps and 2170fps they both penetrate through buffalo or giraffe, which is more than enough for me.

Jfet said:
That would be like the calibers @Redleg shot in his youth. Probably a 155mm.

To the credit of the young man playing in the secondary he never hesitated or backed down. Which is the purpose of the "Oklahoma Drill" or "Shotgun Alley" that is used in American football to deliver a blow or take a blow. I have coached young me who were 12 and 13 years old in that drill and the first time they got hit they laid down and cried. 5 years later they are delivering a blow. Getting used to shooting the 40's is much the same principle. We have to get used to it. It takes practice and it is going to hurt. However, over time you get used to it and they are fun to shoot.
Click to expand...

If you need a gun to help speed up getting used to recoil I have a 10ga single shot that with turkey loads kicks harder than my 458 win mag haha
-"You don’t hunt turkeys because you want to; you hunt turkeys because you have to." —Tom Kelly
-“Look deep into nature, and then you will understand everything better.” — Albert Einstein
-"Accept the challenges so that you can feel the exhilaration of victory." George S. Patton

I love it. It’s probably worth more than the rifle. To be fair the two rifles had some work done. Triggers down to 2 pounds. Filler foam in the butstocks to get rid of the hollow clanging. Pachmyer old English pads on both Rugers. They are harder, but shoulder significantly smoother, without snagging a shirt, like the original hogue pads do. Rails, ramp and action polished butter smooth. Horrible bead-blasted finish on metal smoothed out with 0000 steelwool to a nice patina. Takes about 3-4h per rifle to sort all of that out.

Obviously the double is shot opensight. The .416 Ruger comfortably shoots 350gr Swifts and 400gr Dzombo solids with 3 shots touching. Ive stretched her legs on a few occasions well over 250m (282 and 340 come to mind) and the clear glass the Swarro offers makes that posible at 6x magnification.
"I love sleep. My life has the tendency to fall apart when I'm awake, you know" - Ernest Hemingway

The 416 Remington is actually more versatile than the 375, with 300 and 350 gr. bullets for all pG and ok in a pinch for buffalo and other DG but only if you can handle the extra recoil, otherwise one is better off with a 375, but anyone that can shoot a 375 should be able to shoot a 416, id think! However its mandatory that every hunter knows his recoil liment as to recoil, be honest whith yourself, That said there are no flys on a good old 375 H&H or Ruger.. 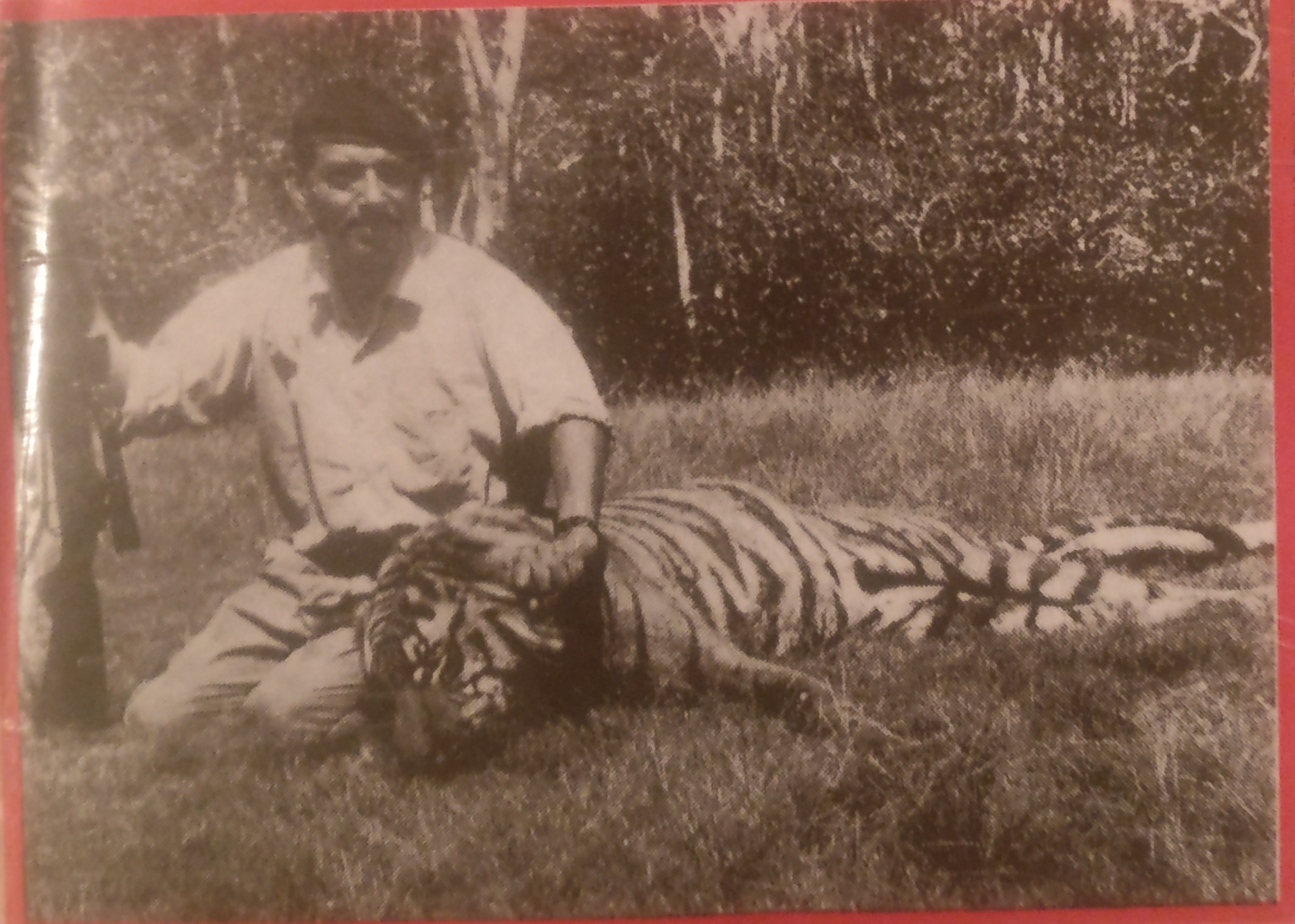 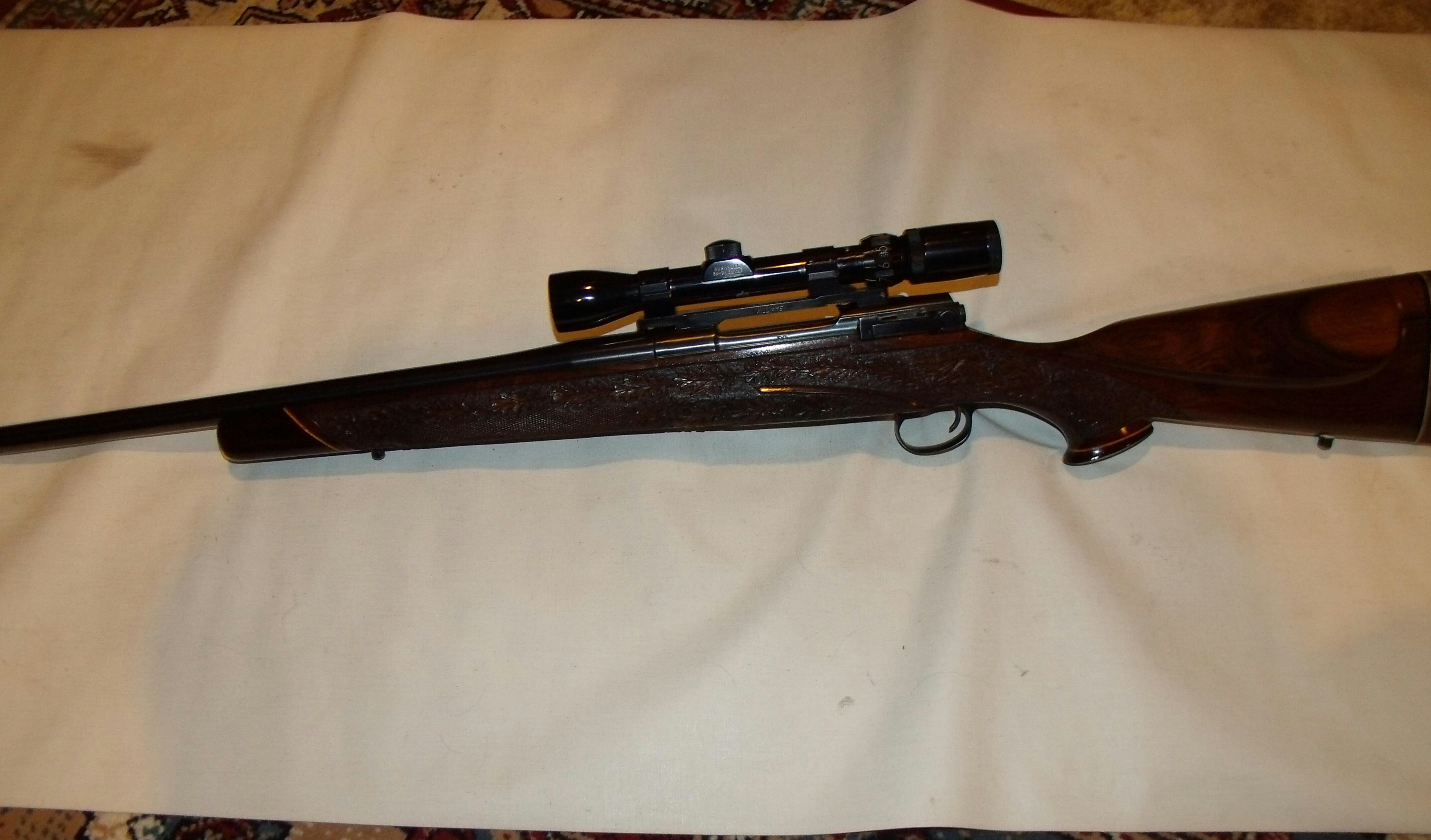