Are the Victoria Falls a must see?

Mark-H........not surprising that the statue of De Lesseps would be gone....considering that statues of Teddy Roosevelt and Abe Lincoln were removed or defaced in the USA by Woke snowflakes. But back to Vic Falls....I found the area to be clean and well kept, by Africa standards, at least. So nice to see considering how many African tourist attractions have deteriorated over the last two decades.......Taking the train from Pretoria to Vic Falls is a great way to start a hunt................FWB

We offer hunts out of Matetsi Safari Area, Unit One which is less than an hour out of Victoria Falls and every one of our clients that we have taken there has been impressed. Of course I am biased but I think definitely worth the visit!
My family visited it last week and had the most amazing time especially that they had the whole place to themselves!
I have also attached a document that summarises our situation in comparison to other countries in the world right now. Zimbabwe is definitely one of the safest destination to travel to right now!

flatwater bill said:
But back to Vic Falls
Click to expand...

My long term plan is to visit Vic Falls! definitely! And checking google pictures of Victoria falls hotel, I am very impressed! Taking the train is great idea!
M

Tromberg Hunting Safaris said:
Zimbabwe is definitely one of the safest destination to travel to right now!
Click to expand...

What is the protocol for visitors already having covid vaccination?

buck wild said:
Trying to get a trip together this summer and if we do a side trip to Vic Falls after the hunt it is throwing a wrench into our travel plans coupled with the Covid testing restriction returning to US etc. I'm normally not a tourist site kinda guy anyway. Is this a must see attraction ?
Click to expand...

mark-hunter said:
What is the protocol for visitors already having covid vaccination?
Click to expand...

No change Mark, at least not yet. It is quite easy though - you should arrive within 48 hrs of having got a negative test, but if that expires they have a test facility at Harare airport.
Carruthers

WAB said:
I should add that my wife and I are confessed wine junkies. We have toured wine country in Italy, Argentina, California and South Africa. South Africa is our favorite. They have some unbelievable wines that never find their way to North America. The country around Stellenbosch is stunning. If you like fine wines, great food and amazing accomodations it should be on your bucket list. I believe that you could fly to RSA and spend a week in wine country cheaper than you could fly to California to do the same thing.
Click to expand...

Yes Cape wines are spectacular WAB, especially Life From Stone and Iona. A glass of either of those with a bowl of Luderitz oysters is worth the trip in itself.
Carruthers

The majority of our clients arrive and depart the Victoria Falls airport, 20 minutes from Victoria Falls.
About 1/3 of our clients have the time to visit the Falls. I have never talked to one that was disappointed, but most added "been there done it"! Seeing the falls and the rainforest usually takes about 1 hour. If you have activities planned you can make quite a day (or more) out of it.

The "Three Monkeys" is a great pub and has good food and good for people watching! Most of the other sites have already been mentioned.

Right now the town of Victoria Falls is a Ghost Town, only hotels are allowed to have sit down dinning and drinks. Hopefully this will change soon. The Victoria Falls "tourist police" do a really great job of detouring the street venders and the beggars, they should be commended!

All and all it is really worth seeing at least once, especially if you have some one to share the experience with.

mark-hunter said:
Speaking about pyramides - they are great indeed. A must see!

But in order for prospective tourist to get entire picture, when passing though Cairo, there are small canals adjoining to Nile.
Those canals are full of plastic bottles, plastic bags and similar non degradable garbage.

On approach to pyramids, there is a possibility for touristic ride on camel, a local enterprise consequently creating one of the largest collection of camel shit in north Africa.

At last, that was the situation when I was there few years ago.
It is really shame, considering the pyramids are one of the 7 wonders of the World.

And there is a Suez canal.
We all know about it.
As a memorial to French who built Suez canal, a 10 meters bronze statue was built, on the entrance of canal, welcoming the ships and passengers entering canal.

Unfortunately, not any more.
Deliberately blown by explosives in the fifties, during the Suez crises.

Interesting response towards the man who built the Suez canal, to say at least.
Click to expand...

yes. but panama was finalised by theodore roosevelt.
And Cecil Rhodes was contempating buliding a rail road from south africa to cairo, transontinental
Thinking about this, what a generation of great men!

ABOSLUTELY!
We were there in 2013 after a ten day Nambia PG hunt, two week road tour through Namibia, Sossusvlie, Damaraland, Etosha, Caprivi, Chobe and finally Vic Falls and flew home out of Vic Falls. Worth every minute of out time. The only complaint I have about Vic Falls is the persistent hawkers trying to see their carvings of the Big Five. Finally to put them off I told them that I already had a set in black, but would really be interested in a set in blue. When I told them of my request they all took off looking for some. I don't know how may sets of blue coloured carvings are there now as we left the next day. On the second last day there we came across a local artist that was working on a pencil sketch of the Big Five. He was only about 50% completed at that time but because my wife liked it so much, she asked him when it would be done as we were leaving the next morning. He assured her that it would be completed by 7 am the next day. It was and it now hangs in our living room. A one of one. One of our most cherished souvenirs of our month in Africa.

I’ve not been but I would like to someday. I am usually focused on hunting and rarely ever do touristy things.
Philip

So by what we are seeing so far, it does look like Victoria Falls is going reach one of its highest levels in history.

When the Falls are that full, it becomes almost impossible to see them through all the rising spray but the sheer power of all the water cascading over such a large chasm in indescribably breath-taking.

Living so close to the Falls I've seen them many times and every time is a unique experience depending on the water levels. Yesterday was something special! With the water so high we got gloriously soaked to the bone! Being saturated like that by Zambezi "rain" was an unforgettable experience. The spray was tropical, the sun was hot and we were still able to see the Falls. 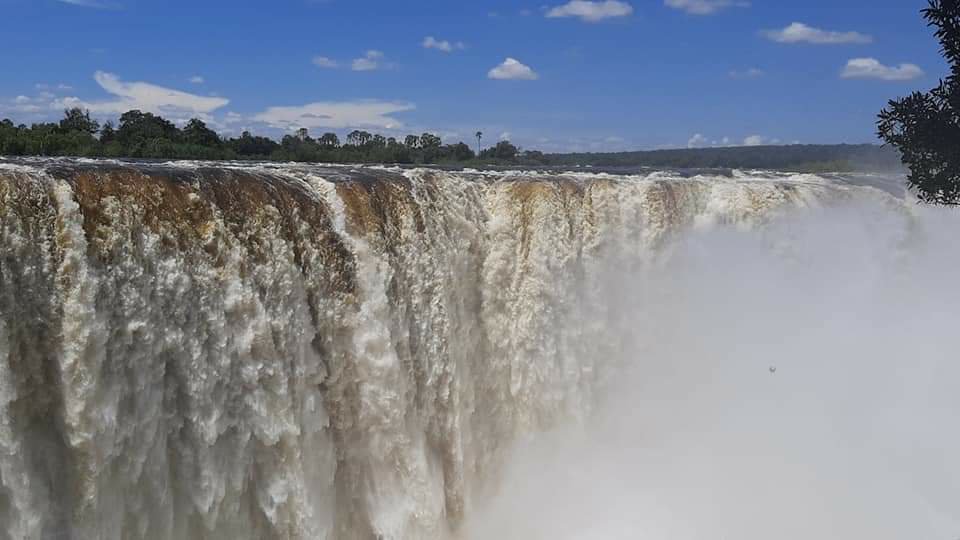 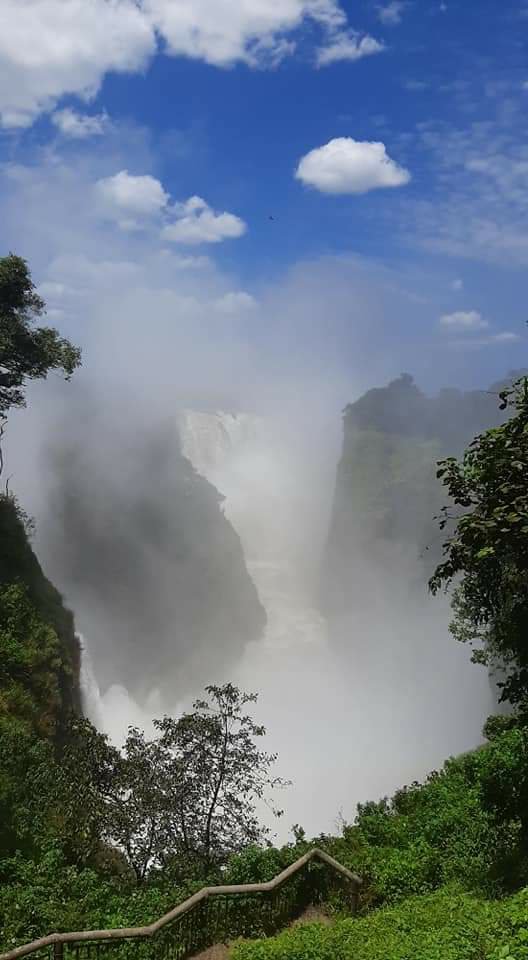 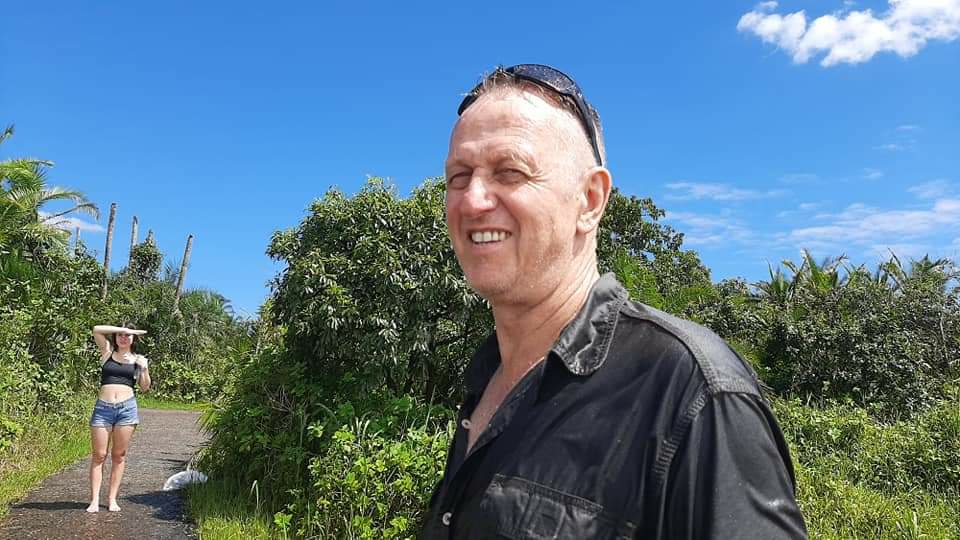 I like to stay at the Elephant camp at Victoria Falls. Great romantic place, last year girlfriend was going to join me there after my hunt. This year it is not practical due to multiple Covid tests that would have been required.
You must log in or register to reply here.

How Are Airlines Flying During Covid-19?

Is Zimbabwe Open for Business? Yes