As a die-hard classic-rifle fanatic, to me the pleasure of hunting is largely in taking my favorite weapon on an adventure.

I have my dream large medium bore in the form of a falling block single shot in .375 H&H flanged, topped with a crystal-clear 6x Zeiss scope. This one has relegated all my other hunting rifles to the gun cabinet, pretty much permanently, also because I can use it to hunt virtually everything that walks anywhere on Earth.

However, the pleasure of "hunting" for another rifle is still there, which is why I'm thinking of building my equally-ideal medium/smallbore rifle. I used to have a .333 Jeffery bolt with a 2x Lyman scope, which I foolishly traded in for an antique book, and I'm still kicking myself for it.

I don't need a screamer caliber, since another pleasure of hunting for me is to get close to game. I have seldom taken a shot longer than 300 yards. Weight is also not that big a deal, since I'm still relatively young and fit. This rifle would be for deer or (at most) elk sized game at the moderate distances I've described, and ideally I would outfit it with a scope, if it didn't already come with one.

Any advice (whimsical or otherwise) from fellow rifle-fanatics would be greatly appreciated.
R

I've spent a lot of time with the 7mm mauser and the .318... Love them both. I'm a strong believer that one can never be over gunned, so I would say go with the .318... It was also the first rifle I used with open sights and I will never forget it. Solid push, no smack and seriously lethal.

If you are not opposed to putting a few scratches on that new Rigby, I'd go with the HS 275.
“They that can give up essential liberty to obtain a little temporary safety deserve neither liberty nor safety.” Benjamin Franklin 1759

Great group of calibers. As I have noted in other posts, I love my Highland Stalker. It is scope ready from the builder, including being drilled and tapped, and most importantly, having proper drop at heel to effectively use open sights or a scope. A golden age Rigby will be designed for open sights, so you will have to accommodate your shooting style somewhat to scope it. That is true of any pre-war rifle - some more than others. A lot of Mannlicher Schoenauers have been butchered by shade tree gunsmiths trying to scope them. Claw mounts are the best solution. I know exactly one person in the States who I would trust to install them, and they are not cheap (though total investment would be less than a Rigby of any era). There are a lot of pre-war Mausers floating around this country, many in 8x57. American troops “liberated” thousands. If you go that route, take your time. A lot of them were abused, and remember it is likely to be a .318 bore (not to be confused with a British .318), which can complicate reloading (a lot). I love my two rifles chambered in .318 WR. One is an actual WR takedown, and the other is a Cogswell & Harrison built on a P14 action. Virtually all British 318’s are rifled to shoot best the classic 250 gr load. That is no limitation to me - it is deadly - but not a long range option. And of course, ammunition is a challenge. But from a coolness perspective, it will be a centerpiece of any campfire discussion you ever have while hunting it.
"We sleep soundly in our beds because rough men stand ready in the night to visit violence on those who would do us harm" American Novelist - W. Churchill

As you have a highland stalker as an option, that puts a many fine pre-owned rifles within your budget. The decision is the killer, yet not a bad problem to have. .318 WR would be a wonderful medium bore, excellent for elk in the timber with the 250. The 275R is in my opinion about perfect for deer sized game and I have seen quite a few elk fall to one, but light in my opinion for elk.
Please let us know what you end up with.
Cheers,
Cody
"Montana seems to be what a small boy would think Texas is like from hearing Texans" John Steinbeck

Why limit yourself, one of each!

6.5 Creedmore is a good round but wouldn’t the 6.5x55 be a more classic option? Great accuracy and if I’m not mistaken a bit hotter than the creedmore.

If you are going the 6.5 route then the 6.5x57 would be the way to go. Mine runs the 140gn bulletto 2800fps and the 120gn bullet to 3000fps within a 57k psi limit
Like the 7x57, the 6.5x57 Mauser is based on the M/88 8x57mm case. Information regarding the development of the 6.5x57 is scarce however the suggested year of introduction, 1890, occurred at a similar time to Mauser’s involvement in attempts to develop a 6.5 caliber rifle for the Italian military
The 6.5x57 never saw military service although research no doubt helped later in the design of the military 6.5x58 Portuguese Mauser.
https://www.ballisticstudies.com/Knowledgebase/6.5x57.html

I recently saw a highland stalker in 9.3x62. That would be an interesting rifle.

It sounds like you like falling block single shots. Have you thought about a Dakota Model 10? I’m having one built in 9.3x62 right now. I’m really looking forward to it.

Red Leg said:
... A lot of Mannlicher Schoenauers have been butchered by shade tree gunsmiths trying to scope them. Claw mounts are the best solution. I know exactly one person in the States who I would trust to install them, and they are not cheap (though total investment would be less than a Rigby of any era). There are a lot of pre-war Mausers floating around this country, many in 8x57. American troops “liberated” thousands. If you go that route, take your time. .
Click to expand...

Thanks, Red Leg--much of what you say mirrors my thinking. I have found a M-S 1903 takedown in really good shape, factory-scoped in the correct, "skewed" claw-mounts and British-proofed. While the price is attractive, the scope is mounted with giraffe-neck-high see-through rings, which, together with the already prominent drop at heel, is a rather substantial point against. Also, I have heard of extraction problems in this particular system--although I haven't been able to verify them.

... There are a lot of pre-war Mausers floating around this country, many in 8x57. American troops “liberated” thousands. If you go that route, take your time ...
Click to expand...

The irony is that I do have a Mauser--1919, made in Germany before the factory equipment was shipped to France per postwar treaty terms. It's a 21-inch barreled 8x57mm and it slugs at .323, but it has also a couple points against. 1) The fore-end has several repaired cracks, one of which just ahead of the receiver is visible even in the picture; this makes me wonder about banking on its strength while on an expensive hunt. 2) It has no provision for a scope and has a lovely engraved pattern where the bases would go. Since you can usually find a decent one for </= $3K, my inclination is to do what you recommend--take my time and get another one already correctly scoped when I find one. 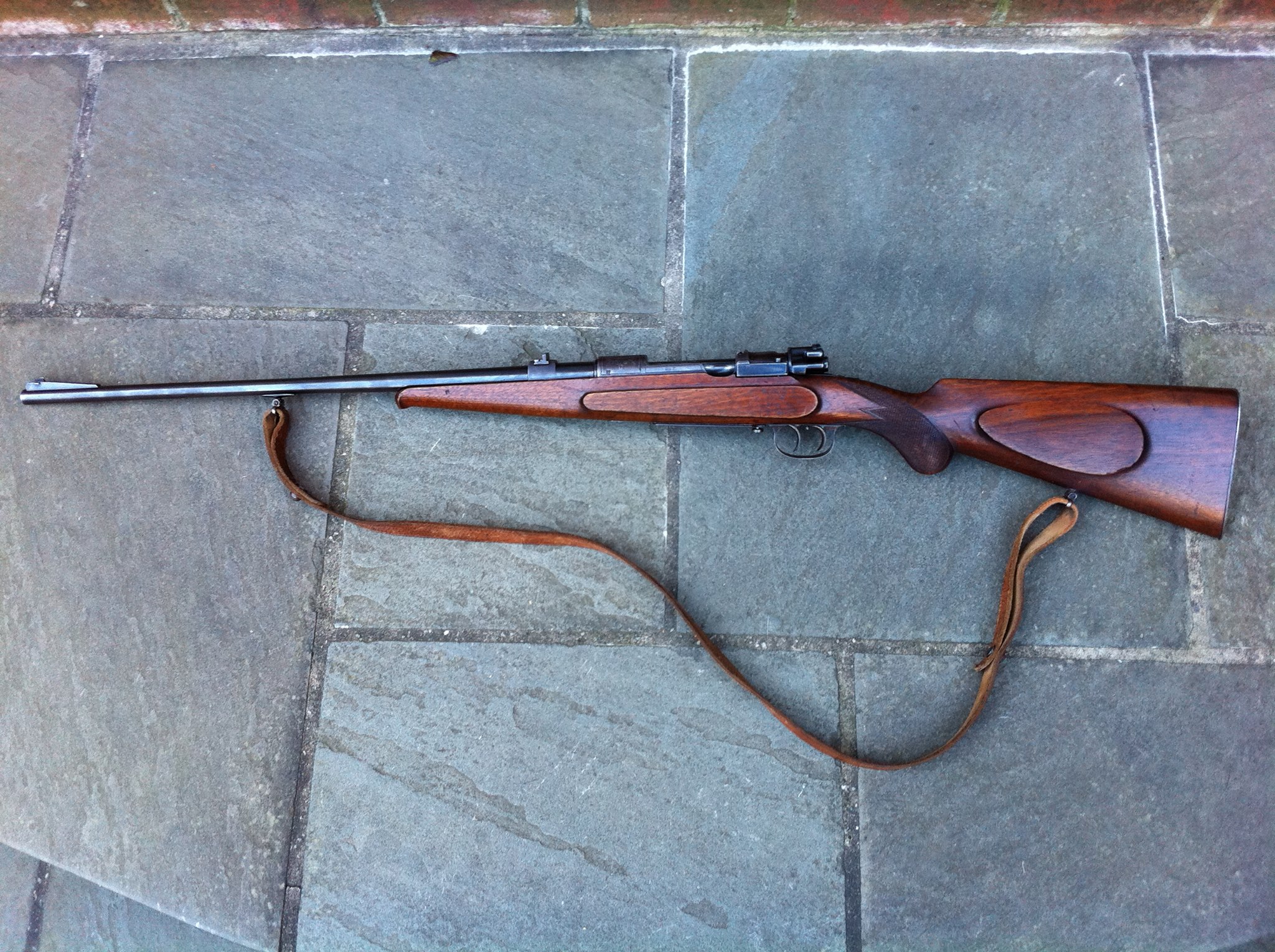 ... I love my two rifles chambered in .318 WR. One is an actual WR takedown, and the other is a Cogswell & Harrison built on a P14 action. Virtually all British 318’s are rifled to shoot best the classic 250 gr load. That is no limitation to me - it is deadly - but not a long range option. And of course, ammunition is a challenge. But from a coolness perspective, it will be a centerpiece of any campfire discussion you ever have while hunting it ...
Click to expand...

I think your helpful post has tipped me over the edge. I still lament the self-inflicted loss of my .333, and perhaps acquiring a .318 that I can shoot and enjoy would be the best soothing balm short of lucking into the rifle I sold. I'm also heartened by the ease with which brass can be made from .30-06 cases, as well as the availability of good .330" bullets from the likes of Hawk's.

I will display my ignorance as I am not familiar with these cartridges, if you had such a great experience with the .333, why are you looking for a .318?

Hi, WAB--only because it is a lot easier to find a good used .318 at a price that won't break the bank. In all honesty, there's not much to choose between them performance-wise, as they both throw very heavy-for-caliber bullets at decent non-magnum velocities. Also, both have the "romantic" allure of the good old days of yore. I only lament my .333 because it is the one thing I sold in my whole life that I regret the most. I'll never see another one like that--especially not at that price. Had it been a .318 I would regret it as much, only it may be easier to replace.

Good luck in your search! You and I enjoy the same taste in rifles.

Thanks, WAB--I'll post my findings as soon as I make my final decision.
You must log in or register to reply here.